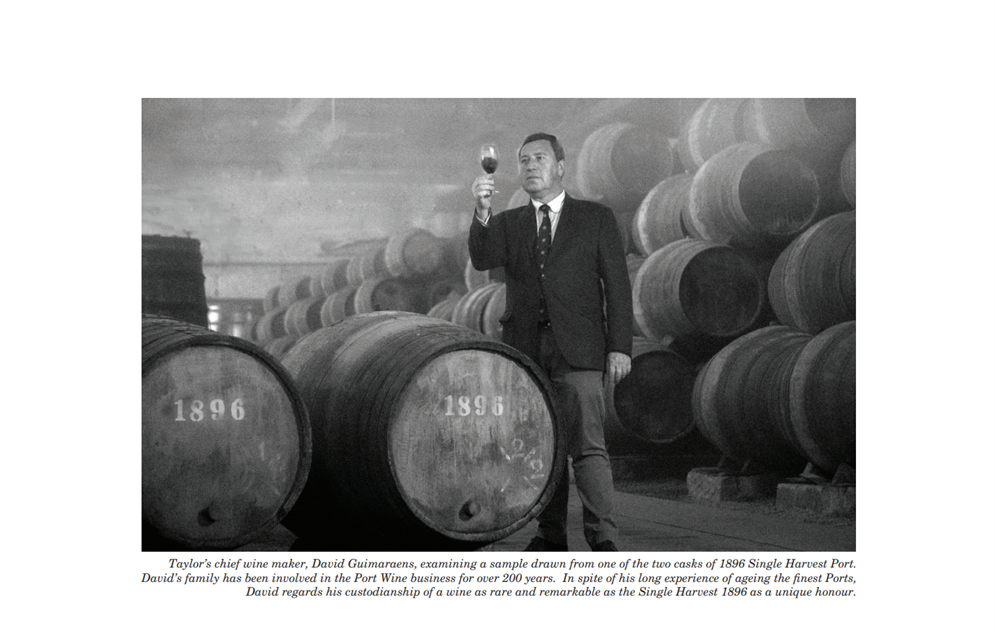 Taylor’s led the charge for limited edition luxury-positioned Very Old Tawny Ports, launching Scion, a pre-phylloxera Tawny from 1855, followed by  Taylor’s 1863 Single Harvest Port.  Now comes Taylor’s Single Harvest Port from 1896, which the Port house describes as “one of the finest of the 19th century.”  It is suitably potent.

The two last remaining pipes of the 1896 came into Taylor’s possession when The Fladgate Partnership acquired Wiese & Krohn in 2013.  Only bottled in this Very Old Tawny Port’s 125th year (this year), the concentration (by evaporation) should come as no surprise.  But it is remarkably fruity still, with marvellous acidity to carry the fruit and layers of flavour and aroma over an ultra-lingering retro-nasal palate.

As David Guimaraens observed in a press tasting, cask ageing concentrates everything – alcohol and water, “so it [cask ageing] concentrated original acids and flavours and also the flavours that develop with time.”  One of those ‘flavours’ that develops after time, he added, is ‘vinagrinho,’ – a volatile acidity (in addition to the natural/original acidity) that enhances the balance and complexity.

Lifting the extent of evaporation vividly off the page, the winemaker estimates that you would need to start out with 18 pipes of Port to end up with just two after 125 years (based on an average 2% cumulative evaporation/annum).

Beyond the concentration, complexity, viscosity and balance, Guimaraens singled out the clarity of Taylor’s 1896 Single Harvest Port. “How clean and fine it is is what I appreciate most…perfection,” he said.  I could not agree more.  I did not detect a scintilla of white noise  – the dustiness, dirty wood or attenuation which you can find with wood-aged Ports.  Incredible given its age.  The acidity is assertive, but it is not elbowy.

The Taylor’s 1896 Single Harvest Tawny – made in the same year Taylor’s acquired Quinta de Vargellas – will be presented in a bespoke decanter of Scottish crystal and an elegant luxury cherrywood case. It is offered on allocation to select collectors and connoisseurs of rare wines and spirits around the world.  Each box contains a certificate personally signed by Taylor’s Managing Director, Adrian Bridge.

Emphasising how very special it is, Bridge and Guimaraens both commented on the rarity of Tawny Ports which have the legs to age for so long and the balance to fly solo (as opposed to being blended for 10, 20, 30, 40-year-old Tawny Ports).  Bridge also pointed out that, since many aged Tawny Ports were not registered with the Port Wine Institute, they cannot be released as Single Harvest or Colheita Ports.

Here is Taylor’s report on the vintage, which produced classic declarations of Vintage Port.  The harvest of 1896 was preceded by a hot ripening season in the Douro Valley. Temperatures throughout Europe in the month of August were among the hottest ever recorded before or since, with the heatwave causing fatalities as far north as Königsberg in Prussia. There were also heatwaves of historic intensity in the eastern United States and in Australia. As a result of the hot summer conditions, the harvest in the Douro Valley began much earlier than usual at the beginning of September. Contemporary accounts describe the crop as being in excellent condition and reported that the wines continued to gain in depth and intensity over the ensuing months. 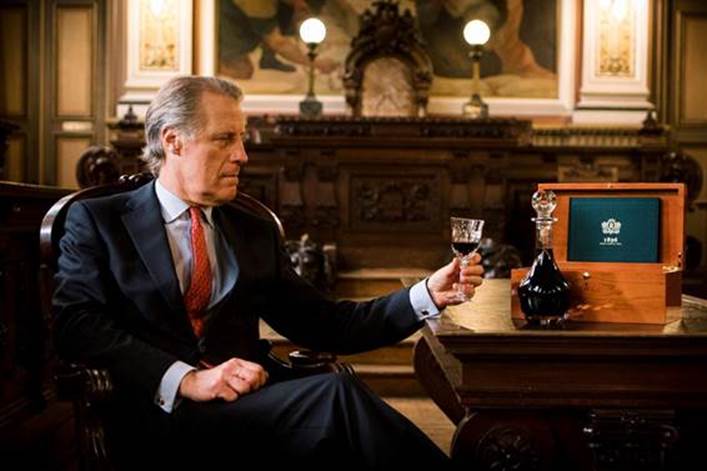 A deep but bright conker (chestnut) hue, with saffron and olive notes to the rim.  The nose is rich and enveloping, with orange peel-edged medjool dates; striking black cardamom notes offset the dried honey and cinnamon-edged caramelised tatin notes.  Wow, terrific intensity on the attack and going through, with really incisive acidity with ‘vinagrinho’ lift and pace.  Almost scoring the palate (in an attractive way), it makes for an exceptionally controlled delivery and perfect balances the viscous date and figgy Christmas pudding fruit.  Lingering espresso coffee and sweet walnut notes resonate long in the mouth, with figgy pudding and peel notes.  Fabulously mellow, mouthcoating and viscous, yet poised.  Sensational.  Describing it as “a Port essence,” Guimaraens recommends pouring this potent 125-year-old into a good sized wine glass to let the aromas and flavours unfurl.   1,700 bottles (750ml) have been produced; RRP £3,950/bottle

Click on the links below for my reviews of other Taylor’s Single Harvest releases (and an ultra-limited edition 1863 Very Old Tawny Port):