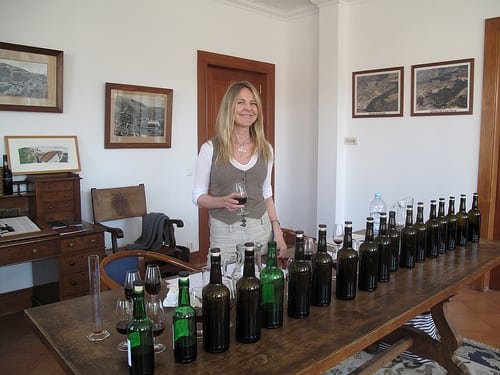 Bridging the generations: the art of blending Taylor’s tawny Port Taylor’s (owned by Taylor, Fladgate & Yeatman), is the brand leader for aged tawnies, so I grabbed the chance to participate in a hands-on 20 Year Old Tawny blending masterclass with Chief Blender, Natasha Bridge (pictured with blending material). She is the eldest daughter of Taylor, Fladgate & Yeatman’s chairman, Alistair Robertson, who inherited the business in 1966 following the death of Dick Yeatman, his uncle.

I sense it’s both a thrill and a privilege for Bridge to work with blending material set aside by her great great uncle and herself to set aside wines for future generations. During the masterclass at Taylor’s port lodge in Vila Nova de Gaia, we too span centuries – the oldest component of our 18 lote/barrel samples is no less than 109 years old! Just a splash adds more than a dash of pedigree.

The art of blending

Bridge has headed up the Fladgate blending team since 2007, when she took over this role from Chief Winemaker David Guimarãens. Deferential about the art of blending, which he defines as “accompanying ports through the ageing process once they’ve left the winemaker,”Guimarãens points out “whatever decision you take has a consequence for the style of port.”

No pressure then, especially when aged dated tawnies must have an average age of 10, 20, 30 or 40 years old. That’s no little hand-holding, during which time Bridge defines the role as“working with the wines to bring out the house style by ironing out the differences between the years and properties.”

To assist Bridge, each house – Taylor’s, Fonseca and Croft – has an individual blender, who keeps an eye on every lote or barrel. Fonseca’s blender joined the house aged 12, working alongside, David Guimarãens’ father Bruce for over 20 years which, as Guimarãens points out, “works well in terms of bridging the generations and maintaining a consistent style.”

For Bridge, who signs off every blend, making age dated tawnies is “an incredible investment,”especially when some 2% of stock disappears into the ether every year, lost to evaporation. As a family business in it for the long haul, she says Fladgate is one of only “a very few”shippers still making 30 or 40 year old aged dated tawnies.

Turning to the process itself, she explains that varietal origin is indifferent. Rather, the process of selection starts each January when the blending team assesses wines from the last vintage blind. Each wine is given an average mark and this, together with its lab analysis, informs its destiny. As far as tawnies are concerned, a wine which might not make the grade for a single quinta vintage port (because it lacks the colour and/or tannins to go the distance), might be a good candidate for a 20 year old tawny. For a 30 or 40 year old tawny, for which Bridge says she’s not putting wine aside every year, it’s likely to have come from a (classic) vintage year. Whatever it’s origin, her role is “to take the lovely fruit and slowly bring it into line by changing its flavour profile completely.” Once wines have been brought into line, Bridge typically selects the final blend from four different lotes.  The lotes are then emptied into a large vat, mixed well and left for 3-4 to “marry” before bottling. So what tools does the blender have at their disposal to effect this alchemy from red to golden tawny? Aside from the different age and provenance of wines, Bridge points to factors such as the location of the lodge where the wines are aged, location of the barrel within the lodge and size of barrel/vat (typically 600l, but larger if it’s necessary to slow down the ageing process). Traditionally, Vila Nova de Gaia-aged stock (pictured) makes for fruitier/fresher styles than Douro-aged wines, which develop faster in this hotter, drier location, developing so-called “Douro bake,” with its sweeter, more dried fruits. However, for logistical reasons (Vila Nova de Gaia’s rat-run of narrow, higgledy piggledy streets are ill-suited to the lorries), there’s a trend in favour of ageing in the Douro in modern temperature and humidity controlled warehouses. Taylor’s now age around two thirds of their wines in this way, enabling them to maintain Fladgate’s fresh, balanced style which, though sweet, finishes dry.

Returning to the provenance and age of the wines, our masterclass gives us an insight into what these factors brings to the party.  Here are some thoughts: Having tasted each of the 18 wines separately, our task was to make up 3 blends based on different permutations of 3 of the samples we had tasted.  Here are my tasting notes for the individual wines:

Here are my notes on the blends:

And just for fun, we made a fourth and final wine by adding just a dash of our oldest component (from the 1900 cask) to blend 3 – a super intense, spicy wine with molasses and buttered caramel. I can tell you a little goes a long way…

Even so we were not allowed to play with the oldest wine present – a 19th century gem – which Bridge’s husband Fladgate’s CEO Adrian Bridge and Chief Winemaker David Guimarãens revealed at the end of our tasting – a bit of a scoop.  Last December, Taylor’s acquired some casks of pre-phylloxera tawny port, dating back to the 1850s.    It’s a rarity and the three could hardly contain their excitement  about it.  Guimarãens says it’s a particularly lucky find because the wine had been stored in the bottom of a house (a relatively cool, dark environment) and, far from being forgotten or abandoned, it had been racked, so the wine is “totally bright,”  a fact to which I can personally attest.

It shows the olive rim of an oldie and, though initially a little “dusty” on the nose, its lifted, spicy, chutney-like fruit soon comes through.  The palate is incredibly intense in its carraway-like spiciness.  It feels almost to evaporate from the tongue (high but good volatile acidity according to Guimarãens, because it’s balanced by sweetness).  But such is its intensity, this wine really leaves its mark – the spice, an impression of thick but dry dark treacle and, of course, a sense of time and history. [Postscript: This is the wine which was subsequently launched as Taylor’s Scion at €2,500/bottle – click here for details].