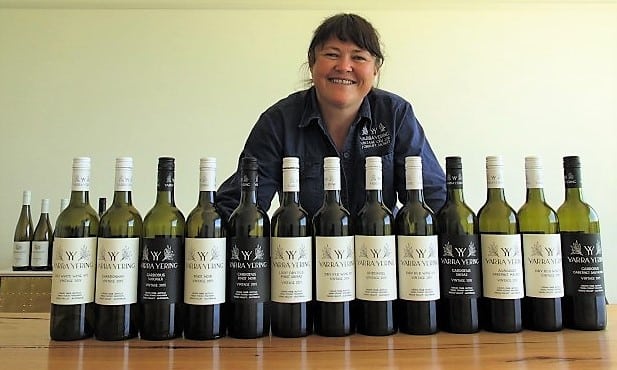 Following on from last Friday’s post about Warramate, today’s report focuses on its iconic sister-label, Yarra Yering.  It was good to re-visit with Sarah Crowe – a member of Yarra Valley Wine Women – who became Chief Winemaker in 2013.  Her take on Yarra Yering,  both sympathetic and fearless, won her James Halliday’s Winemaker of the Year 2017 award.

Below, you will find my notes on the wines, including Crowe’s new baby, a 2017 Semillon.  Evidently you can take the girl out of the Hunter, but you can’t take the Hunter out of the girl….

I could have sat with these complex, beautifully structured wines for an age. While very refined and, in this sense, accessible, they’re tantalising too, because you know there is still so much yet to give.

For an insight into the history, vineyards and winemaking tradition at Yarra Yering, click here for a report of my 2012 visit with Crowe’s predecessor, Paul Bridgeman.

Follow these links for earlier reports on my visits with Yarra Valley Women of Wine:

Sourced exclusively from a 25-year-old dry-grown block south of Underhill Vineyard and slightly higher in elevation. Following three hours of skin contact and a bit of foot-treading for the Semillon, this blend of 83% Semillon 17% Sauvignon Blanc was slowly basket-pressed then fermented (primary and malo) and aged in (old) French oak barriques for 11 months.  It is so very not Bordeaux. Rather, as you might expect given process, it’s a very textural wine, with lemon shred, nutty, slippery, satiny apple pips and an aldehydic touch of red apple skin.  It’s a touch too aldehydic for me, but I like this wine’s lemon shred, saline undertow of acidity and yoghurty tang.  12.5%

Fruit for this wine was sourced from two individual dry-grown blocks, one planted in 1969 (amongst the oldest Chardonnay in the Yarra Valley), the other in 1980 from ’69 cuttings. The fruit was foot-stomped before being basket-pressed.  It was naturally fermented and aged in 500l and 228l French oak barrels (30% new) and underwent 80% malo.  It shows powerful white peach with an old-fashioned nutty, cashew sweetness.  Flavoursome, muscular and long with a firm if well-disguised/integrated undertow of acidity – the framework for ageing.  13% £46.95 at The Vinorium

Sourced from three blocks  – the 1969 original vineyard, 1973 Underhill Vineyard and 1990 New Territories.  These, some of the oldest Viognier vines in the country, produce tiny yields.  Just two barrels were made in 2015.  The fruit was crushed and underwent a little skin contact before being slow basket pressed straight to old oak barrels (any juice not pressed from the skins is then frozen to be used in the Dry Red Wine No2 ferment weeks later). It was fermented (primary and malo) and aged in barrel for 10 months.  Lacy white pepper lends a delicate note to nose and waxy apricot and succulent lychee palate.  Citrussy acidity both leavens and brings drive, making for a persistent, powerful, layered finish. Very good.  14% 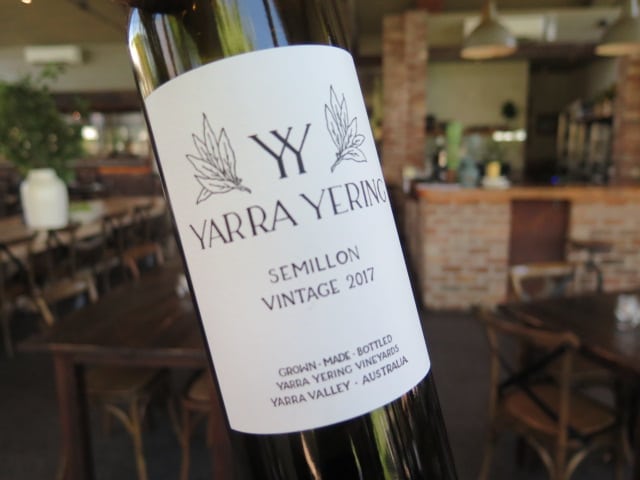 Crowe rates 2017 as a great white vintage and, with good yields, made both Dry White No 1 and around 100 cases of this straight Semillon.  She pointed out the estate has form with special single varietal bottlings in top years, including a 1990 Merlot and Malbecs in 1978, 2010 and 2016.  I enjoyed the Semillon over a chatty lunch with Crowe and Sandra de Pury at Meletos (great wood-fired pizzas), Unlike Hunter examples, it was very expressive/broachable already, intense and lingeringly lemony (lemon juice, more tactile pith and waxy peel) with sweet talc, good palate weight and dogged acidity – the chops for ageing.  Very good.

A mixed planting of 4 clones (including MV4, MV5, MV6) was undertaken in 1969, then repeated in 1981, this time close planted and again in 1984. Like Yeringberg’s Pinot Noir, this is a relatively pale, soft Pinot compared with its perkier contemporary peers, with plush scented strawberry fruit, hints of sous bois and spice, leather and a ruffle of suede tannins.  Some parcels were fermented with 20% whole bunches and some with stalks for subtle structure. Aged for 9 months in French oak, 30% new. 13.5% 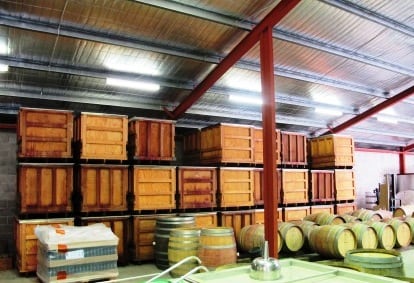 Fruit for this two-barrel blend from original 1969 plantings was destemmed without crushing and fermented in Yarra Yering’s idiosyncratic 600kg ‘tea chest’ fermenters (pictured above). Stalks were added back for lift and structure. It was aged for 9 months in French barrels, one new and one two years old.  Quite introspective compared with the regular Pinot Noir, with markedly grainier, feathery, papery tannins part of the warp and weft – very much woven into the plummy fruit. I’d hold onto this for a couple of years to allow it to unfurl more layers. 13.5%

Crowe introduced this 50:50 Shiraz/Pinot Noir blend in 2015.  This light, dry red blend was pioneered by Maurice O’Shea of Mount Pleasant and has recently seen something of a revival in the Hunter Valley (re Mount Pleasant, click here for a recent tasting note of O’Shea’s phenomenal 1944 light dry red and here for Jim Chatto’s 2014 example). Crowe explained she wanted to give people permission to drink Yarra Yering young. The Pinot Noir (whole berry fermented) came from 1969, 1981 and 1984 plantings, the Shiraz (100% whole bunch fermented) from the Waterloo block, planted in 1995.  While the Pinot Noir was hand plunged during the fermentation, the Shiraz saw only occasional light foot stomping just prior to pressing, i.e. minimal extraction.  Following 9 months in French oak barriques, the varieties were blended and bottled.  Crowe thought 2017 a great vintage for Pinot Noir and it leads the way, lending floral lift – a heady trace of violets – to nose and juicy, bouncy palate.  But this wine has a seriousness about it too, with an under-pinning of tannin which suggests it will age too.  The Shiraz, darker, builds on the palate on a persistent finish.  300 cases 13%

Portuguese grapes – the last to be picked – were sourced from 1990 New Territories planting located on a rocky terraced hillside.  Barely enough grapes are grown to fill a small fermenter. Co-fermented, this blend of 45% Touriga Naçional, 28% Tinta Cão, 9% Tinta Roriz, 7% Tinta Amarela, 7% Alvarelhão & 4% Sousão was foot-trodden then pressed and matured in old oak barrels for 10 months.  It shows juicy, exuberant red and black fruit with Touriga floral lift and sinewy, spicy tannins which, together with its fresh acidity, make for a well-focused finish and good length.  Nicely done, Crowe observed that the 2016s are beautifully fruity as young wines.  14%

Underhill Shiraz comes from a very distinctive 8 acre block of Shiraz planted in 1973 at the western extremity of Yarra Yering.  Crowe says the bunch architecture is quite different and it makes for a particularly savoury style of Shiraz.  The 2015 vintage was aged for 15 months in 500l French oak puncheons, 30% new. Although the grapes were de-stemmed and whole berry fermented, adding back a high percentage of stalks accentuates its meaty, vegetal notes.  I detect capsicum, meaty marrowfat peas and mulch notes to its slightly cooked, sweet and sour dark fruits.  With immersive ripe, silty tannins, it needs time for the brooding fruit to unfurl.  13%

This blend of 95% Shiraz, 2.5% Viognier, 2% Mataro, 0.5% Marsanne is comprised of original 1969 plantings of Shiraz and Marsanne with Shiraz, Mataro & Viognier sourced from vines planted from 1984 to 1995.   The different components were fermented with a high percentage of whole berry fruit and some stalks added back in, then aged for 15 months in French oak barriques, 40% new.  Very polished compared with Underhill, with bright, juicy blackberry fruit, hints of charcuterie and bay leaf.  Striated tannins make for a dynamic inter-action between fruit, juice and textural, gently sinewy tannins.  Lovely persistence and layer.  13.5 %

And another change of gear – a different, very Rhônish style of Shiraz.  The fruit was sourced from a small section of the original 1969 Shiraz vineyard, de-stemmed into a 600kg fermenter and, following fermentation, basket pressed into two new tight-grained French oak barrels for 20 months’ maturation. Very cool, mineral and precise, with iodine/iron filing tannins framing its violet-perfumed, tightly coiled black berry and currant fruit.  Lovely freshness, intensity and depth.  A baby.   13%

Sourced from the Agincourt block – the most easterly part and one of the most sheltered parts of the vineyard.  This blend comprises 75% Cabernet Sauvignon (a distinct Cabernet clone from the No. 1 site, planted in 1995) and 25% Malbec, planted in 1990.  The de-stemmed fruit was hand plunged twice daily with some extended time on skins to soften the Cabernet tannins. It was basket pressed and aged and underwent malolactic fermentation in two year old Bordeaux barrels for 18 months.  Wow, what a colour – inky purple and positively opaque with a bright pink rim.  So no surprises that it is so exuberantly fruity on the attack and going through, with Malbec’s violet and dark chocolate-laced bounteous black berry and cherry fruit. The Cabernet introduces concentrated cassis with leafier, tobacco and spicier curry leaf notes (a ripe vegetality).  Beautifully textured, taffeta tannins and juicy acidity carry a very long, well-focused finish.  Terrific energy and bounce, yet with a sense of great clarity and poise.  14%

So-called because the Cabernet for this Cabernet-Sauvignon-led blend hails from the first-planted 1969 vines.  The blend comprises 67% Cabernet, with 16% Merlot, 13% Malbec and 4% Petit Verdot from vines planted between 1990 and 1995.   It was fermented in Carrodus’ small stainless steel lined ‘tea chest’ fermenters and underwent some extended skin maceration before being basket pressed, then aged for 18 months in 80 % new French oak.  Not as expressive of its fruit as when I last tasted it in September 2017.  Rather, one notices its (building) tannin and acid structure – the tannins fine but sinewy, a little spicy and gently but persistently (taffeta) layered, the acidity fresh and energetic.  As it opens up in the glass, it reveals lifted tobacco and dried rose notes.  Long, elegant and perfumed with time on its side.  14%

Exclusively sourced from the original 1969 planted No1 Cabernet Sauvignon from the vineyard’s south west corner. The grapes were de-stemmed and crushed into half-tonne open fermenters, hand plunged twice daily and spent some extended time on skins to soften the tannins before being basket pressed and gravity filled to two Bordeaux barrels, one new and one two-year-old.  It was aged in oak for 18 months.  Delivers a pure hit of blueberry fruit with seductive inky, florals on nose and palate.  Chalky, fine tannins rise going through, grooming the fruit and extending the palate.  Culminates in a long, long, tapering, markedly perfumed finish.  Gorgeous.  14%