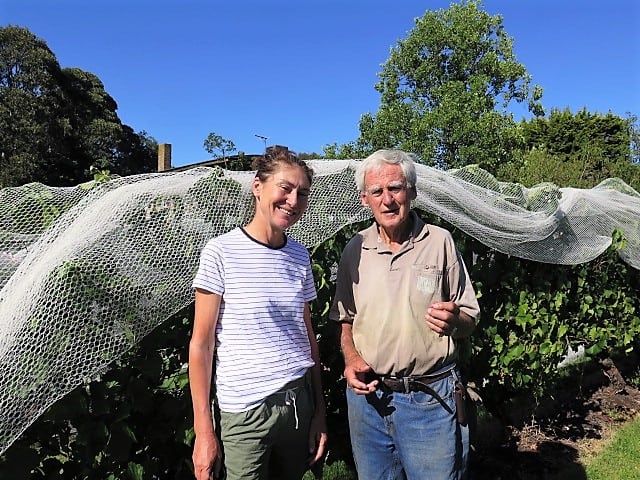 I hadn’t appreciated quite how lucky I was to visit Wantirna Estate until (a) I saw the tiny barrel cellar and (b) dropping me off at Yarra Yering, winemaker Maryann Egan was warmly greeted by top Melbourne restaurant Vue du Monde’s sommelier; his annual allocation is one mixed case!  I gather most of the wines are sold direct to private mail list customers who, on two Saturdays in October, are invited to the winery to pick up their wines and have a sneak preview of the new releases.

Wantirna Estate’s loyal customers know what’s what.  These are distinguished wines from one of the Yarra Valley’s pioneering modern era estates.  Planted in 1963 by lawyer Reg Egan and his wife Bertina, the improbable location – almost equidistant between Melbourne city centre and Mount Mary (the next closest Yarra Valley estate) – is partly down to logistics.  Reg, back then a full-time lawyer, told me the vineyard had to be near his practice in Melbourne’s Mount Waverley suburb.

Of course, it wasn’t the only rationale.  Having studied Dr A.C. Kelly’s and Francois de Castella’s vintage (as in old) viticultural tomes, the young lawyer knew he wanted to plant on eastern slopes to avoid the afternoon sun and was attracted to Wantirna’s thin top soil over clay.  Even today, the estate’s 12 acres of vines are mostly dry grown.   Though the soils are similar to to Lilydale, unlike Lilydale, Wantirna is in the Dandenong Creek, not Yarra River catchment area.  Vis a vis climate, Reg observed this means that Wantirna is a little more moderated by the ocean – perhaps 35 degrees during the daytime versus 37 degrees in the Yarra (as it was on the day of my visit); conversely, when it’s 12 degrees in the Yarra catchment area at night, it would be 15 at Wantirna. 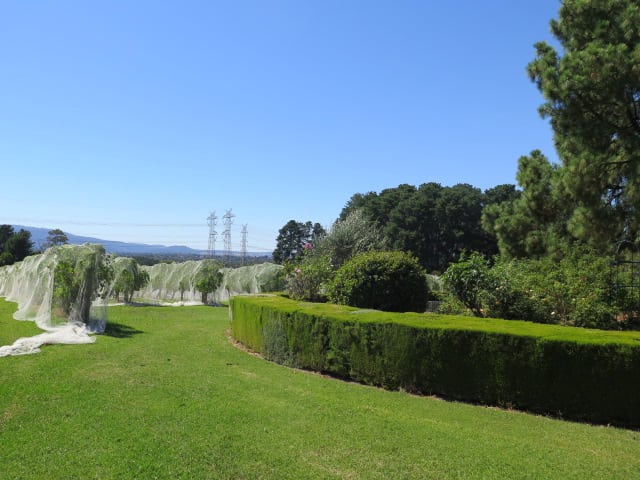 Foreseeability is something of a preoccupation among lawyers.  Still, I wonder if Reg foresaw the re-zoning of his property and thousands of acres surrounding it as green belt.  “We’re the only ones left,” said Maryann, since Parks Victoria has progressively taken over the orchards which used to be all around.  As if to fit in with the spirit of things, with its billiard table-like turf, hedged beds and ornamental roses, the vineyard feels like an extension of the garden to the house Reg built in 1971.  In turn, the house segues into the pocket-sized winery, whose reception centre doubles as a garage.  Reg was much less keen that I photograph the pylons which stride through the vineyard.  They are a dissonant note to this small-scale, lovingly handcrafted operation, in which Reg (who jacked in law for wine in 1984) evidently retains a keen, green-fingered hand, though Maryann is very much at the helm. 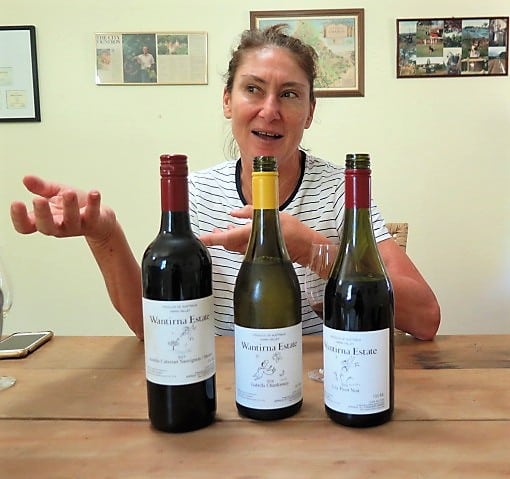 As for Maryann, just like fellow Yarra Valley Wine Women’s Sandra de Pury of Yeringberg who enjoyed a career as a chef, then consultant before succeeding her father as winemaker, the last thing Egan wanted to do was work on the family vineyard, “living in the back of beyond.” But as wine lovers know all too well, wine gets in the blood in every sense.  Can it be any coincidence that, brought up on her father’s fine cellar of French classics, Maryann ended up in Paris and, finding herself penniless, asked for her father’s help finding vintage work?

She landed in Burgundy, working with Sophie Confuron at Domaine J. Confuron and, the very next year, signed up to study viticulture and oenology by correspondence at Charles Sturt University, Wagga Wagga.  Though she held out from returning home for several years, doing a vintage at Tyrrell’s, a short (“hated it”) stint in wine retail and working as an assistant winemaker at Domaine Chandon up the road, in 1996 she joined her father at Wantirna, following the birth of her first child.

Joking that they’ve always been on trend, Maryann confirmed all Wantirna’s wines are single vineyard,   the Cabernet Sauvignon is a field blend (the vineyard is interspersed with Merlot and Cabernet Franc) and they’ve always fermented in cement tanks. “We’re small enough to do it all” she added, “with total control.”  Following a barrel tasting of the intensely-fruited 2017s, here are my notes on the current releases, each of which is named after a granddaughter; labels are by the famous cartoonist, Michael Leunig: 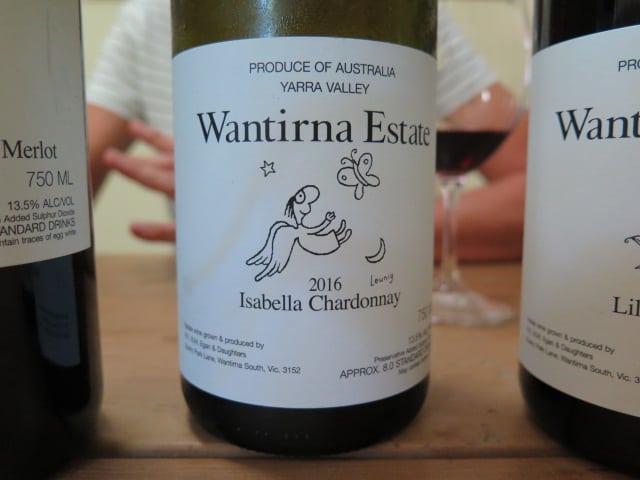 This is an Australian classic, focused around delivering old vine (+40 year old) fruit intensity and purity with poise, thanks to well- judged use of oak and top notch fruit.  Grown on an east facing, gentle slope which sees early morning and late afternoon sunshine, the Chardonnay grapes are hand harvested early in the day, de-stemmed and then pressed in an air bag press. The juice is then chilled, settled and inoculated with yeast (“wild yeast makes me wild,” said Reg, with feeling), before being transferred to a cool underground cellar once fermentation starts in new, one and two year old French oak barrels (25% new).  A steel drum component helps keeps the fruit focus/brightness as does blocking the malo for all bar one barrel.  These days, production sits at around five barrels, which puts the wild yeast comment in perspective (plus Maryann doesn’t like the attenuated character of wild yeast ferments).  With vineyard regeneration underway (with massale cuttings and mulching and compost which has increased leaf cover, resulting in more brightness and better acid retention), the Egans hope to get back up to eight barrels (twelve were made at the vineyard’s peak of production). The wine is left to age on the yeast lees with batonnage, though Maryann says she is not doing so much these days because you lose the fruit and, with vine age and low crops, it’s not necessary. (The fruit weight which low yields and old vines naturally produce also explains why Maryann is doing less and less malo).  After around 11 months, the wine is fined and sent to bottle. You certainly pick up on the old vine fruit weight and intensity in the bottle.   This is a flavoursome yet poised Chardonnay with a cool, even delivery of stone fruits, some textural chew (the low yielding old vine berries are thick skinned, said Maryann), with an underlying crystalline mineralty and subtle oak spice.  Long, firm and young.  I tasted the 2011 over dinner the previous evening, which remained youthfully firm – leaner in that year.  Very good.  13.5% 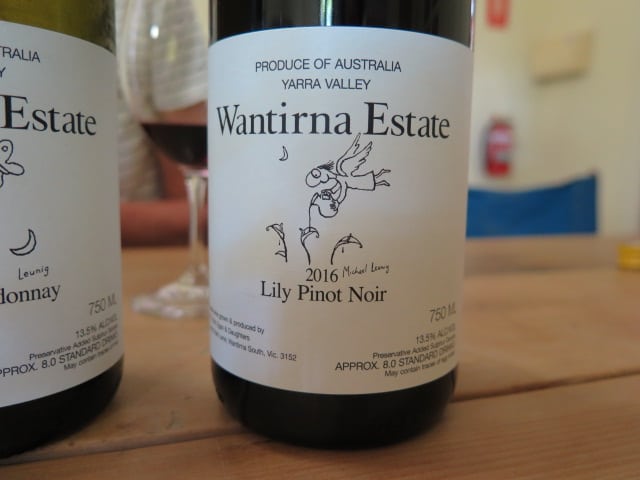 Like the barrel sample, this is a strikingly perfumed wine with lingering, heady florals (violets for sure) and the sweet scent of ripe black cherry and fruits of the forest.  Notes which follow through on a subtly creamy palate (more tangy – fruits of the forest yoghurt?), animated with pippy bilberry and juicy blackberry.  A supportive underlay of gently mouthcoating, spicy tannins builds on the long finish which has a hint of dusty curry leaf.  Lovely.  The fruit for this wine is de-stemmed and gently crushed.  Maryann does not practice cold soaks but tries to keep the fruit as cool as possible for a controlled, inoculated ferment.  During ferment the wine is hand plunged three to four times per day. She does a degree of post-fermentation maceration on skins in most years, “for very fine fruit tannins.” The wine is aged in French oak (c. 30% new) for about 11 months.  13.5% 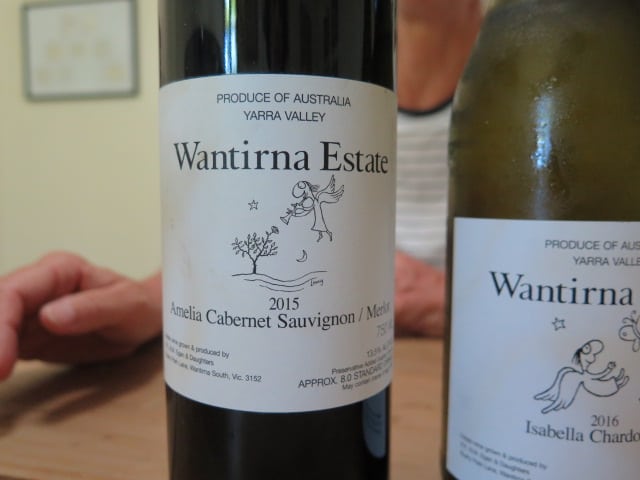 Wantirna’s reputation was forged by this wine, its Cabernet Sauvignon Merlot.   Sourced primarily from the original 1963 plantings of Cabernet Sauvignon, Merlot and Cabernet Franc (Petit Verdot was planted in 1989), it is a deep hue, with a markedly pink rim.  The chutzpah for ageing signalled already.  It has a deep perfume of blackcurrant and dusty gravel with a hint of balsamic, which notes – the core of this wine –  are fleshed out by succulent blackberry and plum on the palate.    The juiciness of the fruit lends vivacity and length to this serious wine – a wink to its gravitas.  Plentiful but fine, powdery tannins point to a long future ahead, though it is very expressive, really beguiling, already.  With that gravelly resonance dialled up a notch, the 2009 tasted the previous evening over dinner is developing rather nicely, just starting to show a little tertiary, savoury interest.  13.5%

Since 1999, Wantirna have produced a fourth wine – Hannah, a Cabernet Franc Merlot (55:45 in 2017) since Reg is a big fan of St Emilion’s Cabernet Franc-focused Cheval Blanc.  Only one barrel is made each year so, suffice to say, the current release was long accounted for!  I did, however, taste from the 2017 barrel (a new barrique from the Burgundian cooperage of Dargaud and Jaeglé).  It is very intense indeed, sharing the gravelly minerality of Amelia, but with spicier fruit and tobacco riffs.  Hannah 2017 has plentiful, mouthcoating tannins and, with lovely perfume and a strikingly pure core of fruit (a hallmark of all the wines), wears the oak well.  Most promising.

My visit at Wantirna Estate was the first of two days spent this month with Yarra Valley Wine Women.