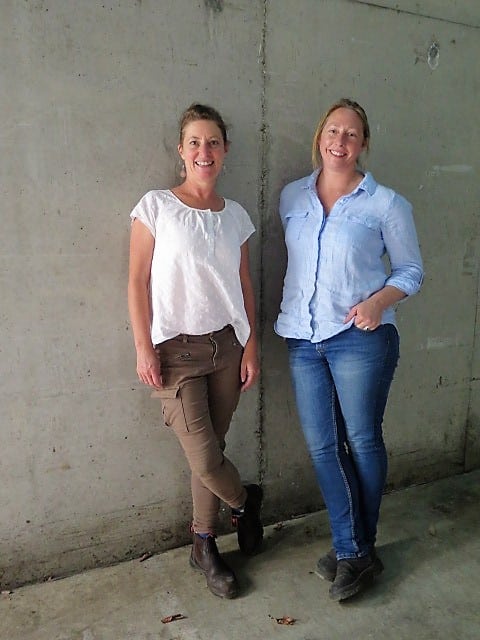 Yarra Valley Wine Women: a visit with Bird on a Wire & Goodman Wines

In honour of International Women’s Day, I give you portraits of two ladies – Yarra Valley Wine Women, Caroline Mooney and Kate Goodman.  You might say they’re laid back, but the truth is this pair are just damned efficient!  Over dinner the previous evening, another winemaker’s eyes nearly popped out of his head when Goodman said she downs tools at 6.30pm.  During vintage.  With a distinctly collaborative vibe, there’s no last man standing routine here…. 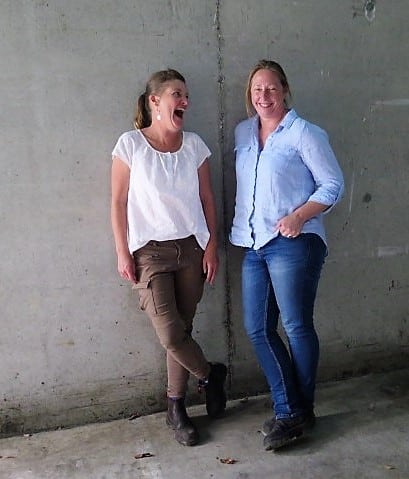 No, this was a refreshingly relaxed tasting.  ‘Tea’s in the pot,’ not ‘beer’s in the fridge’ is just as likely to be the catchcry at Goodman’s and Mooney’s shared winery.  Of course, I was there to taste wines and you’ll find my highlights below, punctuated with opinion about alternative varieties, picking dates and the Yarra’s place in the world of wine. 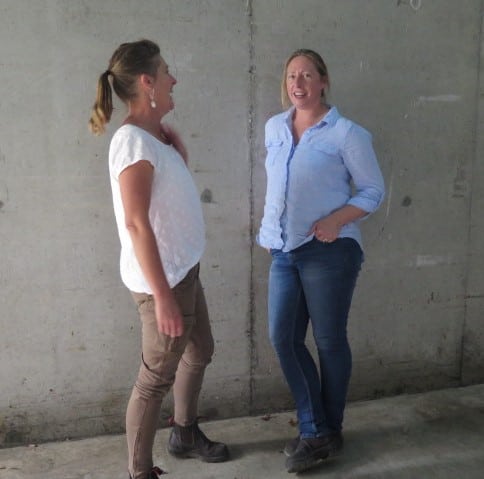 Goodman’s eponymous wines (and Nikkal range) will appear in Oddbins this summer (who, incidentally, currently sell a women winemakers’ mixed case of six).  I first met Mooney in London in 2014 and was super impressed with her accomplished Bird on a Wire range (my notes here).  Her wines are now being imported into the UK by Wood Winters, alongside fellow Yarra Valley Wine Women member Sandra de Pury’s excellent Yeringberg range.

Whilst on the topic of women in wine, I learned of a new Portuguese group of women in wine today – United Wine Women.  I’ll be hosting an ‘in conversation’ wine dinner at Bar Douro later this year with two of their number who, like Goodman and Mooney – like to collaborate.  They are Susana Esteban & Sandra Tavares da Silva who, in addition to their own labels, make Crochet together.  Details to follow.

The Nikkal label is for Goodman’s entry level wines, made for upfront drinking.  Which is not to say that they are unsophisticated.  Indeed, one senses a beady eye on the fruit sourcing, wed to style.  Nikkal  Chardonnay 2017 comes from 12-15 year old Davis clone vines planted near Yarra Glen on alluvial, clay-based soils.  They deliver a crisp and fresh, Chardonnay with well-defined white peach fruit, a limey undertow of acidity and a touch of leesy texture.  Very well done with good flavour and palate weight at 12.5%. 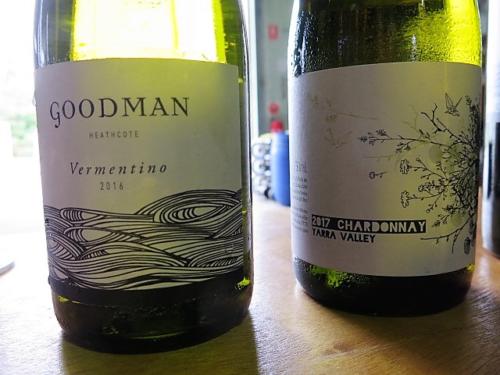 Goodman makes wine in two classic regions (she is also Chief Winemaker at Penley Estate), but continues to explore alternative varieties which she believes “have their place in the landscape.”  For Mooney, it makes sense “because we are far more informed/aware about our soils and sites and taste more widely.”  On another note, she observes that the market is very saturated, “so there is a drive to create points of difference.”  Picking up where Mooney left off, Goodman observes that the Yarra has “done a huge amount of servicing UK supermarkets with Pinot Noir and Chardonnay to price point,” so she sees the new varieties and clones which have come in the wake of the Yarra’s phylloxera outbreaks as a positive.  Goodman sources her Vermentino from the Chalmers Family vineyard in Heathcote, but makes the wine in the Yarra.  It’s a complex, textural example – a touch earthy/bosky to nose and palate – with roast lime and a saline finish.  Forty percent of the wine was barrel-fermented and Goodman presses it hard “to get chalky phenolics – a skeleton from which to hang the flavours.”   It lends shape and (going nutty) direction.  Very good, characterful example.   12.5%

I was not unhappy to see this wine again.  Far from it.  It was one of my January Wines of the Month.  Mooney confirms, “2015’s fruit was amazing.” It comes from original vine rows (c. 40 year old, clone P58) at the cool, elevated (300m) Willowlake Vineyard in Gladysdale, the Upper Yarra.   With amazing fruit and an amazing vineyard manager “it’s a fight to keep that,” she adds – a not infrequent comment about top notch Upper Yarra Chardonnay.  On this showing, it builds steadily in the mouth, revealing lemon curd, nougat, lime shred and lemon verbena notes.  Terrific depth and persistence.  Thoroughly delicious and with time on its side.

And guess who else is in the Willowlake bun fight.  Goodman’s Chardonnay is sourced from a different (Davis) clonal material and slightly younger vines.  It’s a tauter, more restrained Chardonnay – as much, perhaps, about Goodman’s approach – “I like to see acidity…juicy drive.”  This wine was gently whole-bunch pressed and the juice racked with light lees to French oak
for natural fermentation.  It has a touch of oystershell, with bosc pear (and pearl skin – a lightly textural note) and firmer grapefruit/grapefruity drive, making for a nervier finish.  Fascinating to see the difference.  The common ground is the natural acid structure – a veritable support beam/RSJ and flavour where, said Goodman, “we both love Chardonnay that has flavour and you don’t get it at 10 baume…you get lean, green acidity.”  12.5% 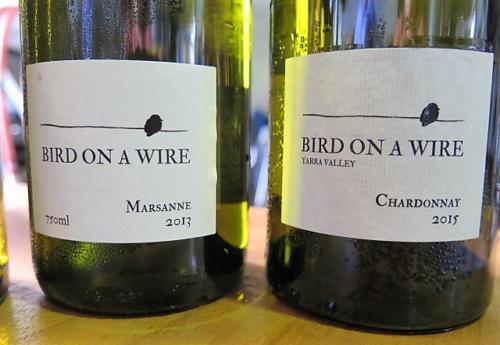 I first tasted this wine – the very same vintage – in 2014 with Mooney.  She reckons it has really settled into itself though I must say I’ve really enjoyed it on both occasions and gather it went down very well at last year’s Wine Australia Women of Wine tasting.   You can see my earlier note here, which reports on Mooney’s approach to this Rhone variety and her fruit sourcing.  It is holding remarkably well for a wine of this girth.  Mooney confided, “the trick is to get the phenolics in balance, which pull it back in.”  Which entails a bit of skin contact via pressing out the grapes and spinning the press lots.  The nose remains enticingly exotic with honey and stem ginger which notes follow through on a nutty, creamy (incipient brown butter) palate, with lifted lemon pith and a suggestion of lemon curd. 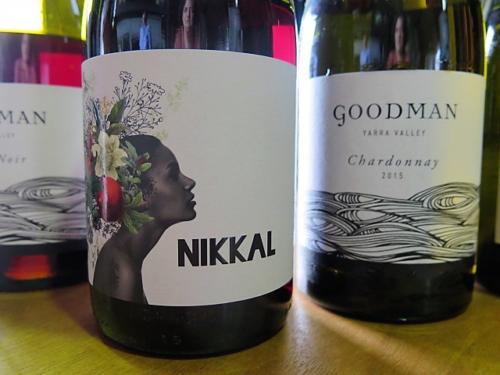 This deliciously bouncy, aromatic Pinot Noir is sourced from Lower Yarra Valley vineyards in Christmas Hill Creek and Yarra Glen, which makes for plenty of flavour too.    Peonies to the nose lead the way, followed by enticing Aperol notes of orange peel, rhubarb and dried herbs/spice to its smooth melange of red summery berry and cherry fruit.  In a word, yum!  Goodman ferments small whole berry parcels with a bit of whole bunch in open vats; around 70% of the wine is matured in barrel for a short period.  13%

Although this Pinot underwent a 100% whole bunch ferment, Mooney is categorical – “I don’t want a dominant stalky note to override the fruit.”  Consequently, this wine spends only around 80 hours on skins with a warm ferment to break down and extract tannins.  Pressing off at around six baume into old barrels, this short extraction period means that the stalks don’t break down and impart greeness or bitterness to the wine.  The proof is in the pudding and, sure enough, whilst this is a savoury (“I always love savoury,” says Mooney), pithy Pinot, it is not green (rather it is spicy, with liquorice and anise).  What’s more, though flavoursome, with its pomegranate and firm red cherry fruit, it has a levity about it.  Great line too.  Still youthfully tight, it has a tapering finish.  Promising and distinctive. 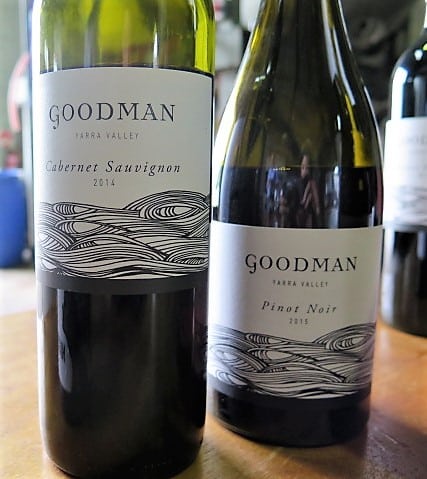 Goodman’s Pinot Noir comes from our old friend, Willowlake Vineyard, which has among the Yarra’s oldest (MV6) Pinot vines.  This wine saw around 30% whole bunch, which was fermented separately so the winemaker could exert control over the contribution of stems to the final blend.  It was pressed after 14 days on skins and matured in French oak barrels (20% new).  It is a more delicate Pinot than Mooney’s, already very expressive with lifted floral and spice notes, a hint of mushroom/sous bois and Campari dried herbs to its silky red cherry and berry fruit.  As you would expect from the vineyard, it has a fine rasp of tannins and fresh, persistent acidity, which anchor the flavours nicely going through. 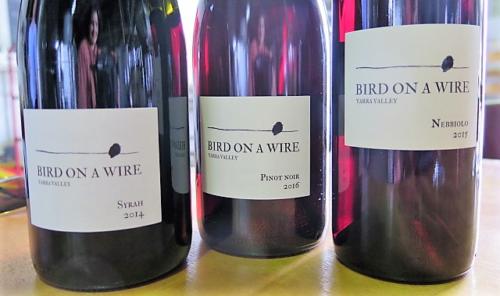 Perhaps unsurprisingly given both grapes’ Rhône origins, the Syrah comes from the same Yarra Glen vineyard as the Marsanne.  A vineyard which, says Mooney, is very good at producing seasoned stalks (she typically uses 35-50% whole bunch).  In 2014 – a really long ripening season – the stalks ripened nicely and this Syrah has delicious white pepper lift on the nose, which resonates even more deliciously on the palate.  Striated tannins lend order and interest to its succulent, fleshy plum fruit, while the oak lends a hint of charcuterie.  The finish is long and sinewy.  Lovely.

The fruit is sourced from De Bortoli’s Dixon’s Creek vineyard (3 clones). It’s Nebbiolo alright, pale, with sandpapery tannins, a hint of mushroom, rose petals and Camapari-like orange peel and dried herb riffs on a tight knit red currant/berry-fruited palate.  Dry, firm and focused, with a purity to its fruit core.  It’s young and only just starts unfurling in the glass before I have to leave…Mooney thought about putting it under cork for this reason.  I’ll be interested to come back to it but it looks promising.  The fruit was hand picked, de-stemmed and crushed; during the ferment (inoculated) it was handled to minimise sweet fruit influences and maximise the savoury extraction from the skins with a regime of plunging, rack and return and pumping over (which apparently allowed Mooney to pull out seeds).