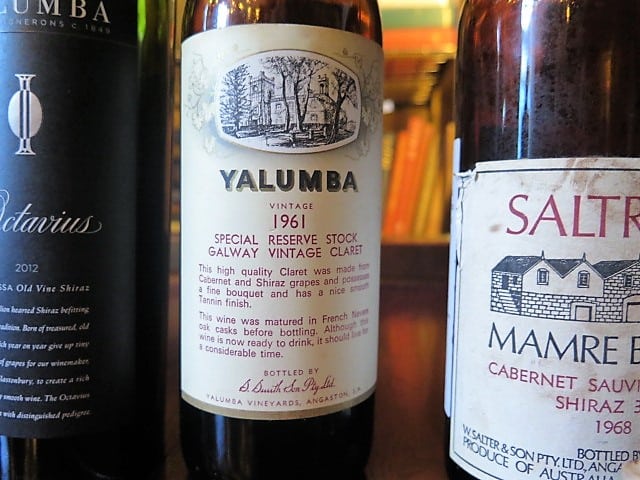 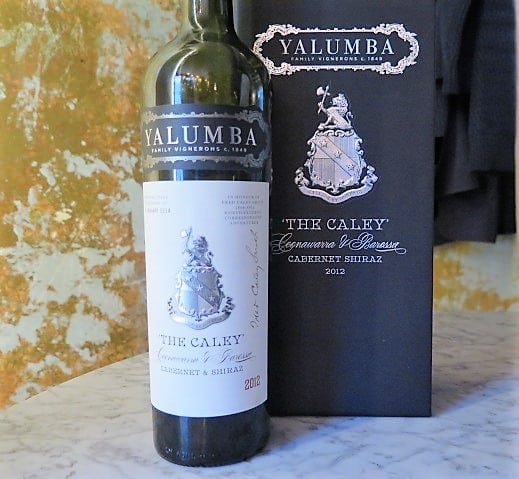 Hyperbole?  Not at all.  I am all too aware that it is a great privilege to taste rare and iconic Barossa museum releases alongside world class contemporaries from elsewhere, such as Mount Pleasant Mount Henry Light Dry Red 1944 and Chateau Mouton Rothschild 1959.  My opportunity to taste such wonderful regional ambassadors came about at the cleverly contextual, confident London launch of Yalumba’s The Caley Cabernet Sauvignon Shiraz 2012, a June Wine of the Month.

Shortly after tasting these dreamy wines, Yalumba’s Louisa Rose wrote to me about a long-held Barons of Barossa dream which looks set to come true – a project to build an independent, globally recognised and respected regional wine museum – The Barossa Cellar.  It would create a most befitting home for the renowned South Australian region’s past and future classics and (see below), donations to the cause are most welcome.

A mock up of the proposed Barossa Cellar

Here are my notes on the Cabernet and Shiraz wines which we tasted, the second and third flights over dinner.  The tasting was hosted by Robert Hill-Smith in London on 25th May.

Pronounced by then Prime Minister Sir Robert Menzies to be the best red wine he’d ever tasted, this 1961 medium-bodied red catapulted Yalumba’s classic Shiraz/Cabernet blend into the limelight.  From 1962, it was re-badged the Signature Series.  Comprised of 61% Barossa Shiraz and 39% McLaren Vale (Seaview) Cabernet Sauvignon, Hill-Smith explained that this wine would have come about because of grape swaps between the two South Australian regions.  Though somewhat maderised, with a Tawny-like sweetness and nuttiness, it is by no means dried out and retains some grace to the palate.  An umami complexity too, with bouillon and iodine-flavoured powdery tannins to its whispering but persistent panforte fruit. 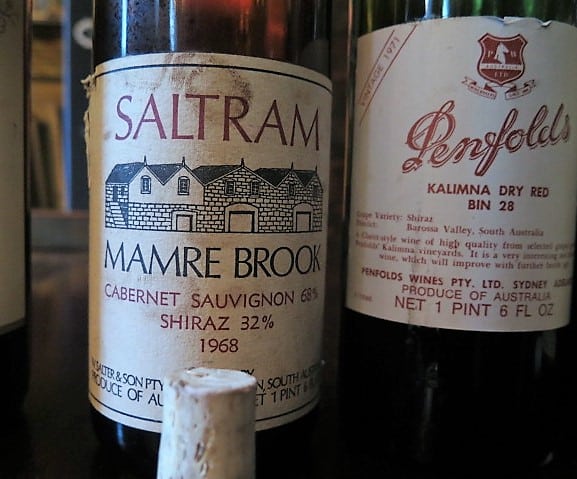 Made by the late Peter Lehmann (and from his cellar), the Cabernet (68% of the blend) still runs the show, now a pungent curtain call with Camp Coffee and herbal notes.  Drying out, with a lean, leathery finish. (Incidentally, a couple of years ago I enjoyed a stunning 1971 Saltram Bin 88 Shiraz from Peter Lehmann’s cellar – my notes here.) 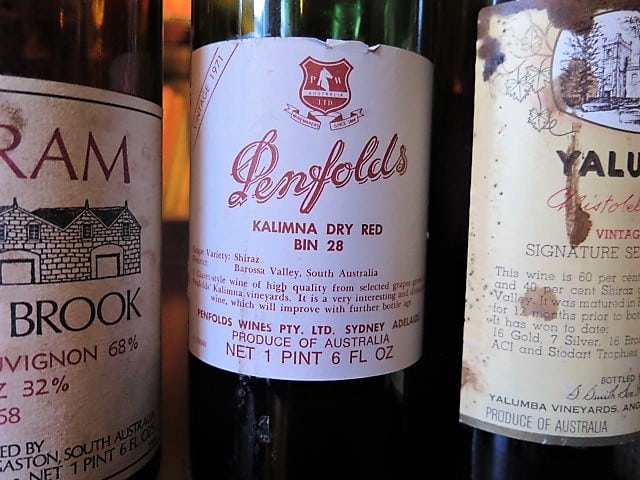 During the late 70s Kalimna – a Shiraz – became a multi-district blend but early vintages (and presumably this one) were from one vineyard – the eponymous Kalimna vineyard.  From a great South Australian vintage, this bottle was in fine fettle.  Rich and mellow in flavour spectrum, with panforte dried fruits, cherry chocolate truffle and smooth, ripe, chocolately tannins.  Building spicily in the glass, it revealed roast coffee, oyster shell/iodine and mushroom nuances, finishing long, perfumed and spicy. Terrific. 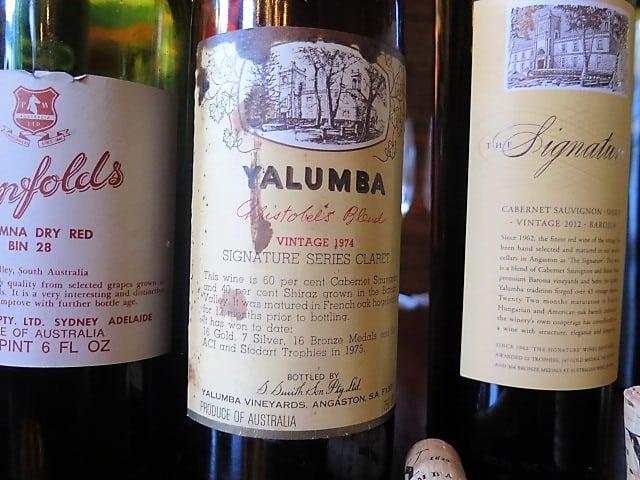 Named after Christobel Hill-Smith who intrigues me because Hill-Smith described this wine as “infamous.”  Not only because it is from the first year in which the Barossa is known to have experienced downy mildew – “we had no idea how to address it” – said Hill-Smith, but also because it stormed the show circuit, winning over 20 medals.  And one can see why.  This blend of 60% Cabernet Sauvignon, 40% Barossa Valley Shiraz remains a lively, elegant wine, with minty, slightly vegetal berber whisky lift, dried herbs, earth and more than a vestige of blackcurrant fruit to its core.  Almost enough to drown out a whisper of white noise dustiness.  Still, the Cabernet remains assertive to the last, making for a firm, focused finish.  Very good. 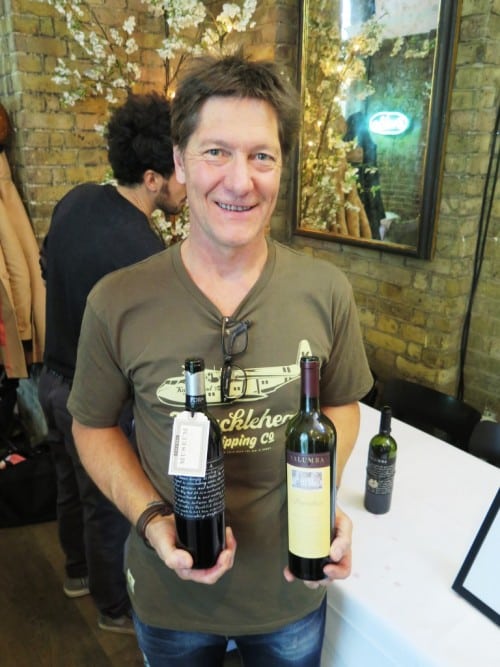 In this highly regarded “surplus of beauties” vintage, Hill-Smith said any winemaker anywhere in Australia who made an ordinary wine has a problem.  This is a beautiful wine – an elegant release, with exquisite bone structure and sweet but juicily persistent blackcurrant and fragrant violets.  Ultra-fine, seamless tannins and blackcurrant-sluiced acidity carry a long finish.  Moderation in everything, save excellence.  Very classic, it is a blend of 52% Cabernet Sauvignon 48%, Barossa Shiraz.  Click here for my notes on a vertical of The Signature 2004, 1992, 1976 and 1966. 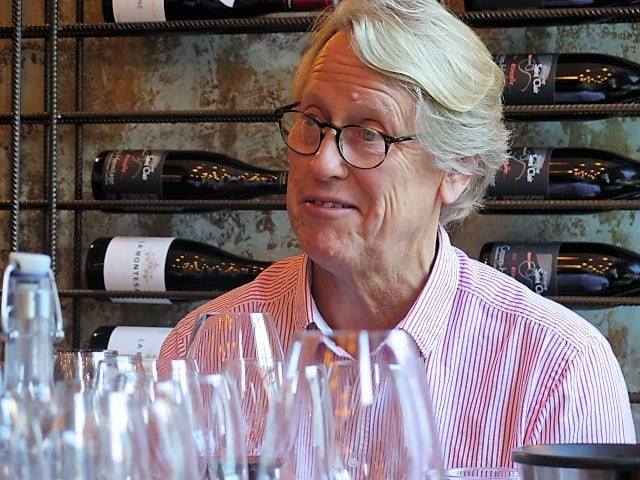 The Caley marks Yalumba’s return to blending Coonawarra Cabernet Sauvignon (52%) and Barossa Shiraz (21%).  With a bridge of 27% Barossa Cabernet, it is the slinkiest of wines. A gorgeous nose and palate, deep with inky, intense cassis, yet with the delicacy and fluidity of expression to carry the detail – fragrant, sweet dried herbs (lavender and rosemary), exotic black tea and a hint of lamb fat (or is that auto-suggestion).  Lithe, very slinky, with delicious, nuance-teasing line. Fine oak and fine but plentiful, purring tannins are well blotted by its perfumed, bright, seemingly indelible blackcurrant and kiss of cassis.   Transporting.  The Caley was aged for an average of 22 months in French barriques (35-40% new), then blended, bottled and cellared for 36 months prior to release.  14%  You can find out a little more about the background to this outstanding wine here. 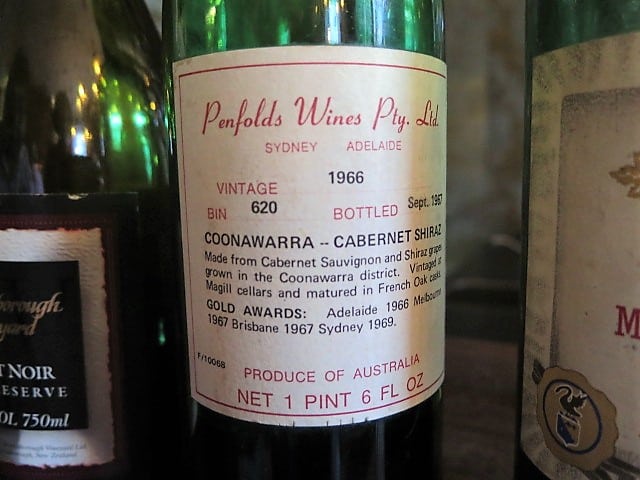 For Hill-Smith, this is “the base wine inspiration for Cabernet Shiraz.” Only produced in 1966 and 2008, Bin 620 is an iconic Australian wine with a price tag to match.  This impressive wine came across as the rather august parent of the Penfolds Bin 28 Kalimna Shiraz we had tasted earlier.  Less buoyant, more serious; still brooding even.  Initially distinctly firm and dry (but in no way dried out), with a swathe of palate building, chocolately, powdery tannins well supported by darker panforte notes, with delicate mushroom nuances.  Slowly but surely unfurling.  Substantial. Almost a shame to drink it now. 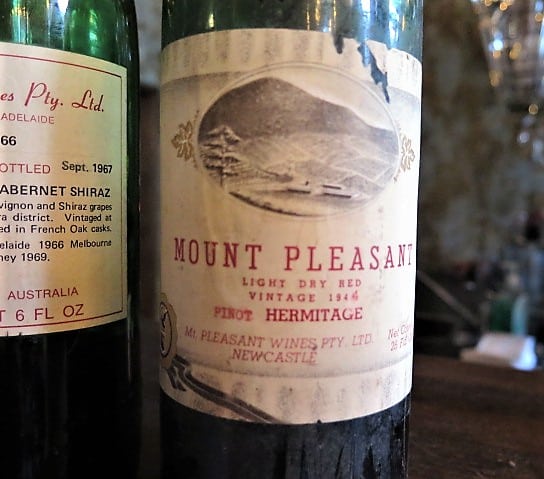 Well might you ask about Pinot Hermitage.  Maurice O’Shea, Mount Pleasant’s legendary blender, was a fan of Shiraz with a dash of Pinot Noir.  With good reason.  This most finely crafted of wines floated headily upon a cloud of fine iodine (powder) tannins, its delicate but very present impression of red fruits – neither soft, nor hard – accented with oyster-shell and feint but lingering cedar and linseed nuances.  Great energy, perfume and persistence to the long, fine, pure finish.  Haunting.  A marvel.

Pronounced umami, savoury nose, though the dark fruited, chocolatey palate is richer and rounder – much more present and alive – than it suggested. Iron filing tannins provide the girder.  Impressive structure, line and length, with that smack of iodine I so often find in older Australian wines on a long finish.

Pretty gutsy to show The Caley alongside this much venerated First Growth.  I was sitting next to Steven Spurrier who told me it had attained 100 points on two blind tastings at which he had previously tasted this formidable claret.  Terrific intensity of perfumed, cedar-edged blackcurrant fruit still, with fine tannins, lovely freshness and great polish.  Still so animated.  Wow.

A lively nose and palate with perfumed sweet blueberry fruit and polished blackcurrant.  Fresh acidity and ultra-fine tannins propel a long, engaging finish with a salty note and balsamic lift.  I see from my notebook that this wine got two big, strident ticks from me – an impressive showing given it followed on from the Mouton 59. 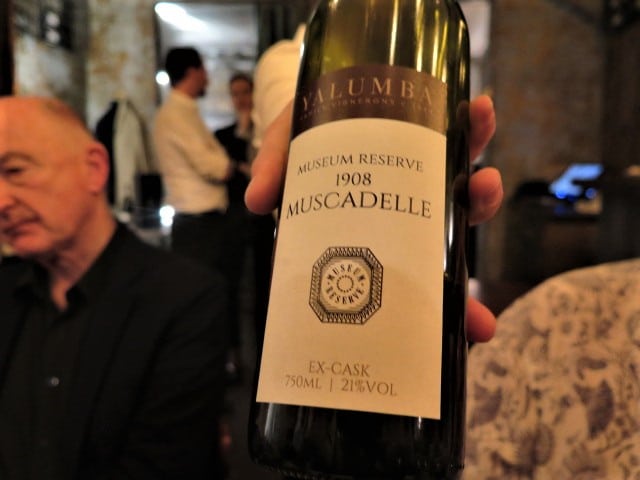 Introducing this fortified wine as “a nod to the past,” Hill-Smith said it comes from the year of his dad’s birthday.  It would have been fortified with Barossa-distilled spirit and, since nothing is left to refresh it with, there is now just a quarter of a cask left.  I am pretty sure Jane Ferrari gave my group a snifter when I first visited Yalumba in 2004, so I am super lucky to have had two bites at this cherry!  Spurrier summed up this blisteringly intense wine when he said “I’m surprised it doesn’t explode the cask!”  Viscous and uber-sweet, this is a demi-sip wine!  A thimbleful of history. 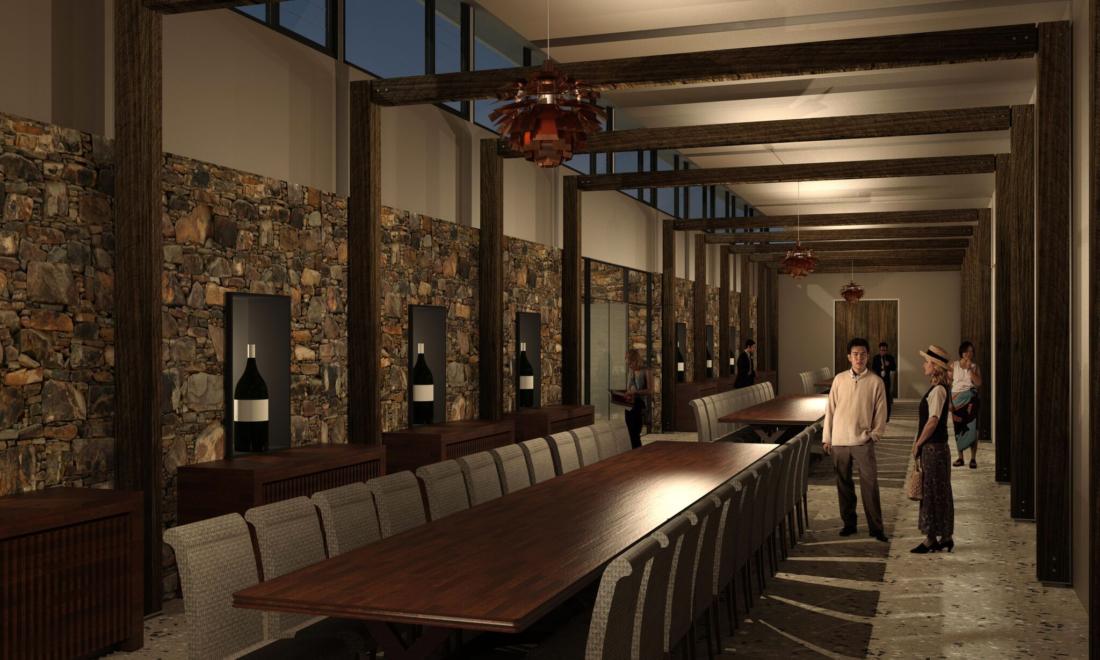 Mock up of inside The Barossa Cellar – The Grand Hall

I can do no better than quote Louisa Rose about this passionately conceived project:

“You may be aware of an exciting community project that is underway in the Barossa – to build an independent, globally recognised and respected regional wine museum. The Barossa Cellar has been a dream of Barons of Barossa for many years and finally it looks like becoming a reality, with over $2.0M cash, pledges and in-kind donations ‘in the bank’!

The Barons already have a significant collection of fine wines from the Barossa and Eden Valleys which has been, and continues to be, generously donated by local wineries. Not only will The Barossa Cellar be a stunning building in which to cellar and showcase this magnificent regional wine collection, but the Barossa Grape & Wine Association (BGWA) has signed a long-term agreement to be the sole tenant of the building. This will ensure The Barossa Cellar is a living, breathing building with a real sense of activity and purpose at the heart of the Barossa grape and wine community. At The Barossa Cellar the Barossa wine community will be able to showcase and educate discerning wine lovers from all over the world about the intricacies of Barossa wine.”

Over the coming months, Rose told me they need to raise another $2m and, with support from Barossa wineries and grape growers, the local community as well as local businesses who have pledged in-kind contributions to the construction and fit-out of The Barossa Cellar, Barossa Barons are confident that they will be able to begin construction in spring this year. Any support is greatly appreciated “as we believe this concept of a regional wine museum is unique in Australia and will be of interest to discerning wine consumers from all around the world.”