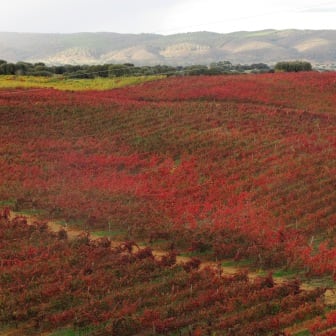 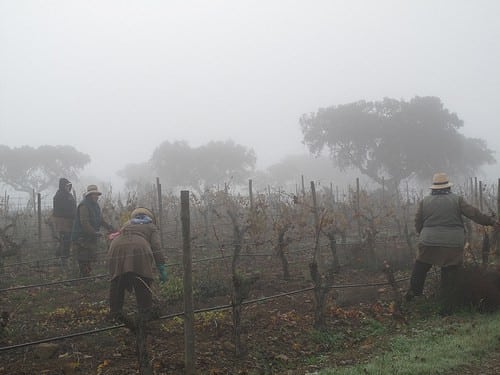 Winter pruning at Herdade do Esporão

It’s the pruning season now in Alentejo.  But what of the last crop? My sixth Portugal 2015 vintage report rounds up leading Alentejo producers’ views on 2015. Many vineyards here are irrigated, which is a boon in such hot, dry years.  It helps keep photosynthesis and quality on track.  Still, it’s those varieties best adapted to the heat which appear to have performed best in 2015, with strong consensus about the (high) quality of both Syrah and Alicante Bouschet. 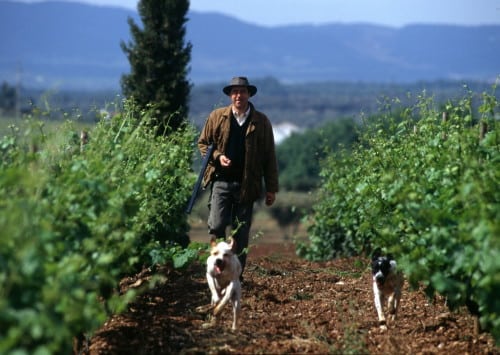 The year 2015 was very dry: the winter provided us with less water than usual, just enough to have some reserves for irrigation later in the season. From budburst to flowering the temperatures where higher than normal as well, part of the decrease in yield this year can be explained by the warm temperatures during flowering. From veraison to the harvest, the temperatures got closer to the norm, but there was no rain.

Being such a warm and dry year, the plants were of course under a strong water deficit, we were able to irrigate and that helped a lot, but even with irrigation, the berries were smaller due to water loss, and with that, we have more skins and seeds comparing to pulp. This aspect was a key factor in our wine making techniques this year.

The weather during the harvest period and also from veraison to harvest period was dry, but with cold nights and fresh mornings, which helped a lot to conserve the acidity levels. The grapes arrived at the winery without any health related problems, there were no conditions to develop diseases in the clusters. Also, due to dehydration, the grapes provided musts rich in concentration. In the white varieties, the ones that suffer the most with lack of water, we harvested them very early in the season (10th of August) and also very early in the day, so the grapes could arrive with low temperatures at the winery. Harvesting this way, we were able to retain the natural acidity, which is an important factor to have good white wines in Alentejo.

We can say we are pleased with the year, despite bad weather from April to July with extremely high temperatures and the lack of water. We have concluded that the grapes are good, but we can’t compare this vintage to the likes of 2011 which many producers are doing.  The yield in 2015 was below normal, mainly because of dehydration and also contributed by some flowering problems early on. We estimate to have less 15% than normal.

The white wines we have made this year have a very good mouthfeel and are rich in aromas. The varieties are used to warm climates, and so have provided us with great wines. The varieties that are more sensitive to warm temperatures, like Verdelho for example didn’t give us the aromatics that we would normally expect. Concerning the reds, we can’t complain: concentration was obtained naturally due to the water loss in the vineyards, some wines had less time fermenting with the skins and seeds than other years to avoid extracting green flavours. This was an excellent year for Cabernet, Syrah, Touriga Nacional and Aragonês, while our Trincadeira suffered a little bit in this year’s weather conditions.

A blaze of Alicante Bouschet at Herdade do Peso

According to Luís Cabral de Almeida, winemaker responsible for Sogrape’s wines in the Alentejo, this region’s growth cycle followed the trend of the rest of Portugal. However, during the summer, which was marked by hot, dry weather, the cool nights so typical of the Vidigueira area in which Herdade do Peso is located, arrived later than usual.

As usual, grape maturity was monitored in order to schedule the harvest. It was noted that as early as August, the vines were fighting against the heat. Faced with this scenario, it was necessary to gauge the optimum stage of ripeness for the red varieties.

This was achieved as a result of a drop in nocturnal temperatures at the end of August, which balanced the development of the phenolic compounds. Herdade do Peso, August 2015

As for the work in the winery, this year’s innovation was to start the fermentation process in clay amphorae, an ancient method introduced by the Romans hundreds of years ago now being revived at Herdade do Peso. As this is a trial year, Luís chose to use a blend of red grape varieties and will now monitor the progress and evolution of these wines.

The harvest lasted until the second half of October with the last Touriga Nacional grapes harvested on the 20th. Luís Cabral de Almeida is very happy with the results and the whole harvest in general. As far as the white wines are concern, the spotlight is on the performance of the Arinto variety and it is possible that a little more of this variety will be needed to complement the structure of the Antão Vaz variety in the blended wines.

As for the red wines and the continued good performance of the Alicante Bouschet red variety, the highlight of 2015 is the Syrah variety. This grape variety presented the best results in terms of colour, aromatic richness and structure, leading to very high expectations regarding its future development. 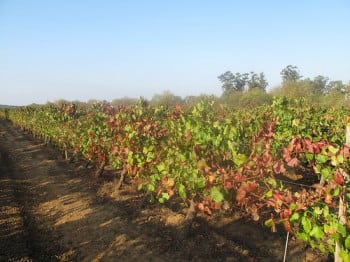 After a dry winter (300mm) and a very hot and dry spring and summer, the Alentejo harvest started early – very early. Mouchão was no exception, with 2015 being the earliest harvest on record. Never before had reds been harvested in August at Mouchão.

Total rainfall for the season was a mere 385mm (Évora), so irrigation was relied upon for the months with greatest heat stress in May, June and July (avg max temps 30ºc, 33ºc, 36ºc). Plant metabolism was strongly influenced by these stress factors. Whilst berries did not dehydrate or suffer from sun-scorch for the most part (as sometimes occurs in August in hot years), sugar levels soared unexpectedly at the end of the second week in August (Baumés over 14). Whilst pips were relatively mature, the pulp remained attached to these in most red varieties until the second week in September. Skins were also a little raw early on, and slightly short in pigmentation. Aromas were shy during this first phase of the vintage.

The second phase in cooler conditions was ‘night and day’. The fruit was aromatic and fresh. Alcohol levels were surprisingly low for what we might have been expected. Some very fine wines were made at Mouchão. Natural acidity was excellent throughout the harvest. There was little disease of note in the region though leaf hoppers did create defoliation issues for some growers nearer the harvest. The thin-skinned, tight-bunched Trincadeira – the Alentejo workhorse – did not like the half-day of rain on the 5th September and needed harvesting quickly before sour-rot had time to set in.

Harvest volumes are expected to be very similar to 2014 across the Alentejo – perhaps fractionally lower. In Mouchão, 230 tonnes were harvested (89% of which was red), almost identical to last year. So far we can say 2015 was above average in quality; some of the late batches in particular could prove exceptional.

The 2015 growing season was marked by a very dry winter followed by above average temperatures during Spring and Summer. These hot, dry conditions resulted in an earlier than normal start to the harvest, at Esporao we began on the 3rd August, about a week earlier than usual. Although temperatures were generally on the high side, we did not have extreme heat, with only a few days above 40ºC.

The harvest weather conditions were good and we had only one afternoon of rain towards the end of the vintage, so grape quality was excellent throughout.

In vineyards with irrigation, the grape quality was mostly very high although growers without this backup suffered.  The cooler, high altitude region of Portalegre, where are we sourcing some 400 tons of mostly red grapes, has produced outstanding quality.

Quantity was generally around 10% below average, which was expected given the dry conditions.  At this stage, the whites are looking good with plenty of fruit flavour. The reds have great colour but are still going through malolactic fermentation so final assessment is difficult. Syrah looks to be a stand out variety, Alicante Bouschet also. 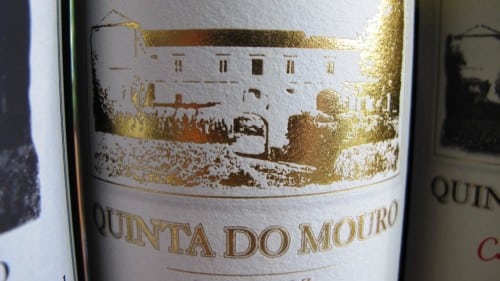 2015 was one extremely dry year.  Summer was in average warm but not with extreme temperatures, surprisingly vineyards were with limited hydric stress especially the non-irrigated ones and older. Grapes were very healthy and plants had lot of green leaves. Everything appear to be fantastic.

September was also a dry month and we had time to harvest in perfect conditions of maturity, flavors, and healthy. Wines are just fantastic in all dimensions…Quantity was also bigger this year. 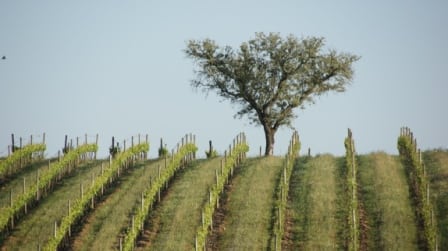 Longest vintage of the last 10 years: from the 5th August to the 9th October:

2015 was a very dry year in Alentejo. First rains arrived during the months of October, November and December of 2014 with some intensity. From January 2015 until the beginning of our harvest we only had 150 mm of rain (normally– 400 mm).

Concerning mildew and oidium it was an easy year to work with. We had some mildew pressure during the first vegetative months. The summer time was very dry but not so warm which had allowed to a long ripening. Due the high stress hydric we had in all the vineyards the same quantity of bunches but with a lower weight.

Alicante Bouschet from Herdade São Miguel evolution since December 2014 to October 2015. Harvest started by the 5th of August with some Whites such as Sauvignon Blanc and Verdelho and on the last week of August with some Reds for Rose such as Aragonez and Touriga Nacional.

On the 25th of September all the white grapes were pressed and fermenting. ‘’ 2015 is a very nice vintage for Whites and Roses in Alentejo, the wines are very rich in aroma with very fresh and delicate acidity‘’ (Nuno Franco).

The red grapes harvest had finish on the 9th October, last grape getting in was Alicante

Bouschet from Herdade da Pimenta. ’For the reds we can expect from 2015 wines with really deep color, great aromatic intensity and very balanced tannins and acidity’’. (Alexandre Relvas)

At this moment (14th October) all the alcoholic fermentations are finished and malolactics are on their explendor. For this vintage, we expect to have entry and middle level wines with superb quality, with a lot of expression and character, very aromatic and balanced.

On the top wines we have a lot of expression, and very qualitative tannins. Ageing will be crucial to know if we have an historic vintage. We can say that 2015 is a very good vintage in Alentejo. 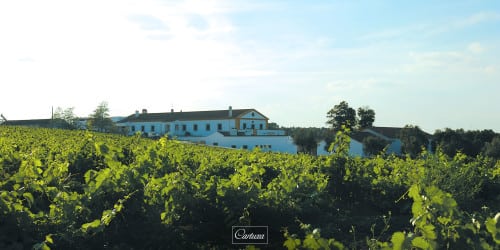 Mother Nature produced light rain throughout 2015, resulting in weaker vines and smaller berries than usual. Mild temperatures were from time to time offset by short- lived hot weather, with maturation developing slowly and gradually, as expected.

Picking of white Arinto and red Touriga Nacional varieties – the backbone for the sparkling wines – started on July 27th.

Harvest of other white grapes, like Sauvignon Blanc, Semillon and Verdelho, started on August 10th with the picking of all other red and white grapes starting a week later.

The conditions throughout the year had an impact on vinification, resulting in smaller than average yields.

As for final quality in the bottle, it’s too early to know, but here’s a sneak peek: white wines are very promising, showing freshness and aromatic intensity, with reds showing good concentration and elegance.

We believe that 2015 will be a good vintage, with wines, reds and whites, full of potential.