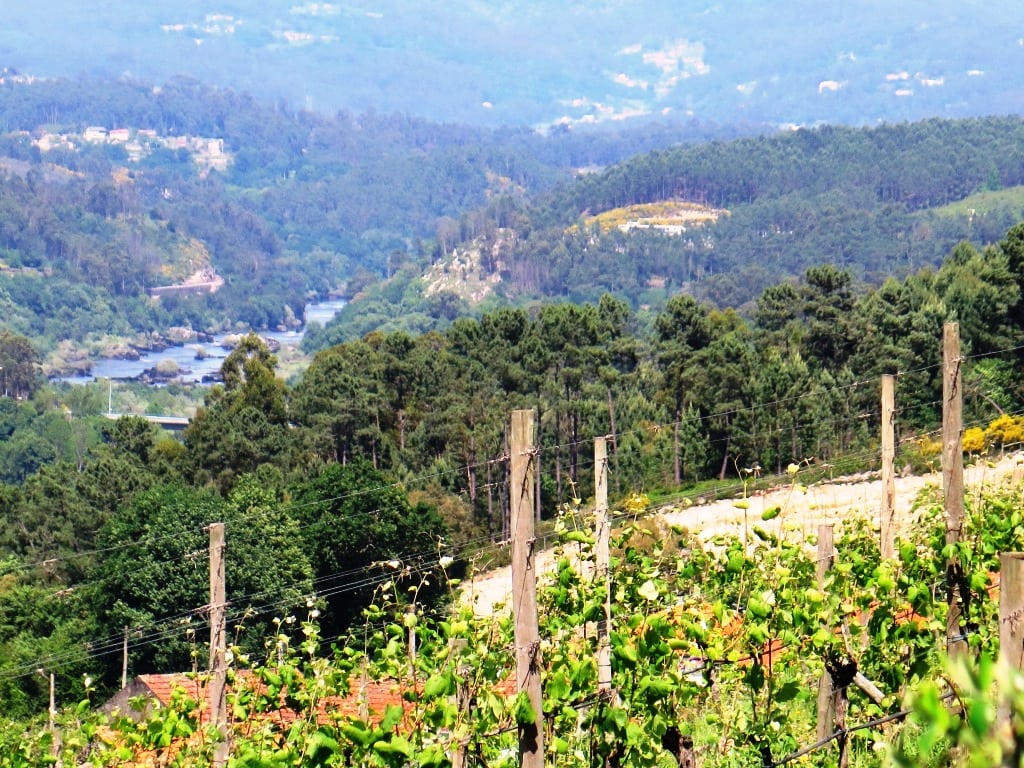 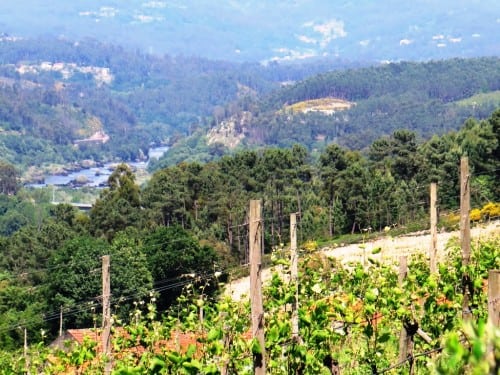 Sunny at Soalheiro – of course! Pictured: vineyards high above the Minho river

My end of year is always focused on Portugal as I update entries for Hugh Johnson Pocket Wine, including the vintage report.  Over this month I’ll share with you the word on the ground about this very dry year.  For some, too dry to be a stars’ aligned perfect 10, or rather 11 – 2011!  But, by most accounts, 2015 was a very good year for both quality and quantity.

Follow this link for my Guide to Vinho Verde/the Minho.

The problems for us were atypical having more to do with drought and heat than with rain and humidity.  Some of the younger vines lost production, or were not able to develop good maturation because of the excess of dryness.

Near harvesting, a few showers had a beneficial effect, and we were able to pick very healthy, maybe the most perfect grapes of recent years. Wines are looking very good.

Here is a video of the harvest, highlighting Croft’s natural, artisanal approach. 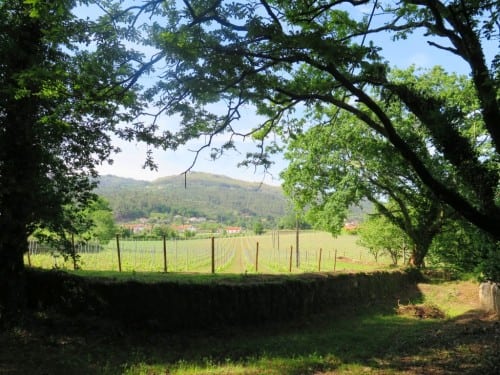 Set fair: the vineyard at Ameal

After a very dry year ( perhaps the most dry one ever… ), before harvest, the grapes were a little bit dry but a 2 day shower in the beginning of the harvest balanced everything perfectly.

The wines still in vats/casks for ageing. Very positive and happy!

Of my 27 harvests (since 1988) I can say that 2015 is in the Top 3. I hope next March to say for sure, that it is the best ever. The reds from the Douro, Dao, Bairrada and Alentejo are also very good but we have to wait until May/June to say it was excellent.

The year was very dry and the vineyards were saved by the late rains of July. The month of August had hot days and cold nights which allowed very slow and balanced maturation. Some rain in this month also helped the quality.

Almost 100% of the Alvarinho and Avesso was harvested before 15/9. The Loureiro and most of the Vinho Verde grapes were harvested after 15/9. In my opinion the rain improved the quality of Loureiro, increasing the sugar and decreasing the acidity. The wines became more aromatic.

The whites have a very intense varietal expression with strong minerality and very good acidity, are full bodied and long. Excellent year for with great longevity for sure.

The reds from Northern Portugal are very pure and elegant, fresh with smooth and fine tannins.

A perfect and consistent vintage. 2015 harvest has well balanced and very equilibrated wines with high quality distinction in the Alvarinho.

The summer months and specifically August had moderate temperatures and cool nights that favored a slow maturation and the concentration of the varietal aromas on the grapes.

The beginning of September was dry which contributed to a perfect balance that will reveal complex and more mature fruits with fresh lemon notes in the flavor.

This year we began the harvest on the first week of September to maintain the usual freshness in the Soalheiro.

Soalheiro Alvarinho 2015 is a wine in our style, elegant, consistent and intense.

This year the average dates of budburst were within the month of April, which is not typical at all, as the normal period is around March.

The winter-spring period was characterized by some precipitation in the months of October and November (543,6mm) and very scarce rainfall in December 2014 until March 2015 (231.8 mm), which means that it was a dry winter. We also had a very cold period from December to the end of February with low average temperatures, (7,48ºC), which were highly influenced by very low minimum temperatures in the same period (2,74ºC).

The average temperature rose in March and the first half of April to 11,5ºC and 15,8ºC respectively, which allowed the budburst to occur.  Weather conditions at flowering were generally very good with high temperatures and some wind, favorable to fruit set.

In this growing period of 2015, these weather conditions were responsible for the faster development of the vine when comparing with last year, from flowering (-4 days) to the veraison (-3days), recovering the delay of the budburst (+13 days). Much of the month of May and the months of June and July, recorded high temperatures (maximum between 25.0 and 37,0 ° C) and no precipitation. The month of August was also hot and dry.

The weather conditions described above also simplified disease control in the vineyard throughout the year, keeping the grapes in an optimal state of health at the time of harvest. In general the yields per hectare were normal, with grapes being of high quality. Our harvest took place between 2 and 29 September. Grapes were picked in optimal sanitary conditions and with excellent maturity (technological, phenolic and aromatic).

The wines are very balanced, with high intensity, quality and aromatic persistence. The structure of the wine is characterized by good mouthfeel and a very crisp acidity, giving the wines from this harvest a great freshness and elegance.

The rain recorded in the winter months in the Vinhos Verdes region was less than in 2014 but sufficient to replenish water reserves in the soil. Almost from the start of spring until the summer, the weather was warm and dry, with little rain, but the vine held up well reaching veraison with perfectly-formed clusters, but smaller grapes.

Summer was also dry, with temperatures that never got too high. But, by the end of ripening, the vines at Quinta de Azevedo, near Barcelos, were already suffering from water stress.

Heavy rains fell on 12th and 13th September which did not affect the quality of the grapes and even helped to achieve an excellent ripening. The lack of water in the soil at the end of the ripening stage reduced acidity to optimum levels and an alcohol content which was also within the desired levels, not exceeding 11.5⁰ alc./volume.

The Quinta de Azevedo harvest began on 15th September, a week earlier than last year and took place at a good pace until the last grapes arrived on 26th September.  According to Miguel Pessanha, winemaker responsible for Sogrape’s Vinhos Verdes, the grapes were in excellent health on arrival at the winery and the harvest took place without any rain.

Compared to last year, there was an increase of between 10-15% in the production and the quality of the wines from the grape varieties planted on the estate, with particular focus on Loureiro, which is very promising. As for the wines produced at Quinta de Azevedo in 2015, Miguel Pessanha defines them as very aromatic, with a great balance of alcohol and acidity achieved.