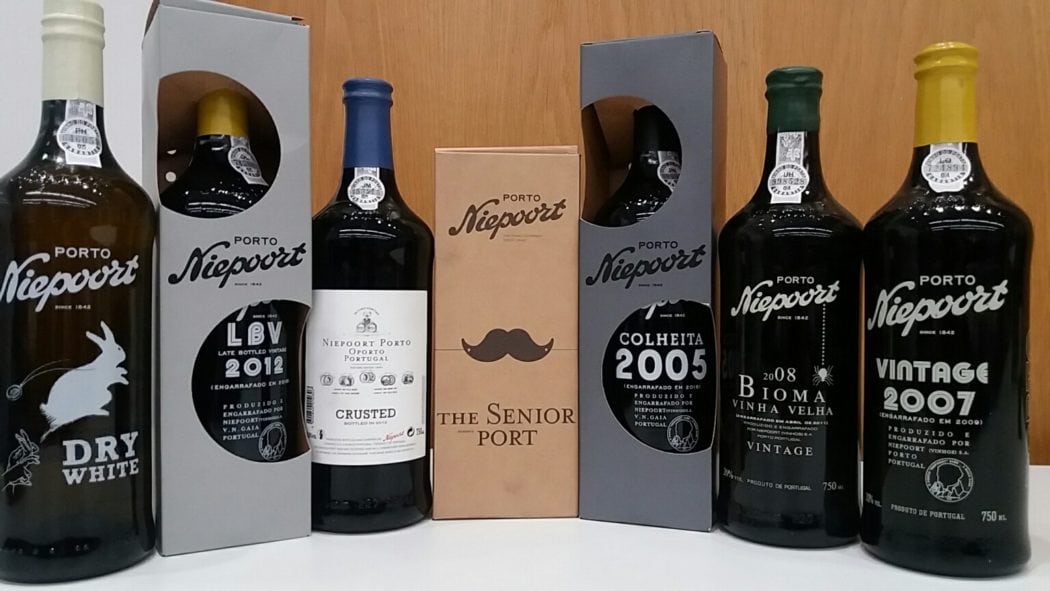 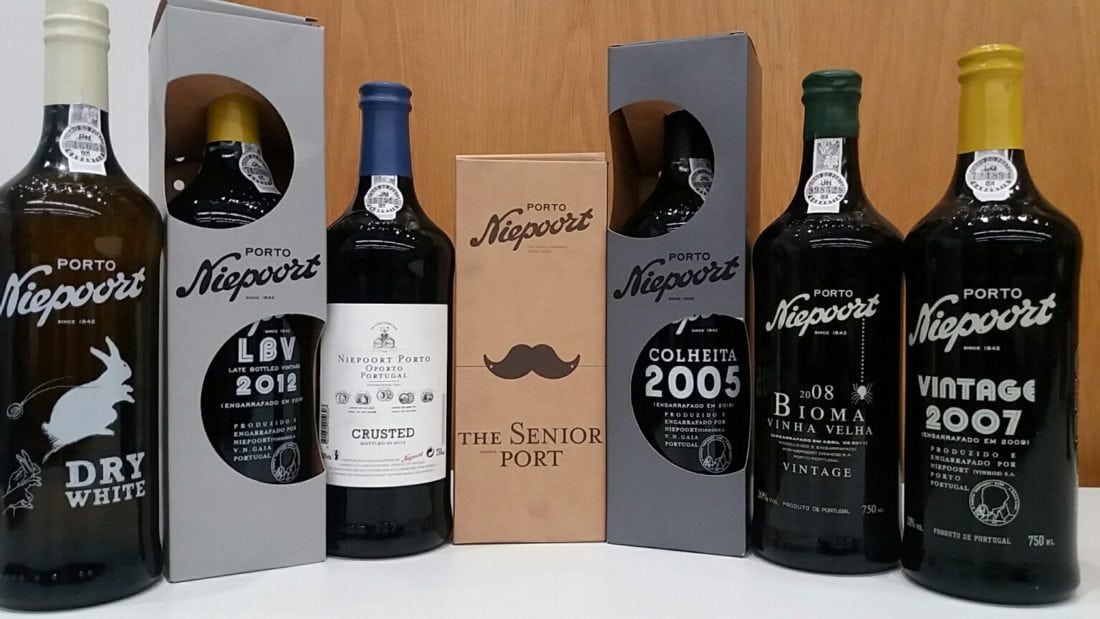 I’ve said it before and I’ll say it again, Port is not just for Christmas, it’s for life!  As my Niepoort tasting this week for National Westminster Bank’s Wine Society demonstrated, Port comes in a range of year-round styles, our first – Niepoort Dry White Port – the perfect summer aperitif – check out my tasting note here.

But inevitably, the festive season puts the focus on Port like no other, so here are my highlights from the Niepoort tasting followed by a round up of my Port picks of the year.   I shall cover Madeira next week.

Niepoort Tawny Colheita 2005 – so silky and elegant – mellifluous is the word!  I can well understand why Niepoort bottled this honeyed deliciousness earlier than usual (after 8 years not 10).  Melts in the mouth.  I came back to it with the creamy blue cheese at the end of the tasting – pitch perfect.  RRP £37, stockists include Weavers of Nottingham, Reserve Wines, Robb Brothers Wine Merchants

Niepoort LBV Port 2012 – much as the 2011 is a tour de force, for drinking now this unfiltered LBV perfectly captures the easy charm of this vintage.  Deep fruited but fresh with plenty of lifted floral and spice notes.  Which is not to say it won’t age.  Check out my notes here on a vertical of Niepoort LBV back to 1975.   RRP £20 at Butlers Wine Cellars, Corks of Cotham, Roberts & Speight

Niepoort Crusted Port (2012 bottling) – given that the base of this non-vintage Port is Pisca 2010 (see the next tasting note), it should come as no surprise to regular readers that this Crusted impressed. Indeed, no Vintage Port – Bioma or classic – was declared in 2010 much, I suspect, to the benefit of this one.  A feast of opulent fruit with perfumed blueberry and the deep-seated spiciness which is a signature of this vineyard.  Niepoort reckon it has the stucture to age for several decades.  Well I won’t be giving that a try, but it certainly has oomph.  RRP £30, stockists include Bottle Apostle, SH Jones, Field & Fawcett

Niepoort Bioma VV Vintage Port 2008  – sourced exclusively sourced from the 80-100 year old plus Pisca vineyard which has been the backbone of Niepoort Vintage Port for half a century, this highly characterful, super-spicy single vineyard (yes single vineyard, not single quinta/estate) Port – my star of May’s vertical tasting – still blows my socks off.  It’s the perfect gift for the serious Port or wine lover with a love of the unique and singular.  RRP £85, stockists include Vintage Wine & Port, Duncan Murray, Bottle Apostle

Niepoort Vintage Port 2007 – I can remember being entranced by the florality and elegance of this generally declared vintage – so very different from the previous one (2003).  I also remember Dirk Niepoort’s response to my question about the ageability of these elegant Ports.  For him the freshness (the product of a mild summer) will drive their ability to age.  And so it would seem.  This Port is still so floral – perhaps more into orange blossom/oil than violets, but with great fruit purity and finesse.  Perfectly broachable now and will keep.  RRP £65, stockists include Bottle Apostle, Uncorked

My Port Picks of the Year 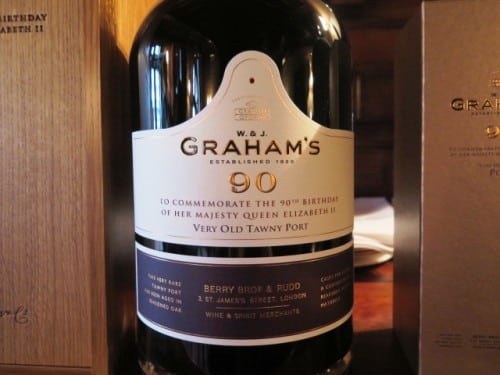 The art (or one might say alchemy) of blending has produced a Port of beautiful precision, potency and persistence (you’ll find my notes on the component parts/background to this wine here). A tangy nose has caramelised orange and spicy orange peel lift.  In the mouth incisive but well integrated acidity keeps the sweetness in check and produces a silky, seamless flow of delectable flavours – fleshy dates, dried apricot, tangy citrus, toasted almond, cinnamon and deeply flavoured wild honey (Mel das Terras Altas do Minho?)  Very finely executed, with great energy and focus.  Stunning if a little rich (blue?) for most of our blood at £700/bottle at BBR

From a generally declared vintage, as you might expect, the ’66 has greater depth of colour and flavour than its predecessor, the ’65.  A hint of iodine on the nose is fast subsumed by its vigorous charge of dried fig, rum and raisin, liquorice, smoky hazelnut and richer macademia.  More delicate bourbon vanilla  and cafe creme notes linger for an age on the smooth, honeyed finish.  An outstanding single harvest Tawny. £147 at Divine Fine Wines, £150 at Hennings, £178 at Hedonism 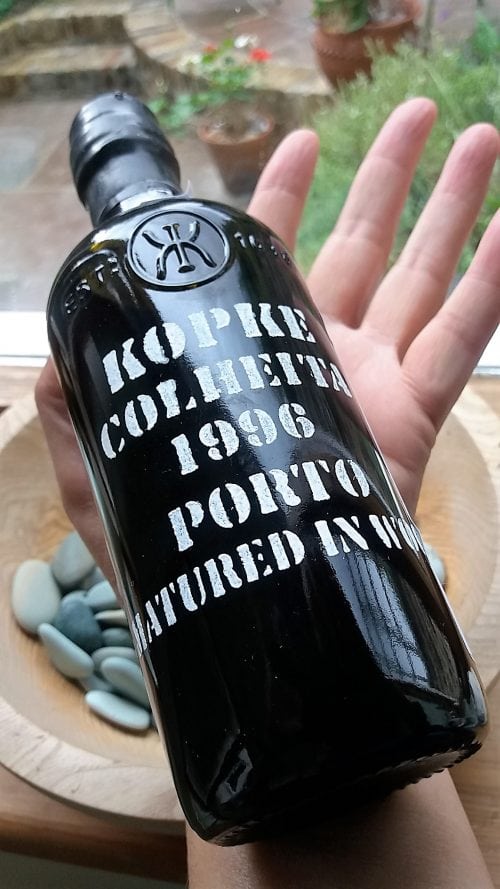 A bright russet hue with a creamy, praline nose cut with juicy, spicy plum fruit.  The liquorice-edged plum makes for a juicy, bright attack and balanced finish.  The creamy praline brings richness, complexity and reverberating, nutty intensity to a long finish.  The perfect way to celebrate a 20th anniversary.  Great on its own; I enjoyed it solo and with homemade plum and almond cake.  Yum.  £30 Marks & Spencer (35cl bottle)

If you’re more likely to be scouting out deals in the supermarkets, my pick would be Sandeman’s 20 Year Old at Waitrose.  A ruddy hue with a marked freshness to nose and palate and clean finish.  It displays classic dried fruit (plum, apricot, orange peel) and nut (hazelnut and toasted almond) flavours with delicate barley sugar and salt caramel nuances, which amplify with time in glass.  Very well balanced indeed. I can understand why the label focuses on savoury food matches (foie-gras, salty [Roquefort?] vol-au-vent) or a fresh peach. Hmmm, vol-au-vent – I feel a retro-70s dinner party coming on!  20%  RRP £38 at Waitrose & independent retailers; currently £29.99 at Waitrose (20% off).

A robust yet rambunctious Tawny which I only discovered last month when Francis Flavin of Davy’s brought a bottle to a Portuguese dinner I was hosting.  It features older fruit than your average 10 Year Old Tawny Port so is more complex and characterful.  Also because it is un-filtered.  Currently on deal at Davy’s at £27, down from £29.95.

Serving this delicate, ever so refined White Port from 1973 chilled showed off brilliantly its amazing freshness, purity and line.  Not words which I’d typically associate with an aged Port like this which has spent so long in wood.  It has a lick of honey to its almond accented dried stone and apple fruit.  Even the stone fruit is delicate – as if on the cusp of ripeness.  Persistent acidity makes for a long, beautifully balanced finish with a hint of orange peel spice.  Wears its 108.1g/l of residual sugar very well indeed (especially chilled).  Very impressive.  20% abv.  You’ll have to go to London’s hottest Portuguese diner for this – no hardship! £9.90 by the glass at Taberna do Mercado; it is imported into the UK by Casa Leal.

I’ve focused on 2011 LBVs because they punch above their weight, are ready to go (but will age) and are terrific value for money.   That said, while checking prices for this post I noticed that Davy’s have a great selection of mature Vintage Ports at very sound prices – e.g. Fonseca 1994 Vintage Port – a 100 pointer in The Wine Spectator-  down to £85.  Well worth a look! 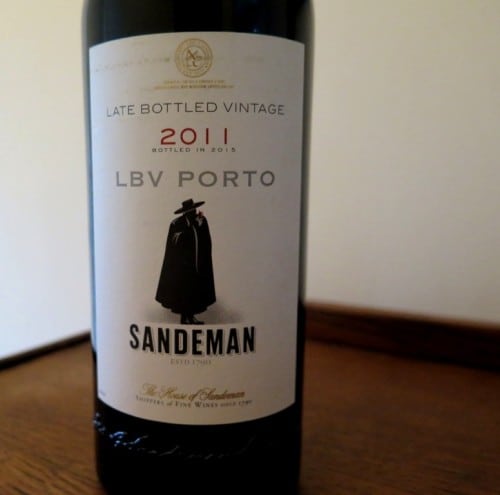 This deep crimson, unfiltered LBV, part foot trodden in lagares, part pumped over in vat, is a grippy, peppery, well-structured blend of 55% Touriga Franca, 25% Tinta Roriz, 20% Touriga Nacional with cocoa-dusted sweet raspberry, juicy black berry/currant and esteva.  Though it’s very expressive now, with a lively firecracker peppery finish, a chassis of firm but fine, powdery tannins and fresh acidity suggests it will age very well into the mid-term. £18.69 at GP Brands & currently 25% off at Waitrose, down from £15.99 to £10.99 – ludicrously good value for money.

Also made by Sottomayor (and owned by Sogrape), the Ferreira is a blend of 55% Touriga Franca, 25% Touriga Nacional, 10% Tinta Roriz, 5% Sousão, 5% Tinto Cão.  It’s a very deep hue with an intense concentration of blackcurrant and a tangible charge of fine iron filing tannins on the attack and going through.  Super-youthful, it finishes quite dry (as in one’s impression of sweetness) and firm with a lively green, peppery edge.  A bundle of energy with heaps in reserve.  £18.95 at Oakham Wines.

This unfiltered blend of Touriga Franca (55%), Touriga Nacional (35%), Tinta Barroca (6%) and Sousão (4%) was fermented in lagares and bottled in April.   Very focused, tight and concentrated, its reserves of ripe red and black fruits are well balanced by notes of bitter chocolate and an impressive (fresh) acid/tannin structure.  Very good. £17.05 at The Drink Shop

Sourced from old field blend vines, this is another terrific lagares-fermented, unfiltered LBV.  Very floral, with violets and rock rose, even a hint of mint, to its deep seam of very precise, brightly polished blackcurrant fruit.  Grippy tannins and fresh acidity make for a vivid wine with lots of gas in the tank.  Yet it retains elegance and poise. Beautifully done.  On deal at £13.95 at Great Western Wine, £15.94 at The Drinks Shop, £15.95 at Slurp

I very much liked the definition and intensity to this LBV’s pure charge of blackcurrant fruit. Impressive back palate minerality to its long finish is, however, the trump card up its sleeve.  An elegant, very drinkable but sophisticated LBV.  £18.99 at Naked Wines (£14.49 for Angels – a real steal) given it’s £14/half bottle at Borough Wines.

Very concentrated and heady, with sweet black fruits, orange blossom and bergamot lift to nose and palate.  Fine chocolately tannins reinforce its generous, most bountiful character.  An LBV with hipsway; it will keep, but resistance may well prove futile!  £14.61 at The Drinks Shop, £14.95 at The Whisky Exchange

This LBV may be filtered but, with more concentration and structure than usual, it doesn’t taste it.  It’s classic Taylor’s – quite buttoned up after the Fonseca (though it shares its beguiling orange blossom perfume), with sinewy tannins to frame its juicy, fleshier plum and blackberry fruit.  £11.95 at Four Walls Wines, £14.25 at The Whisky Exchange, £14.95 at Tanners and on deal at £10.50 down from £15 at Waitrose, though vintage not specified.