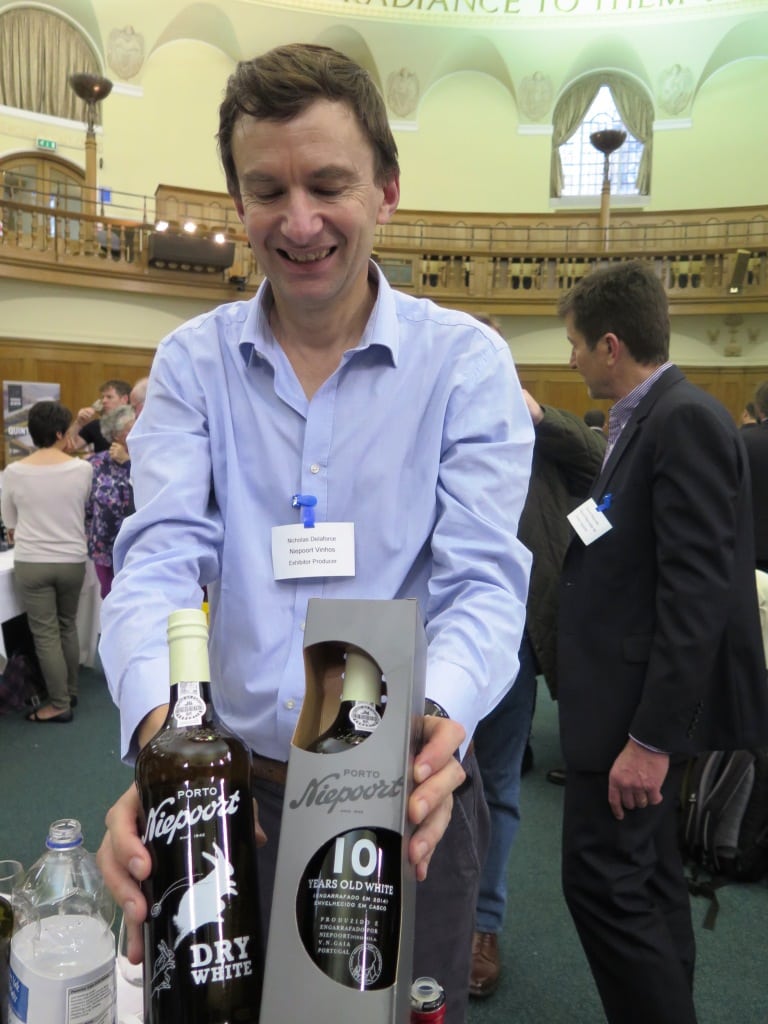 My modus operandi at The Big Fortified Tasting is to scan the catalogue for new (to me) releases, my first focus.  And very often (leaving aside the masterclasses), I don’t get beyond that.  This year, there was plenty of shiny new talent to catch my eye – Madeira’s first Tinta Negra-labelled Colheita from Barbeito, 2013 Vintage Ports and even some un-golden (colour-wise) oldies – mature bottled- aged Ports from the Symington stable, about which more later.  As I tasted through Niepoort’s wood-aged Ports with Niepoort’s Port winemaker Nick Delaforce, I was reminded that sometimes it pays to refresh one’s memory of the stalwarts in a range.  Here are my notes on Niepoort’s White and Tawny Ports, all of which shared a strikingly elegant balance. Dry styles of white Port are in fact dry-ish – this one has 43.4g/l residual sugar.  Recently I asked Dirk Niepoort if he’d every made a really dry white Port.  Here’s his answer: “we used to have a very dry port called “ultra dry” which was really dry. I personally never liked it and thought it was over the top, but it was my father in fact who stopped making / bottling it in the 90´s when I was already working with him.  I have thought about it more recently again but still I’m not sure that I like the balance of the bone dry white port.  We will see what will happen. We have been working a lot in the last 10 years around white ports – the vineyards, the making and also particularly the ageing.  Basically again, going back to the past and learning with the “old”.”  And it shows with this characterful entry level dry style.  Delaforce explains it’s made the traditional way with lots of skin contact, sometimes foot treading in lagares, then aged in small old wooden casks.  This non-vintage blend sees an average of 3.5 years in cask in Vila Nova de Gaia.  It’s the savoury (nutty, spicy) and pungency ( a touch of greeness, even nam pla hints) which lend balance – that dryish-ness of so-called Dry White Port.  Very good.

Like White Rabbit (but, of course, sourced from red, not white, grapes) Tawny Dee is aged in small oak casks for an average of three and a half years in Vila Nova de Gaia. The grapes are predominantly trodden in lagares.  It’s a ruddy red hue and its appearance is reflected in the traces of sweet dried plum and fig fruit on the palate.  Gently nutty (think plum and almond tart) with liquorice spice, it’s a warm hug in a glass.  95.9g/l residual sugar.

From a classic Vintage Port year (general declaration), this concentrated Colheita Tawny was aged in traditional oak pipes in Vila Nova de Gaia until bottling last year (twice as long as the legal minimum of 7 years).  Despite its self-evident concentration and structure, the 2000 is very elegant, with a lifted spiciness (even a trace of green peppercorn), smoky oak and gentle rancio/nutty characters.  Very long and lingering in the mouth with exemplary balance of spirit.  Intense.  99.2g/l residual sugar.

As for the 2005, despite both being younger and having reached bottle sooner, it simply melts in the mouth.  Gently nutty and spicy – velvety of mouthfeel – yet with a lively undertow of grapefruity acidity to balance. A delicious drop goes a long, long way.  113g/l residual sugar

A blend of different wines averaging 20 years.  Though quite pale, this is an intense Tawny – very deep – with seamless layers of dried fruits and rich hazelnut – think creamy (liquid) praline – characters.  Satisfying yet still so balanced and persistent.

Richer, spicier and nuttier than the 20 Year Old with great resonance – a cedary, woody timbre – to the palate.  But not a hint of drying out.  This 30 Year Old retains a delicacy – lovely lift and echo.  Very elegant.