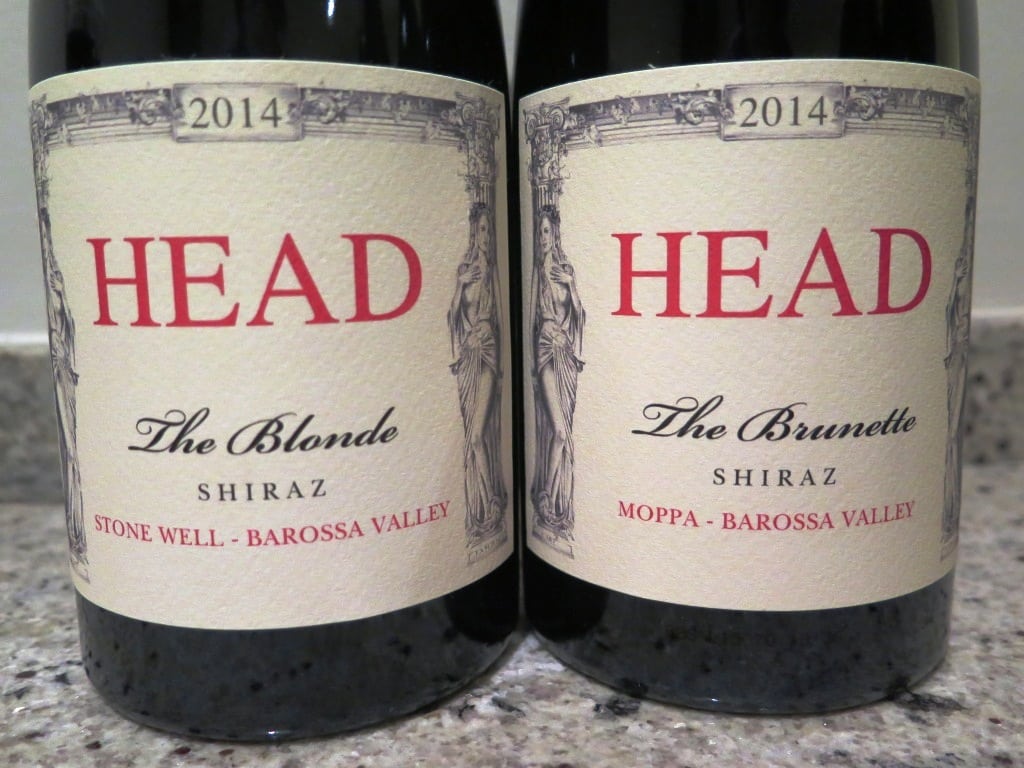 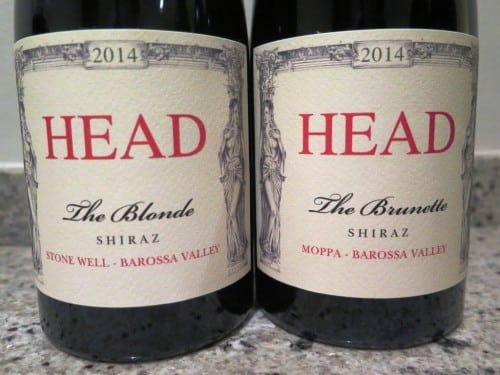 Alex Head’s first newsletter of the year reminded me that I’d not written up his excellent Barossa reds.  I’d hoped to catch up with him in the Barossa last August but, with a baby on the way, he kindly sent samples to me in the Hunter Valley where my trip concluded.  Founded in 2006, Head Wines focuses on single site Rhône varieties from sustainably cultivated vineyards.  I liked the way the labels – very classic – flag provenance.

The wines are naturally fermented with some whole bunch, matured in larger format barrels and bottled without fining or filtration. Cutting edge then, if not at the super-sharp end of the spectrum where the likes of Fraser McKinley (Sami-Odi), Abel Gibson (Ruggabellus) and Peter Schell (Spinifex) have gone for an early-picked sappy/crunchy style.  Rather, with classic Barossa generosity of fruit and intelligent use of new oak, Head’s wines are perfumed and curvaceous – super-sensual  – with a perfectly gorgeous mouthfeel.  Yet with lovely line and balance too; though hardly modest, the alcohol is unobtrusive. 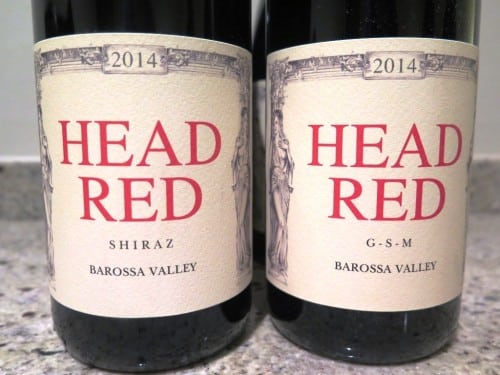 Head Red is, says Alex, “the best value blend of GSM I can make each year.”  It has enticing savoury, earthy notes to nose and palate with orange peel lift and sweet red cherry and black berry fruit. The Mourvedre, more pronounced on day two, brings spice and subtly tapering, textural tannins to the creamy sweet fruit.

It’s good to see the Barossa Old Vine Charter invoked on the labels of this wine and the next.  Head works with several old vine Grenache vineyards, including one in Vine Vale from 1850 – I’m guessing Marco Cirillo’s excellent vineyard, since he used to work there.  However this wine comes from the best performing Barossa Valley Grenache vineyard each year.  In 2014 it was a from a significantly younger plot near Krondorf, planted around 1942 on red and brown cracking clays at 250m on the eastern ridge of the Barossa Valley.  The vineyard was split hand-picked at 14% and 15% potential alcohol over a week. This is a deep-fruited, concentrated but highly expressive Grenache.  Fifty percent of the fruit was green harvested and shoot thinned, so why not show off its sweet and creamy black cherry, blueberry and tangier, pippier fruits of the forest.  Pretty floral notes build with time in glass.  Super svelte and lingering.  This wine was fermented with whole berries, 15% whole-bunch and hand plunged and foot trodden twice daily for 20 days. It was racked once during elevage of 12 months in larger, older barrels. 14.5% 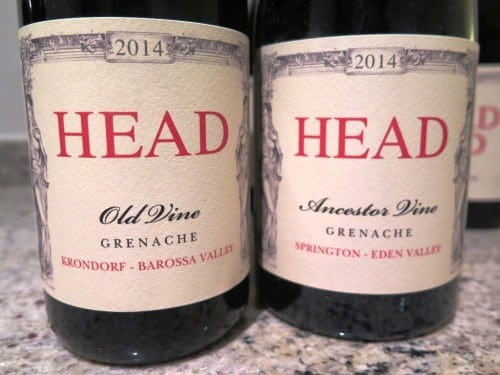 I am not sure if I have tasted a pure Eden Valley Grenache before.  Scratches head…. Anyway, this examples comes from a 155 year old vineyard on brown sandy loam at 400m near Springton to the south of Eden Valley.  It’s a very different animal, with a finer acid and firmer tannin structure.  Earthier too, with the scent of loamy, almost chocolatey earth and savoury beetroot, but with no sweetness (cocoa).  The tannins cradle the sweet red berry and cherry fruit and provide length, anchoring the flavours on a long, long, firm, dry (for Grenache) finish.  With an old vine edge of woody, dried spices and dried herbs, it seems to transmit their very essence – gnarly and complex – no vertical shoot positioning here.  Ditto on day two.  Terrific. It was whole berry fermented with 30% whole bunches in a wooden vat and hand plunged and foot trodden twice daily for 3 weeks. Racked once during elevage of 12 months in used thick staved 600L demi-muid “with a small addition of old vine mourvedre for balance.” 14.5%

Head describes this cuvée as “a barrel cull from Barossa vineyards including ‘The Blonde’, ‘The Brunette’ and ‘The Contrarian’ single vineyard wines.” It features 10 separate vineyard parcels from Stone Well, Marananga, Greenock, Light Pass, Vine Vale and Lyndoch and a splash of Grenache, Mataro and Cabernet Sauvignon from Greenock. There’s no shortage of complexity or balance here – great blending! It has a good twist of the pepper grinder to its juicy black berry and plum fruit, with smoky charcuterie and floral notes going through.  Very delicious and, with lovely freshness and lift (perhaps with a little help from its Cabernet and Mataro friends?) it seems to be the driest of the wines, with the most defined fruits.  It was matured for one year in 20% new oak foudre and old French 300l hogsheads and bottled unfined and unfiltered.  14.2%

I’m drawing no long bow when I say Head’s tongue in cheek Shiraz homage – ‘The Blonde’ and ‘The Brunette’ – put me in mind of Guigal’s rather flashy but svelte Côte-Rôties from ‘Blonde’ and ‘Brune’ soils.   The Blonde single vineyard is located near Stone Well at 250m on the Barossa’s western ridge.  It has a myriad of soil types including red-clays and grey sands (blonde in colour) running the length of the vineyard.  And yep, this is the more ‘feminine’ of the two with violet riffs as well as really meaty, peppery overtones to its curvaceous sweet crushed red berry and juicy plum fruit.   A shower of pepper and deep seated, resonant savoury spices greet you on day two.  Textured, grainy but ripe tannins lend a velvety quality to the palate.  Gorgeous heady (no pun intended) stuff! Apparently Head sometimes includes between 2-5% Viognier skins in the (part whole-bunch) ferment “for aroma, to soften tannin, set colour, add texture, freshness and more complexity with bottle age.” Following a two week fermentation with daily foot-treading, hand-plunging and pump-overs, The Blonde was matured in oak is for a year in specially selected 300l French hogsheads of which 33% were new. 14.1%

I first read about Head when I was researching a feature on the Barossa for Imbibe back in 2011, focusing on the diversity of the Barossa’s terroir.  You can read it here but this wine really lifts off the page Ian Hongell’s comment about the Barossa not being “one flat paddock.”  Why?  Because it is the highest altitude vineyard on the Western side of the Barossa, at approximately 340-380m.
The soils include deep red clays and large ironstone rocks (“Brunette in colour,” says Head).   It’s not just the soils which are darker than The Blonde.  So is the wine itself – purple to The Blonde’s crimson.  The nose is tighter, but there is no doubting this wine’s power in the mouth.  It has terrific thrust to its blackcurrant and black cherry fruit.  Fruit which is subtly threaded with white flowers and spice – more aftershave than perfume if I’m going to continue the metaphor! Bony, ironstone tannins with a hint of bloody tang make for a tapering, drier finish – like the nose, tighter.  On day two, the fruit seems more tempered – a slinky, slender, cashmere sheathe for this wine’s spicy, structured, backbone of tannins.  Great architecture.  Exudes power, but thrillingly broachable now.  14.3%