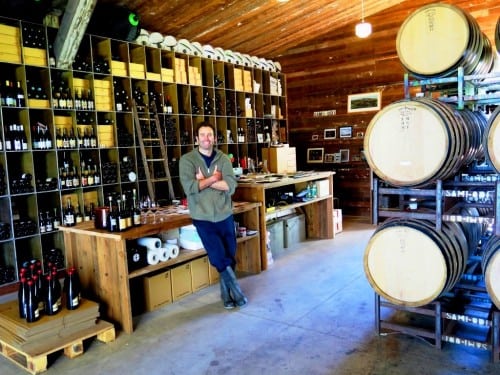 Did anyone else experience lashings of shed envy watching Channel 4’s Amazing Spaces Shed of the Year?  Well multiply that by at least 10 and you’ll know how I felt about New Zealander Fraser McKinley’s wine “shed” at Sami-Odi in the Barossa.  And, of course, its vinous contents.  How I would love one of those at the bottom of my garden. 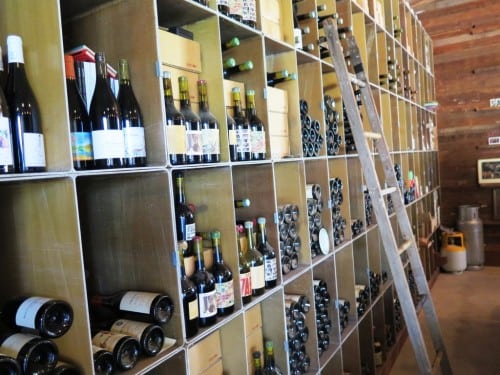 The architecture graduate turned winemaker has a keen eye for the aesthetic. Whether it’s his grandmother’s matchbox collection or the title, type-face and texture of a second-hand book which inspired Sami-Odi’s ‘Baby Tui’ & Odi DW-OLD labels. Even the arrangement of Sami-Odi and his eclectic collection of wines in shelves he custom built from fibreglass submarine battery cases (like you do!)  It’s kind of apt when you consider that the name Sami-Odi encapsulates McKinley’s love of found things.  Before settling in the Barossa, he and his wife admired a boat in Turkey named Sami, while Odi was the title of the second-hand book which he stumbled across in Rome.

As you might expect, the same creativity and attention is lavished on producing the Sami-Odi range of Barossa Shiraz. Which is why, for McKinley, small is beautiful – Sami-Odi wines are made in tiny quantities.  Although he could doubtless sell them many times over, he tells me he has no desire to increase volume.   Why? Because, as his muddy Landrover and wellies suggest, “I wanted everything to be farmed by me and organically, so it’s just a few rows here and there…I want to do better, not more. I want to be proud of them [my wines].”  Last year’s production was 620 cases; this year he made 680 cases. In 2003, the first Sami-odi wine came from four rows of Shiraz in the Hoffmann family’s Dallwitz vineyard in the Barossa’s Ebenezer sub-region; the vines are planted on “really red” clay over limestone. McKinley had come across the vineyard when he worked for Torbreck and has stuck with it (or as he’d mostly likely put it, the Hoffmanns have stuck with him).  He currently farms 2.8ha of Shiraz from vines planted prior to 1912 and in 1927, 1960, 1995 and 1996.  All come from the same genetic material – the original plantings which went into the ground some time between 1888 and 1912. Pointing out that the young vines are always ready to pick 2-3 weeks earlier, he likes the mix of old and new – young vines “for higher acid,” older vines “for substance.”

Although Ebenezer is in the power end of the valley, McKinley is a fan of early picking for structure, purity/fruit brightness –“I like a lot of crunch.”  So although Ebenezer’s black (fruited) thumbprint comes through regardless of picking date (only once has he picked as late as March), Sami-Odi wines are less ‘sweet’ and less weighty – less flesh, more bone if you like.  They are quite unique in capturing the Barossa with levity (and without greeness or leaness) – as McKinley puts it, “dialling back to 6/7 out of 10.”

Telling me he loves the idea of picking earlier and earlier, this fan of Marcel Lapierre’s Morgon Beaujolais enthuses, “I’m trying to make wine with ideals in my head.”  This year, he picked as early as 16 February and believes he could still have picked earlier and not had anything too green.  McKinley explains crop thinning and shoot thinning is critical to picking early – “elsewhere, fruit was still green and had not even finished veraison.” 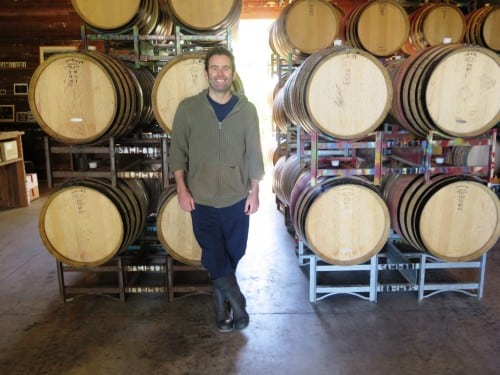 Preserving ‘le crunch’ in the winery involves whole bunch fermenting in closed tank with some carbon dioxide to allow for some carbonic maceration à la Beaujolais.  He generally leaves the Shiraz on skins for 2-3 weeks.  It then goes into two hand-cranked basket presses and the resulting still fermenting press wine is “bucketed” straight to barrel via a funnel. It finishes the primary ferment in barrel on the lees; McKinley tops up very frequently during the 18 month elevage (which preserves fruitiness).  All his barrels are 3-4 year old and, these days, comprise 228l Francois Freres barriques.  The outcome? Wines that are juicy, scented and spicy, with a wonderful sheen of pure, black Barossa fruit.

Looking ahead, McKinley has plans to close plant the one hectare plot on rocky yellow clay “out back,” behind the shed.  The Angaston (Eden Valley) site is west-facing so, he says, “sunshine will be a viticultural hazard.” Describing it as “more a life’s work than any great hurry,” he is collecting cuttings.  Watch this space!

As for the current range, Swig bring a small allocation into the UK.  They are bottled under cork because, says McKinley, “I’m concerned about high levels of carbon dioxide.”  I guess a relatively permeable closure like cork (as opposed to screwcap) can mitigate/dissipate this more successfully. Like Sean Thackrey’s La Pleides, which I wrote about on Wednesday, this is a non-vintage blend.  Similarly, the number refers to the fact that this is the 4th time it has been made.  Referring to another favourite wine, Jacques Selosse’s Substance (a solera Champagne), McKinley likes the idea that, by removing vintage variation from the equation, you can attain “the most transparent look at the terroir.” In fact “Little Wine” was conceived as a response to the skew of the “tricky” (cool, wet) 2011 vintage.  In 2013 and 2014, the skew was frost, which stunted growth and resulted in a lack of the pulp “which gives you the softness in a wine…balance.” This 4th Little Wine is a blend of 2012 (17%), 2013 (44%) & 2014 (39%); each vintage was vinified seperately, back-blended then bottled.  It has a lovely depth of creamy blackberry and currant fruit with some spicy, peppery grunt and fruit tannin beneath. Bright and vibrant for a non-vintage blend – nice topping up! 14.4%; 5138 bottles.

The fruit for this vintage Shiraz is sourced exclusively from the Hoffmann’s oldest block, which is named Dallwitz Old after the Dallwitz family who owned this block until the 1940s.  In 2013, even though this aged block was heavily frosted and McKinley had to prune it and start again, it fared better than the younger vines – Odi is made from 100% second crop fruit which, he observes, “was like small crops because of its acidity retention.”  Raven blue/black in hue, it certainly betrays no sign of weakness with its silky, bright blackcurrant fruit and powdery, furry almost, tannins to its coal-edged finish.  Perhaps that should be kohl pencil, because this wine has lovely definition and length.  14.4%  3074 bottles. Tui is the name of McKinley’s daughter who was born in 2012.  Raw and crunchy Tui, the wine, fair bursts with the energy and crackle of youth – great potential.  Made from a barrel selection of “the most individual and prized casks” (and comprising old and young vine fruit from the original vines and 1995 and 1996 plantings), there’s oomph behind its fresh, crunchy shell and, within, slinky, slippery, very spicy red and black fruits.  I loved the interplay of skins and pulp in the mouth, the one drier, more textural, the other sweet-scented and super-juicy with a hint of saline.  14.9% 4288 bottles.