Ten years apart, poles apart stylistically and, indeed, some 17,000km apart, my April Wines of the Month are a contrasting pair.  But they have a fair bit in common too.  Yes deliciousness.  A prerequisite, one might say, for April Wines of the Month status.  Grenache too.  But mostly they make the cut because they represent such thoughtful, refined takes on grape varieties which can so easily be rustic and over-blown when grown in a warm, dry climate.

Incidentally, while Grenache and Alicante Bouschet are well adapted to warm, dry climates, both my April Wines of the Month come from relatively mild years, with long hang times. 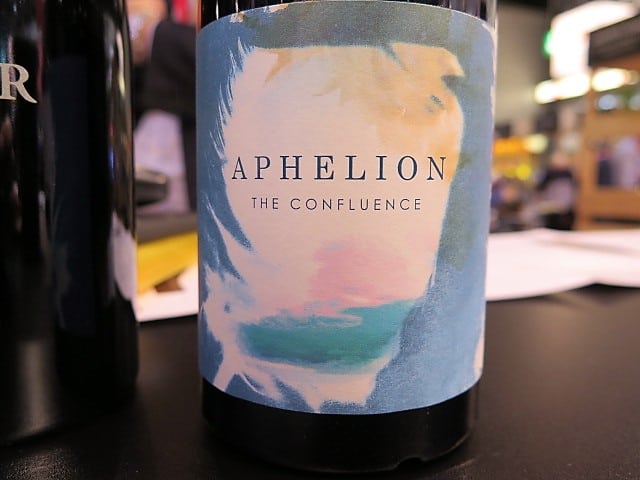 Since founding Aphelion Wine Co. in November 2015, Rob Mack and Louise Rhodes, have put McLaren Vale Grenache from Blewitt Springs (their preferred sub-region) under the microscope, using different techniques (whole bunch, whole berry, maceration on skins) to produce thrillingly different expressions. Their first vintage produced ‘Bunch’, ‘Berry’, ‘Pressings’ and ‘Grenache.’  In 2017, Pressings disappeared (much better as a blend component, said Mack), while ‘Bunch’ became ‘The Verdant,’ ‘Berry’ became ‘The Aromat’ and ‘Grenache’ morphed into ‘The Confluence’ – this skilful synthesis of said techniques.  It features Grenache which has undergone whole berry (60%) & whole bunch (20%) ferment and a portion (20%) which spent 3 months macerating on skins.  Let me tell you 60% + 20% + 20% = 150%.  This is an appetising Grenache, whose levity utterly belies its 14.7% abv.  I’m a big fan of Aphelion’s pared back style (click here for recent notes on Berry, Bunch & Pressings).  The Confluence 2017 has a herbal edge to its crunchy, bright red cherry, currant and berry fruit, with bouncy peony (whole berry carbonic?) florals and a gentle, mineral, sandpapery rub of tannin to the finish.  Finely honed, with line and lovely persistence, I’m not in the least surprised to hear that most of Aphelion’s range goes to the on trade (Rhodes, who publishes winefoodworld.com, recommends pan seared duck with this wine).  Just 240 dozen bottles were produced under screwcap.  AUS $40.  The Knotted Vine import Aphelion into the UK.  (The Confluence was one of six top notch new wave McLaren Vale Grenaches which I showed last month at a masterclass at Prowein, Dusseldorf.  Click here for my notes on all six wines, plus my take on the  truly exciting reincarnation of McLaren Vale Grenache). 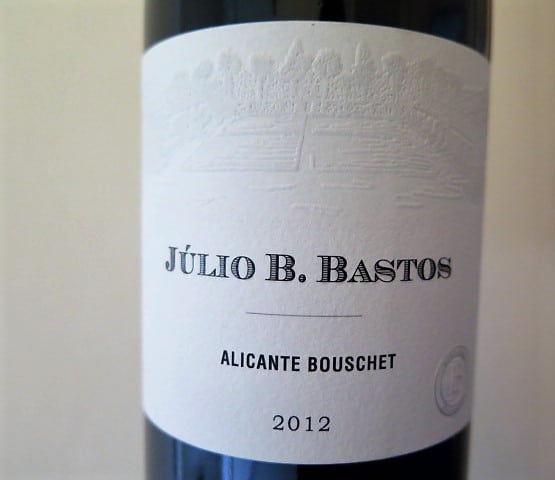 The current 2012 vintage of Dona Maria Júlio B. Bastos Alicante Bouschet – £109 at Hedonism

Plucked from my cellar, this was a fabulous finale to my latest Portuguese Wine School masterclass, which focused on the wines of Portugal’s Alentejo region.  Alicante Bouschet – a rare teinturer (red-fleshed) grape – is a crossing of Petit Bouschet & Grenache.  It was created in France in the mid-19th century by Henri Bouschet but thrives in Alentejo, where it is said to have been introduced by the Reynolds family.  Fittingly, the Reynolds’ descendants produce among Alentejo’s top examples of Alicante Bouschet at Herdade do Mouchão in Sousel and Dona Maria, which brand is based at Quinta do Carmo, Estremoz.   Whilst Dona Maria’s Júlio Bastos intensely regrets being persuaded by his former partners, Domaines Barons de Rothschild, to uproot centenarian Alicante Bouschet in favour of Cabernet Sauvignon, it has to be said that his wines exhibit a certain Bordeaux polish (which differentiates Dona Maria’s Alicante Bouschet from Mouchão’s).  And perhaps absence makes the heart grow fonder.  At any rate, when the partnership finished, Bastos acquired another aged (60+ years old) Alicante Bouschet vineyard from which he fashioned this, Dona Maria’s flagship wine. Given the kid glove treatment, Dona Maria Júlio B. Bastos Alicante Bouschet 2007 was fermented/foot trodden in 19th century marble lagares, then aged for 14 months in new French oak.  It is sleek and intense, still with vivid black currant and berry fruit.  Yet tempered by time in bottle, the fruit (and seamlessly integrated oak) has an elegance – impressive purity and freshness – a shine even.  Svelte tannins and ripe but persistent acidity carry a long finish.  Compared with the relatively rugged, booming Dona Maria Júlio B. Bastos Alicante Bouschet 2012, with its lightness of being – an arc of flavour, versus 2012’s penetrating intensity – it’s as if the 2007 has metamorphosised from chrysalis to butterfly.  Showing all its colours, with a hint of (dried) mint, fruit and fruit and oak spice perfectly entwined, it has a lovely vinosity.  Terrific now and with time in hand.  14.5%

As you can see, we taste some outstanding wines at Portuguese Wine School at Old Spitalfields Market, so do join us for the next classes: