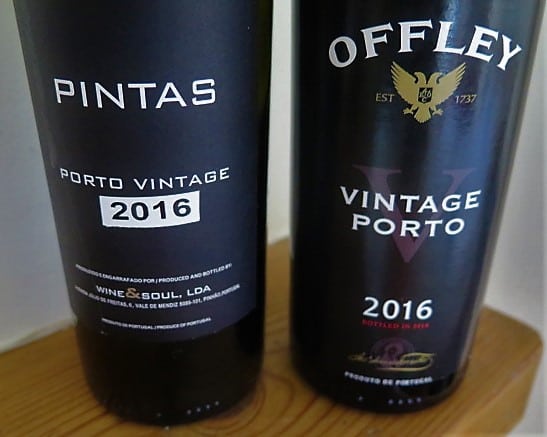 This post follows up my first Vintage Port 2016 report, which focused on ports from the Fladgate Partnership, Symington Family Estates, Quinta do Noval and Quinta da Romaneira.  Here, you’ll find my Vintage Port 2016 notes on Pintas, Churchill’s and Sogrape’s and Sogevinus’ ranges.

Incidentally, reviewing wine merchants’ en primeur offers, the Vintage Port 2016 en primeur campaign looks to have been very successful.  It was a low yielding year and many of the most prestigious ports are sold out, but I’m pleased to say there is still availability for some top ports in this post, including my picks of the bunch, Wine & Soul Pintas Vintage Port 2016 & Offley Vintage Port 2016.

You can find my round up of tasting notes on the last generally declared vintage – 2011 – in this post.  I find Vintage Port from 2016 more elegant, with purer, more defined fruit. 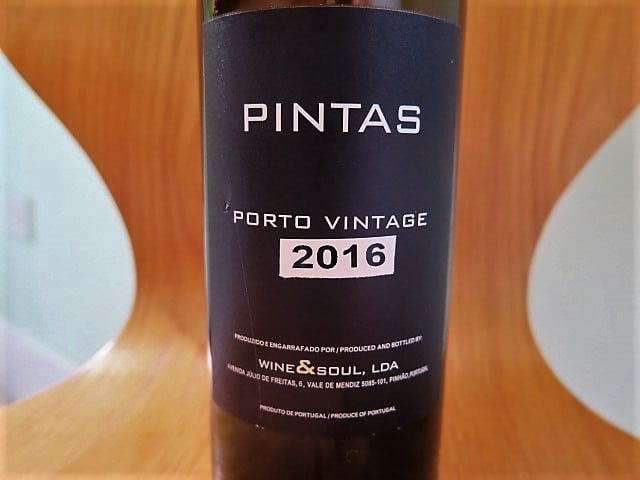 The 2016 is in the same vein in terms of quality, which is a real tribute to this vineyard.  It was one of my top performers at a blind tasting of twenty-three 2016 Vintage Ports at Corney & Barrow and I very much enjoyed tasting it over three days at home.  As I’ve come to expect, it is an imposing port, with terrific structure and bountiful fruit to underwrite its performance over the long term.  Iron fist in velvet glove captures the 2016 Pintas very well.  A youthful, spirity edge to the nose is soon banished by the sheer concentration, complexity and length of the palate.  Bold and bottomless (even on day three), ripe but well defined, fresh, lithe black berry and currant fruit is nuanced with spicy coriander seed, gum cistus and liquorice, exotic lapsang souchong, orange peel, stem ginger and bergamot.  Layer upon taffeta layer of super-fine, graphite, mineral (ripe) tannins build in the mouth, making for an extended finish with impressive underlying freshness – great balance.  A charismatic port with tremendous fruit power, it comes from 70+ year old field blend vineyard in the Vale de Mendiz, Pinhão Valley.  20%, only 3,000 bottles produced. £225/case of 6 bottles en primeur at Tanners 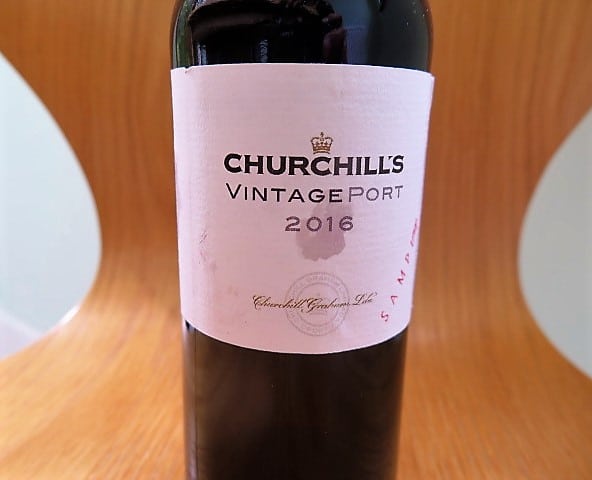 Here is Johnny Graham’s vintage report: The climatic conditions in 2016 in the Cima Corgo and Douro Superior regions were unusual but ultimately beneficial.  After a wet winter and an unusually wet and cold Spring, there followed the usual hot Douro Summer culminating in an August heatwave.  Despite the rainfall earlier in the year, the extreme heat of the Douro Summer had concentrated the juice in the grapes and the yields were low.

The heavy rainfall in the late Spring helped to top up the water table providing the vines with the necessary hydric reserves to support a long, hot and dry Summer.  By early September Churchill’s grape maturation tests showed that both sugar and phenolic maturations were well advanced. All that was needed was dry and cooler weather for the vintage.

By 7th September these conditions were met and they started picking on 10th September taking it slowly and carefully selecting and prioritising the grapes which had reached maturity. Churchill’s final lagar was filled on 8th October.  The resulting wines show an intensity and purity of fruit combined with a vein of fresh natural acidity which gives them elegance and longevity.

I really enjoyed following this young, restrained port’s evolution as it opened up over three days.  Once it shrugged off the initial hit of spirit and tannin, it had a long throw elegance about it, with lovely persistence to its velvety plum fruit and complexing lift and layer of black tea, white flowers, dried roses, chocolate, liquorice and savoury roast beef.  A stole of fine, powdery tannins suggests it will age rather well.  Finishes long, with a salty minerality.  Nice freshness and persistence.  Total production is 4,000 x 6 bottles.  £198/6 bottles en primeur or £210/12 half bottles en primeur at Tanners, £440/12 bottles en primeur at Farr Vintners

All three Sogrape ports from Sandeman, Ferreira and Offley were tasted briefly at The Big Fortified Tasting and Corney & Barrow blind tasting in May, then over three days at home in July.  I also tasted the Sandeman in June during a visit with Luís Sottomayor at Sandeman’s Quinta do Seixo.  He told me that he thought he’d made some of his best ever ports in 2016.  Now there’s a recommendation – one which certainly resonates for me with the Offley – a powerhouse in 2016!

Here is Sottomayor’s report on the vintage: winter was mild and dry. Continuous rainfall at the end of winter extended into spring, accompanied by periods of low temperature. These factors affected flowering and contributed to unusual incidences of disease on the vine, especially mildew. Summer was mild, with some surges of high temperature and cold nights, and this helped ensure that the final maturation period was long and balanced. The resulting wines were of excellent quality. 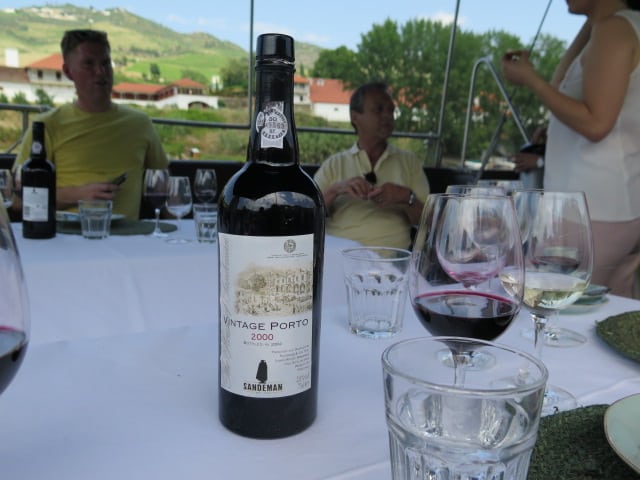 (Incidentally, enjoyed over lunch on the river during June’s Seixo visit, Sandeman Vintage Port 2000 is drinking beautifully at the moment, with supple black fruits and a good 10 years plus in the tank yet). 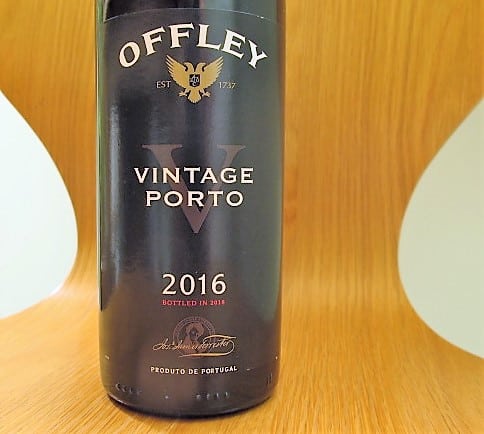 This is a big boned Vintage Port and I was glad to have the opportunity to re-taste it.  I’d found its power glancing at The Big Fortified Tasting.  It was difficult to get a purchase, even on day one of the sample tasted at home though, at the Corney & Barrow blind tasting, I gave it high marks and it came out on top overall.   The tannins are deeply impressive – long and spicy (peppery), fine and mineral, ripe but present.  They rise relentlessly in the mouth and, while they have grip, perhaps backbone is a better word, the tannins are not in the least aggressive.  More anchor-like, centring this port and firmly embedding its flavours.  As it opens up, there is no shortage of complexity, with pronounced liquorice, delicate coriander seed (something of a signature note of this vintage for me), bergamot and floral notes to its cassis, black berry and cherry/cherrystone fruit.  On day three, it remains imposing, with booming tannins, but there’s detail too, with yet more delicious layers of flavour – gingerbread, orange peel and blossom.  Big, but with everything in place, it is a keeper.  This exceptional vintage of Offley is a blend of 45% Touriga Franca, 45% Touriga Nacional, 10% Tinta Roriz sourced from wine estates in the Pinhão area.  20% abv, Total Acidity: 4.4 g/l, Residual Sugar: 100 g/l, pH 3.7  £425/12 bottles en primeur at Farr Vintners 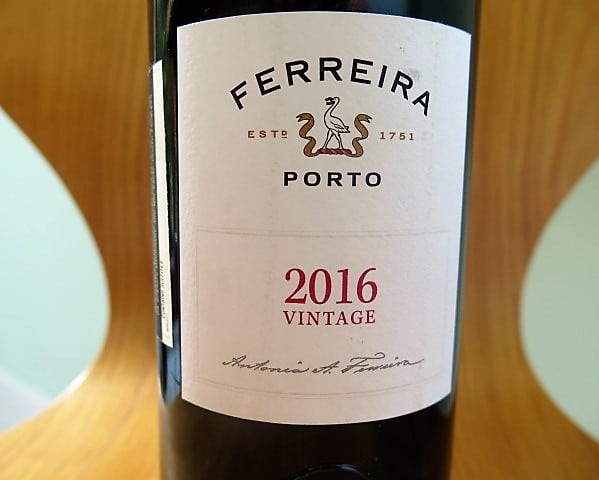 This is a spicy, elegant Vintage Port, true to both vintage and house, with a lovely concentration to its pure, tightly focused, fresh blackcurrant fruit.  Attractive green hints and lifted spice notes, florals on day two, bring animation and nuance.  Very persistent, with ripe but present supporting tannins which outpace the fruit a tad on the finish, verging on velcro.  But this port has the concentration to weather the tannins with time.  Very promising, it is a blend of 45% Touriga Franca, 40% Touriga Nacional, 10% Tinta Roriz, 5% Sousão sourced from Quinta do Caêdo and Quinta do Porto.  20% abv, Total Acidity 4.4 g/l, Residual Sugar 115 g/l, pH: 3.5 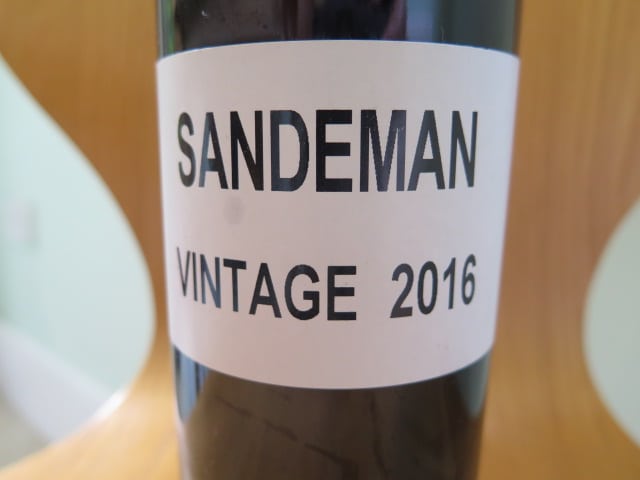 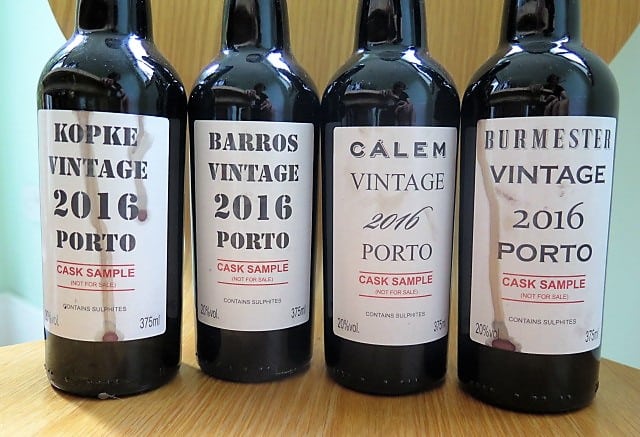 As you will know from earlier posts, I hold Sogevinus’ top notch wood-aged white and tawny ports in the highest regard.  I’ll write up Barros 102 Very Old Tawny shortly and you can find my most recent post about Kopke’s latest CNK 380 Very Old Tawny release and stunning 10 Year Old Tawny here.  It’s a shame the ruby ports don’t share their intensity, complexity or sublime balance.

I’m told that Sogevinus’ Vintage Port 2016 range is now been selling “en primeur” in the UK via the following importers (indicative prices): Hayward Bros Wines (Kopke – £67.50/bottle), Amathus Drinks (Cálem – £55/bottle) and Hallgarten & Novum Wines (Barros, £50/bottle). Burmester Vintage Port 2016 has an indicative price of £62.50, but is not currently distributed in the UK.

A spirity edge to the nose, but nice floral lift with some peppery rat-a tat animation to its liquorice and coriander seed edged black fruit.  A  youthful spirit, a touch callow as yet.  Pretty consistent over three days, with bitter chocolate and more emphatic liquorice to the finish on day three.  Not the richness or concentration of first division ports, but has interest and lift.

The Burmester has a richness, concentration and softness which I found lacking in its stablemates.  The palate is velvety, with integrated peppery notes (less rat-a-tat, more spicy) and, especially on days two and three, floral lift – violets and bergamot.  Bitter chocolate, liquorice, savoury roast beef and herbal (coriander seed) notes emerge with time in glass.  Finishes velvety and sweet.  Pleasant if lacking a bit of structural oomph and sophistication, it is my pick of the Sogevinus Ports.

A touch of banana to the nose, which has a hard grappa, spirity edge which follows through in the mouth.  True to the house style, this port has nice persistence to its juicy red berry, cherry and blackberry fruit.  A certain sappiness.  It’s just a shame about the grappa-like, hard spirit which make for a lean palate on day three.

This is a cask sample but, compared with its Sogevinus stablemates and other cask samples tasted, it seemed high-toned, raw and grapey on nose and palate, with pokey spirit.  Tasted over three days, it showed some attractive ripe black cherry and currant fruit and chocolate orange flavours, but vegetal/graphite, rather drying tannins made for a pinched finish.  One to revisit when finished.