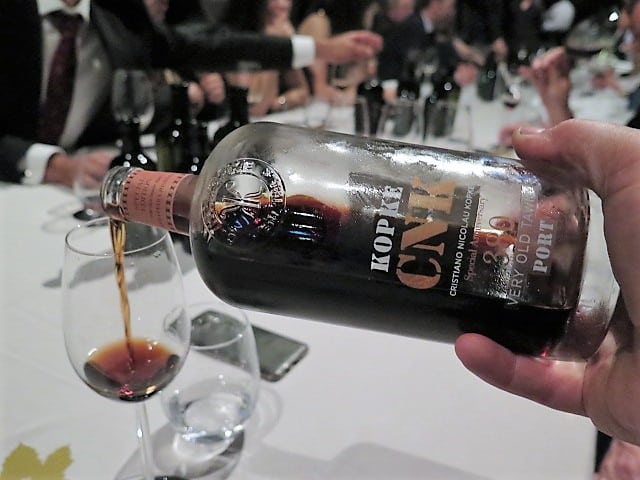 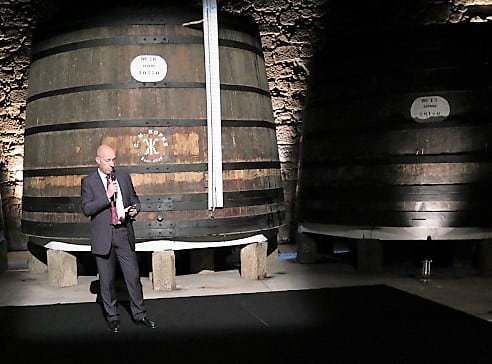 Parent company Sogevinus’ new CEO, Sergio Marly Caminal (pictured top), introduced the evening.  He joined Sogevinus in April having worked in beer and spirits for 22 years at Pernod Ricard.  Kopke and its sister brands Burmester and Calem are renowned for their wood-aged Ports, which rely on extensive ‘libraries’ of old stock, so Port is a whole new ball game for Caminal. 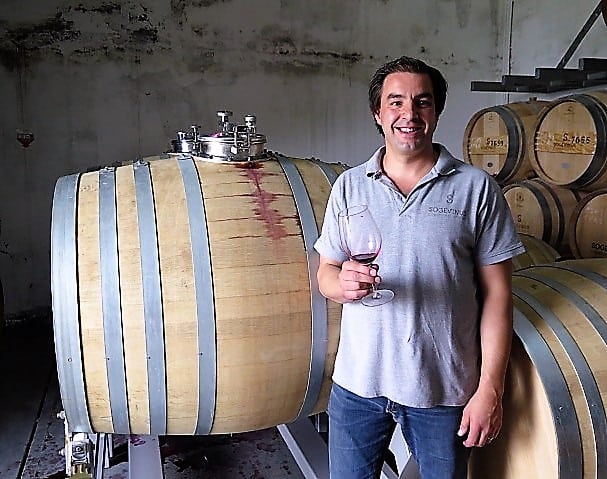 That said, it’s not all about Port.  Since an extensive tasting of Ports and Douro DOC wines in 2014 – my last Sogevinus trip – the latter have significantly improved.   When I visited Kopke’s Quinta São Luiz on the day of the dinner, Douro DOC winemaker Ricardo Macedo (pictured above) told us that the company is grafting over red grapes to white grapes at Sogevinus’ Baixo Corgo estate (better to match both terroir and demand) and plans very substantially to increase Douro DOC production (red and white). 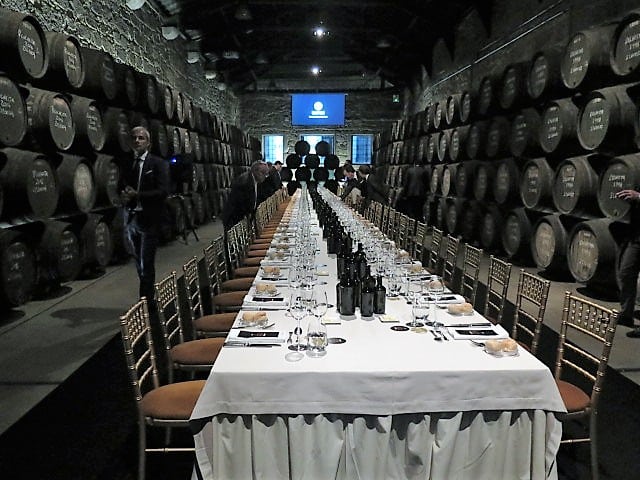 Dining at Kopke Lodge among the colheitas

Returning to the forte – wood-aged Ports – the blending material for Kopke CNK Very Old Tawny Port averages 95 years old.  Chief winemaker Carlos Alves explained that the blend spans the first three decades of the 20th century and includes the 1900 and 1937 Colheitas.  Most of the blend components had been ageing in 650l casks. The oldest – Colheita 1900 – was aged in a large 2500l oak tonel. In line with current Tawny Port trends, Kopke CNK Very Old Tawny Port is packaged in a clear bottle to show off its colour.  The bottle was specially produced in Marinha Grande, which is in the heart of Portugal’s glass industry.  It is packaged in a Portuguese walnut wooden box with leather trim.

A dark hue, a little ruddy, in the mahogany rather than tawny spectrum.  Initial impressions on the nose suggest dried plum – still fruit! – with rich, nutty frangipane, exotic, lifted dried coconut and edgier amaretto – a touch of “vinagrinho.”  In the mouth it has the intensity you would expect from the age of the blending components and this house, with sweetness and sourness to its sloe/sloe gin core and a complexing nutty, toffeed penumbra to the fruit.   Liquorice and cinnamon layers emerge, together with dried fig and burnt (caught) marmalade, making for a pithy, agrume finish – lovely balance and length – with the grapefruity acidity which I very much associate with this house’s older wines.  Powerful intensity; long and layered.  Just 380 bottles made.  RRP £1,350.00 We enjoyed this Port with cheese at the end of a picnic lunch at Quinta São Luiz.  It’s very good indeed.  Generous, creamy, very smooth with smoky roast hazelnut/praline, cafe creme, singed marmalade and dried plums.  Long, with delicious spicy woody, resonance.  A mellow end to the meal, it has lovely balance.  20% At time of writing, it is on sale at Mr Wheeler at £17.50/bottle, £22.95/bottle at Hennings