May’s New Douro Tasting provided an opportunity to taste a range of cask samples of Vintage Port 2015.  I wrote up the imposing Wine & Soul Pintas Vintage Port 2015 in my June Wines of the Month Post.  Below you’ll find my other 2015 Vintage Port highlights from that tasting in Oporto, with producer vintage reports and vinification notes where provided, including fighting talk from Niepoort, who reckon 2015 “will outlive the 1955, 1970 perhaps even the 1945 Ports.” Vintage report: 2015 was as perfect as it gets, particularly for Port – a year where we had time to think and make the right decisions, with the weather helping enormously.  Picked at the perfect time, 40% originating from our Pisca vineyard and 60% from different small parcels, all over 80 years old, the Ports were foot-trodden and made in lagares in Vale de Mendiz, with 100% of the stems. This resulted in incredible Ports with an unusual dimension, impressive structure with fine and intense tannins, great concentration but always accompanied by balance and harmony.  All the elements seem to have fallen into place to ensure that this Vintage will outlive the 1955, 1970 perhaps even the 1945 Ports (but after vastly different harvest conditions)…

The 2014/15 viticultural year experienced a cold and very dry winter, with rainfall at a record low compared to previous years. In addition, the spring and summer were dry and hot with three heat waves occurring in June/July, prior to a cooler month of August – the low humidity ensured that the incidence of disease was at an all-time low, and as a result, the vineyards delivered superb, clean fruit – an indicator of paramount importance for a great Vintage Port.

At Niepoort, in Vale de Mendiz, harvest started on 28 August under fine conditions. Even the rain on 15 and 16 September as well as the lower temperatures were most beneficial, allowing the grapes to reach full maturity without the problems of splitting and subsequent rot which could be expected in a year with normal levels of soil humidity.

The 2015 vintage perpetuates Niepoort’s tradition of creating balanced Ports which offer great concentration but also incredible elegant and finesse. What makes the 2015 vintage so unique is the purity of fruit – a result of low humidity during the growing season which was not affected by the rain on 15 and 16 September. It provided a diversity of parcels from which to blend the 2015 Vintage Port – some more acid-driven, from the early September harvest before the rain, and others slightly riper and harvested after mid-September.

Vinification: Sourced from 80-100 year old field blend vineyards planted to Touriga Nacional, Touriga Franca, Tinto Cão, Tinta Francisca, Tinta Amarela, Sousão, Tinta Roriz and others.  All the components for the 2015 Vintage Port were foot-trodden in circular granite lagares at Vale de Mendiz, the Port winery. The wine was vinified with 100% of the stems. Soon after harvest, the wines were racked, aged in tonéis, wooden vats, in the Douro over the winter, and then moved to Vila Nova de Gaia, in April 2016. The final blend then matured further in tonéis (for two years overall) at our lodges in Vila Nova de Gaia, prior to bottling.  Alcohol 19.5% vol, TA 4.43 g/l, pH 3.61, Residual sugar 101g/l

My tasting note: I was sorry to miss the London launch, not least since Dirk Niepoort showed the 2015 alongside older vintages, including the 1970 and 1952.  However, on each occasion that I’ve tasted cask samples of the ’15 at Simplesmente Vinho (February), Wines of Portugal Annual Tasting (April) and at the New Douro Preview Tasting (May), it has struck me as an exceptionally perfumed, fleshy, flamboyant, slinky Port. In a word, hedonistic.  Though I suspect Dirk would prefer elegant, which is certainly true given its tip to toe casablanca lily and bergamot florals and those slinky, graphite tannins which, after the initial waves of sweet, juicy, chocolate and gingerbread-laced raspberry, black cherry (close to the skin), berry and currant fruit, build inexorably in the mouth. While they (the tannins) make for a drier (flavour-wise) finish than one might have initially expected, they seem so hand in glove with the fruit that this Port comes across as deceptively smooth and approachable, with swan-like grace and tremendous fluidity.  Whether it will outlast the 1945 I cannot say, never having tasted it, but the tannins (and its equally well-integrated supple acidity) will paddle this lush but lucid Port well far into the distance.  Ever so lingering; perfectly lovely.  In some respects, the polar opposite of Pintas, with its imposing frame. £240/6 bottles en primeur at Tanners 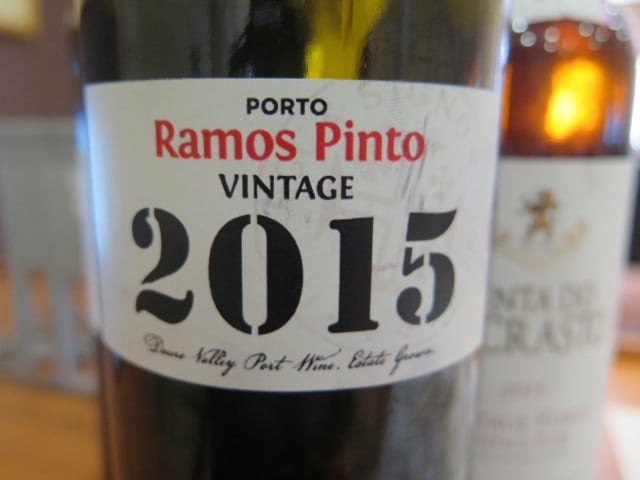 Vintage report:  In the Douro region 2014-2015 was a very dry wine-growing year with much less rain than the previous year. A cold dry winter was followed by an atypically warm spring, with peaks of hot weather in May and late June, which speeded up the vegetative rhythm. However, the existence of water reserves in the soil and the cool nights during the summer allowed the grapes to mature smoothly and progressively. The harvest of the grapes set aside for Port wine began in the Upper Douro at Quinta da Ervamoira on 27 August and ended on 30 September at Quinta do Bom Retiro, located in the Cima Corgo. The 2015 harvest was regular in terms of production, presenting elegant and balanced, very aromatic wines with a good volume in the mouth. They are remarkably structured and fresh.

Vinification: This blend of Touriga Nacional (55%, mostly from Quinta de Ervamoira, Douro Superior) Touriga Franca (37%, mostly from Bom Retiro, Cima Corgo) and Sousão (8%) was fermented in granite lagares where the grapes were trodden by foot and without de-stemming. Fermentation of this wine lasts between 4 and 5 days and produced an excellent extract.  Alcohol 19.54% vol, TA 4.84 g/l, pH 3.60, Residual sugar 94 g/l

My tasting note: João Nicolau d’Almeida was quick to pronounce 2015 a Vintage Port year when I visited Ramos Pinto for a vertical tasting celebrating 25 years of Duas Quinta Douro wine. I rather expected Ramos Pinto would be declaring back-to-back Vintage Ports in 2015 and 2016 but no.  Port winemaker Ana Rosas (pictured top) told me there were only 2 lagares in 2016, “so maybe they will improve the LBV in 2016” – surely one to watch out for!  Back to 2015 and Ramos Pinto’s Vintage Port is all iron first, velvet glove, with terrific structure to cradle its fleshy, bright, spicy and concentrated red and black fruits.  Embedded deep within the fruit, inky, locked down floral notes hint at more to come, while a powerful charge of ripe but present iron filing tannins lend minerality, grip and vigour.  Impressive, long and tight. 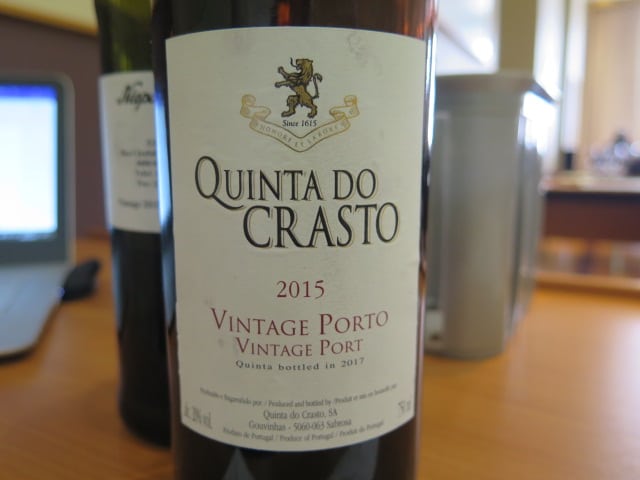 Vinification:  Sourced from 60+ year old field blend vineyards, the grapes were taken to the winery in plastic boxes and rigorously inspected on a sorting table at the winery. The grapes with their stems were then slightly crushed and transferred to a traditional stone tank (“lagar”) where they were foot trodden. After this, the grape spirit was added to stop the fermentation and fortify the wine.  It was aged for aout two years in large Portuguese oak vats and bottled without fining or filtration.  Alcohol 20% vol, TA 4g/l, pH 3.83, Residual sugar 105g/l

My tasting note: A very deep, inky hue with a pink rim, the nose initially very closed.  With time in glass pronounced orange peel and bergamot notes emerge on nose and citrussy palate.  Fleshy, slippery plum skins, plum and sweet raspberry in the mouth with mouth-coating, milk chocolatey tannins and a vigorous kick of fiery spirit to the finish.  Quite gutsy, with a mesh of firm tannins to ensnare its concentrated fruit.  Still falling into place and a little surly/brooding, but I like its energy.