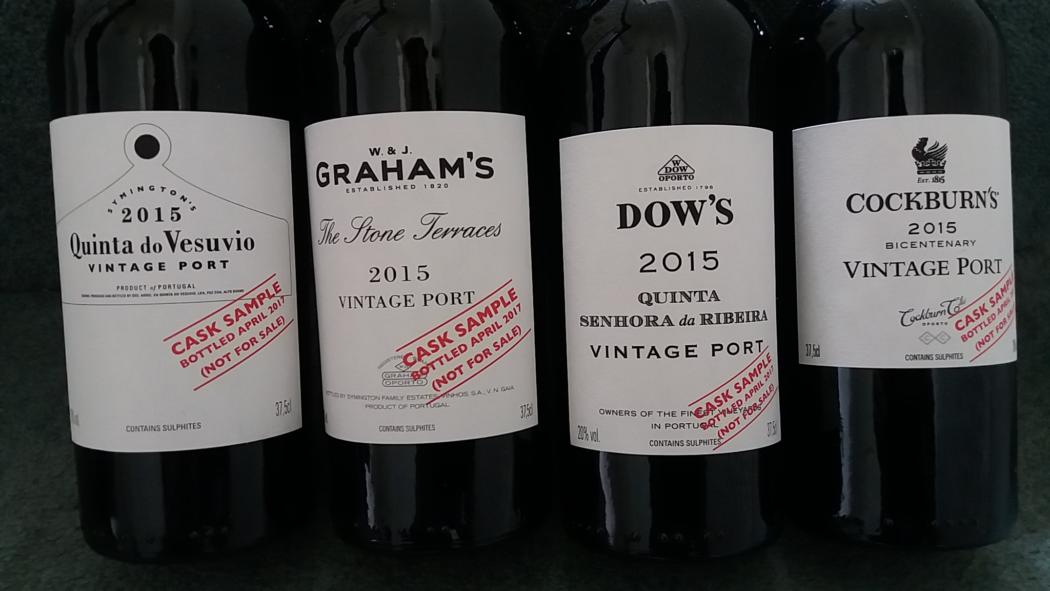 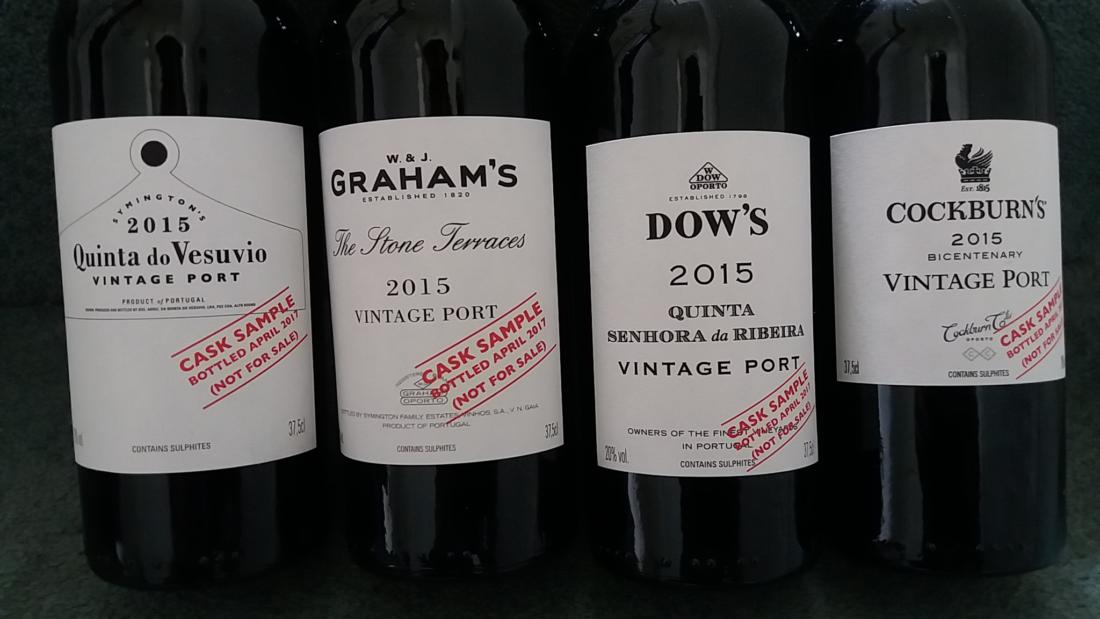 In my fourth write up of 2015 Vintage Port I review cask samples of Symington Family Estates’ releases from Dow’s, Quinta do Vesuvio, Cockburn’s and Graham’s.  I particularly enjoyed tasting the Cockburn’s Bicentenary Vintage Port 2015 alongside my notes of Cockburn’s Bicentenary Tasting.  With vintages ranging from 1863 to 2014, it was one of the most thrilling tastings of my life and descriptors from my picks of that tasting came tumbling back to me as I tasted the 2015.  On the basis of this latest release, I reckon the Symingtons can pat each other on the back for reviving Cockburn’s form and, as Dominic Symington put it, the house’s “quirkiness.”

Below you’ll find my tasting notes, which are preceded by the Symington’s vintage report.  For previous 2015 Vintage Port reviews click on the following links:

Tanners Wines have an en primeur offer for all four Symington Ports.  Details here.  N.B. Tanners’ prices given below are offered ‘Lying Abroad’. This means that you pay for the wine itself when you place your order and the duty and shipping (currently £3.75 ex VAT per 75cl bottle for mainland UK delivery) and VAT at the prevailing rates on the whole at the time of shipment. They anticipate shipping the Ports in late 2017 or early 2018. Vintage Report: Abundant late autumn rain in 2014 and crucial spring rain in the Douro Superior (unusually more than in the Alto Douro), produced exceptional conditions for ripening at this small 25-hectare vineyard.  Harvesting began on the 8th September at Senhora da Ribeira with the young vines but Charles Symington and his viticultural team were aware of the rain forecast for the 15th, which duly arrived and was then followed by fine weather. Picking of the finest Touriga Nacional, planted in the high east-facing Vinha Grande vineyard was started on the 23rd September and the Touriga Franca, from the lower, southerly facing Pedreira vineyard, took place from the 30th September. All were in exceptionally fine condition having benefited wonderfully from the recent rain.

The best Touriga Nacional and Touriga Franca were fermented in the estates lagares together with some Sousão, producing a Port of exceptionally intense, purple-black color with complexity fine tannins and balanced acidity.  Charles Symington commented: ‘The low 0.7 kg/vine yields of the Nacional and the fortuitous rain in the final stages of the maturation, produced perfectly ripe and concentrated grapes with balanced sugar levels. The Franca, however, was the variety that most impressed and in 2015 it was exceptional.’

My tasting note – the hallmarks of this vintage are its tip to toe spiciness and sturdy tannins.  Liquorice and anise, together with esteva and menthol notes bring lots of energy and back palate resonance to this Port.  Bitter chocolate-edged fresh fruits of the forest and, by day three, the svelter black cherry with floral and citrus lift which I more readily associate with this quinta indicate there’s plenty of fruit to be mined. Brooding.  £174/6 bottles en primeur at Tanners 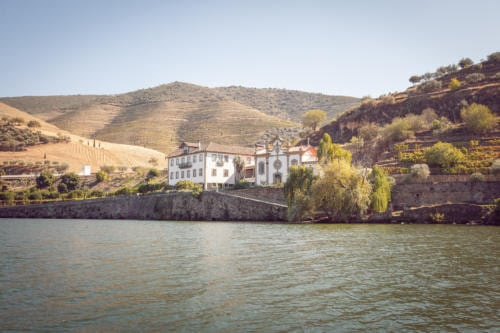 Vintage Report:– the 2015 growing season was simultaneously the hottest and driest for 36 years, but the Douro Superior where Vesuvio is situated, unusually benefited from more rain than the Alto Douro. Thus, Vesuvio was well placed to withstand the summer heat. By early September phenolic ripeness was not keeping pace with sugar readings, and picking started with the less mature vines.  Abundant rain fell on the 15th September, which was the turning point of the harvest and of immense benefit to the vines at Vesuvio. The finest Touriga Nacional was picked in perfect condition from the 21st, followed by Touriga Franca and other later-ripening varieties.  The fine weather continued into October, allowing the harvest to be completed under clear autumnal skies.

My tasting note – a really classic Vesuvio, bursting with glossy, luscious fruit and well supported by a raft of mineral tannins.  Long and layered with violet top notes and citrus/bergamot undertones, it has a tumult of black berry and currant fruit, with headier kirsch, liquorice and Green & Black’s ‘Ginger’ – a dark chocolate with a fiery, exotic note of crystallised ginger. Its fretwork of tannins, a touch chewy and peppery on the finish, embeds and sustains the flavours, making for a deliberative, well-focused palate despite the hedonistic fruit.  Terrific.  £210/6 bottles en primeur at Tanners 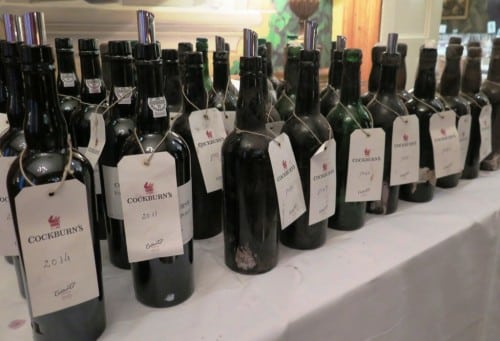 Cockburn’s Bicentenary Tasting; 2014 was not declared.

Vintage Report: this is the second Cockburn’s Vintage Port made by the Symington family since they acquired the  historic  name  in 2010, having bought the vineyards and cellars in 2006.*  The viticultural year in 2015 was dry with 31% less rain than average, but July and August were relatively cool. The temptation was to harvest early after a prolonged period with very little rainfall, but the grapes were not ready. Rain fell on 15th and 16th September and the best grapes at Quinta dos Canais and Quinta do Vale Coelho were picked from the 21st until 4th October; these were the 13 days when the finest Ports were made in the Douro Superior.   Yields are never high in the Douro and they were even less in 2015, with just 1.01 kg/vine at Canais and an average of exactly 1.00 kg/vine at Vale Coelho. The Cockburn’s 2015 is of exceptional quality and was entirely made in lagares at the small Senhora da Ribeira winery, located very close to both the Canais and Vale Coelho vineyards.

*During the bicentenary tasting, on which I reported extensively here, Charles Symington memorably commented that buying Cockburn’s in 2006 “was like buying a badly restored 1960’s Aston Martin and finding all the original parts in a garage.”  He highlighted four areas of improvement which have helped Cockburn’s to recapture its old form: vinification, viti/vini liaison (especially about harvest dates), brandy spirit and stock/barrel handling.  For Paul Symington, Cockburn’s Vintage Port is “about balance, not power and smooth tannins (bearing in mind all Cockburn’s Ports come from the Douro Superior).”

My tasting note: a deep hue and yet the fruit is distinctly red, with sweet, ripe strawberries to the nose and a hint of banana, which immediately took me back to the bicentenary tasting (I loved this sweet, supple, scented strawberry character in the 1969, 1934 and 1908 and Johnny Symington’s reference to banoffee pie for the 1863 resonated).  An arc of ripe, smooth, strawberry and earthy raspberry flavours build in the shapely mouth, pushing right through to the back palate – lovely purity and persistence.  Esteva, liquorice and jasmine notes dance around the milk chocolate-edged fruit.  The tannins, supple, have a savoury, mineral warm earth and subtly spicy quality.  For me, Paul’s description (“balance, not power and smooth tannins”) translates into the vinosity which  I so admired in my picks of the older Ports, now this wine.  With gorgeous fruit suppleness, saturation and freshness, this lucid Port delivered bags of charm over three days.   I was sorry to see it go!  £210/6 bottles en primeur at Tanners 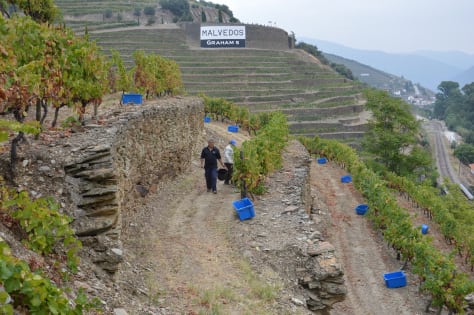 Vintage Report: the Stone Terraces vineyard at Malvedos comprises three adjacent parcels in a narrow curving valley; one faces north and is known as ‘Cardenhos’, whilst the other two, known as ‘Port Arthur’ face each other across the Síbio brook; one facing due east, the other due west. The fact that there is no south facing terraces proved to be of great benefit during the 2015 growing and maturation cycles, which were the driest and hottest of the last three decades.  Whilst most of the Malvedos vineyards, which have a predominantly southerly aspect, were subjected to challenging conditions, the Stone Terraces vineyards in their more sheltered positions were shielded from the excesses of the heat.

In 2015, the grapes were picked by hand over the weekend of the 12th/13th of September, a couple of days before substantial rain fell across the Douro Valley, and were subsequently fermented in lagares at Quinta dos Malvedos’ own small winery. Yields were incredibly low, at just 0.82 kg per vine, and several hours of treading over the following days delivered a magnificent wine with sublime violet aromas.

My tasting note: great opacity with violet-laced sweet red and black fruits of the forest – wild berry, currant and cherry – to expressive nose and palate.  Though, as you’d expect from Graham’s, it is sweet and generous, The Stone Terraces 2015 has an elegant push of acidity, which makes for a lingering, perfumed finish, with esteva, pronounced liquorice and a cool menthol note.   An abundance of ripe, chocolatey tannins supports the fruit through the mid-palate, then tapers into the finish, which has a reassuringly fine but firm, hard pan, mineral underlay.  It brings a touch of restraint to the sumptuous fruit and satisfyingly resonant warmth (a bit of oomph) on the finish.   £300/3 bottles en primeur at Tanners