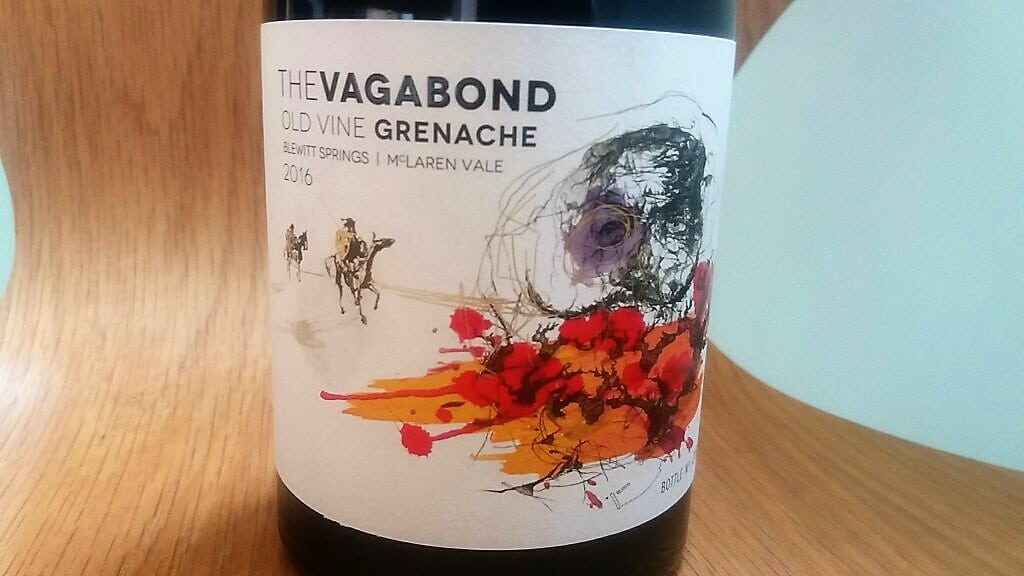 Since I tasted the first 2013 Thistledown Vagabond Grenache (reviewed here), it has evolved into a single vineyard Blewitt Springs Grenache (the 2013 was a blend of McLaren Vale’s Blewitt Springs & Seaview sub-regions).  In 2016, a new (much better, more individuated) label flags another shift.  This one revolves around winemaking technique, not fruit source.  Indeed, the Blewitt Springs site’s 70+ year old dry grown bush vines on deep sands with some ironstone has been the constant.  So it’s safe to conclude that technique, not terroir, makes for the striking difference in Vagbond 2016’s palate weight and prettier flavour profile.

“Pretty excited about what is to come,” co-founder Giles Cooke MW (of UK importer Alliance Wine) told me this year Thistledown have seven plots of Grenache, “ranging from an old vine block in the Riverland destined for our whole bunch, low intervention winemaking but for an accessible price point, through to some amazing 80 year old bush vine blocks in our beloved Blewitt Springs.”

I look forward to tasting the new range.  Here are my notes on Thistledown 2016 and 2015 Vagabond Grenache:

When Cooke contacted me about samples in mid-February, this vintage had just been bottled so had not yet been released. Ringing the changes he explained, “this year the majority of it was fermented in a layer cake style within a concrete egg. Natural ferment, 33% whole bunch with a layer of whole bunch placed in the egg then crushed on top then whole bunch, then crushed. It was then left to ferment naturally with no mechanical extraction whatsoever. Left on skins post ferment for 2 weeks, before draining off, pressing and back to the egg. No filtration or fining.”  Correspondingly, the 2016 Vagabond is a palish, translucent raspberry hue.  I much liked the complex campari floral/herbal/citrus lift to its sweet but, relative to the 2015 (reviewed below), pared back raspberry and juniper berry fruit.  To borrow from fellow Grenachanista/egg/[ceramic] pot head Yangarra Estate’s Peter Fraser, ‘walking a tightrope of acidity, not sugar,’ this tauter Grenache is somewhat skinnier than your average Grenache. It puts more focus on its wash of fresh acidity and those gently sandy tannins. I suspect this will narrow its appeal but, on the upside, introduce the genre to a new audience who will be entranced by its pretty profile.  Like me, they might be surprised that it weighs in at 14.5% alcohol (I’d have guessed 13% abv tops).  I suspect the 2016 will flesh out a little bit with time in bottle (I tasted it  on 31 March/1st April) but, as I said of new wave Australian Chardonnay several years ago, this pared back Grenache has cheekbones. 14.5% 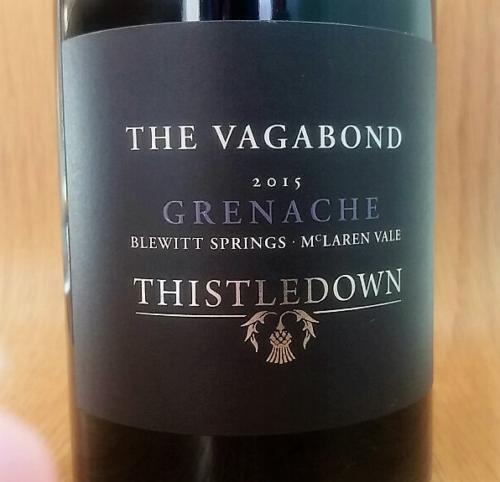 The fruit was cold soaked for 5 days prior to fermentation. Twice daily hand plunging during fermentation (20% whole bunch, the balance gently crushed to retain whole berries) was followed by gentle pressing before running to 500 litre French oak puncheons (20% new). The 2015 – a “savage selection” following 6 months in barrel – is a slightly deeper, less translucent hue than the 2016.  More crimson/plum.  Both nose and palate are sweeter and richer, with bright but creamy raspberry and strawberry fruit, with an incipient hint of barnyard (sweet hay) and a touch of confection.  For a 15% abv wine, it retains good freshness and flow – there’s no syrupy glycerol here. Subtly spicy sandpaper tannins provide gentle underpinning – a balance and structural ballast – to the finish.   It’s more crowd pleasing than the 2016.  Incidentally, its sweetness made it the perfect partner for a fiery (chilli) beetroot and sweet potato curry on day two.  15%