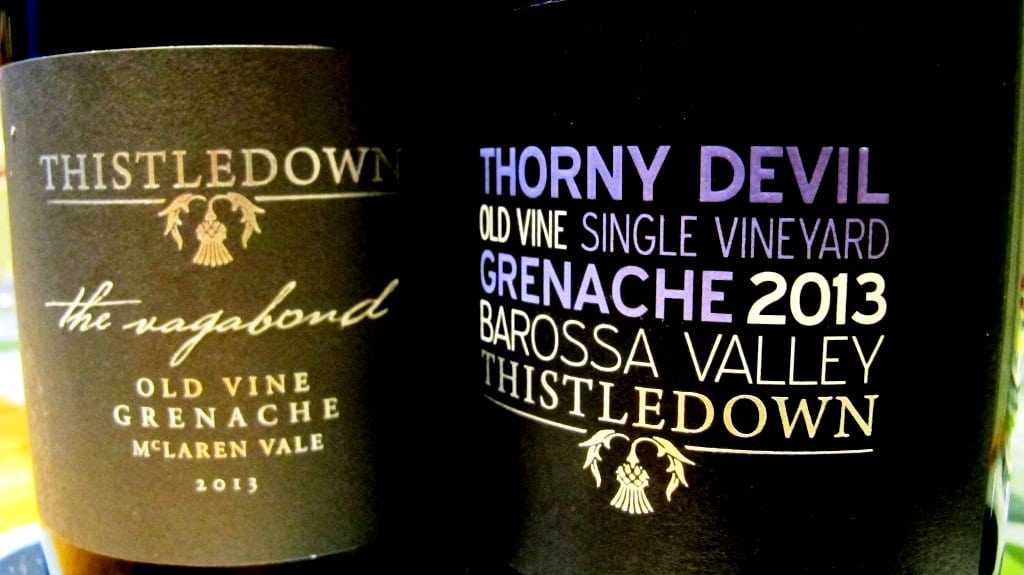 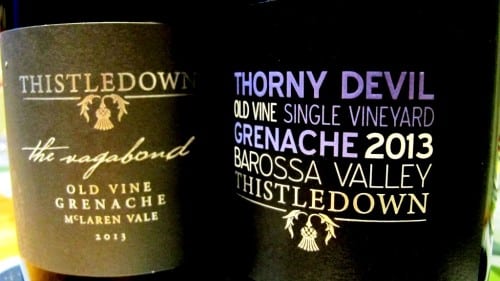 Following my great Grenache round up last October Giles Cooke MW dropped me a line to suggest I take a look at Thistledown Grenache.  Thistledown Wines is the creation of Cooke, fellow MW Fergal Tynan and talented South Australian winemaker Peter Leske, whom I first met a decade ago at Nepenthe.  The trio are, in their own words, developing a focus on individual terroir expressions of Grenache and Shiraz. I found their two expressions of Grenache much more exciting than the Shiraz. Though both share the variety’s characteristically high alcohol, it’s worn lightly thanks to a remarkable freshness and levity which allowed the detail/terroir of each Grenache to shine.

The Grenache is sourced from two old vineyards.  Most is from the Blewitt Springs sub-region from 70 year old, dry grown bush vines planted in deep sands with some ironstone. The balance is from 40 year old trellised vines in the Seaview sub-region grown on sandy brown loams which saw 15% whole bunch ferment, a technique which brings a Pinot Noir-esque note to both proceedings and wine. Bright, translucent cherry red with a floral, spicy nose and palate.  Its crunchy sour red cherry/plum and earthier wild raspberry fruit is laced with sweet, lingering cinnamon and cedar spice, violets and almond-edged kirsch.  With lovely animation and freshness from tip to toe there’s no glycerol drag (which one might have expected with 15%, but the alcohol is lightly worn).  A very good example of a medium-bodied  Grenache with fine detail. £17.99

This single vineyard Grenache (which was made with lots of whole berry fruit and a cold soak to maintain fruitiness) comes from old, dry grown vines in Lyndoch, the Barossa, on sandy loam. As you might expect, grown in a more continental climate, this deep ruby red has bigger bones.  Relatively ample red cherry and berry fruit flesh them out, as does gently creamy vanilla oak.  If that was all, it would be well made but not especially interesting.  Layers of savoury, spicy (liquorice), medicinal (coltsfoot), hardpan earth, a touch of frangipane even, rescue it from this fate, as does a firm finish with attractive freshness.  Very good.  Broader than The Vagabond, but with the lift and finesse to work brilliantly well with Yottam Ottolenghi’s Freekah Pilaf, bringing out the sweeter spices (cinnamon, all-spice) in both dish and wine.   15%   £15.95 at The Fine Wine Company.