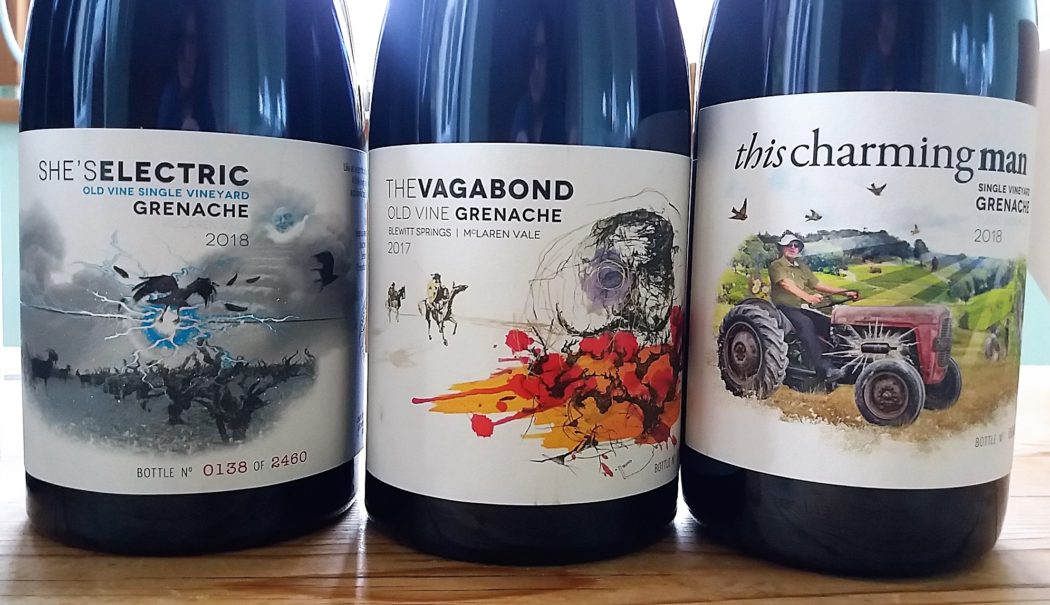 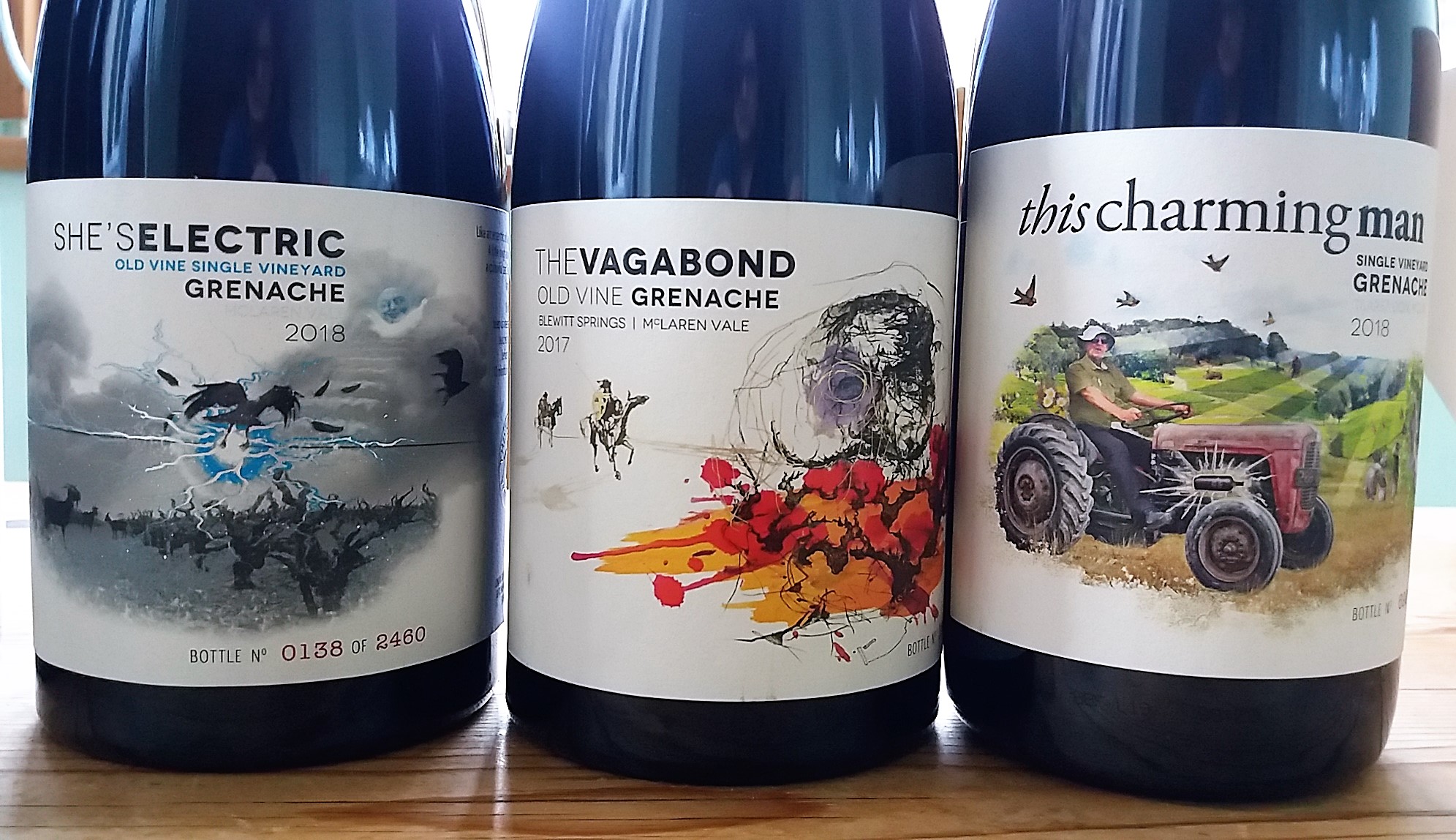 Since the first 2013 Barossa and McLaren Vale vintages burst onto the scene (reviewed here), I have really enjoyed following the progress of Thistledown’s burgeoning, boundary-pushing Grenache portfolio.  Co-founder Giles Cooke MW’s passion for the variety has been palpable and nowhere has the producer pursued it more hotly than in McLaren Vale.

Made in such minuscule quantities (less than 1,800l) that it wasn’t eligible for a trophy at McLaren Vale Wine Show, Thistledown Wines Sands of Time Grenache 2018 and the McLaren Vale Wine Show triple trophy bagger, Thistledown Vagabond Blewitt Springs Old Vine Grenache 2018, haven’t yet made it to these shores. Since neither was in my panel’s line up at the show, I have no notes on them.  Soon to be rectified with samples en route! Meantime, here are my notes on the latest UK releases (and click here for links to my earlier reviews).

This JHGC Silver-medallist is a ruby, translucent hue with  Fernet-Branca, pomegranate and red cherry to the nose, which notes follow through on a bright, firm palate (tightly held like a pomegranate caught up in the pith), a touch medicinal and savoury, though the fruit is vivid.   Lots going on here, with subtle hints of eucalyptus and tinder and bitter coffee grounds as it opens up – vintage freshness and detail.  The fruit was gently crushed to retain as many whole berries as possible before a cold soak prior to fermentation. Fermentation began naturally and hand plunging twice a day was carried out through to dryness. Gently pressed off skins before 10 months in old oak hogsheads.  14%

Just 2460 bottles of this JHGC silver medallist were produced. It is a deep crimson hue, with intense red and black fruits, less edgy than the 2017 and 2016 (reviewed here), doubtless reflecting the year – dry, with virtually no rainfall between January and April, resulting in very good fruit quality. It reveals plum, black cherry and chamois tannins, a touch savoury, emollient but textured, becoming sandpapery – pickier – going through. With air, disclosing discreet red berry and cherry notes, which rise, together with raspberry and a hint of red liquorice.  The richer, rounder black cherry prevails.  Nice underlying freshness. Young, still unfurling! She’s Electric hails from a dry grown, old bush vine site in the Seaview sub-region, overlooking the Onkaparinga gorge, farmed using organic principles. The grapes were destemmed and barely crushed 50%, while leaving the rest as whole bunches. Gentle treading of the grapes resulted in a natural fermentation with twice daily gentle hand plunging of the must to aid extraction. Once pressed off, the wine underwent malolactic fermentation in barrel before an 8 month stay in older barrels before bottling without fining or filtration.14.5%

The Advanced Release label is for test-bed wines, which are made in tiny quantities – 400 bottles in this case.  Moritz Road Grenache is a paler ruby/crimson hue than She’s Electric.  Grown on Maslin sands, the nose reveals pronounced jammy raspberry and strawberry fruit, with dutch liquorice and cherry lips (confectionary but, with salty and medicinal notes, this is not sweet confectionary).  More refined in the mouth, immersive, very fine, salty tannins cleave gently to its soft and silky red berry and cherry fruits, gently keeping the ripe, sweet fruit on a leash, making for a convex, shapely Grenache, with violet lift and plentiful anise riffs through the finish. A raft of sandpapery tannins pulls through on the finish.  On day two, it is even spicier, (whole)bunchy and the tannins grittier.  Super-interesting and characterful, this Grenache was hand-picked and wild fermented using 20% whole bunches in an open fermenter. Hand plunged gently during active ferment. 15 days skin contact. Pressed to 300l French 2nd and 3rd use hogsheads. Matured for 8 months prior to individual barrel selection. Hand bottled unfined and unfiltered. 14.5%

I was introduced to a new tasting descriptor – candlewax – at the show (thank you Skye Salter) and this cuvée has that quality, with a subtle earthiness too.  Notes which are soon over-taken by red/Dutch liquorice, cherry lips, red cherry and berry fruit, with a hint of blueberry and vanilla (blueberry muffin) and pithy, jewel bright pomegranate and pink grapefruit.  Despite the riot of flavours, gently sheathed with fine, spicy tannins, it has a slow burn intensity and rolling peacock’s tail finish with star anise and a hint of sous bois. The 2017 growing season – very late – was informed by a very wet winter and cool, unpredictable and sporadically wet vintage conditions. The Vagabond comes from 70 year old, dry grown, bush vines in Blewitt Springs planted in deep sands with some ironstone. The fruit was hand picked. 50% was wild fermented in a concrete egg which had layers of whole bunch and crushed fruit. This ferment had no mechanical extraction. The balance was wild fermented in an open fermenter with 35% whole bunches, hand plunged twice daily. This portion was aged in puncheons while the egg fermented was pressed back to the egg for maturation.  The 2018 vintage of this wine picked up a gold medal at JHGC and three Grenache trophies at the McLaren Vale Show. 14.5%

This, the first release, picked up a Gold Medal at JHGC.  A deeper hue than the others, with purple notes.  This Charming Man reveals crushed oyster shell to the nose which, initially, is more evident than the fruit on the palate.   With slinky fruit and silky tannins, it slides off the palate, hence the mineral rather than fruit impression – the charm which, despite the fruit weight, delivers it lightly, with sleight of hand.  Working, to get beneath the surface, it reveals musky hints of dried rose/Turkish delight, with undertones of sandalwood and earth.  Lots yet to give.  Going back, it gives up flashes of green, graphite and cherrystone/almond – Mahleb.  On day two, the fruit – still very cherry – is fleshier.  I still pick up the intriguing oyster shell note.  A super-intriguing wine.  Incidentally, I also tasted a couple of vintages of S.C. Pannell’s Clarendon Grenache which similarly impressed.  Just 960 bottles of this beauty produced from a single block from Bernard Smart’s elevated hillside vineyard with centenarian bush vines. Hand picked on the 15th March, 20% of the grapes were whole bunch fermented on the base of a 2 ton open fermenter. Wild fermented and gently hand plunged twice a day during active fermentation. Pressed off to 300 litre hogsheads, of which 25% were new French. 14.5%

Sticking with Rhone varieties, in 2018, Thistledown produced 660 bottles of this very promising Roussanne.  There is a sense of richness, of vanillin oak/oak spice, to the nose and palate, but nothing is over-done here.  It reveals tangerine close to the peel, firm nectarine and subtle green (fennel seed?) riffs in the mouth.  Well integrated acidity and the oak impart structure and line.  Nicely done.  Very pleasurable.  The fruit was hand-picked on the 19th February, whole bunch pressed, settled in tank, racked and wild fermented in barrel. Aged in the same barrique for 8 months.  14%