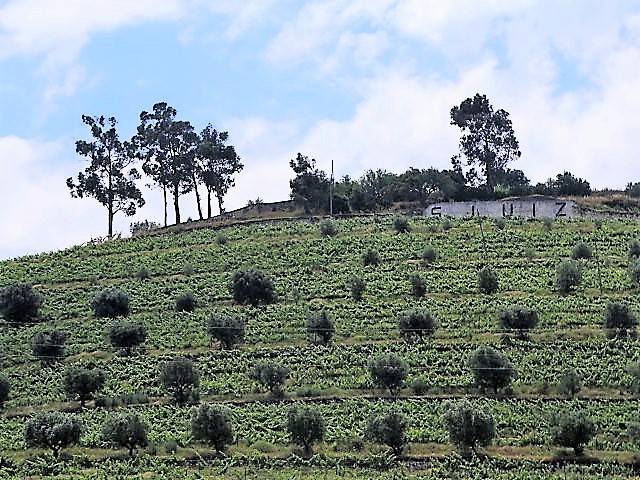 Kopke’s Quinta de São Luiz, on the left bank of the river Douro in the Cima Corgo

To my mind, both Port Houses’ strength lies in wood-aged Ports, especially Colheitas – top echelon stuff!  The Vintage Ports – I believe both single quinta – are not as concentrated or refined as the best in class from other classic Port Houses who produce single quinta vintage port in general declaration years, notably Quinta do Noval and Quinta do Vesuvio.

You’ll find my notes below, preceded by the producers’ notes about the vintage.  They are based on two tastings – first the Port Forum tasting in June, then samples tasted at home over a few days in September.  In each case, cask samples were shown.

The extraordinary weather conditions of the 2017 harvest, together with the excellent quality of Quinta do Arnozelo’s terroir, has resulted in a wine with the House’s unique character: Burmester 2017 Vintage Port.

“In the Douro, but especially in the Douro Superior, the vine-growing year of 2016/2017 was dry and hot, which resulted in one of the earliest harvests in the history of Quinta do Arnozelo. The heat waves and the lack of water produced small, excellent and highly concentrated grapes. Testing each vine’s grapes was crucial to decide the best picking time and the result is a fragrant, mature and intense wine”, says Carlos Alves, winemaker and Master Blender at Sogevinus Fine Wines.

At Quinta do Arnozelo, located in the sub-region of Douro Superior, the harvest started on 24th August and continued uninterrupted until 11th September (the same date the harvest had started in 2016). The grapes from lower altitudes (130-140 metres) performed better and half of this Burmester 2017 Vintage is made from Touriga Franca. The balance of the blend is a combination of Touriga Nacional (fresh and delicate) and 5% Tinta Roriz (which adds minerality).

A blend of Touriga Franca (50%), Touriga Nacional (45%) and Tinta Roriz (5%), sourced from Quinta do Arnozelo, which is located on the left bank of the Douro river, between S.João da Pesqueira and V.N. Foz Côa.  Closed, a bit of a brute, on nose and palate.  Opening up, it reveals spicy, black tea and vegetal notes to its round, plummy fruit and gravelly, stone-washed tannins.  A little austere (still coming together), which allows the spirit to poke through.  One to review.  20%, residual sugar 102 g/l, 9,660 bottles produced.

An unusual year which produced promising wines that now reveal their exceptional quality and future potential. “With rain levels 40% below average, the vine-growing cycle in 2017 was particularly challenging, and by July we already knew the harvest would happen considerably earlier than usual. A dry winter and particularly hot spring and summer seasons meant we had to take extra care when monitoring the growth of the grapes and adapt our work in the winery in order to follow the pace of the harvest without interruptions”, says Carlos Alves, winemaker and Master Blender at Sogevinus Fine Wines.

At Quinta de São Luiz, located on the left bank of the river Douro in the sub-region of Cima Corgo, the harvest began on 22nd August and continued non-stop until 19th September. This pace required careful follow-up and detailed planning of the harvest of each plot, making sure each was harvested at the grapes’ optimal maturation point.

The grapes selected to produce Kopke’s 2017 Vintage Port came from old vines grown in low and medium altitude plots, and from Touriga Nacional vines planted between 100 and 120 metres altitude.

A 50:50 blend of old field blend vines and younger, block-planted Touriga Nacional.  I like the freshness and blackcurant fruit profile of the Kopke.  Flashes of bay leaf spice, menthol notes (mint and eucalyptus on day two) and bergamot (doubtless the Touriga) lend interest and lift.  Firmly structured, just a little green and firm right now with edgy tannins.  Is it a little lacking in tannin ripeness and fruit or just needing time to unfurl?  Shows promise.  Like the freshness and lift – a house signature for sure.  20%, residual sugar: 99 g/l, 6,133 bottles produced.

Click here for my report on Niepoort Vintage Port 2017

Click here for my report on Ramos Pinto Vintage Port 2017

Click here for my report on Churchill’s Vintage Port 2017, with a report of a vertical tasting back to 1982