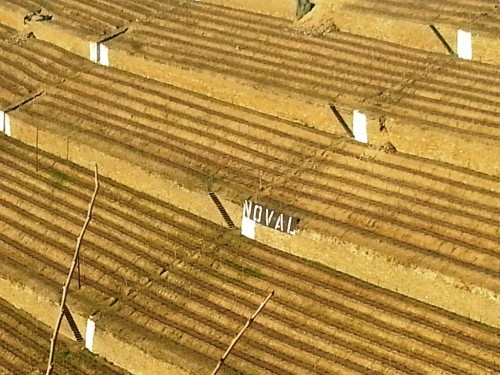 You will find my notes on both Quinta do Noval 2017 Vintage Ports below.  First, some commentary about the 2017 vintage from Noval’s press release and the London launch panel tasting, at which Managing Director Christian Seely discussed the year and the meaning of general declarations of Vintage Port.

Speaking at the London launch, Seely described the vintage as “extremely exciting” and “historic” – a reference to the back-to-back general declaration, which he described as “an unheard of thing.”  He took the opportunity to assert that (subject to final approval of each port by the IVDP), declarations of Vintage Port are “entirely the decision of the individual house concerned, without consultation” and made, he reinforced, because it is unthinkable not to.”

As for general declarations like 2017, which “join the ranks of our historic declarations,” Seely added these occur where “all the circumstances combine in the weather, the vineyard and in winery for us to be absolutely certain we have a great Vintage Port and are all happy to bottle.”   [Or, I should add, the majority are happy to bottle – 2016 is a case in point; neither Niepoort or Ramos Pinto declared 2016 and, for that matter, Sogrape have not declared classic blends (as opposed to single quinta) Vintage Port in 2017].

“ I am very happy to be able to announce the declaration of the Quinta do Noval Vintage Port 2017 and the Quinta do Noval Nacional Vintage Port 2017. I consider these wines to be among the best that I have known during my time at Quinta do Noval. The decision to declare them was a very easy one. As is well known, at Quinta do Noval, we do not hesitate to make small declarations of our Vintage Ports even in years which are not being generally declared, provided that the quality is excellent. But the 2017 is clearly an exceptional year which I believe will be remembered as one of the historic Vintage Port declarations of Quinta do Noval. The Quinta do Noval Nacional 2017 is I am sure a very great wine, and one for which the entire Noval team is very proud to have been responsible. I am both proud and happy to have been here when this wine was made. The growing season was dry and hot, both during spring and summer, with historically low rainfall and prolonged hot spells during the summer, particularly in June. Volumes were relatively low, and ripeness came early. Our harvest began in August and was finished before the end of September. The wines are characterised by an exuberant ripeness, with remarkable aromatic intensity, profound fruit and strong velvety tannins. These are great, very seductive Vintage Ports, hugely enjoyable to taste now, but clearly with immense ageing potential. Perhaps among the best we will ever see.”

Just picking up on Seely’s comment about aromatic intensity, for me both Noval’s and The Fladgate Partnership’s 2017 Vintage Ports in particular have a markedly savoury, pungent even, aromatic intensity (in a good way).  It’s not pretty florals like 2016 or 2007 (on its release), for example.  Rather, wilder – very charcaterful.

The ports were tasted at Quinta do Noval’s London release tasting on 23 May, at the New Douro Primeiro Prova tasting in the Douro in June (just the Noval, not Nacional) and on 25th June at a tasting organised by the Port Forum with the support of Vintage Wine & Port in Hampshire, who keenly champion smaller houses in addition to the big players.

Technical notes:  Quinta do Noval Vintage Port 2017 is a blend of Touriga Nacional, Touriga Franca, Tinto Cão, Sousão and Tinta Roriz.  The grapes were trodden by foot to obtain the must, then during fermentation macerated to obtain the best possible extraction in the lagares, the traditional stone vats from the Quinta.  The port was then matured for 18 months in wooden casks in the Douro in the quinta’s the air-conditioned cellars.  Alcohol: 19.5 % Residual sugar: 99 g/dm³ Total acidity: 4.92 g/dm³ Ph: 3.51

As befits a Vintage Port sourced from a single vineyard, Noval is always characterful, a little wild and spicy (par excellence in the case of Quinta do Noval Nacional).  It was particularly expressive on the nose at the June Port Forum tasting, with intense liquorice/anise, orange blossom and bergamot.  But across the three tastings, it was that spiciness and wild fruit spectrum, rather than the florals, that held sway.  It shows macerated cherries, juicy plum, slippery plum skins, Slivovitz even, which I guess is befitting for a fortified wine.  Raspberry too.  And yet it is elegant.  Drier in flavour profile than some of its peers (less fruit focused), with spicy, savoury, earthy/salty, schistous mineral layers (not just nuances), with liquorice, clove, stem ginger, esteva, bitter chocolate and cedar.  Spicy, peppery, mineral (fine but mouth-coating graphite) tannins, a little sinewy too, add warp and weft, building on the finish.  Long, wild yet vinous and elegant, with impressive penetration of flavour and back palate resonance.  Though wonderfully expressive, with a lightness of touch (nothing heavy or extracted), it is firm, with plenty of detail and depth.  I am sure it well age extremely well.  Singular. Dynamic. Terrific.

Technical notes: sourced exclusively from a uniquely ungrafted old field blend parcel, comprising Touriga Franca, Tinto Cão, Touriga Nacional, Sousão and Tinta Roriz, among others.  The grapes were trodden by foot to obtain the must, then during fermentation macerated to obtain the best possible extraction in the lagares, the traditional stone vats from the Quinta.  The port was then matured for 18 months in wooden barrels in the Douro in the quinta’s the air-conditioned cellars.  Alcohol: 19.5 % Residual sugar: 99 g/dm³ Total acidity: 4.68 g/dm³ Ph: 3.51

My tasting note: great depth of sweet, seemingly fleshy black fruits on the nose but, as ever, the Nacional ratchets up the spiciness and minerals to the next level.  The 2017 Quinta do Noval Nacional is pungent, with lashings of esteva, liquorice and perfumed cedar – as if tinder dry and aromatised.  The tannins are powerful, broader and more savoury – on the one hand approachable, on the other for the long haul, as the mouth-coating, mineral chiselled finish asserts.  Exceptional layering of flavours and aromas – seemingly in every nook and cranny of the port ‘n the palate – makes for a compelling, dynamic wine, long on flavour and structure.  Outstanding power, complexity and structure.  I love the contrast with my other pick of the vintage, Graham’s The Stone Terraces Vintage Port 2017, which is much more fruit-focused and pretty, rather than savoury of profile.  Quinta do Noval Nacional Vintage Port 2017 is, of course, produced in tiny quantities and this and its fine reputation are rightly reflected in the price. But let me tell you, Quinta do Noval Vintage Port 2017 will not disappoint.  It showcases the quinta’s personality – complexity, structure and layer –  beautifully and singularly.

Click here for my report on The Fladgate Partnership’s 2017 Vintage Ports.

Click here for previous reports on Quinta do Noval Vintage Ports including notes from an extensive Vintage Port and Colheita vertical tasting from last November.