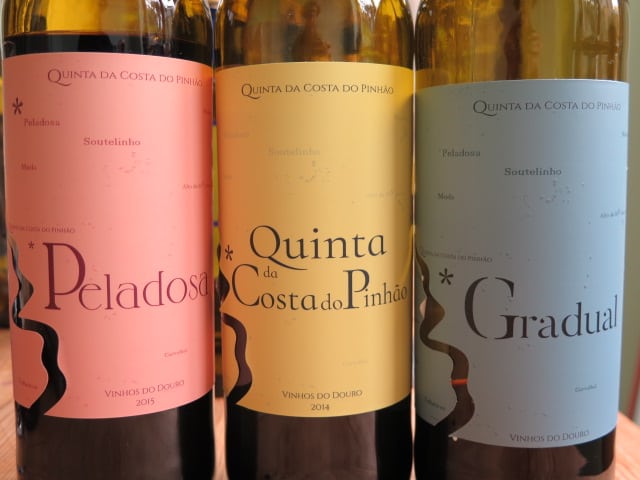 Little did I know that I had a Douro winemaker in my audience at last month’s new wave McLaren Vale Grenache seminar at Prowein.  Introducing himself to me afterwards, Miguel Morais of Quinta da Costa do Pinhão told me, “your presentation could have been about my wines, apart from the variety and us being in Douro!!! I’m looking for exactly the same profile of wines, with similar wine making techniques…elegant and delicate, but intense and complex…fresher and lower alcohol, green but not unripe. ”

He kindly sent me samples afterwards and the affinity of approach was striking.  As McLaren Vale’s Toby Bekkers puts it, the new wave approach revolves around “taking some of the density out and putting fragrance and spice and texture in.”   No small challenge in dry, warm regions like McLaren Vale and the Douro, whose shy-bearing old vine fruit can pack a punch!  Getting the balance right requires experience and skill in a style which is work in progress in the Douro.  The right site too.

Quinta da Costa do Pinhão’s 17 ha of Grade A vines rise from 200 to 450 meters, with south-east to south-western solar exposure.  Most vines are over 35 years old, the oldest 80-90 years old.  Morais told me that the property, which has been in his family for over 6 generations, has “always produced Port wines for the most influential Port Wine Houses, frequently becoming part of their Vintage wines.”

When he inherited the estate in 2006, he continued to sell grapes to Port producers whilst learning “how to take care of the vines, the grapes.”  With no artificial chemicals, Morais is “building up to certified organic farming.”   He still sells the beneficio (about 75% of the grapes) to Sogrape for Port and some old vines to Niepoort.  The shift towards making Douro wines came in 2014 – the first vintage – when the old winery was rebuilt and equipped to produce 40,000 bottles (which would account for half the estate’s grapes).   In future, he plans to make Port, “but prefer to take steady steps,” he says.

Morais invited Luis Seabra – a skilful pair of hands – to help make the wines.  Seabra is himself making new wave, lighter Douro reds under his eponymous label (my report of a recent visit & vertical tasting here) and at Pormenor, where he also consults.  All fermentations are natural and minimal sulphur is added. The winery is built at different levels in order to minimise the use of pumps.

The 2015 white was crisp, very dry; fermenting it in open concrete vats has given it too much exposure to oxygen for my liking.  However, I found much to like in the freshness and minerality of Quinta da Costa do Pinhão’s reds.   Unusually, because it comes from the oldest (80-90 year old) vines, I felt Peladosa struggled to find its balance, especially in the lighter 2014 vintage.

Here are my notes on the reds: 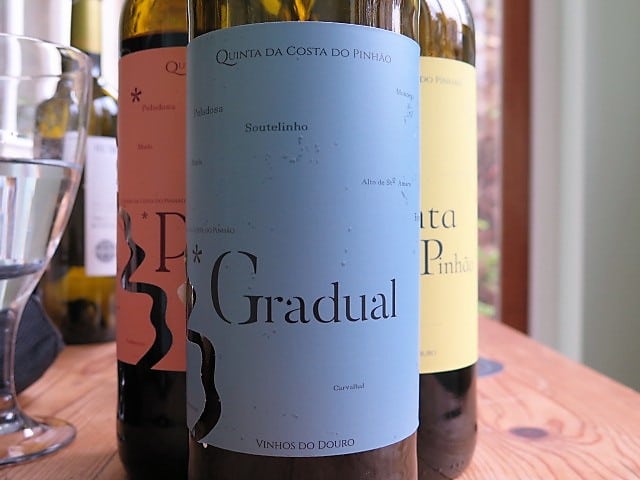 Quinta da Costa do Pinhão Gradual – cool as the label

The grapes come from 35-45 year old block planted vineyards at 300-450m, planted with equal proportions of Touriga Nacional, Touriga Franca and Tinta Roriz.  Harvested on September 12th & 13th, they were fermented in a combination of traditional schist lagares with gentle foot treading (40% whole bunch) and stainless-steel tanks (30 % whole bunch).  The wine aged for 12 months in French oak barrels.  With a hint of capsicum/graphite and lively crushed coriander seed to nose and blackcurranty palate, this cedary, spicy wine’s cool elegance put me in mind of Cabernet Franc.  Well-defined, very juicy, with mineral-sluiced, salt-licked fruit, it has flesh (juicy plum) on its bones, but not an ounce of fat.  I liked its pingy persistence and precision going through.  Nice linearity and balance, the tannins fine but textural.  The most consensual of the reds.   12.5% 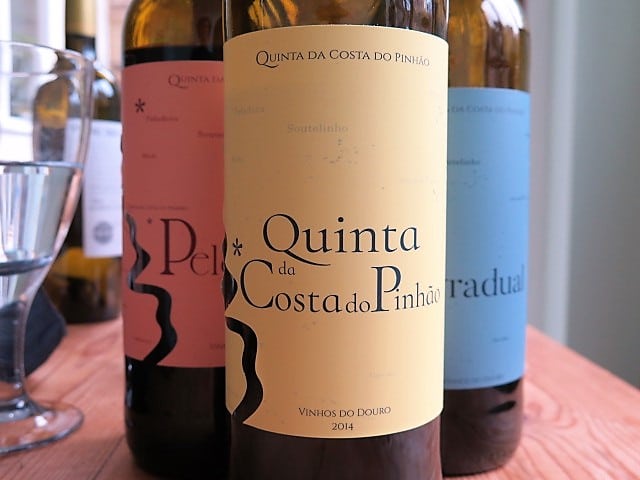 Quinta da Costa do Pinhão Tinto – my pick of the range

On paper, the raw ingredients and process (save for time in oak) look the same as Gradual, but the profile is quite different.  The grapes come from 35-45 year old block planted vineyards at 300-450m, planted with equal proportions of Touriga Nacional, Touriga Franca and Tinta Roriz.  Harvested on September 12th, they were fermented in a combination of traditional schist lagares with gentle foot treading (40% whole bunch) and stainless-steel tanks (30 % whole bunch).  The wine aged for 18 months in French oak barrels.   This wine has a wilder, more terroir-sluiced character than Gradual, with earth (incipient mushroom), graphite, violets, juicy blackberry and sour cherry/plum (almost an agrume citrus note).  Gently al dente, spicy, cedar-flecked tannins have a presence and texture without inhibiting the flow.  Together with this wine’s persistent, fresh, mineral, salty, subtly sour acidity, it brings lovely energy to the palate.  A dynamism.  On song with the intensity of the fruit, the lightness of touch works very well.  My pick of the line up.  12.5% 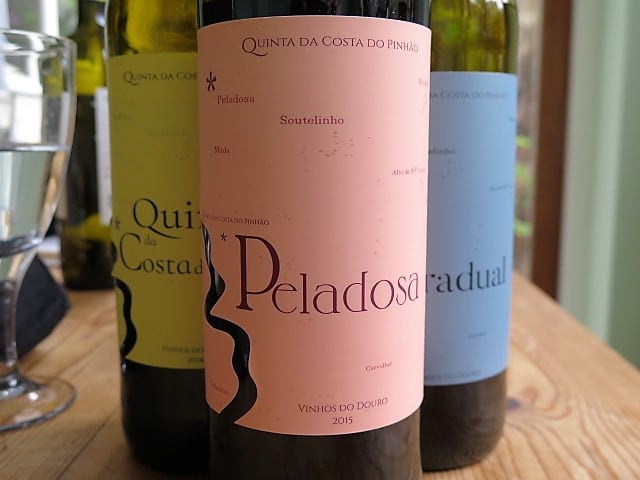 The top cuvée comes from an 80-90 year old field blend vineyard at 300-350m on schist.  It has over 20 different varieties, but the principal ones are Tinta Roriz, Tinta da Carvalha, Tinto da Barca and Alicante Bouschet.  Peladosa was fermented in open top cement tanks, then aged in 500l French oak barrels for 21 months (I don’t have the technical fiche for this wine, but I’m sure it will have been fermented with a proportion of whole bunches).  On day one, the 2015 initially seemed quite still and self-contained, lacking a a little layer and drive.  I could sense the vineyard’s Port-history – a darker intensity – despite its lighter structure (a rasp of sandpapery tannins), fresh, mineral acidity and underlying bright red fruit.  Qualities which appealed, but somehow didn’t quite land.  As it opened up in the glass and on day two, the quality of the vintage asserted itself, revealing perfumed violet notes to its fresh, lightly worn but intense red, black & blue fruits.  Pronounced mineral acidity and gently pithy, sand-papery tannins made for a persistent finish.  If you expect a top cuvée to deliver more body, this wine is not for you.   The old vines deliver intensity and complexity for sure, but this wine is very much for those who enjoy lighter, more acidic reds; the 2015 gives you a little more fruit intensity/sweetness to balance the acidity than the 2014.  Decant to let it unwind.  13%

In a lighter (higher precipitation year), Peladosa 2014 (60% whole bunch) spent 18 months in 500l French oak barrels.  Softer than the 2015, more emphatically mineral/earthy and red-fruited with spicy, lacy, very slightly gritty tannins, the 2014 is initially quite delicate.  It reveals hints of kirsch, mulberry and chinato as it opens up, even some creamy, chocolatey oak on day 2.  Though I like aspects of this wine – its freshness and minerality – this wine didn’t quite gel for me. I find it difficult to articulate why, but I guess it comes down to balance – the fit of the frame to the fruit.  12.5%