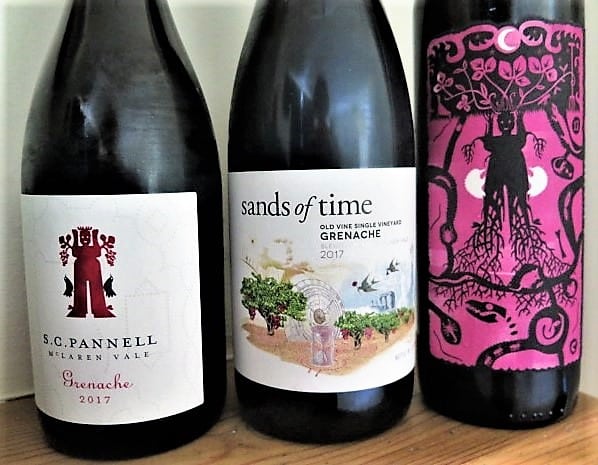 Friday, 21st September is International Grenache Day, so why not raise a toast to this variety’s exciting turn around in Australia?  Here are three great examples of McLaren Vale Grenache which I’ve tasted this month.   Two make their debut, while Old MacDonald – my introduction to new wave Australian Grenache – is, says Steve Pannell, “quite possibly the best Grenache I have ever made.” By golly, it’s good!

Pannell takes the credit for opening my eyes to the exciting potential of Australian Grenache back in 2010.  His maiden 2004 McLaren Vale Grenache was made in a strikingly aromatic, medium-bodied style likened by him to ‘warm climate Pinot Noir.’

The latest addition to his range is labelled Garnacha (the Spanish name for Grenache), which signposts a smashable, zesty, lighter-bodied style, with intensity and plenty of interest.  It’s not the only zeitgeist box this early-release, low-sulphur (25 ppm) and unfiltered Grenache ticks.

The excitement around contemporary Australian, especially McLaren Vale Grenache, has sparked a wave of new producers making a host of styles, whether terroir and/or winemaking-driven.  Take Aphelion, a favourite, whose winemaker Rob Mack recently bagged Australia’s coveted Young Gun of Wine award.  And, Thistledown, whose wines I’ve been following for a few years now (earlier Thistledown Grenache reviews here).  Co-founder Giles Cooke MW is plainly having the time of his life exploring the variety.

Both Mack and Cooke buy in fruit and, Cooke told me, “most rewarding has been slowly building trust with growers of the best fruit. That we can even access some of this fruit at all is amazing but now that we are making a name for ourselves, consistently purchasing (and paying) for fruit and supporting growers of Grenache by getting the message out there, we now have growers coming to us. It is also hugely rewarding to see that some of the best growers, people like Bernard Smart, are receiving the recognition they deserve in their lifetimes. A few weeks ago I was able to visit Bernard’s son Wayne to tell him that I was raising the price I was paying him and that we were introducing a new single vineyard wine with his Dad’s image on it – that meant a lot to both of us.”  Make a note of that one for 2018!

You’ll find my notes on these distinctively different McLaren Vale Grenache wines below.  All three hail from the cool 2017 vintage, which plays so well into the style of new wave Australian Grenache.  Here’s Pannell’s take on the year:  “[T]he 2017 vintage was very cool and mild, which was ideal for the vines. Good winter and spring rains were followed by a very mild, long summer. The results are wines with ample fruit complexity and great natural acidity.”

By the way, David William’s Observer column on Sunday reported that a Riverland old vine Grenache in which Cooke has a hand is on a 30% off deal at Marks & Spencer until 3 September, down from £10 to £6.67/bottle. You can find my January review of Gorgeous Old Vine Small Batch Grenache 2017 here. I said it was smart buy then at a tenner, so do check it out! 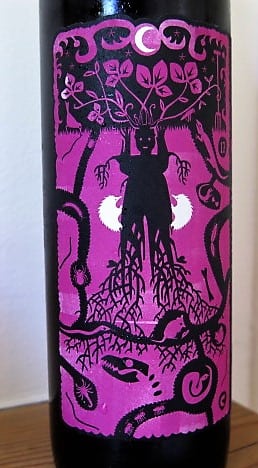 Pale crimson, initially a touch reduced on the nose and raspberry-fruited palate, but it soon unwinds, unleashing sweet raspberry cream soda, pronounced Turkish delight, parma violets and bergamot jelly bean lift (classy confectionary), with some zesty orange peel, chinato herbs and lively peppery notes in the background.  Though very much at the lighter end of the medium-bodied spectrum, with a natural sweetness, it has interest, texture and rub – a lick of tannin and spice.  Delicious, sappy, mouth-watering acidity makes for a persistent palate.  Pannell’s tasting note mentions water-melon – yes!  I find blood orange and white pepper-laced ruby grapefruit too.  This vivid, exotic take on McLaren Vale Grenache, ahem Garnacha, was sourced from a dry-grown vineyard pruned to single-bud spurs. The name Basso stems from the low intervention winemaking.  Following minimal pressing, the juice was fermented (including malolactic fermentation) in stainless steel vats, then aged for six months in French oak (seasoned, I’m sure).  It was racked and bottled without filtration.  Liberty Wines, RRP £18.99 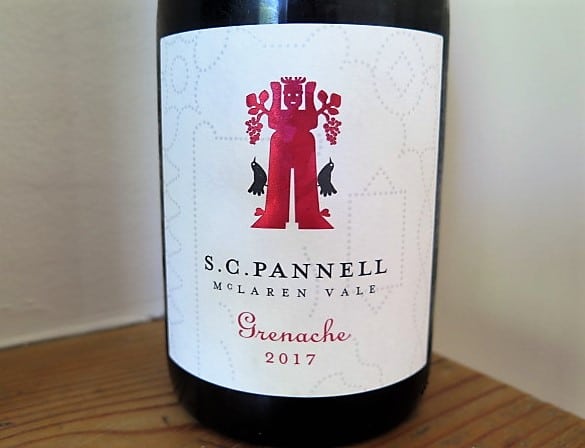 I thought it would be tough to outdo the 2012 vintage of Pannell’s top McLaren Vale Grenache, a personal favourite.  The 2017 is mesmerisingly spicier, more savoury, with a unique Australian thumbprint of dusty peppertree – dry twigs and leaves (snap and crackle), which I enjoyed enormously about it.  It’s more Eau de Cologne or aftershave than ‘perfume,’ with Imperial Leather cedar, clove and sandalwood, Mourvedre-like saddle soap/leather and orange peel and vermouth-like herb nuances to its creamy, sweet, yet restrained – very much on the backfoot – red berry and cherry fruit.  Pithy, striated tannins – quite the filigree fretwork – are present but dynamic.  Lingers long and lifted, with peppery grunt, tinder box tension and a persistent undertow of mineral-sluiced acidity.  A triumph!  The grapes were hand harvested early, on 4th March and come from Old MacDonald vineyard’s 75 year old vines in Blewitt Springs. They were fermented in small open-top fermenters with 20% whole bunch. The wine spent 11 days on skins before gentle pressing. It was transferred to a 4,500 litre, eight-year-old French-oak vat for maturation before being bottled without filtration nine months later.  14.5% Liberty Wines, RRP £39.99. 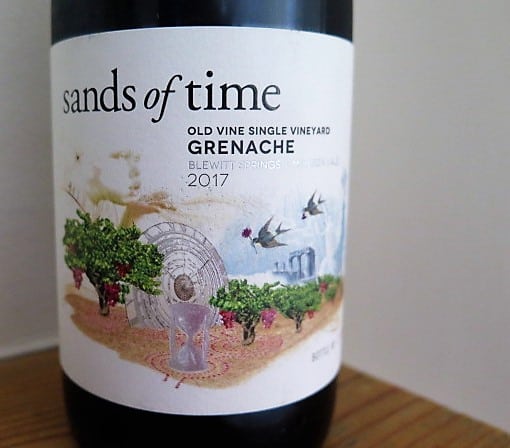 The fruit for this McLaren Vale Grenache is exclusively sourced from Sue Trott’s 80 year old dry grown vineyard on a ridge of fine Maslin sands.  Located in Blewitt Springs, an elevated sub-region (check out this video of the vineyard), it benefits from cooling Gulf of St Vincent breezes.  I found it quite different from other more aromatic, expressive Blewitt Springs wines I’ve tasted, even Thistledown Vagabond 2016, which came from the same vineyard.  If you like, more introspective – at least at this point in time.   It has a deep set, red cherry and plum nose and palate with ‘skinsy’ (inside of a cherry skin) tannins, a touch salty.  Finely textured and close weave – chamois-like on days two and three – these fruit-driven tannins have a coolness and succulence about them going through, setting them apart from the spicy imprint of oak tannins and mineral rub of sandpapery tannins on the finish.    Tightly held, the fruit cleaves to the palate. On days two and three, it revealed a little more of itself, with crème de mure, pithier pomegranate, medicinal cherry lips, five spice, orange peel and bergamot nuances.  Well structured, with evident power in hand, this cool customer is a sleeper.   I reckon, it will be worth the wait. Thistledown Sands of Time Grenache was naturally fermented in a combination of 50:50 concrete eggs and two ton plastic open fermenters.  With alternate layers of (30%) whole bunch and gently crushed fruit, the egg component is left to ferment with no extraction whatsoever.  “[T]he most intervention it gets is me gently raking the cap to keep it wet,” said Cooke, who rates egg ferments for the “rapier like precision and purity” it imparts to wines.    The open ferments are gently plunged twice a day.  This Grenache was then aged mostly in concrete (two thirds) and new 500l French oak puncheons for 10 months and bottled unfined and unfiltered.   14.5%  It is priced at $70 in Australia – a touch higher than S C Pannell Old MacDonald.