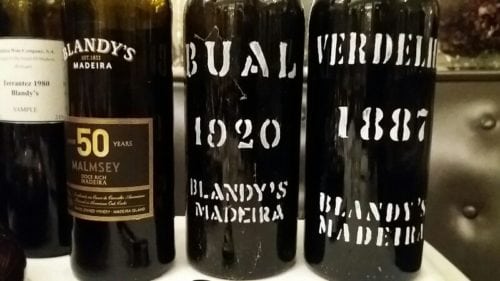 Portuguese Atlantic islands did much to garner my attention in October.  I re-visited the Azores for a Decanter feature (due out February) and caught up with Blandy’s latest vintage Madeira releases at a dinner hosted by Chris Blandy.  It was a nice opportunity to find out what this energetic CEO has been up to, including on the Madeirense (Madeira table wine) front.  As ever, it’s full steam ahead at Blandy’s.

Hot air of a different sort was most unwelcome this summer – one of the hottest on record.  Three people were killed as firefighters battled to contain wildfires (and exploding gas tanks) in Funchal, the island’s capital.  Faced with the prospect of losing 650, 000 litres of fine wine (including Blandy’s oldest), together with the shipper’s archives and treasured paintings, Blandy cycled into the city, ducking the road blocks and evacuees fleeing the other way hell-bent on protecting it.   Reckless one might say, but the seventh generation family member told us he was haunted by the vision of being “the first Blandy in 200 years to mess it up.” 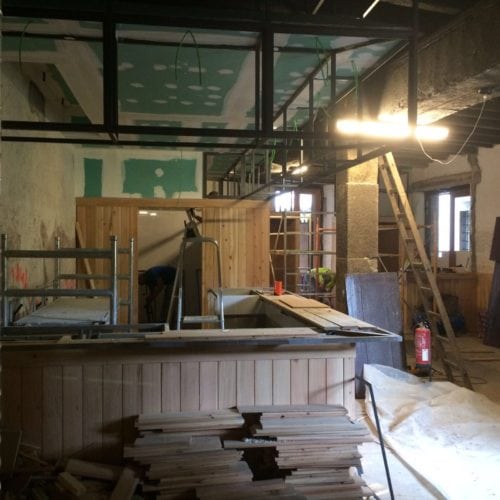 Which is why, on 8 August, instead of launching his dream  1811 Wine Bar & Bistro, which Blandy had so excitedly told me about just a couple of weeks earlier, the CEO and his team were at the ready with hoses to fend off the flames from Blandy’s iconic Wine Lodge in the centre of Funchal. 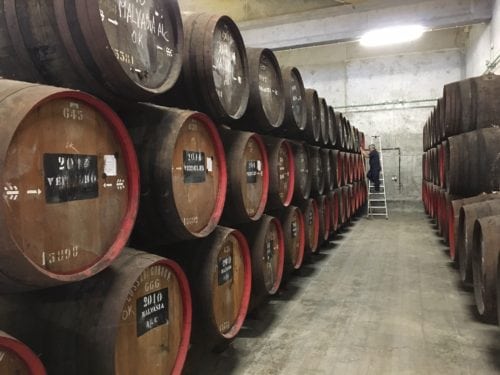 No doubt Blandy was relieved that, since 2014, all other operations have been re-located from Funcal to Caniçal on the east of the island.  At the beginning of this year, the vinification line and over 1.5 million litres of premium Madeira ageing in American oak barrels and Brazilian satinwood vats (pictured above) was moved. 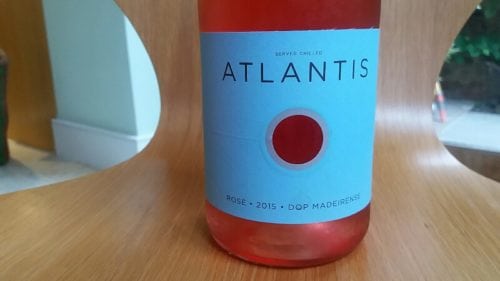 At the same time, Blandy’s invested in new vinification tanks to allow them to develop the table wine project which I reported on earlier this year (check out this post on Atlantis Rosé).  Blandy told me it “exceeding our expectations in terms of quality.”  The company produced 40,000 bottles of rose and just over 5,000 bottles of white (100% verdelho) from the 2015 harvest.  In 2016, it’s full steam ahead.

Meantime, back in Funchal at Blandy’s Wine Lodge, aside from the 1811 Wine Bar & Bistro, Blandy’s has invested in renovating the museum, improving the tasting room and developing new event spaces.

As the eagle-eyed among you will have spotted, the tasting revealed another development – Blandy’s Malvasia 50 Year Old Madeira. Below you will find my notes on this wine, the latest vintage releases from Blandy and a rather special, perfectly stunning finale.

Aged for 14 years in seasoned American oak casks in Funchal.  As it opens up this Sercial hits all the right notes with its pretty mirin and geranium nose.  The attack is smoky, energetic and firm  with serrated acidity which lends no little velocity or dimension to this Madeira’s barley sugar-edged grapefruit peel/pith.  The finish is pithily dry and super smoky with contrasting pretty mirin and pungent iodine/kelp notes.  Great typicity and focus.

Aged for 15 years in seasoned American oak casks in Funchal; a release of 3000 individually numbered bottles.  Great pungency and tang of tropical green fruit – guava, green mango – to nose and palate.  In the mouth, the Verdelho – classically fruity, as it opens up, a little nutty – is almost creamy on entry.  Going through, the fruit dances  – a slower dance than the Sercial, seamless not serrated.  Building relentlessly to a mouth-watering, tongue teasing finish (think tart mature Cheddar bite), it has a deft lick of demerara and complexing quaff of sweet cigar – café crème – to the back palate.  Really vibrant and on song.

Aged for 16 years in seasoned American oak casks in Funchal; 8000 individually numbered bottles released.  The sweetest of all styles is a suitably deep mahogany hue with sweet toffee apple to the nose and expansive palate.  Rich, ripe and weighty with breadfruit and swooping spices – a jangle of tamarind and smoky black cardamom.  Long and honeyed, though the finish is clean – quite incisive – for such a generous wine.

Cossart Gordon is a drier, firmer style than Blandy’s – racier – and this Vintage Madeira is no exception.  It is a tawny, russet hue with a lively grapefruity nose and palate of spicy orange peel and black cardamom with great scorched earth tang.  A dash of v.a. ‘accelerant’ makes for a pacy, punchy reverberating finish.  It’s a mite dusty, but I like this Bual’s edginess, reverberation and bite. 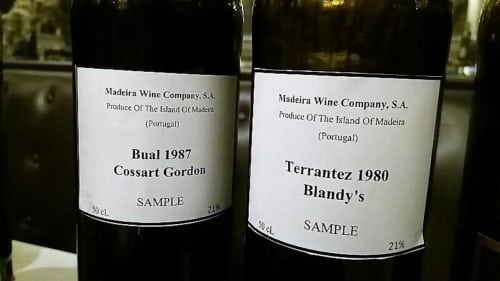 I’m a huge Terrantez fan and this one ticks all the right boxes.  Smooth on the nose with a smooze of light caramel and sweet café crème.  A lick of tobacco herbality – greener – lends appetising lift.  The saliva glands are at work already!  And so it is in the mouth – almost creamy on entry, yet penetrating too thanks to its lively, very persistent backbone of acidity.  Delicate staccato spices and a lick of toffee apple seduce.  That bottled electricity, v.a. accelerant fires up a super long, reverberating finish, its delicious woody, mellow timbre deftly leavened by that light, herbal riff. Ding dong!

Earlier this year Blandy’s launched a 30 Year Old Bual.  Now this 50 Year Old Malmsey (only the second 50 Year Old I’ve tasted (the first being Henriques & Henriques stunning 50 Year Old Tinta Negra).  Blandy explained that this Madeira comprises the left overs after bottling Vintage/Colheita wines.  The ‘off-cuts’ (my phrase) are now being bottled in either 75cl or demi johns.  Only 400l of this Madeira was produced (and bottled in 50cl format).  The oldest blending component is a 1952 Malmsey, but the greater part is from 1964 and 1965 and the youngest element from 1978. It’s a savoury wine for a Malmsey.  Shown blind, I was guessing Verdelho as this deep ruddy coloured Madeira opened up with smoky guava, breadfruit, dessicated lime zest and kelp.  But as it unfurled, sweet coffee, chocolate and bourbon vanilla notes emerged.  Being non-vintage, it’s quite the melange of flavours, slightly malty, with herbal lift, bouillon/miso – very umami.  Yet to come together, it is nonetheless an intriguing wine.  I’d have liked to linger over it.

The last release of this wine that I tasted was the stunning razor-sharp 200th anniversary bottling whose purity and line loomed large in my mind.  Which probably explains why, to Blandy’s surprise, I was less taken by this bottle/bottling.  It was a little cloudy in appearance and on the nose, which seemed fuggy, a little smoky, with sweet passionfruit undertones. The attack proved much more pleasing – very tangy with good depth of dried fruit, before the fuggy white noise – a dusty/smoky character – returned.   Blandy reckoned it would have benefitted from decanting a couple of days earlier (I believe it was decanted that day).  Going back to it at the end of the tasting the fruit – dried fig – seemed to be unfurling, so lesson learned.

This mesmerising, remarkably old, remarkable Madeira comes from Blandy’s rare demi-john selection. A deep hue, it was bottled from demi-john in 2013. Wow – great charge and intensity to its mouth-watering, aromatic, very spicy, still round and deep, chutneyed fruit – amazing energy,  again the v.a. accelerant adding wonderful lift and pace. Notes of coffee grindings, fresh hazelnuts, struck match and earthy tumeric emerge going through. Rapier-like acidity makes for a swashbuckling finish of great persistence, resonance and panache. I make no apologies for all the superlatives and tumult of ‘adjectivitus.’  This is an utterly compelling Madeira and an immense treat.  Thank you Mr Blandy.