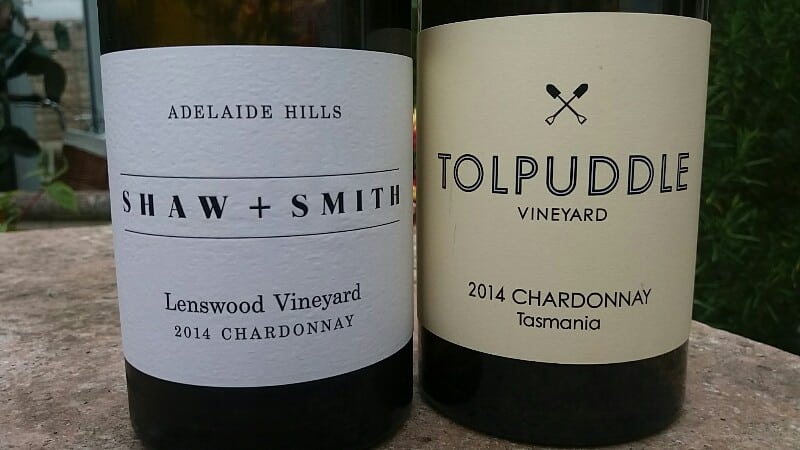 Though founded more than a decade after Petaluma in 1989, Shaw + Smith have been one of Adelaide Hills’ modern pioneers.  It’s good to see founders and cousins Michael Hill-Smith and Martin Shaw have not only consolidated strengths, but continue to dig deep.  Last year they introduced an impressive top tier single vineyard Shiraz to the range – Balhannah.  This year they’ve launched a top tier single vineyard Chardonnay – Lenswood.  It comes from a vineyard which they acquired in 2012, but which the cousins had unsuccessfully tried to buy in 2007.  I love to see this terroir focus.  And it was writ large in the glass when I tasted the Lenswood alongside a Chardonnay from their other recent (2011) acquisition, Tolpuddle Vineyard in Tasmania.

Here are my notes on the latest releases, which are imported by Liberty Wines; the Lenswood is currently in stock while the other wines will become available in August/September.  I tasted the wines on 8 July with David Lemire MW, Shaw & Smith’s roving ambassador whom, incidentally, I just discovered is a co-owner of Mother Vine wine bar in Adelaide.  Must check it out next time. 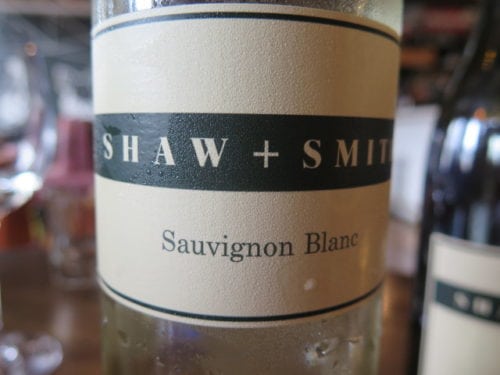 This is Shaw + Smith’s 27th vintage of the wine which launched a 1000 Sauvignons (it is now Adelaide Hills’ lead variety).  The core of the blend comes from Shaw + Smith’s own vineyards at Balhannah, Woodside and Lenswood; the balance is sourced from select vineyards throughout the hills.  According to Lemire, although Sauvignon represents a big part of the business and they still run out of it, the aim is to focus on quality, not quantity – “we’ve gone for the higher path,” he says.  The path more righteous (than your average Kiwi Sauvignon) is about site selection and (hand) picking at optimum ripeness for pristine fruit, texture and mid-palate flavour, as opposed to aromatics at the expense of mid-palate and length.  With these ducks in a row, winemaking is pretty simple – a cool ferment and short maturation on lees prior to bottling early under screwcap for freshness.  Although the fruit was harvested in mild conditions it was an early vintage (early flowering).  The 2016 has a punchy nose with elderflower and passionfruit which follow through on the attack, with guava and edgier, lively nettle and crunched passionfruit seed lift going through.  The lees contact gently enhances mouthfeel and weight.  Very well done, the fruit pristine and intense.    12.6% 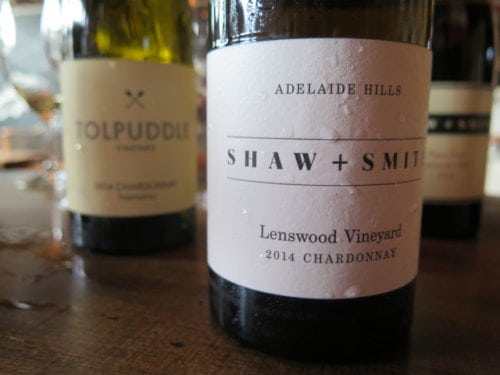 Like Piccadilly Valley, Lenswood is an official sub-region of Adelaide Hills – similarly at the cooler, more elevated end of the Adelaide Hills’ spectrum. This wine is sourced exclusively from Block 4 of Shaw + Smith’s Lenswood vineyard – cool not just because it is at 500 metres above sea level, but also because the site is east-facing with no afternoon sun.  On clay and shale soils, it was planted by Dan Golding in 1999 to Bernard (Burgundy) clones 95,96 & 277.  In this, its maiden release, the vintage was not without its challenges.  Unsettled weather at flowering resulted in low yields and a mid-February heat spike concluded with heavy rain over 24 hours. Fortunately the month which followed was dry, mild and sunny, producing concentrated wines.  This wine was whole-bunch pressed, then fermented in new and used French oak puncheons. It was then aged for 10 months in barrel on lees with gentle stirring and minimal working.  Green apricot to the nose signposts the tension between orchard and citrus fruits which plays out on a classic Adelaide Hills palate.  Just coming out of its shell white peach and lip-smacking icing sugar dusted apples are wed to grapefruity, mineral acidity, making for a long, extended finish.  Flashes of nougat, vanillin oak and savoury/textural leesy sour dough add complexity.  Very good indeed; maintained its composure beautifully over three days, which suggests this wine has great ageing potential.  12% UK RRP £ 54.99 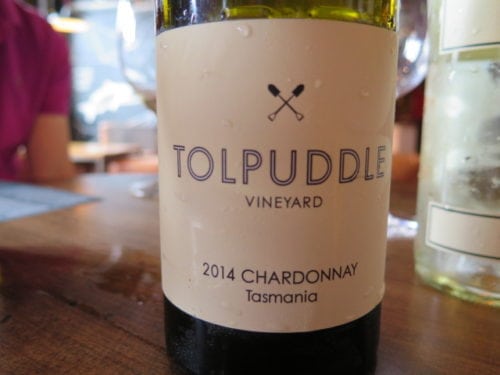 Acquired by Michael Hill Smith MW and Martin Shaw in 2011, the 20 hectare north east facing vineyard is located in the Coal River Valley on light silica over sandstone.  In the rain shadow of Mount Wellington, it is a dry but cold site.  The vineyard was first planted in 1988 by Tony Jordan and Garry Crittenden.  Both Chardonnay and Pinot Noir were sold to, among others, Hardys for their iconic Eileen Hardy label (watch this space for my notes on a vertical of Eileen Hardy Chardonnay from 1986-2014).  While the Lenswood is lipsmacking, Tolpuddle ventures into Riesling territory.  In a low yielding vintage described as cool and, at times cold, this is a very mineral, rapier-like Chardonnay of great focus and intensity.  A complex, hi-energy nose and palate radiates neon-bright notes of lemon verbena, hops, basalt/sulphur, lemon zest, salted limes, grapefruit and sappy apple close to the core.  Subtler sourdough lees and oak spice lend texture and interest without detracting from its purity and intense focus.  Live-wire from tip to toe, the finish is serrated and very long. After the Eileen Hardy vertical, I’d imagine this wine will age very well indeed.   The grapes were all hand-picked, whole-bunch pressed, and fermented in French oak barriques, of which one third were new. The wine spent eight months in barrel with gentle stirring as required, then a further two months in tank on lees prior to bottling. Minimal malolactic fermentation (but, according to Lemire, a little more than in the previous two vintages to enhance body/mouthfeel).  12.5% RRP £ 39.99 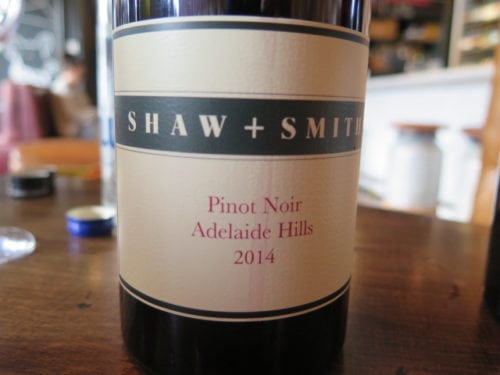 Shaw + Smith’s Adelaide Hills Pinot Noir feels like it is really starting to hit its straps.  A little bit was made in 2007 and sold through the cellar door. In 2008 – “the first decent bit of quantity” said Lemire – it went on general release.   Until the acquisition of the (cooler) Lenswood vineyard in 2012, the fruit came from Shaw & Smith’s Balhannah vineyard behind the winery.  But 100-140mm of rain on Valentines Day drastically reduced (via berry split) the Lenswood component in 2014 – so much for romance!  Lemire told me “we got a barrel or two out of around 8 hectares,” so this wine has more Balhannah fruit.   While, in consequence, the 2014 doesn’t reflect the direction of this Pinot in terms of fruit sourcing, it does reflect the evolution of winemaking – the use of a sorting table, conveyors/forklift to tank to avoid pumping, the use of whole bunch “for grip and back palate” and a more dedicated red ferment space which facilitates longer ferments with gentler extractions (this wine spent extended time on skins pre and post ferment).  The 2014 Pinot Noir was cropped at a measly 1.5t/acre.  It saw around 40% whole bunch and spent around 9 months on lees in French oak (barriques and 500l hogsheads, 30% new).  It has a very pretty perfume of sappy red cherries/cherrystone and cranberries which follow through on the attack.  In the mouth creamier strawberry notes and a kiss of five spice emerge.  A gentle ruffle of suede tannin enhances mouthfeel and length.  Going back at the end of my tasting with Lemire, earthier beetroot and incipient forest floor notes were starting to surface.  A complex but delicate Pinot, bright and intense, with plenty of charm already.  12.5% UK RRP £ 29.99 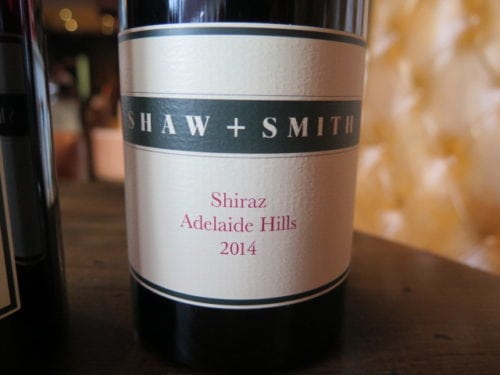 This Shiraz is sourced predominantly from Balhannah in central Adelaide Hills and Macclesfield, a warmer, drier sub-region to the south.   Hand picked and whole berry/whole bunch fermented in open fermenters with gentle plunging and minimal working, winemaker Adam Wadewitz quips no berries were harmed during the making of this wine.   Wearing its cool climate credentials firmly on its sleeve, juicy plum and red and black berry and cherry fruit is delicious spiked/interwoven with lashes and lashes of spicy, savoury, peppery, meaty aromas and flavours.   White and black pepper riffs build going through, enhancing aroma, flavour and and its ever-present attractive rasp of tannin.  Long with persistent mineral acidity, this Shiraz has animated fruit but never lets the sweetness get the better of it.  Indeed wears its French oak lightly (it spent 14 months in barriques and hogsheads, one third new).  Great stuff. 14%