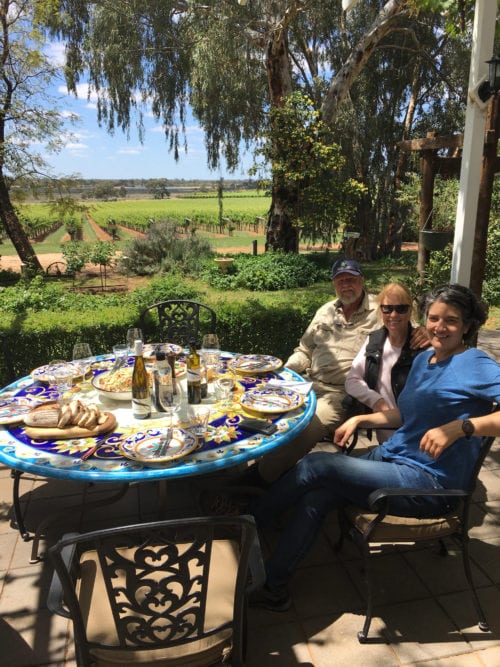 Back in March, I reported on a visit to the Chalmers’ family’s Heathcote vineyard, home to two dozen different Italian grape varieties.  Forget Negroni, it’s the real deal Italian cocktail! This week, I got a chance to visit the Chalmer’s ‘companion cocktail’ vineyard in Merbein, near Mildura in the Murray Darling wine region.  It’s home to some 50 alternative (predominantly Italian) grape varieties, 11 of which the family introduced to Australian soil last year. 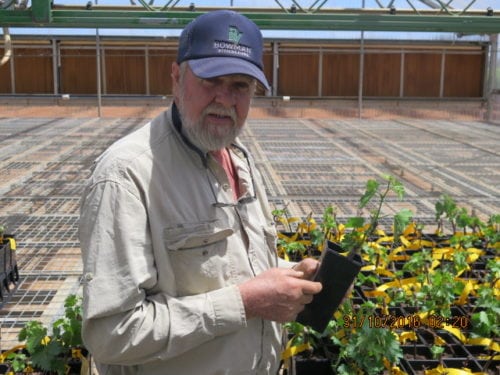 Bruce and Jenni Chalmers are the maestros behind these little Italys.  I met them on Monday at Stonnington, the Merbein property which they bought in 2012 .  It was a great excuse to find out what inspired them to blaze this particular trail. 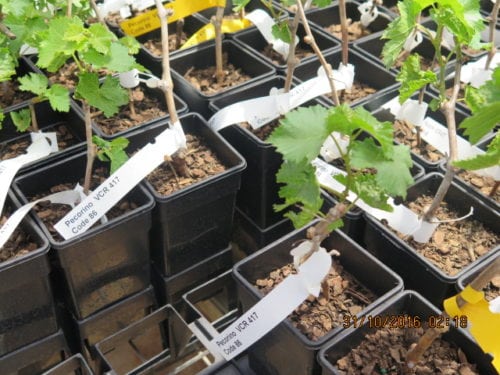 First eleven: Pecorino is one of the latest wave of Italian varieties imported by Chalmers

Bruce explained that the couple’s passion for Italian grapes was sparked by local restaurateur, Stefano de Pieri, who came to Australia from Treviso in 1974. Having fallen in love with Malvasia Istriana, the Chalmers worked their way through de Pieri’s wine list and found much to like.

It’s one thing to like drinking Italian wines and quite another to plant Italian vines in Australia.  Even Bruce (an accountant turned Papua New Guinea shipping company manager turned Mildura nurseryman) admitted “it seemed crazy, we shouldn’t be doing this.”  But on the other hand, he explained “we knew that we had varieties not suited to where they were grown and we knew that the climate was changing.”  In this context, Italian grapes – “especially southern Italian grapes” – made sense. 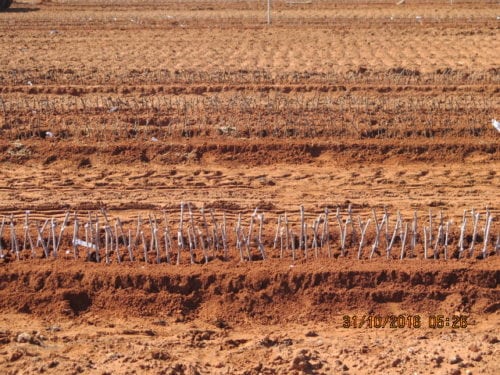 11 mothervines produced around 3000 cuttings.  A year on, they are being planted in Merbein

And there was another factor.   Hot, sunny and irrigated, Murray-Darling has been an engine room of Australian every day wines. So when one of the UK’s most influential buyers – Tesco’s Phil Reedman – complained that, with its poor varietal diet, Australian wine was becoming “boring,” a gauntlet was thrown.

In 1997, Dr Rod Bonfiglioli – the viticulturist at Chalmers’ Nursery – was duly despatched to Italy to make contacts.  The Chalmers imported their first Italian vines in 1998, which were planted at their original Murray Darling property in Euston.  By 2000, Chalmers had introduced 70 clones and varieties to Australia. 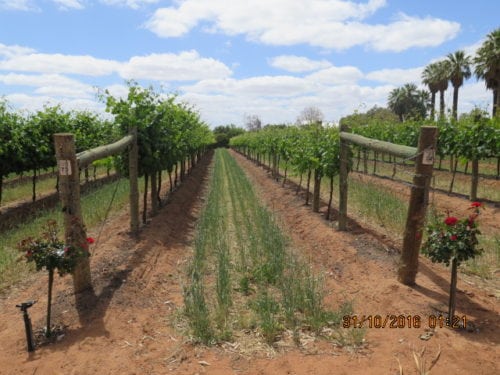 The immediate focus was Sangiovese.  Although Australia had a clone from a Davis selection which had been imported in the 1970s, Bruce explained “it was selected for high yields, which is exactly what you don’t want in Sangiovese.”  In classic Australian wine show ‘improve the breed’ mode, the Chalmers, de Pieri and Bonfiglioli established the Sangiovese Challenge in 1998 to encourage knowledge-sharing about the grape.  Bruce recalls there were 28 entries, all Sangiovese blends.

In 2001, the Sangiovese Challenge morphed into the Australian Alternative Variety Wine Show (at which I am judging this week).  It is a measure of the Chalmers’ success that this year’s entries stand at a record breaking 776 wines made from 102 different grape varieties.  Still, Bruce told me that converting the big corporates to  alternative grape varieties had been far from plain sailing (despite them being major Tesco suppliers).

Exports were booming, so from an industry perspective, why fix what wasn’t broken?  Being given short shrift in the early days partly explains why, from 2003, the Chalmers starting making their own wine, initially under their Murray Darling Collection label . It was a means to showcase their varietal wares, explained Bruce. 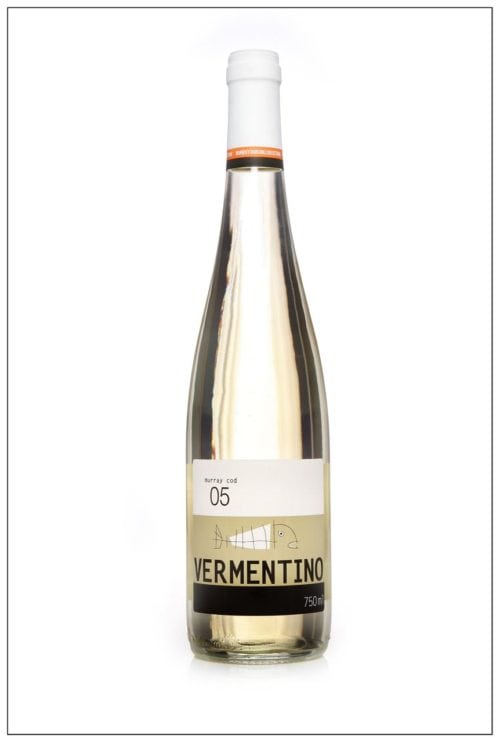 Although The Murray Darling Collection Murray Cod Vermentino found its way onto the wine list at London’s acclaimed River Cafe, the (commodity wine) stigma attached to the Murray Darling region sank this label.  Trading on the family’s viticultural pioneering reputation rather than the region, “Chalmers” has proved to be the better brand.

By 2008/2009, Treasury Wine Estates were the first corporate to change their mind. Bruce is not surprised about which alternative varieties have taken off.  Pinot Grigio (which is in strong global demand), Vermentino and Fiano for their acid retention and, this one surprised me, Lambrusco Maestri. Its deep colour, acidity and lift make it a useful (unadvertised) blending component for everyday Cabernet Sauvignons – it’s cheaper than tartaric acid (which is commonly used to acidify wines), he points out. Looking ahead, he tips Falanghina for success. 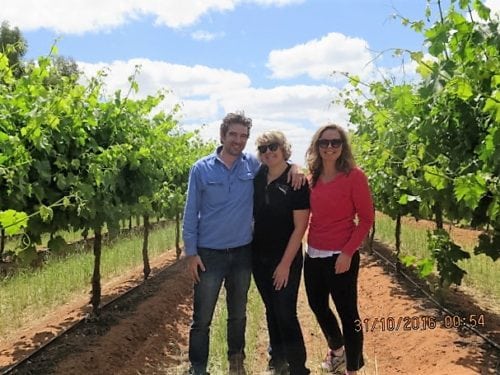 As for the Chalmers own eponymous wine brand, it goes from strength to strength.  Originally the entire production was made by Kooyong in Mornington Peninsula but, this year, a third was made in-house in Bruce’s old tractor shed, (hand) bottling line pictured.  Bruce and Jenni’s daughter Tennille,a former sommelier, makes the wines with winemaker Bart van Olphen, husband of their older daughter Kim, Chalmers’ marketeer. 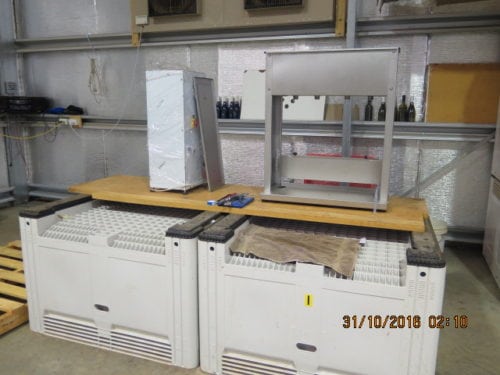 The in house project kicked off three years ago with boundary pushing #bucketwines made from grapes crushed by hand in sieves, aged in demi-johns and bottled under crown cap in beer bottles.  Though experimental, they were so well received in Melbourne (by far their biggest market) that Chalmers’ distributor encouraged them to make and bottle more (in conventional bottles under screwcap).  These naturally fermented, unfiltered, hand bottled and labelled wines are now sold under Chalmers “Project” label. 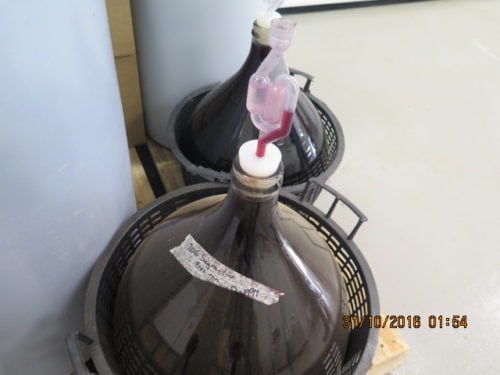 No stranger to alternative varieties, van Olphen, who worked with Steve Pannell for several years, is  plainly enjoying the challenge of tackling esoteric varieties like Nociola and Pavana.  For Tennille, it’s important “because now our connection to our wine is so much stronger.”  Summarising their approach as being about “letting the wines do their own thing,” she points out there’s no recipe when you don’t know a variety, even if you have pre-conceptions about how the wine should be in terms of body or texture, or based on examples from the native country.  Van Olphen agrees – “we go with what the wines are telling you…I’m starving, I’m hungry!” 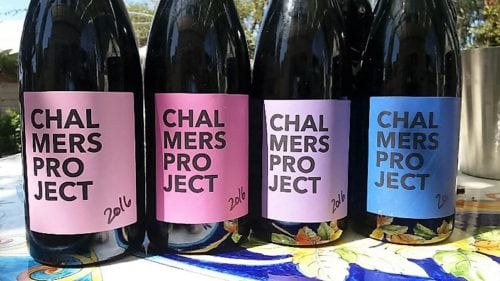 Well, I can tell you, they appear to have brought up those esoteric grapes/wines well, but not too well.  As in they have bucket loads of character.  Four 2016 Chalmers Project Merbein Aglianicos hand picked from four adjacent rows the same day but to different clones have very much their own voice.  My pick?  The Vulture Clone MAT 2.  As for this variety’s great potential in Murray Darling, look no further than this second crop 2005 example – still fresh, with great tertiary (and very varietal) sandalwood and tarry complexity. 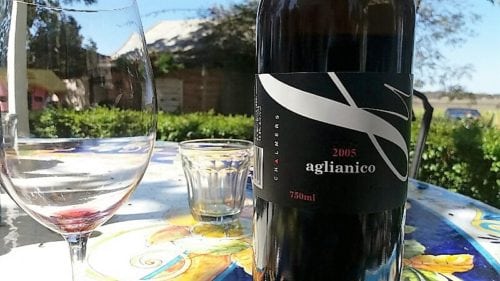 Turning to the latest crop of newbies, Van Olphen is as tickled pink about Pavana – he reckons Australia’s one and only – as this red wine looks.  It’s fresh with blood orange, pink grapefruit, wormwood and lifted white pepper and has a dry, pithy spine. Really sapid and food friendly. 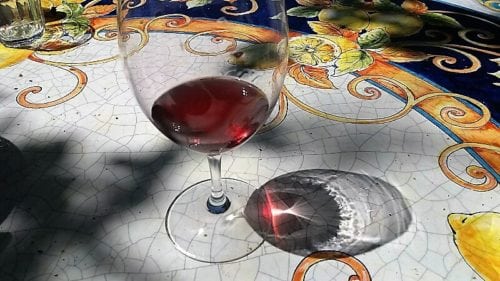 A pale salmon Refosco Rosé from Heathcote has an Aperol nose and palate with an exciting tension between its ’round’ orange oil taste and texture and nip and tuck of acidity. 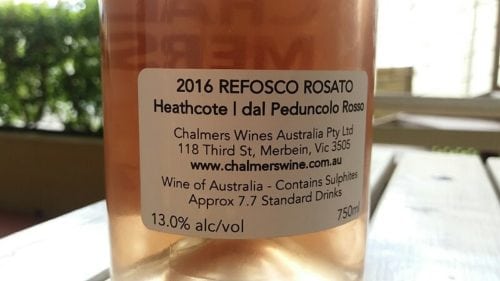 The Nociola, another Heathcote wine is very singular, with a basalt, tangy, warm volcanic rock character, chalky texture and green tea notes to a palate which is more perfumed than fruity. 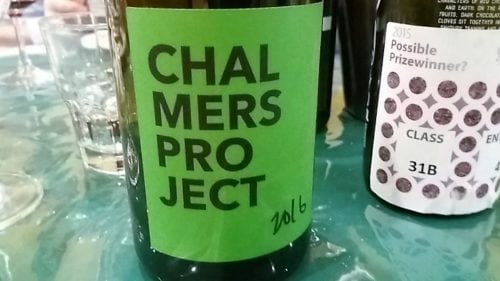 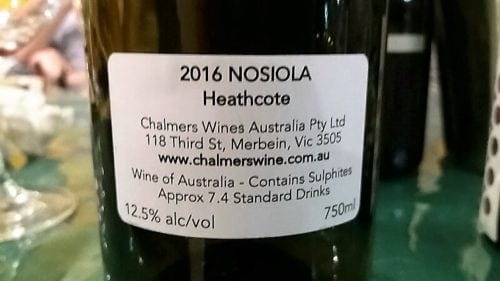