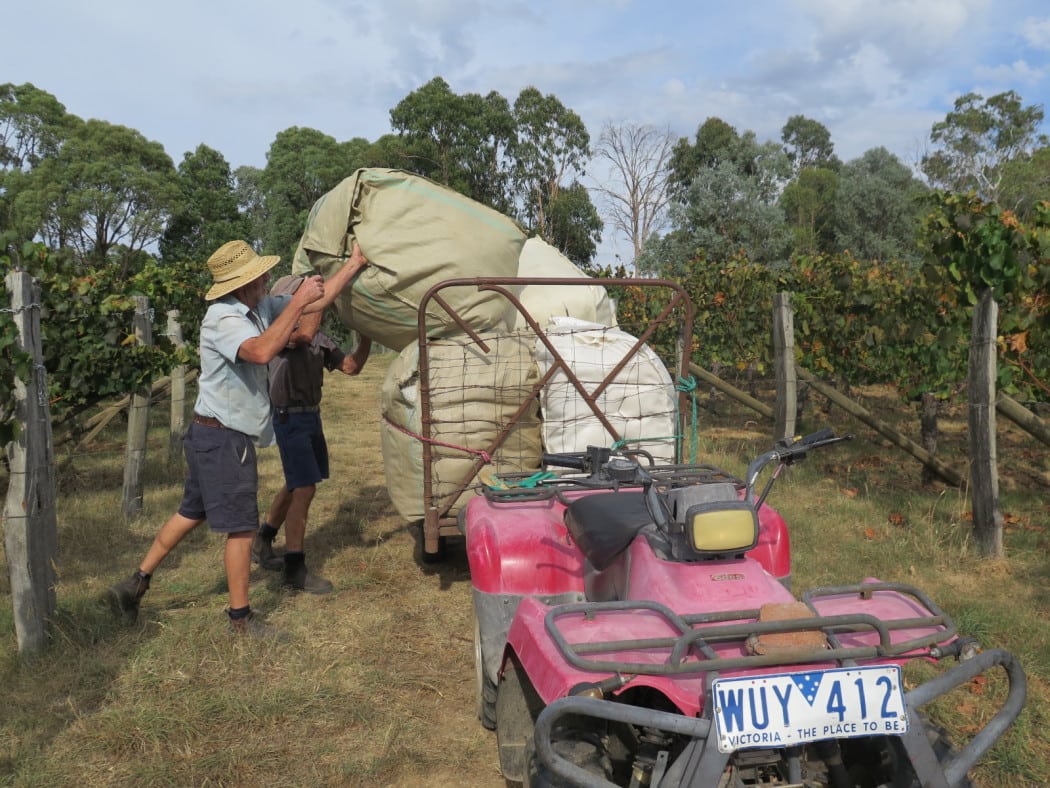 A visit with Sorrenberg, Beechworth 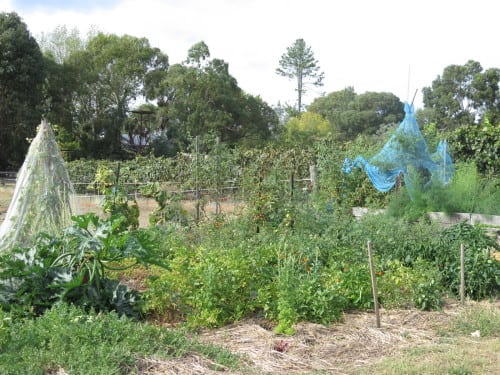 My parents are real grafters, strong nurturers and home builders.  Qualities I detected in Barry and Jan Morey, the couple behind Sorrenberg in Beechworth, Victoria. The Morey’s original 3ha vineyard is right next door to their home; one senses it is, like a garden, part and parcel of their home.  In fact, when we tasted Chardonnay barrel samples from this vineyard (in the cellar which they built themselves under the garden of their home), Barry described it as “the House Block” – ’nuff said. 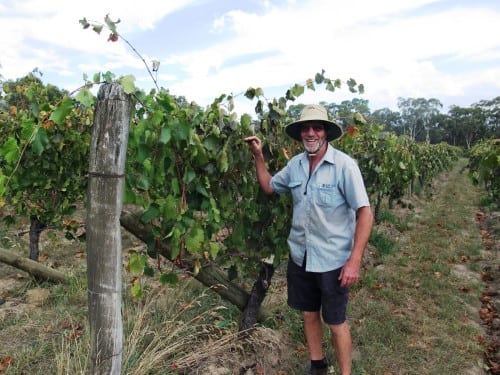 Barry Morey – “I spend lots of time in the vineyard.”

Like fellow Beechworth pioneer Giaconda’s Rick Kinzbrunner, Morey worked at local big fish Brown Brothers (whose Milawa HQ is just 30km away).  But while Kinzbrunner was a winemaker, Morey started out as a maintenance man. When I asked him how he ended up making wine his answer was simple – “John Brown used to sit down and open bottles of wine” (dispensing, Morey observed, with the traditional divide between cellar hands and winemakers). And it would seem the “fantastic” Mr Brown’s irrepressible enthusiasm for wine infected Morey with that most potent of bugs – the wine bug. 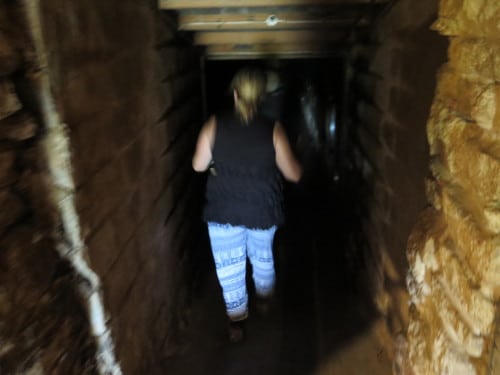 Bustling off into the cellar – Jan Morey

By 1985, just 3 years after Kinzbrunner, Morey had planted the House Block.  Of those early years Jan recalled “we were buying barrels when there was hardly any furniture to sit on,” before pointedly adding she insisted the house came first when the subject of a second cellar came up!  Like the cellars, the winery is unflashy.   For Morey, the soil is the most important thing – where good wine starts. 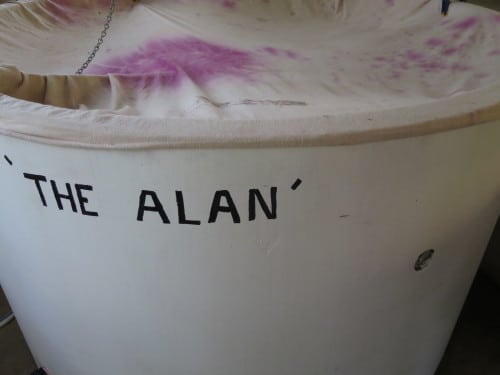 The couple used sustainable farming methods from early on,  Biodynamic cultivation started in 2000 and, since 2008, both the House Block and a second vineyard, Rhino Block (a couple of acres up the road planted in 2005) have been certified biodynamic.  During this time, Morey told me he is convinced that you must use preparation 500 which, he says, has “hugely” improved the water-holding capacity of the soils. 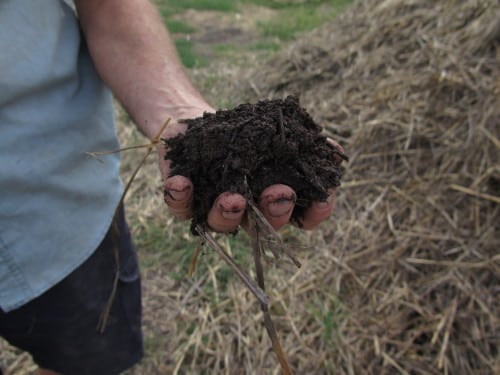 It’s all about the soil – compost at Sorrenberg

The House block is on granite and transitional Stanley mudstone red soils with quartz, the red soil’s clay having much better water retention than granite.  The clay tends to result in wines with more body than the Rhino block’s hungrier, rocky granite soils, whose wines have greater nervosity.  Tasting barrel samples from each vineyard it seemed to me that both produce grapes with excellent natural acidity.  No doubt it helps that, at 560m and 595m, they are among the region’s higher sites. 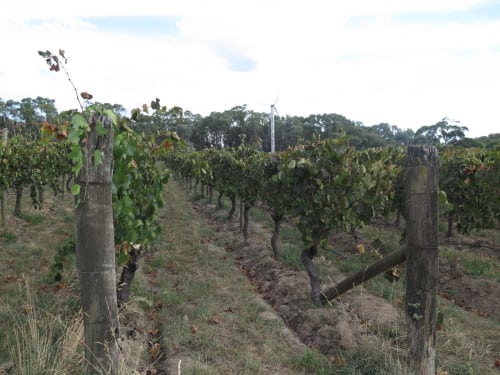 Even so the site is frost prone, hence the frost fan which apparently sounds like a helicopter when it is switched on. Noisy and expensive it might be, but it’s indispensable when you consider that Sorrenberg’s crop was wiped out by frost in 2007.   Morey’s maintenance skills came in handy that year.  He converted his equipment to run on fish and chip oil “for something to do.” 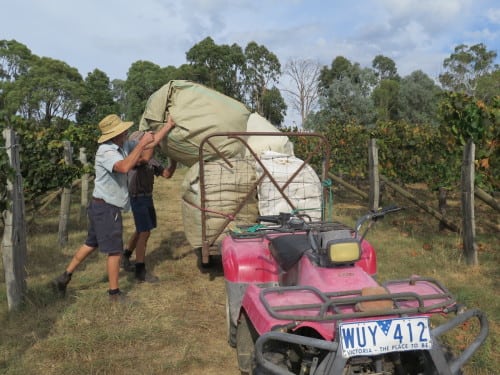 Birds are another hazard – packing away bird nets by the bale

A disadvantage of the frost fan is that it can propel eucalyptus leaves into grape bunches (the House Block is bordered on two sides by eucalyptus trees).  Because everything is hand picked in 20kg tubs, leaves can be dislodged and disposed of at point of harvest.   Though I picked up eucalpytus notes in a couple of the wines, the influence was subtle/negligible.

The Moreys are best known for their Chardonnay and Gamay which are grown on both vineyards.  Sauvignon Blanc, Semillon, Cabernet Sauvignon, and small amounts of Cabernet Franc and Merlot are additionally grown at the House Block.  Here are my notes on the wines, which I tasted on 8 March at a generic Beechworth tasting and on 9 March at Sorrenberg:

A blend of 80% Sauvignon Blanc and 20% Semillon. The Sauvignon Blanc (most of which underwent 8 hours’ skin contact prior to pressing) dominates the nose and palate at the moment, showing strong varietal character.  But this wine has an extra dimension (depth and body), also restraint, which barrel fermenting (natural yeasts) and ageing Sauvignon in predominantly larger format barrels on lees brings to the party. A very balanced palate reveals nice tension between its crisp and sweet, creamier apple, blackcurrant bud, bay leaf and elderflower notes. Persistent and youthfully pretty, with plenty yet to give.  13.5%

This was a very difficult, wet year with heavy fruit loss –  a third of white grapes and around 10% of red.  Still, this has lovely intensity and persistence.  I picked up a trace of eucalyptus but otherwise it shows classic pea pod, blackcurrant bud and bay leaf spice with a lick of honey to its shapely apple and delicate elderberry fruit.

Two Australian wines from some 400 tasted over March made the cut for my April Wines of the Month.  This was one of them, moreover one of a very strong line up of Beechworth Chardonnays.  I tasted over a hundred Beechworth wines during my two day visit.  Long enough to convince me that Chardonnay produces its most compelling and consistent wines (which will surprise no-one who has tasted its most famous example, from Giaconda).  The Giaconda Chardonnays I tasted from barrel and bottle impressed me greatly, but the one that brings the widest smile to my lips is this Chardonnay.  The Moreys have an intensity about their work yet a lightness of being which shines through in their wines.  Fruit power and persistence wed to winemaking excellence – an ability to harness oak, lees and malo to great effect – mark out the best Beechworth Chardonnays.  The Sorrenberg excels in all three, with a subtly dried honey and nougat accented nose and palate and great sweep to its shapely, but very lithe white peach and poached pear fruit.  Insinuating, ripe, grapefruity acidity makes for lovely intensity and persistence of flavour and, with not a hard edge (of acid, oak, alcohol) in sight, it has a beguilingly soft and yielding character.  Great generosity, without feeling heavy. In a word, ambrosial.   It was naturally fermented in French oak barrels, 25-30% new and underwent a complete malo-lactic fermentation. During its first 10 months in barrel this beautifully balanced Chardonnay was lees-aged with batonnage, then spent a further 8 months in oak prior to bottling with minimal  filtration. 13.4%. Sorrenberg wines are imported by Les Caves de Pyrene who have a shop for retail sales; the 2011 vintage is £32.50 at Lay & Wheeler.

Morey recalled this was a pretty good year, with not especially high baumés.  The style, which he has maintained from the off (which suits both vineyard and what he likes to make), is consistently peachy, with nutty oak, subtly creamy leesy influence and balanced, ripe but persistent acidity. The relative mildness of the years shows through in a green almond, slightly grassy note. 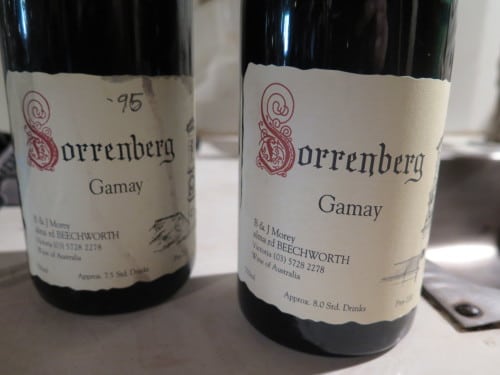 The Moreys planted Gamay from the off and have made a great success of it even though Barry describes it as “cursed in some ways.”  Why? Because the vine’s natural vigour transfers directly to the fruit, which he vividly described as “sticking out like a dog’s balls.”  It meant that his first Gamays were rosés because the resulting wines were so light.  The solution?  To drop anywhere between one third and one half of the crop.  He reckons that the current 2016 vintage (which he’d picked 3 weeks previously and just pressed off) looks like “a winner.”  Meantime, the 2015 was just on the point of being released.  Apparently, it was a big year in terms of crop levels – the rain really pumped up berry size – which perhaps explains why this vintage shows red berry and currant as well as crushed blackcurrant fruit wed to pithy tannins.  It’s juicily persistent if not as concentrated as the 2014 or 2010, with sweet spices, violets and almond/frangipane to its lacy finish.  A pretty wine.

I tasted the 2014 vintage alongside a Gamay from the region’s other 1980’s pioneer, Pennyweight; the Sorrenberg is a more structured, weightier style, with a much deeper hue/opacity.   Made with 10% Pinot Noir, 50% of Sorrenberg’s Gamay is cold soaked for 4 days before fermentation starts while, of the balance, 20% is left whole in the ferment. The wine is fermented with natural yeast for 2 weeks on skins, after which it is pressed and matured in oak for eleven months.  The 2014 vintage has a creamy, supple palate of black cherry with liquorice/star anise (dried) spice and deep set floral, peony notes – the latter very much part of the fabric of the wine, not just the perfume. Fine ruffled tannins lend texture and length.  Lovely intensity.  13.3%

Barry dug out a 1995 but, though I could still detect sweet fruit, it was corked.  Shame. The 2010 shares the same subtle (bison) grassy undertow on the finish that I detected in the Chardonnay from this mild year.  Curious.  But it’s the fruit and flowers that grab the attention from the off, with its blueberry and peony nose and juicy, lingering blackcurrants – intense but with a sluiced quality, an elegant translucency.  Long, very persistent with dried herb nuances to the finish.   Plainly shows that this wine has at least several years’ ageing potential.  13.6%

The blend is described (rather vaguely!) as consisting of 30-40% Merlot and Cabernet Franc with the remaining Cabernet Sauvignon. Bordeaux varieties are not the easiest bet in terms of ripening in Beechworth.   Low cropping is a must.  This reminds me of Yarra Cabernets in that it’s quite soft in terms of both tannin structure and fruit, yet it’s not short of tannin or fruit, whilst quite savoury.   It all sounds a bit of a conundrum, but it pans out nicely on the palate which has an earthy, attractive Puy lentil undertow to its supple, teetering on soupy blueberry and mulberry.  There’s a touch of eucalyptus and bay leaf spice for lift and layer.  Fine, ripe, well integrated but plentiful tannins tease out the fruit bringing line and length to the palate.  Age-ability too.  Half of the Cabernet Sauvignon was fermented for 2 weeks on skins with plunging of the cap 4 times a day. The balance of the wine was fermented for 4 weeks on skins before pressing. It was aged for 24 months in oak before final blending and bottling without filtration. A characterful Bordeaux blend – not as polished as some but I think that’s a good thing.  It doesn’t taste tweaked.  13.6%