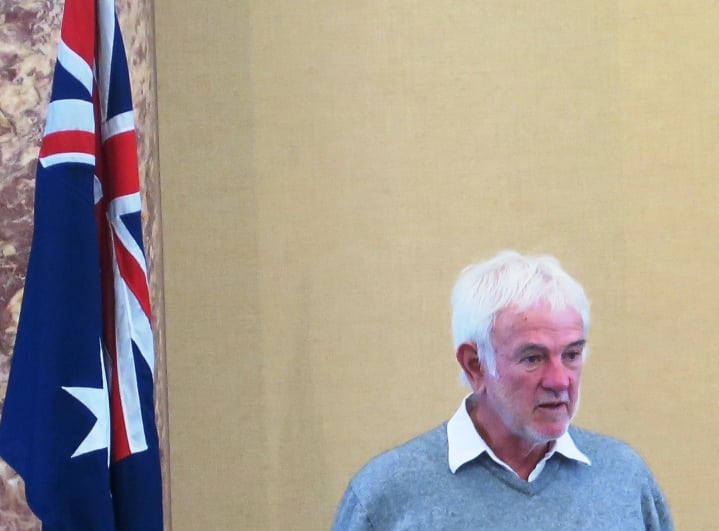 Giaconda’s Rick Kinzbrunner was in town this month and I felt super lucky to attend his vertical tasting of one of Australia’s most acclaimed Chardonnays; four vintages of Warner Vineyard Shiraz too.   Especially when Wine Australia’s Laura Jewell MW pointed out we’d be consuming around a fifth of the entire UK quota of these rare as hens’ teeth wines!

It was only the second time I’ve met Kinzbrunner.  Though laconic, shy even, both he and his wines, the Chardonnay in particular, exude a strong sense of belief and place.  A grounded-ness as deep rooted and unshakeable as his cellar 25 metres underground. The former engineer used 2.5t of dynamite to blast it out of Beechworth’s 600 million year old granite rock.  Quite an endeavour (and rather expensive one imagines).  When I asked Kinzbrunner if it was worth it, he looks me firmly in the eye.  Some thirty years into crafting Giaconda, it’s about the little details he says. 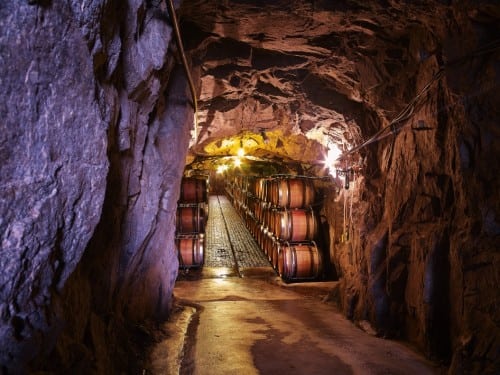 Kinzbrunner took the big plunge and acquired the vineyard in the early 80s, first planting it in 1982.  The way he tells it, it really was a plunge into the unknown.  Kinzbrunner had spent the ’70s working in New Zealand, at Stag’s Leap, Simi and Matanzas Creek in the Napa and Sonoma Valleys, California (where he studied winemaking at Davis University), then in Bordeaux for the Moueix group, co-owner of Chateau Petrus.  On his return to Australia in 1980 the assistant winemaker at Brown Brothers discovered Beechworth.  Saying “I always loved it,” he told us “one day I saw a for sale sign for some land, thought hmm and bought it.  I didn’t know about the water or soil.  It was good luck…instinct.”

And it would seem he is content for wine to retain a degree of enigma.  After all, Kinzbrunner named his own wine Giaconda after the Mona Lisa a.k.a. La Gioconda.  When I ask him what makes Beechworth such a special spot for wine yes, he talks terroir – soils with less mineralised granite than others nearby, also clay, a climate not cool but influenced by the valley topography, so relatively high (430m) and relatively sheltered with a south-facing (cooler) aspect for Chardonnay and north-facing warmer slopes for Shiraz.  But Kinzbrunner concludes with a shrug, “we get good results all round and the area generally makes a more refined style of wine than other parts of Australia, a little un-Australian in some ways, but I don’t exactly know why….” 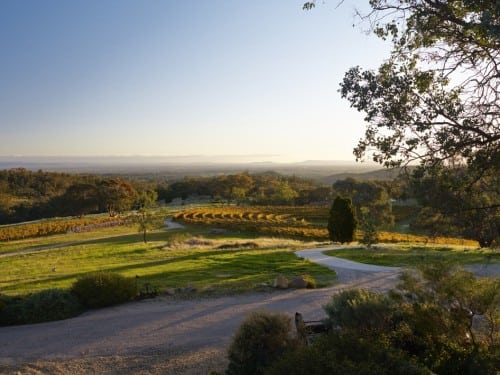 Describing it “as a great comfort being able to produce great Chardonnay there,” his approach centres around a simple but very compelling philosophy – “making wine in the style I like to drink.”  Which is why, Kinzbrunner explained, “I don’t try and change according to the latest fashion.”  So though he is picking earlier and making his Chardonnays a bit lighter, he asserts it’s “more a function of global warming than fashion.”

As for the process, Kinzbrunner favours non-interventionism.  In the vineyard he “really, really loves organic principles and has experimented with biodynamics.”  At the end of the day he wants to leave the land “in the condition it has always been in.”  In the cellar he doesn’t inoculate yeasts or use stainless steel.  He prefers an old fashioned basket press, barrel ferments the whites and ferments the reds in concrete.  Using his 25m deep cellar to good advantage, gravity not pumps moves the juice. Kinzbrunner neither fines nor filters his wines.

Apart from the cellar (which was created in 2008) and a new Beechworth planting of Nebbiolo in 2011 at Red Hill, the most significant change of late has been the rationalisation of Giaconda’s portfolio. For Kinzbrunner, it’s in order “to show the best of terroir and make the wines I really enjoy making – in the last few years, I do less and do better.” So that’s meant no more Roussanne or Cabernet Sauvignon (the latter the “most difficult,” he says).  Most of the estate wines are now from his own vineyards. California was “a big influence” on Kinzbrunner’s style of Chardonnay (he worked lots with David Ramey, now of Ramey Wines), also great white Burgundy – the traditional styles “with an interesting, match-sticky nose…Coche Dury, Leflaive 2004/2005.” (He lamented the fact that “these days wines are cleaner and cleaner.”)

This match-sticky character surfaces in Kinzbrunner’s own wine and, no doubt, is partly related to the fact he lees stirs “as little as possible…maybe early on, more in new than old barrels.”  With minimal working of the wines which are “quite heavily oxidised early on” so that they remain more stable later on, he uses “a decent amount of solids but not full solids.”

Though acidity is relatively low in Beechworth, so is the pH.  As many an Eden Valley Riesling winemaker will tell you low, pH puts the emphasis on minerality and makes for finer acidity – as expressed by Kinzbrunner, “not cutting acidity, which gives nice feel in mouth.”  This together with phenolics (also good for mouthfeel) and soil-driven minerality is, he says, “enough to balance the relatively low acid.”   Which is important where the Chardonnays undergo a full malolactic fermentation (Kinzbrunner has to do the full malo because he doesn’t filter).  Chardonnays typically see 30% new French oak and are aged in barrel for around 22 months.

My pick of flight?  While we’re into smoking vocab (match sticks and the like) let’s put it this way, though quite different in expression, I couldn’t put a cigarette paper between the 2012 and 2011.  Magic both!  These vintages and the 2010 won most votes from those in attendance, so it’s interesting that Kinzbrunner started picking a little earlier from 2010 onwards and that the 2010 was the first Chardonnay completely aged in the underground cellar.  I asked Kinzbrunner about its impact and he replied “higher humidity, which means more evaporation of alcohol versus the old days when warmer drier cellars meant you gained alcohol because more water evaporated.”  Vis a vis the wines he said it means that they are “a little more delicate,” which was very much my experience based on this tasting.   Little details indeed…. This very pale greeny yellow “preliminary sample” had just arrived by air.   Though inevitably less settled than the older wines, a powerful yet taut nose revealed lifted pineapple, dried pear and grapefruity, nose-tickling acidity.   Notes which followed through in the mouth together with white peach, succulent, tart yellow plum, grapefruit and lime pith, tangy yoghurt and hints of oatmeal.  Great palate presence despite its evident youth. For Kinzbrunner, it looked very much like the (outstanding) 2012 at the same stage of evolution. 13.5%

Deeper yellow.  A strikingly powerful nose reveals earthy, black basalt minerality as well as more energetic, lifted struck match to its white peach, candied lemon and lime peel.  The sense of girth one picks up from the nose materialises on a super-complex palate with savoury layers to its fruit.  Again, great palate presence, which quality is expressed more in depth (and length) than breadth – each wine is a vertical tasting in its own right as you drill down to discover more.  A really long wine with lots of savoury chew and, as I go back to it for the last time, a hint of heady white truffle honey on toast.   A feast but far from a beast.  14%

Lighter yellow, more motile and lifted in the glass with highly expressive struck match/flinty minerals on the nose.  A hint of smoky bacon fat too, which steals across the palate and brings mouthfeel. As it is on the nose it is in the mouth, travelling (relatively) light compared with the 2012, yet with no shortage of intensity and more knife-edge tension in a cooler year at which flavour ripeness came at lower baumes.  Rather the focus is on the struck match high notes and firm backbone of acidity to its sleek white peach, zesty grapefruit and, as it opens up, sweeter dried pear.  An acidity and lift which gives great length and zesty back palate resonance. Terrific.  13%

Yellow gold with a savoury, funky sourdough nose, pinch of sulphides and hint of bacon fat.  In the mouth, the emphasis is on the savoury characters as opposed to the white peach fruit; I detect just a touch of greeness.  For Kinzbrunner who said “2010 is where I want it to be, especially on the sulphides,” it was his favourite wine of the flight.  So I clearly missed something there! 13%

Yellow gold in hue, this is a rich, mature, toasty Chardonnay with a satiny texture and delicious brown butter nuttiness playing around the edges of its quince palate.  A hint of orange peel too.  It feels bigger of frame yet less layered, less intricate, than the younger wines – perhaps a function of bottle age but I wondered if it also reflects warmer cellar conditions and later picking?  Still, no shortage of power or flavour.  13.5%

The only vintage bottled under cork and it showed.  Richer with an oily texture, nougat and ripe yellow peach; it seemed a little flat footed after the younger (screw-capped) wines.  Though it rallied, building in the glass to reveal heady notes of white truffle honey and oak spice, on my last look it seemed a little tired and warm.  Drink up. 14.5% 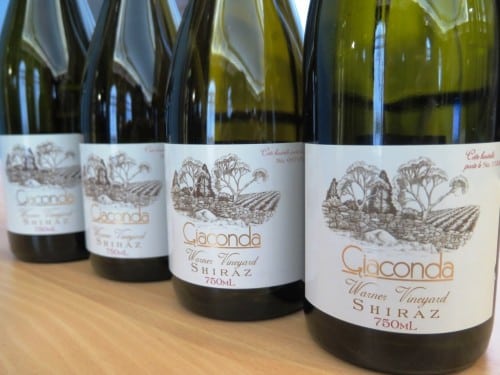 Kinzbrunner is “not looking for a super OTT Shiraz, not a typical Australian style.”  Rather, his aim is to make a European Rhône style Shiraz, though he decries using Syrah on the label – “pretentious,” he says.  Stylistically, it means “a bit more refinement in the wine, that vegetative Shiraz character rather than heavy ripe flavours and mint….the aim is powerful but intense.”

In the vineyard, this means not picking over-ripe and, in the winery, not over-extracting – “I want a grip of tannin but not over-extracted characters.”  To that end he does a portion of whole bunch ferment and does a cold soak before fermenting in concrete and giving the wine an extended ferment on skins for 4-5 weeks.  After basket pressing it undergoes the malo in barrel (1/3 new). Significantly brighter and more youthful looking than the other vintages, still with a pink rim.  Complex plum, sour cherry and blueberry make for an inviting sweet/sour tension on the nose. A tension which is enhanced by a touch of greeness and minerality – a raw, deep, savoury rasp of pepper and hints of iodine.  In the mouth it’s very spicy (this wine had a little more whole bunch than usual), with deliciously vibrant sour maraschino cherry and plum and complex savoury layers of  pine needle, charcuterie/smoked meat (oak), dried lavender, bacon fat and black pepper. It has terrific raw immediacy – I like its subtle pippy rub of fruit tannin very much.  Easily my pick of the flight.  14%

Less edgy than the 2012, this is rounder riper and more yielding than the 2012.  But it still has a lovely vibrancy to its charcuterie-edged sour cherry and plum fruit, together with sweet five spice and meatier black pepper.  I found the tannins a touch punctuating and blocky on the finish which, though not as extended as I expected (give it time to unravel and lose that knottiness), has an attractive earthiness.  On reflection, it’s interesting that I found the 2010 Chardonnay a tad sulky too…they both clearly have so much yet to give.  13.5%

Quite a contrast with the 2012 and 2010, the 2008 is over-ripe with jammy, slightly bloody, raisined fruit.  Though a certain juiciness gives it some length, it lacks the layer and definition of the others.  13.9%

Hints of blood and iodine on the nose and palate which amplify with time in glass.  The brett is too distracting for me though Kinzbrunner is a fan.  Shame, because beneath I can see much to like – the vinosity of mature fruit, persistent acidity and an attractive seam of black and white pepper spice. 13.5%