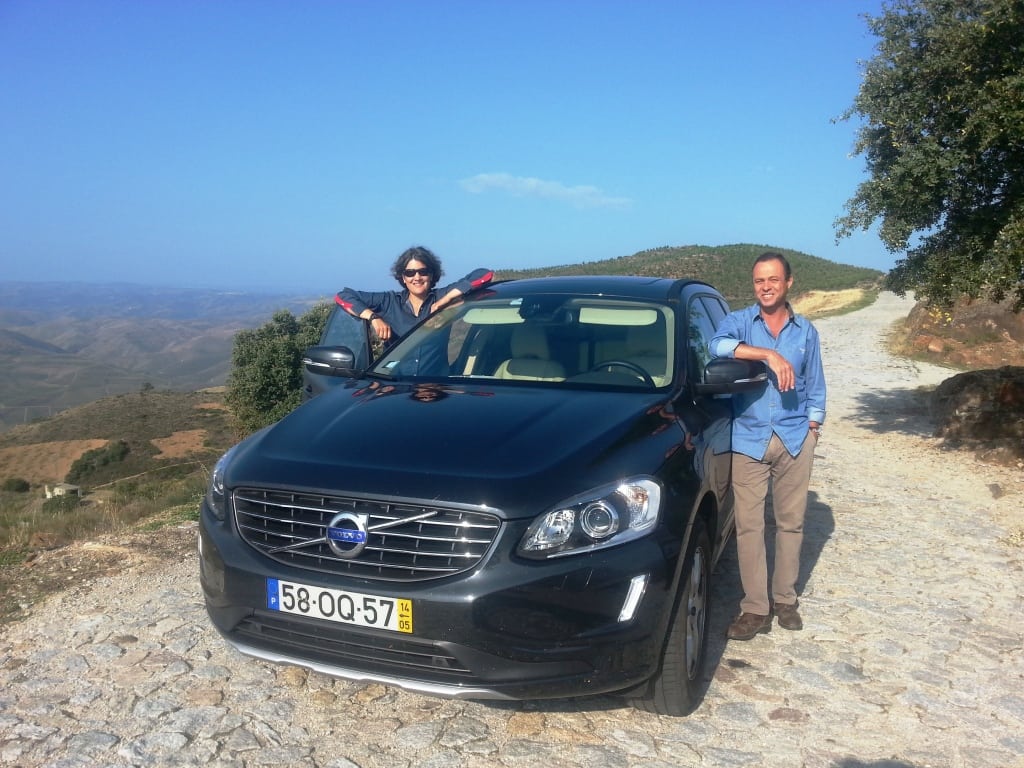 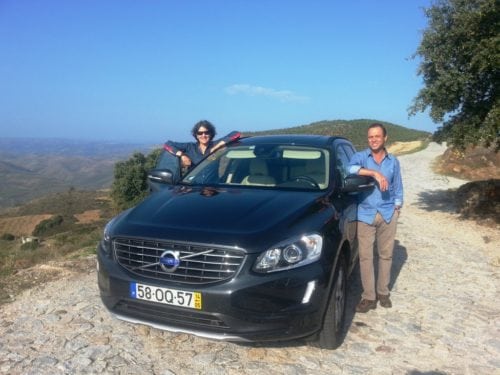 Me on the road with Luis Sottomayor: harvest 2014

Luis Sottomayor was in London earlier this month to present a vertical of Casa Ferreirinha Quinta da Leda.  The Douro Superior estate has been the principal source of Barca Velha since the 1980s (replacing Quinta do Vale Meão).   Shortly afterwards, it was announced that 2008 is a Barca Velha year – the first for which Sottomayor has been responsible from start to finish (he became Chief Winemaker in 2007).

Still, Sottomayor remained tight-lipped about the news when we met.  But it’s quite something – the 2008 will be only the 18th release of this Portuguese/Douro icon since it was created in 1952.  Like the region’s most iconic Port – Quinta do Noval Nacional – it has been ‘declared’ in lauded and unlauded vintages, 2008 being an example of the latter.  It was a milder vintage, but one which produced some elegant fresh wines and Ports (check out my notes on a recent vertical of Niepoort Bioma here).  And elegance is the watchword for Sottomayor and Casa Ferreirinha’s long-lived Douro reds, from Esteva to Barca Velha as this earlier tasting confirmed.  Eighteen thousand bottles of Barca Velha 2008 will be released this October. 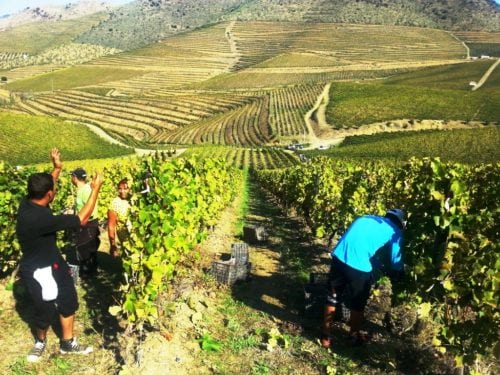 Harvesting at Quinta da Leda in 2014

The multi-aspect virgin site (originally targeted for rye) close to Barca d’Alva was acquired by Casa Ferreirinha in 1979 with Barca Velha in mind. In the beginning, there were only 20-25 hectares of vines planted to the ‘top cinco’ – Tinta Roriz, Touriga Franca, Tinta Barroca, Touriga Nacional & Tinto Cão.  The fruit went into Port, Barca Velha and Vinha Grande.  Today there are almost 160 hectares, all dedicated to Douro DOC wines.

A single vineyard red from Quinta da Leda was first made in 1997.  It is selected from grapes from riper parcels chosen for their greater concentration. The wines are fermented on site at a state of art winery built in 2001 by Sogrape (who acquired the estate/Casa Ferreirinha in 1987), then matured in Vila Nova de Gaia.   The most significant change in the winemaking process appears to be the shift from ageing in 100% new French oak for 12 months to ageing for 18 months in 50% new, 50% seasoned French oak.

I was unable to attend the press tasting, but caught up with Sottomayor the following day.  The bottles had been opened the day before, so the older vintages showed remarkably well.  I’m told that Casa Ferreirinha wines are listed by Hedonism, Harrods, Lay and Wheeler, Farr Vintners, SH Jones/Slurp.

Incidentally, Sottomayor introduced me to a Portuguese term for minerality which will no doubt now litter my posts!  It is “pedragoso” which literally means taste of stone. 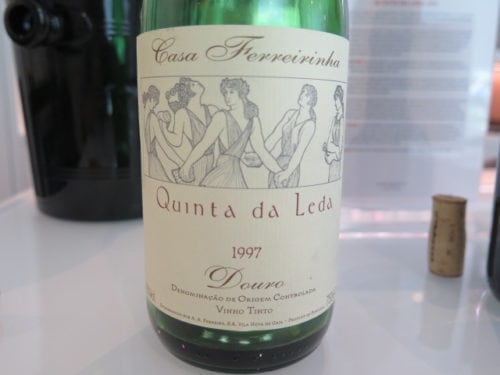 Vintage: A relatively mild and dry winter caused a budding and early flowering. The rains of early April were followed by good weather keeping the plants healthy. August was dry with temperatures below average that allowed for an even ripening of each variety. Rain in August also ensured that the grapes were healthily balanced before harvest. Temperatures remained relatively high until the end of September, allowing a healthy crop and high quality. Harvest began in early September and continued to October.

Tasting note: This the first release (just 7000 bottles produced) was made in a classic Vintage Port year.  This bottle showed better than the example I tasted with Sottomayor last year.  The wine was very expressive  – deep plum in hue, the core broad and opaque.  It showed sweet plum with subtle ‘shades’ of toast, roasted coffee, esteva, pine needle and (attractive) tufa/mushroom earthiness.  A lively backbone of acidity and salty/iodine to the finish give length and a sense of freshness – great persistence.  Going back at the end of the tasting the 1997 has become even more expressive with beautiful tertiary notes of smoky iodine, clove and lashings of lifted cedar, the fruit still very much present. Impressive; still more to give but so attractive now. 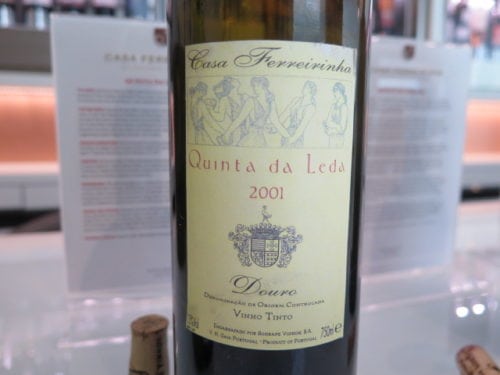 Vintage: Following one of the wettest winters on record the weather during the flowering period was fine and dry. Good flowering and fruit set meant that despite a moderate summer the grapes were ripe and healthy by harvest time. Grape harvest lasted from mid-September to mid-October.

Tasting note:  this milder year has produced a very youthful wine, with a vivid intensity of blackcurrant fruit and Touriga Nacional exuberance to the mid-palate – all florals and bouncy fruit.   There are hints of dark coffee, tufa and toast and, to the finish, a shower of fine, sooty (very mineral) tannins.  Long and persistent; going back, it remains firm, focused and mineral.  An elegant, structured year, with darker but more focused fruits than the ’97.  This was the first vintage to be made in the new winery.  Perhaps that made a contribution to this wine’s freshness too? 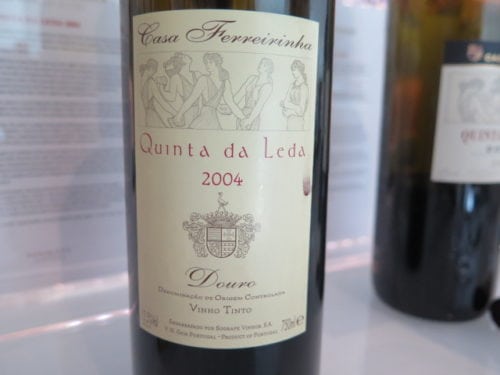 Vintage: 2004 was a very warm and dry year. Even though there was little rain during the Winter and Spring, leading to a reduction in vine diseases, early September threatened a reversal of this situation because of the abnormally high rainfall in August. Fortunately the situation changed radically and the harvest was very warm and dry. It got under way in mid-September and lasted to the end of October, with heavy rain in its final stages which did not affect the quality of the most fragile grapes, which had already been picked.  The 2004 vintage was the first year of production with the new vineyards after the new vines had reached optimum maturity.

Tasting note: betraying the warmer year, the 2004 has the hallmark spiciness and esteva (resin) notes I associate with this vintage.  This is a powerful, pungent wine with depth and creamy breadth to its confit plum, sweet blueberry, juicier fruits of the forest and panforte dried fruit palate, the whole well supported by rich, ripe tannins.   With a salty piquancy and pronounced esteva, the finish is really vinous.  Palate-stainingingly substantial, yet very well balanced.  Much yet to give. 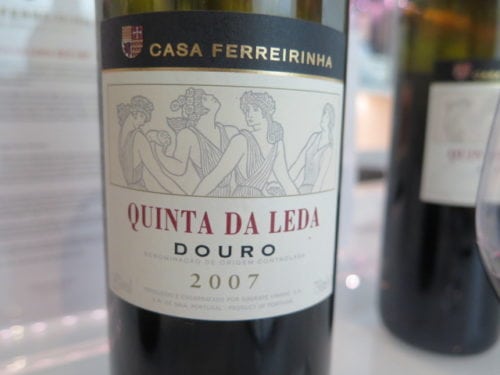 Vintage: 2006 had a remarkably rainy winter that replenished the groundwater ahead of the 2007 growing season. Moderate temperatures gave way to higher than average rainfall in May and June. A warm and dry July and August helped progress the maturation of the fruit on the vine with harvest taking place in uncertain weather that fluctuated between hot and wet giving the grapes optimum ripeness.

Tasting note: this classic Vintage Port delivers a terrific vintage of Leda in the same floral, elegant vein.   It’s floral, a little peppery, on a playful nose with a sense of great freshness and animation.  In the mouth, subtly concentrated, very bright and well-defined blackcurrant fruit steals over rather than dominates the palate, extending this finely honed, very persistent wine.  Ever-present notes of violets and stonewashed minerals are seamlessly interwoven with the fruit; going back, hints of roast coffee (oak) emerge.  This youthful wine is building, yet retains its elegance. Sheer class in a glass; drinking beautifully now with the freshness to age well into the future. 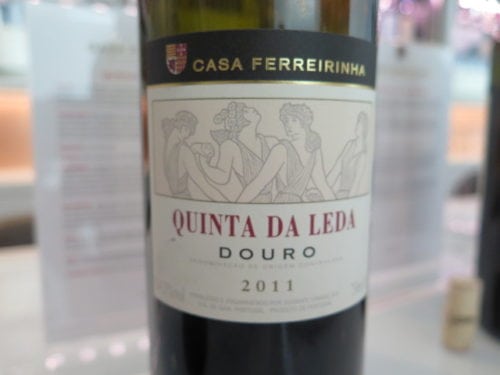 Vintage: Rain in winter provided the vines with the perfect nourishment for the warm spring and the important flowering and fruit set months of April and May. June and July were dry with slightly below average temperatures. Rain in August followed by a warm dry September provided optimum conditions for a long ripening period and exquisitely balanced grapes.

Tasting note: 2011 produced some of the most highly regarded classic Port vintages. This wine absolutely nails the vintage too – high in everything, so it is supremely balanced and very ageworthy.  The 2011 is inky purple, with slate/schist-edged fleshy plum, juicy blackberry and more tightly coiled blackcurrant – relentless fruit, which makes light work of integrating both oak and this wine’s ripe, powerful tannins. Indeed, the 2011 has almost a melt in the mouth quality thanks to the ripe acidity which teases out its great concentration and intensity of dark fruit over an exceedingly long finish.  A finish which is deliciously interlaced with anise, clove, cedar and bitter chocolate/cocoa.  No brooding here, though there is plenty yet to give.  The final impression – especially going back – is one of pedragoso – terrific gravelly back palate minerality, structure and poise. 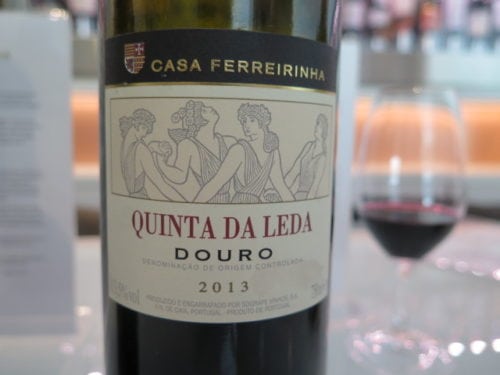 Vintage: A very wet and cold rainy winter marked an inauspicious start to the 2013 growing season. Flowering was later than usual and in some cases quite irregular. The weather improved in the summer which was both hot and dry (the 6th driest on record since 1931). This continued the late trend of the growing cycle with harvest beginning 8-10 days later than normal. Some rain at harvest made picking difficult and extra care was taken to ensure only the ripest bunches were used.

Tasting note: I find this wine quite typical of the vintage in its sulkiness, so it was useful to discuss it with Sottomayor.  He expressed the view that 2013 was released too early, though he believes it is perfect now.  For him, though most of the grapes for this wine were harvested before the rain, there was an issue with fruit dilution, not tannin quality, in 2013.  With the freshness of the vintage, he expects that the wines will age well.  I found the 2013 much rawer than the other wines, including the 2014 (which also suffered from rain at harvest).  Because the fruit is sulky the oak and graphite tannins seem quite pronounced; though fresh, the wine feels caught up, not yet resolved.  One to review down the track, especially given Sottomayor’s comparison of 2001’s initial austerity with 2013.  I liked the 2001 very much…. 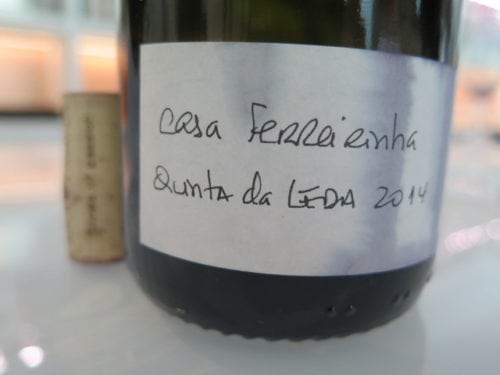 Vintage: Despite the harvest taking place during almost two weeks of rain, this added to the freshness, fine fruitiness and ample volume of the wines in the mouth.  The weather that was experienced during the maturation and the harvest affected the principal grape varieties differently. This favoured Tinta Roriz in particular. According to Luís Sottomayor, 2014 was the year for this variety, since it benefitted from a cool growing cycle with no heat spikes, which led to ideal conditions for maturation. Grape formation was uniform and the skin of this variety resisted the effects of rain to produce some great wines. On the other hand, the Touriga Franca variety, which prefers high temperatures and dry weather, was not at its best in this rainy season. Nevertheless, the wines made at the beginning of the 2014 harvest when there was no rain, are of good quality.

Tasting note: I spent a few days with Sottomayor visiting vineyards over the rainy 2014 harvest, including at Leda which, being in the Douro Superior, fared relatively well.  This wine is an inky deep hue, though one senses it perhaps doesn’t have the depth/fastness of colour as other vintages, so perhaps not the concentration to its blackcurranty fruit, though it has lovely freshness.  It’s early days so difficult (for me) to tell but, having just been bottled a month ago, Sottomayor reckons it needs time to come up.  Still, we agree it is certainly easier to understand than 2013.  With air it shows charming florals and succulent black cherry as well as currant fruit with a lick of cinnamon and an incipient iodine edge (a quality I often find in fruit from Leda) to its powdery tannins. Sottmayor suggests it is somewhere between 2011 and 2007 – without the structure of 2011, but with some structure and with the elegance of 2007.

As for the highly acclaimed 2015 vintage – for some a shoo-in Vintage Port year- Sottomayor remains undecided.  He reckons it is “much better” than 2012, 2013 and 2014, but thinks 2015 does not have the structure of 2011.  He will decide whether or not to declare a Vintage Port next January.