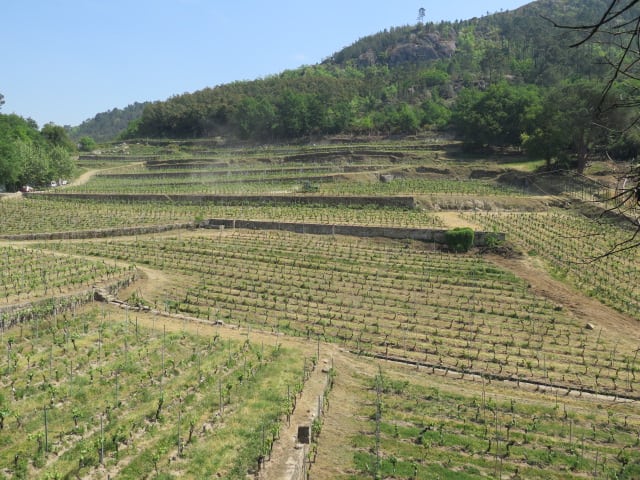 Today I head to the Douro with my Arblaster & Clarke Galicia, Vinho Verde, Douro tour clients.  But, since we left Rias Baixas, terraces have already become something of a theme.

In Vinho Verde’s Moncao e Melgaco sub-region, the Cerdeira family have planted two hectares of ungrafted Alvarinho in “patamares,” following the curves of the slope at Quinta de Folga near the winery, some of which is pé franco, i.e. without rootstock.  These shy yielding vines produce small berries and not a lot of bunches.  The quality is already good enough to make the cut for my favourite Alvarinho cuvee, Primeiras Vinhas. 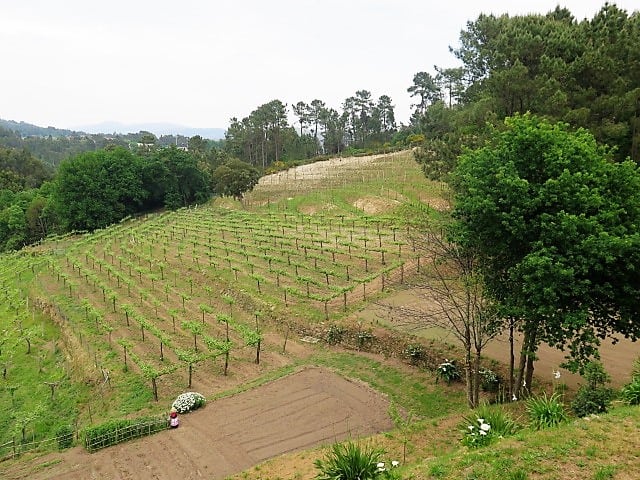 It was my first visit to Folga, which offers lunches by appointment.  I don’t eat meat, but everyone gave a massive thumbs up to the home smoked Bisaro pork which, I’m told, like the wines, had terrific depth of flavour.   Even for the non-meat eaters, it was a notably fine lunch.  Soalheiro do everything well.  More on the wines to follow, including the new Nature sulphur free release. 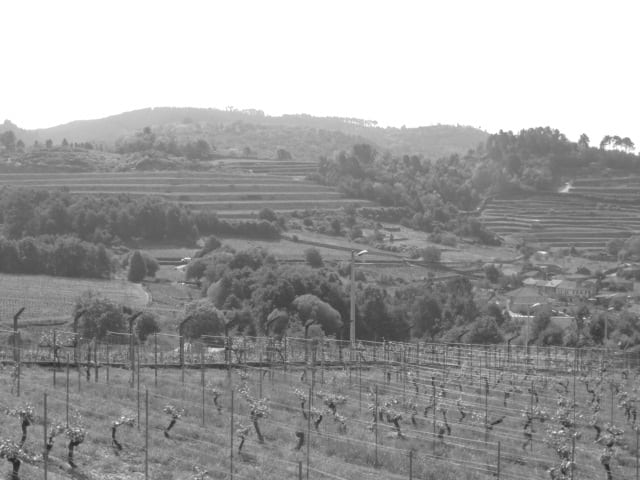 Our next stop was the Ribeiro region, specifically the Avia Valley, its classical heartland.  Looking at the terraces, walled, clos-like vineyards and the very many old houses which had cellars on the ground floor, it is immediately apparent that this is a wine region with a long tradition of quality winemaking. 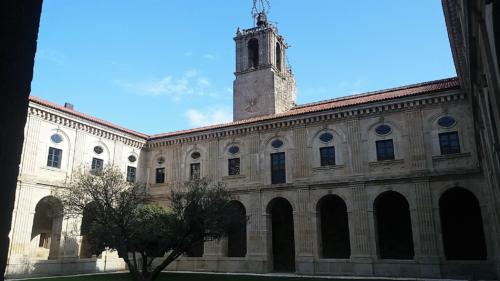 Back in the 12th century, the abbot of  Clodio Monastery (now a hotel where we stayed) documented the excellence of the Avia Valley’s wines according to Ferran Centelles’ ‘Ribeiro – A Delightful Surprise’ report of his first visit there last year for Jancis Robinson.  Well worth a read. 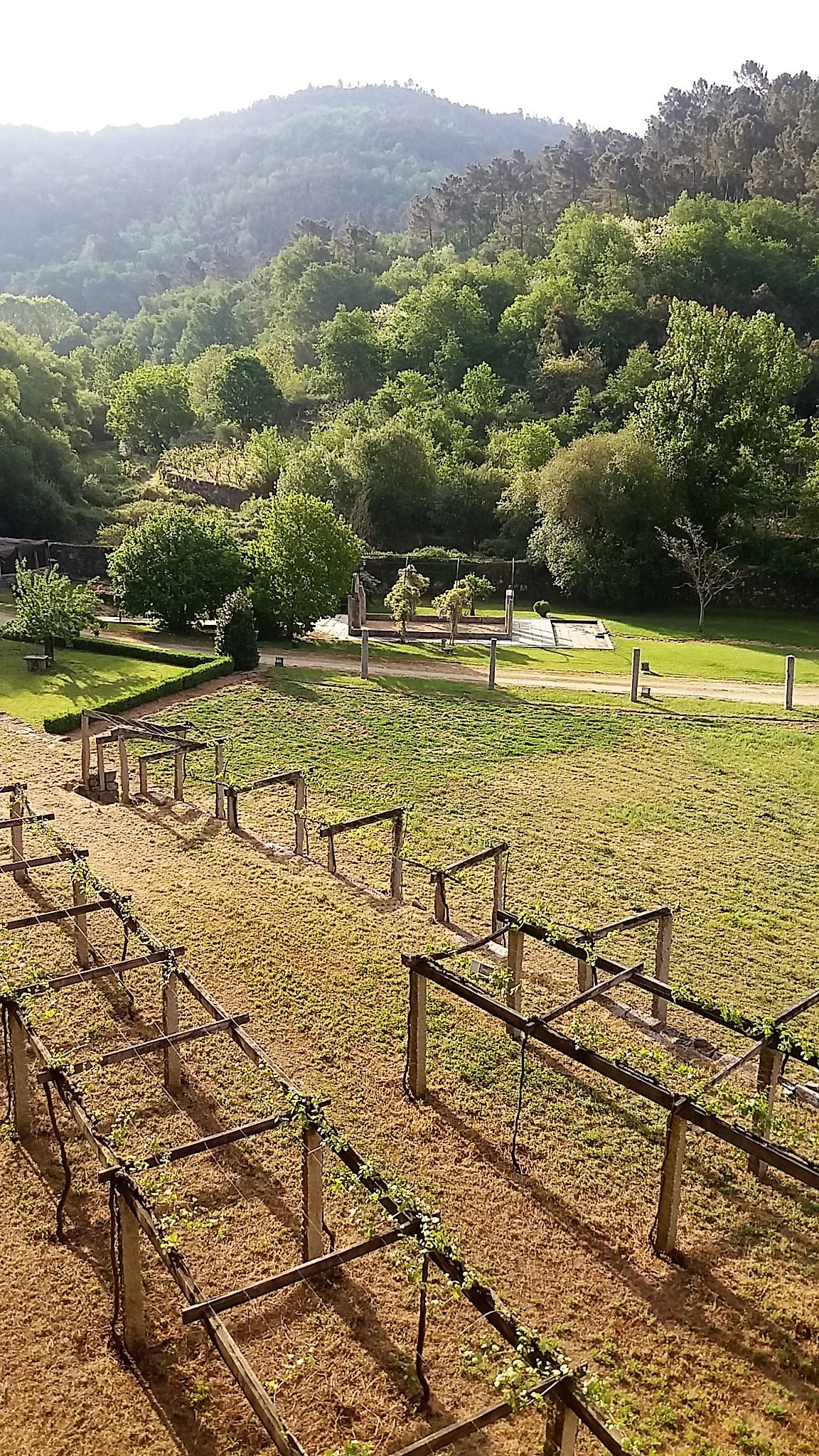 The monastary still has vines

Its a quality-focused tradition which leading producers like Coto do Gomariz and Vina Mein are reviving.  Thanks to the restoration of once neglected terraced vineyards and old native varieties, notably Treixadura, they are producing some particularly superlative mineral white blends (my top picks being Coto de Gomariz Finca O Figueiral 2015 and Vina Mein Tega do Sal 2015). 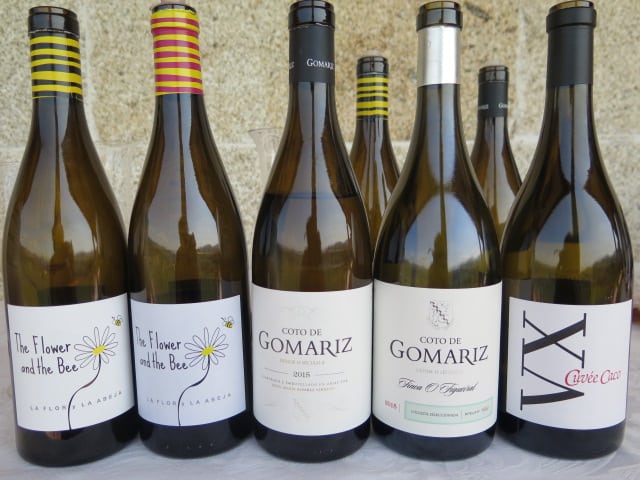 Inma Pazos of Coto de Gomariz confirmed that, like Burgundy (of which these two beautifully balanced, restrained wines are reminiscent) wines were known by their village of origin (like Gomariz, or Mein) back in the day.  Apparently, in its heyday (said Pazos), Ribeiro had 30,000 hectares of vines versus 3000ha today. 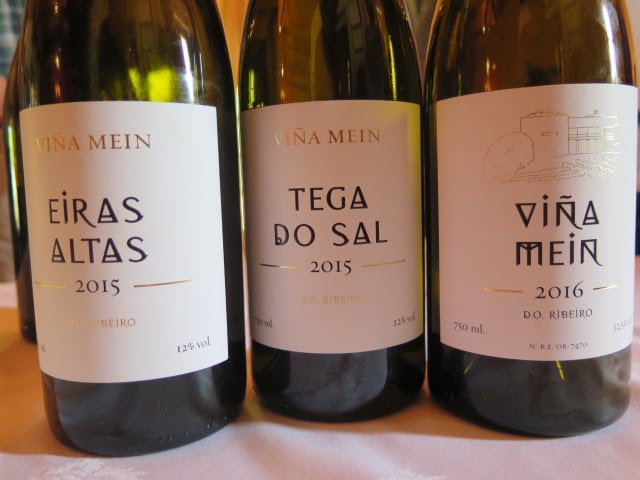 I’m also a fan of two single varietal Coto de Gomariz wines made under their Flower & the Bee label – an unoaked Treixadura and Souson red, to which I was introduced by my local Galician wine bar, Trangallan – a brilliant ambassador for the elegant wines of this region.  Coto de Gomariz & Flower & Bee wines are imported into the UK by Indigo Wines.

Vina Mein have recently released their first red.  It’s yet to be labelled but Vina Mein Tinto Atlantico 2015 is well worth watching out for.  It’s made by the renowned Comando G winemakers Daniel Landi and Fernando Garcia from Brancellao (Portugal’s Alvarelhão), Caino and Souson.  Vina Mein are not currently listed in the UK but are working with Desoutter & James who sell Spanish wines to the UK trade.