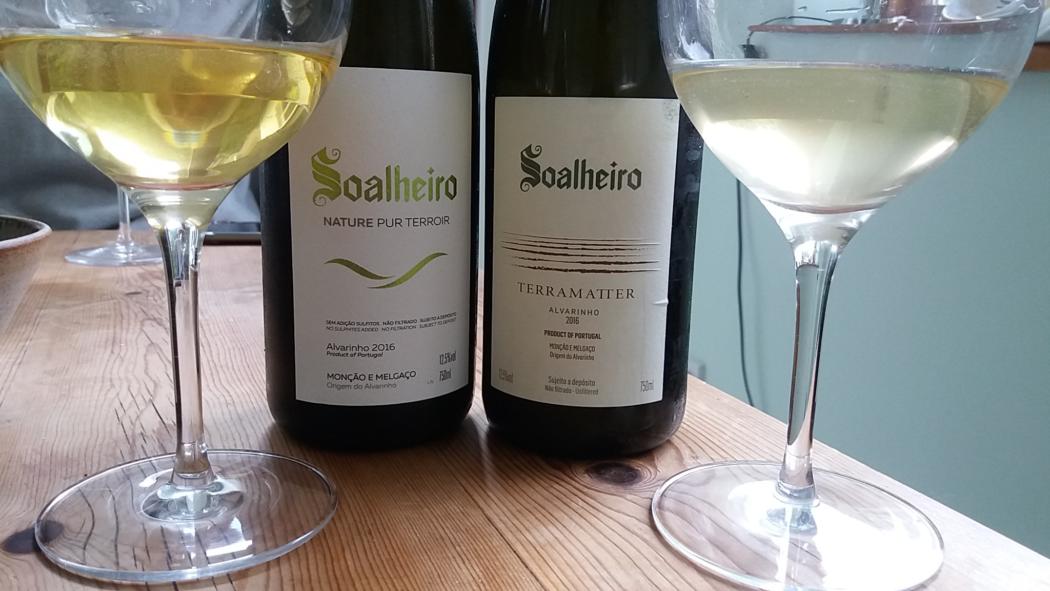 When I visited Quinta de Soalheiro in April, I had a sneak preview of the 2016 releases, including a new, pioneering Alvarinho – “Nature Pur Terroir” – with no added sulphur.  Portugal does not have many no-added sulphur wines, though quite a few producers now practise low sulphur regimes (indeed this is a tenet of Niepoort’s Nat’Cool range).

It requires great skill to pull off no sulphur additions and, for some (myself included), they are an acquired taste since sulphur is pretty handy for preserving those primary and secondary aromas and flavours which we typically associate with specific varieties or wine styles.  Of those mentioned, Antonio Madeira’s wine was my stand out because it retained the pronounced minerality, subtle vegetality and persistent acidity which spoke to me of Dão.  Qualities which, Madeira told me, he was anxious to preserve, by ensuring optimal storage and delivery conditions.

I have not tasted a shipped example of Madeira’s wine, but I have now tasted a shipped example of Soalheiro Nature Pur Terroir.  You’ll find my notes on it and Soalheiro’s other 2016 releases below.  Though each cuvee of Alvarinho was distinct, grapefruit peel/oil notes regularly popped up in my tasting notes.  Perhaps a signature of a year in which July, August and September were hot and very dry, with high average temperatures and practically no rainfall, contributing to an early harvest.

Quinta de Soalheiro wines are imported into the UK by Raymond Reynolds. Despite the polystyrene “snowfall,” 2016 was a hot year

With 45g/l of residual sugar but succulent, juicy acidity (7g/l), I’d describe this fruity Alvarinho as medium dry – mildly sweet. It has a gently rounded melange of stone fruits (think lychee, apricot and peach) and the palate is less linear than its stable mates, though a backbone of grapefruity acidity brings persistence and line.  It’s not always easy to find a slot for medium dry wines.  I reckon this has the fruit power to pair with punchy Thai-influenced canapes (the sweetness would counter-balance chilli well) or, forget sorbet and give it a whirl as a pre-dessert palate cleanser.  9%

A first bottle seemed a little ‘dank’.  Bursting with honeysuckle, honey even, juicy peach and lip-smacking grapefruit/grapefruit peel/oil notes to nose and palate, the second bottle fired on all cylinders.  This was the exuberant Primeiras Vinhas I recalled tasting with Luis Cerdeira in April alongside the more restrained 2015.  Both excellent, he agreed that they are very much in the mold of the 2007 (the more exuberant) and 2008 (the more restrained, and my favourite of these terrific back-to-back vintages).  And back to the 2016, it has delightfully  joyous persistence and intensity.  I like the way that those slightly bitter/sour grapefruit (green pineapple notes too) temper the whole.  A salivating palate-tickler.  13%  £20 at The Wine Society

It’s good to see that this cuvee of Alvarinho from higher parcels has earned its place.  Like the first, 2015 vintage, it has a distinctively textural, chalky (creamy almost) , slatey mineral finish.   A well-focused attack and mid-palate show classic citrus, peach and honeysuckle.  On day two, the citrus flavours seem more resolute, with great drive of pineapple and grapefruit – flesh, peel and oil. Great line and length.  With plenty to snag the attention, I suspect it will last well into the mid-term plus.  Granit is fermented in stainless steel tanks “with higher temperature than usual for white wines.” The bottling is made after a period of batonage and aging on fine lees.  12.5%

So this is the no-added sulphur Alvarinho which, I might add, is also out of the box for undergoing 100% malo and being un-filtered (so a touch cloudy).  It is, as you might expect, a deeper hue than Soalheiro’s other 2016s – golden yellow.  The nose is rich with complexity, showing bruised, creamy, buttered apples, bay leaf and a savoury, incipient nuttiness – the gentlest burnish or patina of ‘age,’ which adds enticing, mellow depth.  In the mouth, its mineral, dancing acidity puts me in mind of sandstone, meaning there’s a lightness (the glint of mica crystals) and textural (granular?) quality.  Though the fruit (grapefruit and bruised apple) is not as pronounced on the palate as it is on the nose, this is an undeniably complex Alvarinho thanks to the twin influences of oxidation and malolactic fermentation.  Personally, I’d have liked to experience a little more of the richness of the nose on the palate but, there and again, when I tasted it with Cerdeira in April, he told me that the aim is for it to be drier and less fruity than Terramatter.   So it hits the brief and, like Madeira’s wine, though out of the box, retains a sense of both variety and place.     Well done.  12.5%

Like, I suspect, Nature, this wine really comes into its own with food.  I showed the 2015 vintage at a Vinho Verde lunch I presented at Skylon in May.  My pairing with roasted corn fed chicken breast , broad beans, green asparagus, chicken skin (with zippy lemon zest and lemon juice ‘highlights’) was well received.  On the one hand, Terramatter 2016’s attack is intensely youthful, with vivid pink grapefruit and delicate bitter nuances of grapefruit peel and pith.  On the other, as it rounds out going through, it reveals the nutty, buttery notes and mouthfeel of a more mature wine thanks to part ageing in chesnut barrels and partial malo.  It sounds like a conundrum but, in the glass, this translates into an exciting, complex wine with a thoroughly engaging contrapuntal tension.  As the 2015 ably demonstrated, time in bottle allows these two elements to integrate without losing that connectivity to the fruit/acid line – the Vinho Verde nerve centre!  Great impetus, with push and pull dimension.  Loved it.  12.5%

Incidentally, over the hot (hurrah!) Bank Holiday weekend I fancied a lighter red and pulled out a bottle of Oppaco 2013 – Soalheiro’s first red Vinho Verde (VR Minho to be correct).  This blend of Vinhão and Alvarinho won plaudits for its combination of freshness and supple black cherry fruit, with a lick of cinnamon spice.  As I found on first taste (my 2015 review here), it is a super-polished wine, content to let the fruit and acidity, not the tannins, do the talking.  The Alvarinho is now better integrated, which puts the emphasis more squarely on the black fruits.  This is red Vinho Verde, but not as you know it and no less drinkable for that.  Indeed, quite the opposite for my pals!