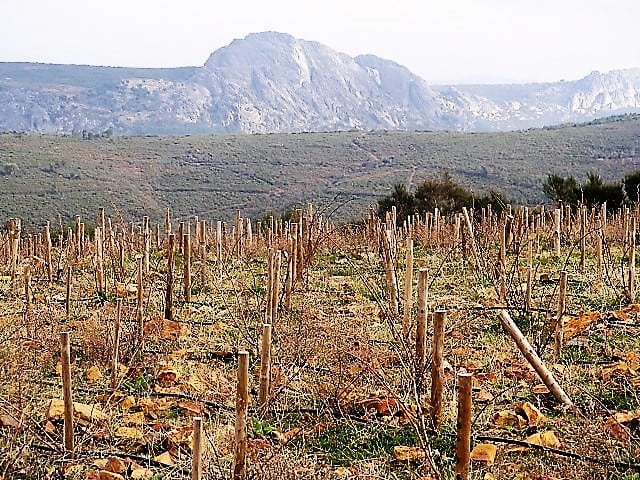 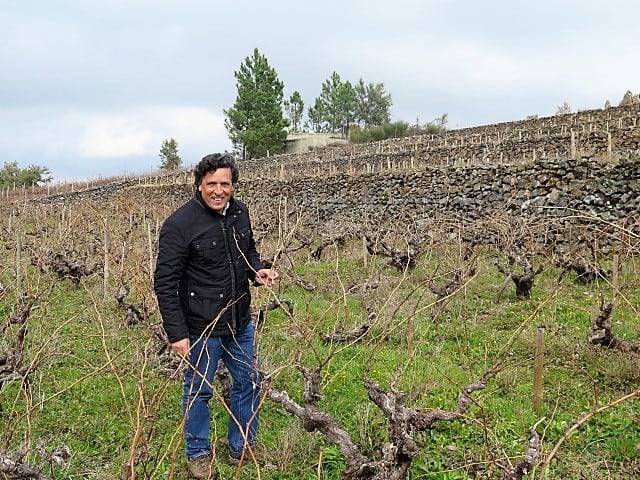 “The big change in the last 10 years in Portugal is whites,” says Rui Reguinga.  A change so unexpected that,  he admits, “when I first came to Portalegre, I made a big mistake.  I tasted individual grapes from field blend vineyards and could not see their potential, so I gave away the white grapes to the workers.  I just took the reds.”

It was only when he made a wine from a field blend of white varieties that he understand how the sum was most definitely greater than its parts.  When The Wine Society’s buyer Jo Locke MW visited and pronounced it terrific, Reguinga changed tack.  Today, white wines are a key player in his Portalegre-based Terrenus range.  And he is planting more white grapes at Vinha de Serra, high up in the Serra de São Mamede, overlooking Spain, where he plans to make a sparkling wine. 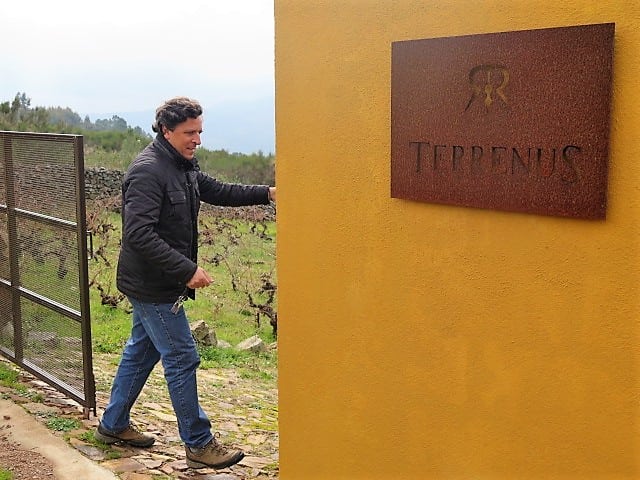 Entering a new era, as much focused on white wines as red at Terrenus

Reguinga’s Portalegre winemaking roots date back to 1991 when he worked as a consultant winemaker together with João Portugal Ramos at Consulvinus at the now defunct Adega Co-operativa de Portalegre (watch out for next Wednesday’s report on a mini-vertical), then at Tapado do Chaves.  He recalls that “Portalegre was like a desert back then – no-one went there.  No-one was trained in viticulture or winemaking.  The locals had just grown grapes or made wine for a long time.” 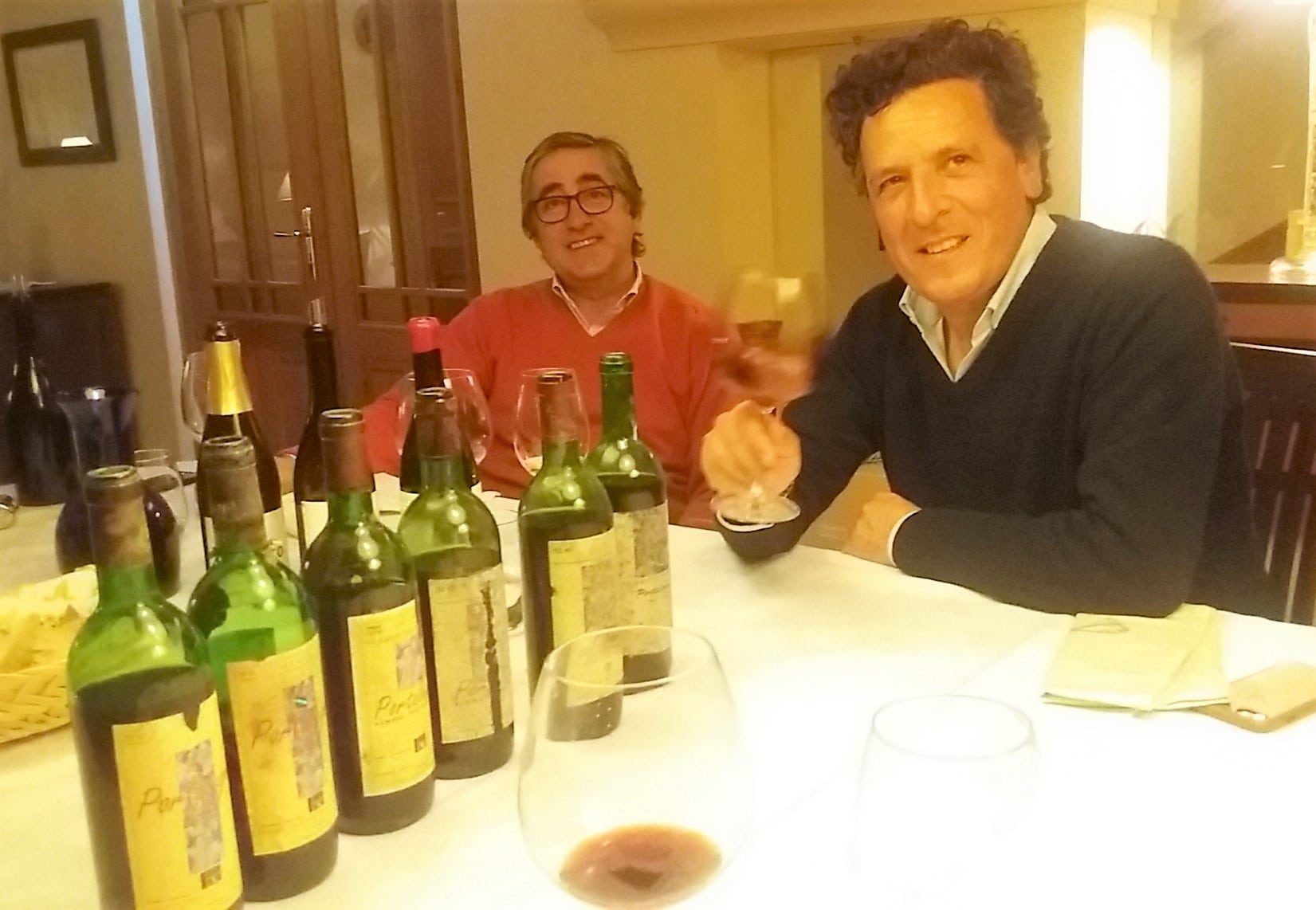 Back in the 90s, the co-operative was producing maybe half a million bottles a year; some members would roll up in an old car with just two bags of grapes.  Everyone grew something, indeed in the village of Reguengo alone, production came to some 25,000 litres.  Way more than today when, Reguinga estimates, Reguengo produces maybe 10,000 litres of wine tops. 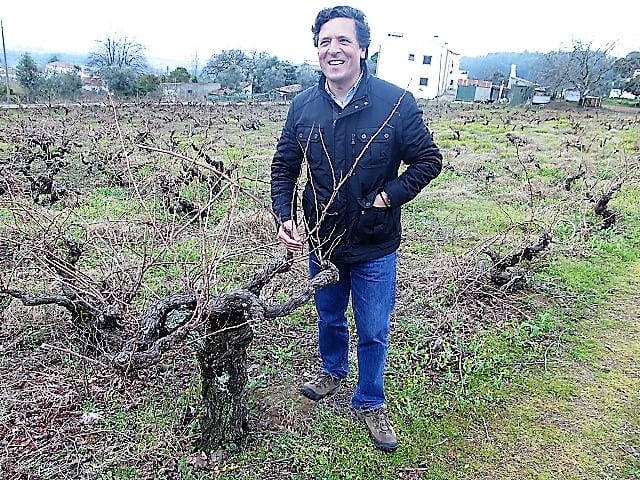 What changed?  Reguinga, who worked at the Co-operative until 1999, says that it paid well in those days and the wines sold well.  They were premium wines too – among the most expensive in Alentejo. Around the same price as Mouchão, he recalls. But that reputation was lost and the Co-operative struggled to pay growers.  Recently, the co-operative’s winery and its equipment was rented by a private enterprise who have contracted to buy grapes from its member/growers and use the Co-operative’s brands.  I didn’t taste any of the wines made under the new regime, but the latest vintages from the Co-operative (2013 and 2014 reds), did not impress; shame about the use of French varieties too. 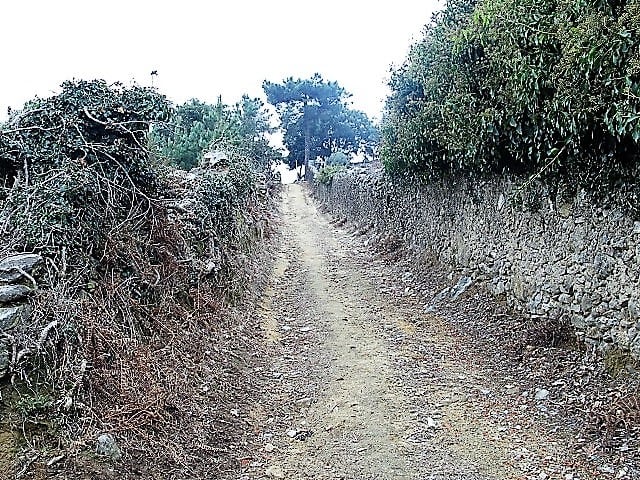 Reguinga established his own winemaking consultancy in 2000 and, in 2004, made his first Terrenus wine from tow vineyards in Reguengo.  Today, he has six vineyards totalling 12 hectares – three of which he owns, three rented.  As you can see from the contrasting pictures of these tracks which lead to two of his vineyards, the terroir varies significantly.  Reguengo (top), where you start to see oak trees (signifying an Atlantic climate), is at around 500m with granite soils.  Reguinga’s higher, cooler, wetter sites around Marvão and Porta Espada, which overlooks Spain are north-facing and on schist (below), with cherry and chesnut trees which, he says, you don’t see elsewhere in Alentejo.  One vineyard has some quartzite too.  These cooler sites ripen some two weeks later than those in Reguengo, while the winemaker reports schist soils (which retain water and heat both) produce more concentrated, riper wines. 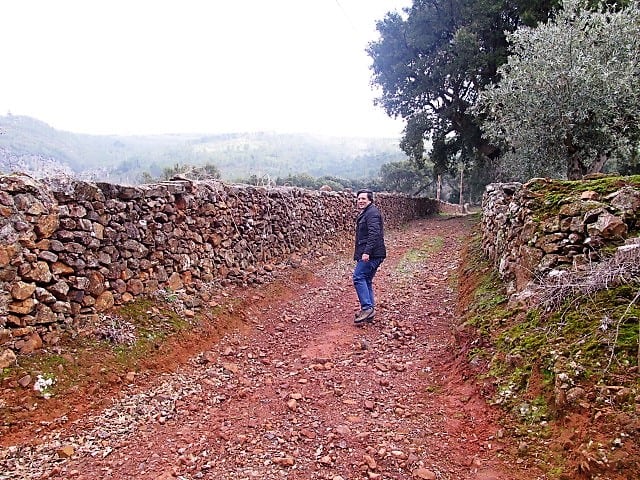 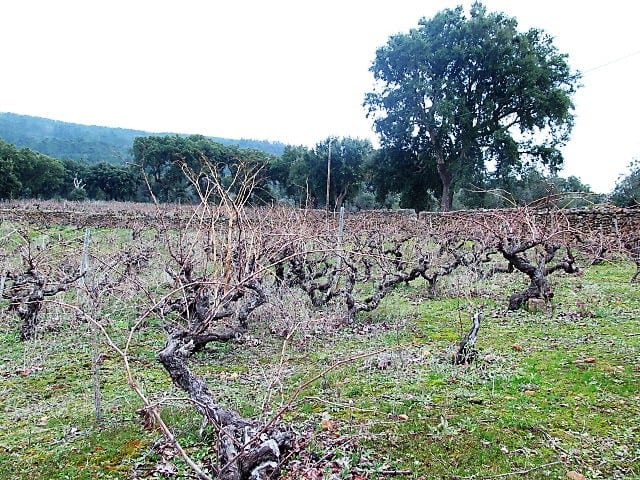 Confirming what the Rosa Santos family (Explicit Wines) told me about the region’s increasing popularity, Reguinga must feel pleased that he got in early.  He shares their concern about grapes disappearing into multi-sub-regional Alentejo blends when, he observes “with just a few other grapes, you lose the natural character of the Portalegre region.”  But overall, he is happy more people are coming here because “it is a chance for Portalegre to become better known and for more and more wines to be made from here.”

Reguinga acquired the Porta Espada vineyard overlooking Spain (above) in 2010.  Planted 20 years ago, it is north-facing and, at 740m, “very difficult” for ripening Aragones, Alicante Bouschet and Trincadeira.  But the freshness is useful for the regular Terrenus red.  The winemaker has planted more white varieties for his entry-level Terrunus white, including Bical, Fernao Pires, Roupeiro, Malvasia Fina and Arinto – all with cuttings from his old vineyard on the opposite slope overlooking Portugal (pictured below).   In this new vineyard he planted an experimental vineyard (0.2ha) in 2015, which is earmarked for sparkling wine trials (following in the tradition of the Le Coq family, who made sparkling wine in Portalegre in the 19th century). 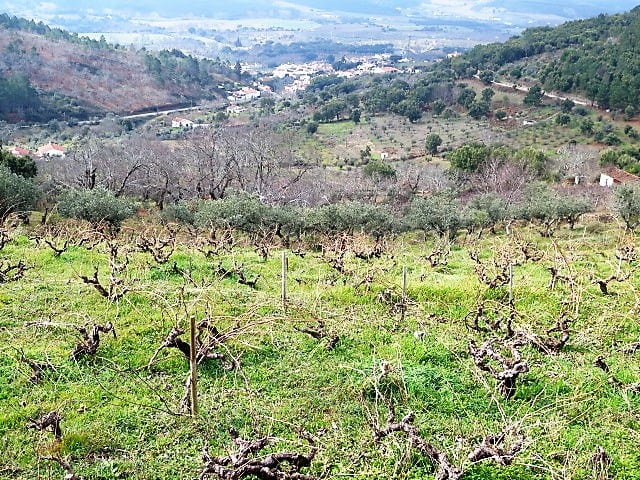 The old terraced vines, which Reguinga bought in 2005 (his first acquisition), are over 100 years old and go into Terrenus Vinhas Velha cuvees.  The white grapes, which have “fantastically high” acidity are typically harvested in September and the reds very often into October.  This year, to preserve these old vines as best he can, Reguinga will start to tend them biodynamically, with consultancy from Joao Castella. 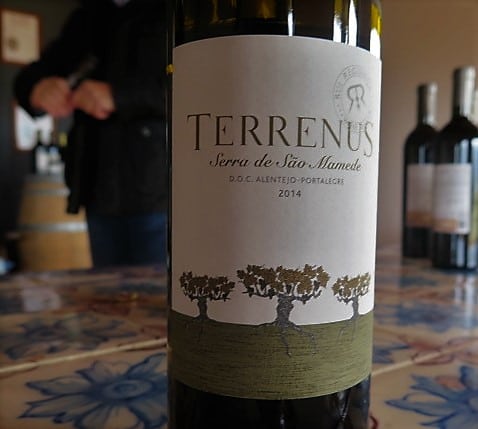 The entry-level wine comes from 4-5 different vineyards and several different grape varieties.  It has persistent grapey, fresh fruit with apricot and a salty edge. The grapes are co-fermented and 40% is aged in second and third use 500l French oak barrels, the balance in stainless steel.  This is the only wine which Reguinga inoculates.  Not for aromatics but just to ensure it ferments to dryness (it is made in higher volumes).  Very good – fresh, firm, good drive and character.  Just what I look for from Portalegre.  13% 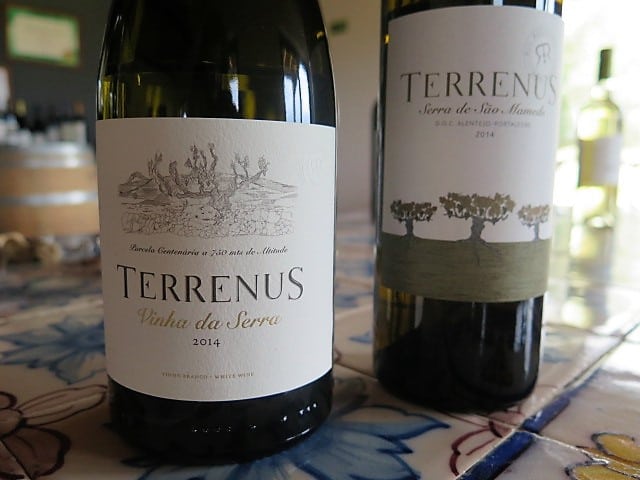 From the highest, terraced vineyard this has the sappy, mouth-watering acidity of a Loire Sauvignon, which saturates the palate from tip to toe rather than driving it.  A more porous acidity if you like.  It brilliantly animates this wines cusp-of-ripeness stone fruit and ripe lemon.  There’s a hint of kernel and a hint of resin for interest.  Very good.  Great line and length.  A powerful wine.  13.5% 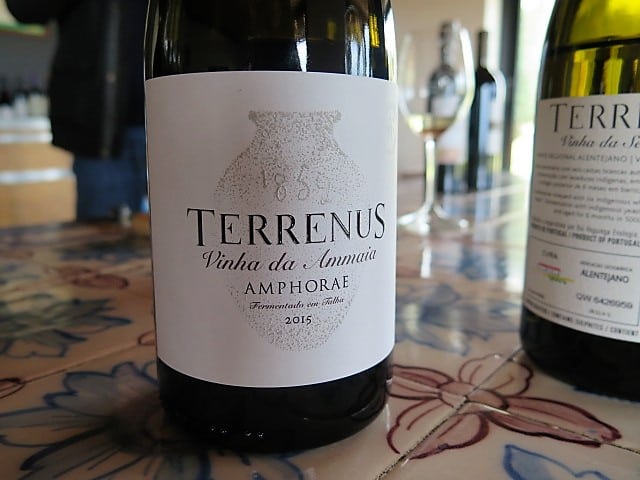 This, Reguinga’s first talha/amphora-fermented red, comes from Vinha da Ammaia at 600m in the village of Marvão on schist and clay.  It is a blend of  Trincadeira and Castelão from 30 year old vines. Vinha da Ammaia (naturally) fermented for two months in a 1500l amphora, which was made in 1859 (pictured below). Following fermentation it was transferred to two new 500l amphorae (also pictured below).  This is an exciting wine, with an inky, floral nose with a hint of iodine powder/dust (which Reguinga observes is very much the smell of a new/freshly lined amphora).  In the mouth it is very fresh and floral, with fine tannins, which make for a very attractive fluidity.  Hints of tobacco, leather, dust/iodine and pine needle lend complexity and lift to its fresh berry and dried fig fruit.  Very good.  13.5% 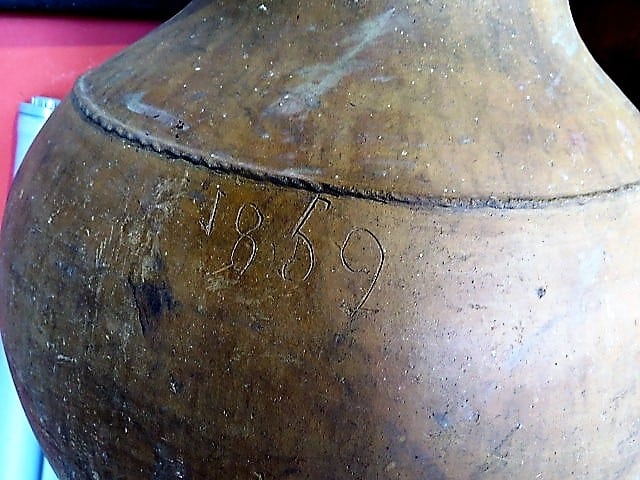 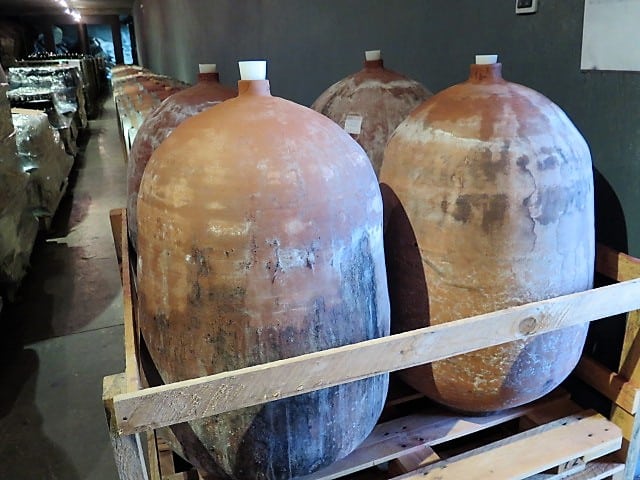 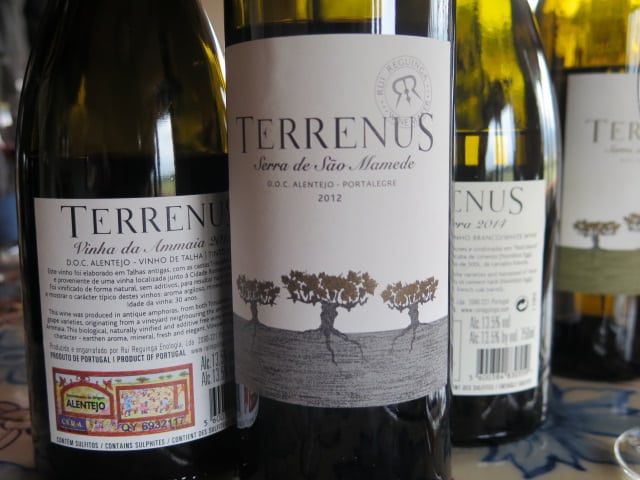 I selected the 2007 vintage among my 50 Great Portuguese Wines in 2010.  This vintage is from a blend of four younger vineyards, with vines ranging from around 20-40 years old.  A fleshy but fresh red with sweet dried fig, bruised/woolly plum (not too sweet, a little bitter), pippy, lively berry and currant fruit going through and a hint of balsamic. The tannins are a spicy, grainy presence; a touch picky too.  Interesting (in a good way) flavours and textures distinguish it from the modern fruit forward brigade.  For Reguinga, “I don’t want to make a wine that is too perfect….boring.”  It was aged for 14 months in used oak barrels.  Good.  14% 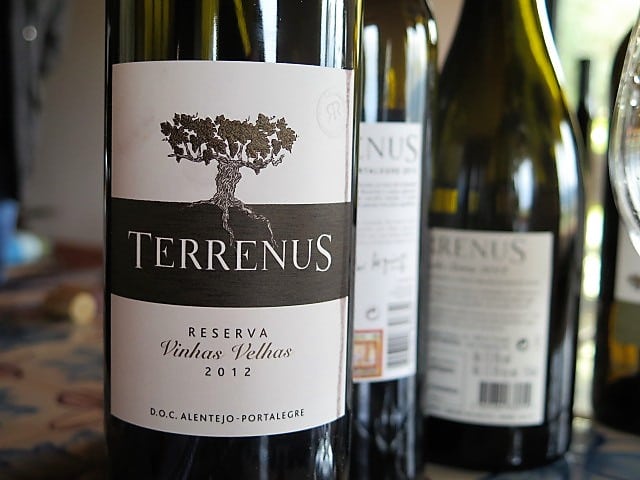 Sourced exclusively from old vines at a tighter, higher band width – 600-700m above sea level.  An inky, deep hue with fine striated, pithy tannins which infiltrate this wine – spicy and mouth-coating.  Game and peony florals lend savour and lift – wild perfume – to its dark plum and blackberry fruit.  The acidity is crunchy and mineral.  Strikingly old fashioned, again in a good way.  A wine with plenty of character and structure.  It was aged for 18-20 months in a combination of new and used French oak.  Then aged in bottle for at least a year.  And it will benefit from a few years yet in bottle for the tannins to mellow.  Very good. Lots of potential. 14% 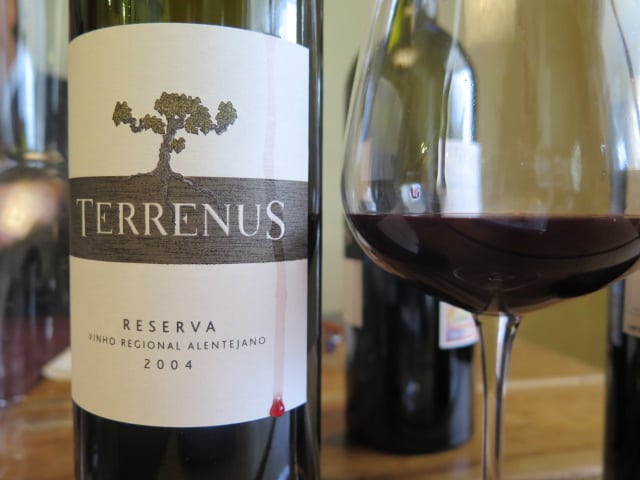 As if to reinforce the last comment, Reguinga brought an older vintage along.  It showed off this wine’s ageing potential rather well.  As you can see, it is still a deep bright hue.  Plus the 2004 still retained terrific intensity of flavour to its plum and wild berry fruit.  While the oak (100% new oak back then, 14 months) gives this wine an amplitude and richness/sweetness, the essence of the wine is brilliantly captured by its lovely nose of spice, balsamic, eucalpy and pine resin.  The 2004 Vinhas Velhas has a delicious wildness about it  – a palpable sense of the surrounding countryside/country air (and I guess it helped having spent a day or two there by this stage).  Fantastic freshness and a ripe but present underlay of fine tannins suggest it has a long way to go yet.  Be fun to look at this again in five years, then 10 years….Incidentally, interesting to note that this wine was labelled Vinho Regional Alentejano.  The fact that Reguinga now labels his wines DOC Alentejo-Portalegre is an indication of the growing currency of this exciting sub-region. 14%