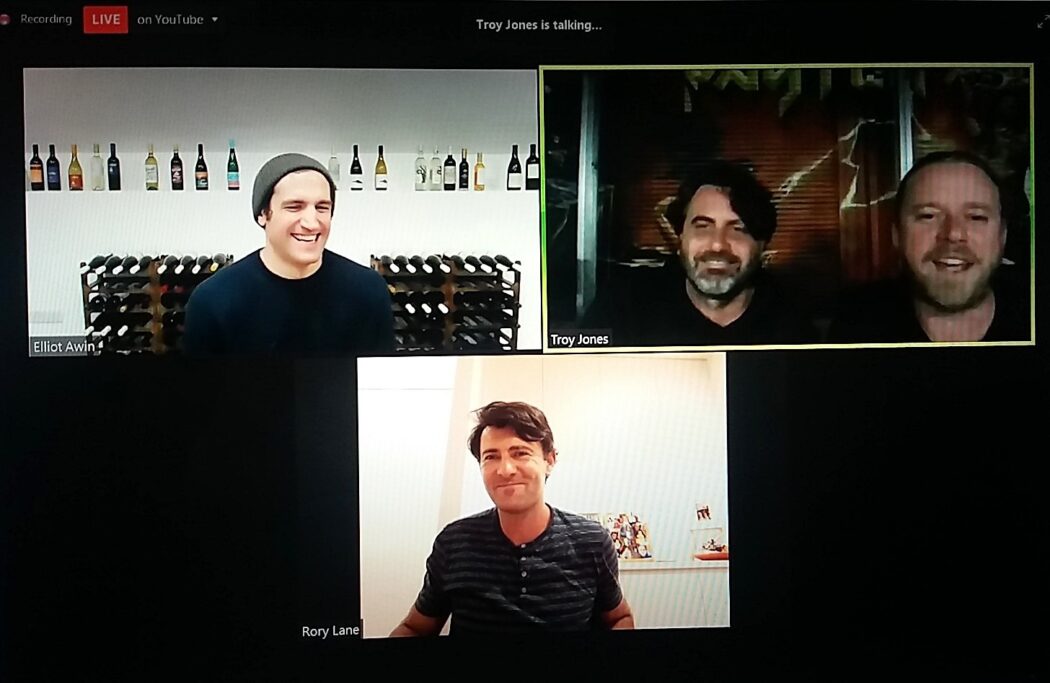 Never mind the buzzwords: Payten & Jones and The Story Wines 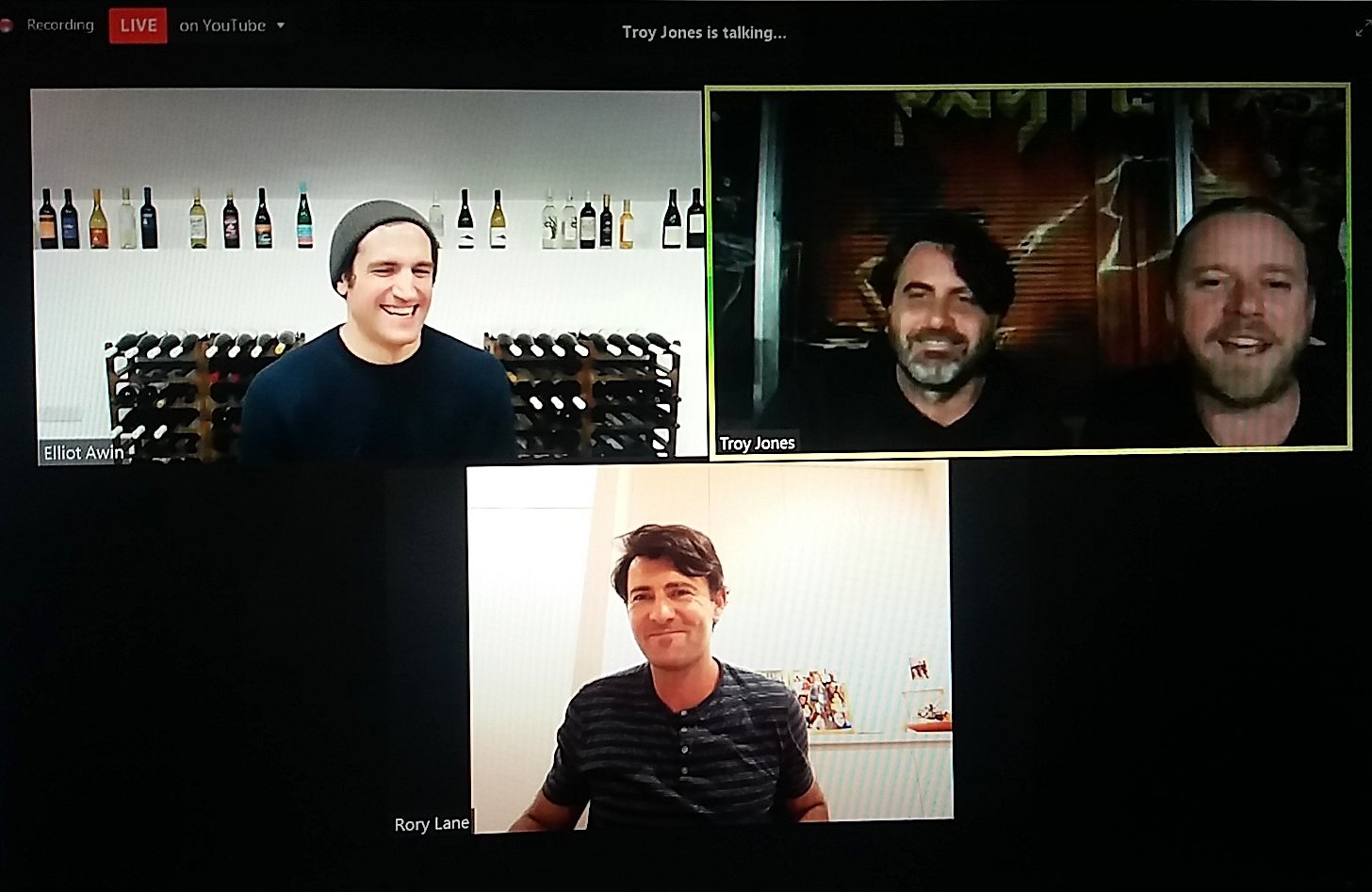 In 2015, the importer launched its ‘Australia’s Best Kept Secrets’ initiative.  It focuses on premium wines from boutique, family-owned wineries with an annual production of less than 10,000 cases.  Wineries which are not such best kept secrets these days!

The first producer-focused webinar (which you can watch here) showcased five wines from two Victoria winemaker/patron labels. Rory Lane established The Story Wines/R. Lane Vintners in 2004.  Based in Melbourne, he sources grapes quite widely within western Victoria, but principally from the Grampians and Henty.  In eastern Victoria, Behn Payten & Troy Jones founded their Yarra Valley-focused Payten & Jones label in 2007.

We cross-pollinate with sommeliers

From the outset, the trio have made minimal intervention wines and wines to drink with food – “part of our DNA,” said Lane.  “We cross-pollinate” with sommeliers, agreed Payten, with a big symbiotic relationship with restaurants about what’s in season and what’s of interest.

Take Lane’s Marsanne/Roussanne/Viognier, which was a direct response to the lack of super-textural, low acid whites.  Skin contact whites have met that brief too.  Jones mentioned an orange Verdelho which sold like hotcakes.  With fresher styles and less oak, they can release a wine in 6-8 months and hit the summer frenzy, he said.

“Never set in our ways and how we make the wines,” for Payten, the Yarra Valley has shifted away from emulating Bordeaux and Burgundy over last 20 years.  Diverging significantly, individual styles have developed and, he reckons, every year, more and more changes reflect our personalities and where they are from.

Speaking about his evolution, Lane likes whole bunch ferments for freshness and aromatics – “a lightness,” especially in warmer years.  However, likening it to the pendulum swing of Australian Chardonnay, having put the whole into (100%) whole bunch ferments, he has backed off a bit since 2017.  Whilst it was a cooler year, he also wants to “represent [less herbaceous] skin tannin a bit more.”

Unfiltered – like the difference between seeing a band live, or it being produced on Spotify 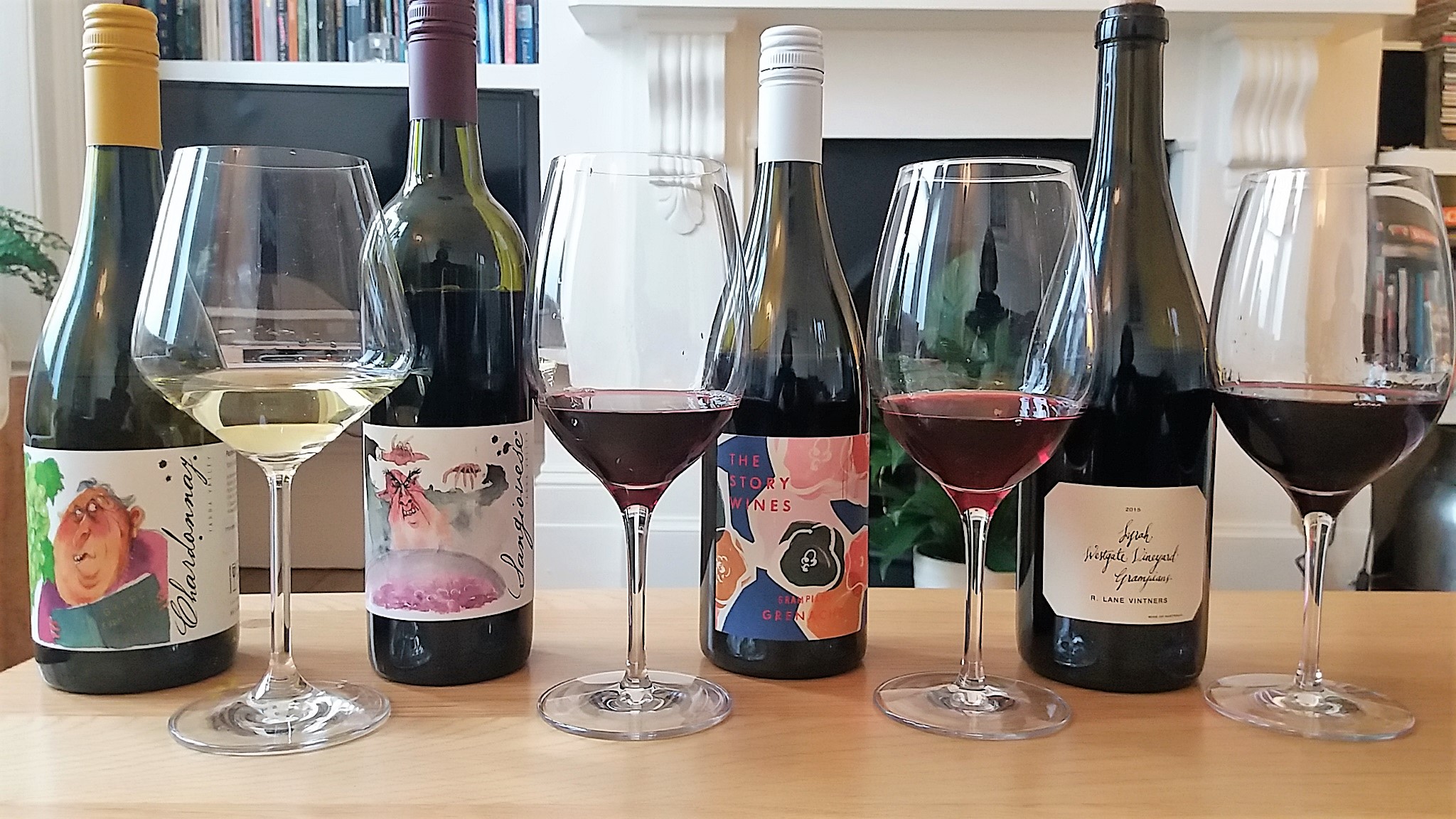 For both labels, bottling unfiltered is key to the preservation of personality.  It’s “like the difference between seeing a band live, or it being produced on Spotify,” contended Jones.  Continuing the music analogy, the winemaker added, “we hate using sulphur during maturation – it’s like pressing pause on the way a wine develops – wines develop through oxygen and mostly oxygen helps them mature.  With some wines, even into bottle.”

Whilst making fresh and ‘smashable’ (“delicious booze,” said Jones) is now fashionable in Melbourne from big retail down, the respect for ground and grape stands out in The Story’s and Payton & Jones’ wines.  These are also serious wines.

Textural, subtle layers of interest reflect deft use of malolactic-fermentation (the Chardonnay) and whole bunch for the reds.  Layers with levity, thanks to their freshness, gentle extraction and old oak.  Eminently broachable as they are, the wines really shone on day two.  Don’t be afraid to give them some air.

An over-arching awareness of sustainability

As for minimal intervention in the vineyards, Payten reported that there is “an over-arching awareness of sustainability and folk are trying to do the right thing.”  Which does not necessarily mean following organic and biodynamic practices, he added.

Payten & Jones (who own select vineyards) are moving to biological farming, using beneficial predatory insects and scientifically proven teas and brews with beneficial bacteria to improve soil health.  They are steering away from copper use, which builds up in the soils and they are using less water.

Concurring, for Lane (who works with long-standing growers), doing the right thing by the soil makes it easier to make better wine.  Getting more organic matter into the soil means it is likely to hold more water, “one of biggest problems we face.”

A reductive, struck match ‘ping’ to the tightly wound nose suggested that this might be a lean style.  Whilst struck match follows through in the mouth, with suggestions of melon, ripe pink grapefruit, lime and a hint of white peach on day two, it is rounder than I expected, having undergone 100% malolactic fermentation and some lees stirring.  Yet early-picked and 50:50 fermented and aged in barriques and stainless steel, it remains fresh, with a textural chalky finish and gently persistent, ripe, lemony acidity.  I liked its ‘open-faced’ limpid palate very much. Hails from the Yarra Glen sub-region in the Lower Yarra Valley.  12.5%  £23.60, Pull the Cork, Christopher Piper Wines, Grape & Grain, Salusbury Winestore, Honest Grapes

Sangiovese can tend to strident acidity and tannin. Intense, yet yielding (in the Sangiovese scheme of things) this has a relaxed, not trying too hard vibe about it.  One which reflects the “makes itself” winemaking process.  Every year, said Payten, “we pick on flavour and get tannin flavour and ripeness.”  The work is done in the vineyard (crop reduction/pruning to the season etc), which is located in the Gruyere sub-region in the (warmer) Lower Yarra Valley.  Like classic Yarra Valley Cabernet Sauvignon, this Sangiovese features mouthcoating but soft, immersive tannins, so it cleaves close to the palate (think sour plum, close to the plum skin).  Inflected with lavender, sweet coltsfoot and clove, juicy but well-defined plum and blackberry flavours permeate the medium-bodied palate.    Dry in flavour profile, but vibrant, it was whole berry fermented, then aged in old oak.  As a result of phylloxera outbreaks, parts of the Yarra have been planted afresh. I enquired if more Mediterranean varieties were popping up.  Jones reckons Gamay has been the main beneficiary, with a little Grenache and Sangiovese in the Lower Yarra.  Pinot Noir remains ascendant in cooler spots (the Upper Yarra).  13.5%  £23.60, Cru Wines, Noble Grape, Pull the Cork, Wines Direct Sussex

The variety is marginal in the Grampians; Lane reckons it simply would not have ripened 20 years ago.  However, with climate change in mind, the Grenache lover persuaded a grower to plant South Australian Heritage clones at the Dakis Vineyard.  It is a lower elevation (280m), warmer site on a gentle north-easterly facing slope just south of Great Western (Shiraz vineyards are typically at 300-350m). This, the first release from a cooler year, has a pronounced ruffle of dried herbs to the nose, with sweet blood plum, red cherry and a hint of angostura bitters.  In the mouth, it is markedly spicy, with clove, anise, liquorice and tea tree notes to its ripe red fruit.  The riper/plumper seeming Shiraz component (8%) seems more evident on day one.  On day two, the spices have unfurled and the tea tree notes blown off, bringing the sappy red cherry and berry fruit to the fore.  It seems more citrussy too, with orange blossom and zest going through.  Just as new wave Grenache from McLaren Vale and the Barossa has been dubbed ‘warm climate Pinot Noir,’ Lane calls it ‘Grampians Pinot Noir.’  Whilst it may come from a warmer part of the Grampians, with a cooler climate than McLaren Vale or the Barossa, I suspect hang times are longer.  It is quite different from South Australian examples, rounder, softer, with juicier acidity – less ‘crunchy.’ And with lower alcohol than you commonly find there.  With its dried herbs, orange zest and red fruits, it will appeal to the Negroni lover. The grapes were destemmed and, following a three week fermentation on skins (which gives a lick of tannin), it was matured in a single, 1000lt old oak vat. No fining or filtration.  13% £28.15, Pull The Cork, The Wine Reserve, The Vintner, Winecroft Ltd, Ex-Cellars

Lane showed The Story “Once upon a Clime” Syrah 2015 in the webinar.  I was far from dismayed to receive an upgrade thanks to a delivery error. Lane bottles the cream of his Grampians’ crop under his eponymous top tier label.  This Syrah comes from his premier Grampians grape source, the Westgate Vineyard.  Planted in 1969 in the hills south of Great Western, the vines yielded a meagre tonne and a bit per acre in 2015, accounting for the deep, inky hue and intensity of this Syrah.   Adopting the French moniker, it is emphatically savoury, with an edgy, sinewy rawness about it (tannin and acidity), suggesting a long life ahead.  It reveals liquorice, clove and earth to the nose.  A hint of malt/baking spices too.  In the mouth, it is intensely savoury, with smoky, spicy layers and the region’s signature meaty, cracked black pepper. With air, violets.   Brooding but frisky, fresh,  juicy blackberry, wilder bramble and sloe fruit make for a persistent palate, with staccato, scattergun shots of black pepper which follow through, in retro-nasal rasps.  Brawny, hugely engaging and persistent, with graphite and Mighty Imp spicy, menthol liquorice and graphite to the finish.  Terrific.  Averaging 60% whole bunch, Lane split the harvest into 3 batches – some destemmed, some with a small percentage of whole bunches and then a smaller amount fermented as all whole bunches. Each naturally fermented batch matured for twelve months in barrel (a mixture of French puncheons and barriques, 20% new).  The final wine – a ‘best barrels’ selection – was blended and held in tank for a further four months. Bottled with no fining or filtration.  14% £51.75 RRP Stockists: South Down Cellars, Vin Neuf, The Wine Reserve, Ex-Cellars