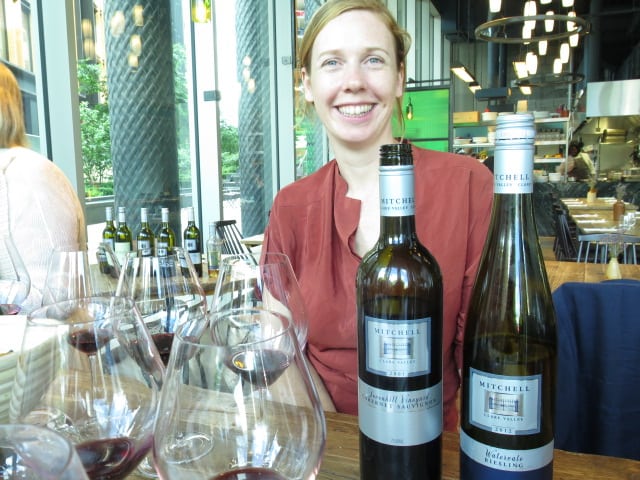 Andrew Mitchell has been making Riesling in the Clare Valley for 40 years. These days he has a helping hand from his eldest daughter, Hilary (pictured), who showed off a vertical on her recent visit to London.

The former designer for Spain’s uber colourful Desigual label is happy to stick with the region’s classical bone dry style.  I say classical but her father introduced a couple of twists.  Mitchell Rieslings are naturally fermented and lees aged for six months.   Andrew Mitchell dropped me a line after the tasting to explain “[A]s I wine student I was taught to remove young wines from the yeast lees as soon as possible to preserve the fresh varietal fruit flavours, but soon found from experience that wine left in contact with lees had better ageing capacity. I also like the fuller texture that one gets with the appropriate time on lees.”  He added time on lees varies a lot from year to year – “every year the wines have different flavours and different structure so they need somewhat different treatments.”

It certainly makes for a relatively muscular style for Riesling.  It’s as if one experiences the flavour and weight of the whole lime – juice, flesh, pith and peel.  And you know how firm limes are.  Plus I found Germanic hops and Alsatian spice/mouthfeel notes in latter vintages of this wine (2010/11 onwards), albeit much more restrained than in their European counterparts.

All the fruit comes from the Alcatraz vineyard which is located at around 350m on classic Watervale red loam over limestone with some over dolomite.  The 50 plus years’ old vines are dry-farmed and organically tended.  Mitchell senior told me “[W]e have not pursued certification. We operate our vineyards in the same way that they were worked before chemical agriculture was introduced. We briefly used chemical weed control in the 1980’s but very quickly observed the deterioration in the soil structure and reverted to mechanical weed control. In Clare it is generally dry during the growing season so there is very little disease pressure and in most years the vines do not need spraying. However in an El nina year (like 2011) I would have no hesitation in giving the vines a protective spray of copper &/or sulphur.”

Hilary showed us some mature ‘extras’ too, including the McNichol Riesling, which is aged in old oak barrels.  First made in 2005, it comes from a more elevated, steep vineyard at 450m in Penwortham.  The vines are planted on sandy loam over siltstone rich in quartzite . McNichol is released with several years’ bottle age.  I found the oak of the 2008 McNichol still a little too pronounced, especially next to the 2008 Watervale.

Clearly I’m a Watervale purist!  And why not.  At around £12 a bottle the Alcatraz is a real steal for a wine of such structure, intensity and complexity.  And so it is for many an Australian dry Riesling; Semillon too.  I’ll be writing up the Semillon separately – Clare Valley has some lovely examples and Mitchell’s is one of them. 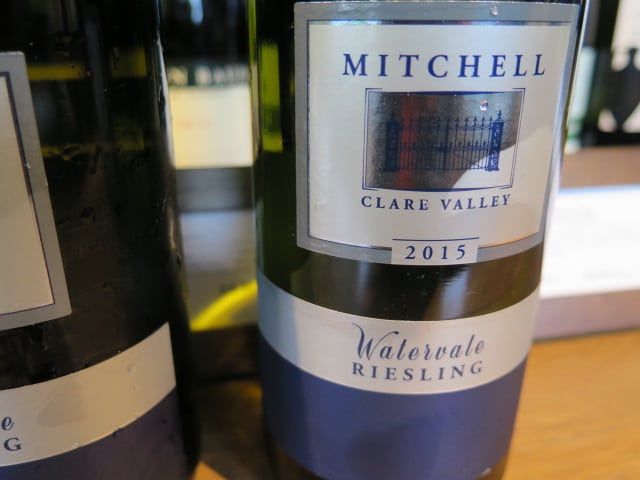 Tightly coiled, very mineral and structured, yet has marked palate presence.  With lots of mouthfeel, it seems relatively broad shouldered – muscular next to the prettier 2014.  It has an unusual lingering floral/hops/spice note to lime and grapefruit nose and palate.  Great length.  Exudes power/energy; very young. 13.5%

Very exotic and expressive with pretty mandarin and that edge of bitter/green edge of hops to the nose.  These notes follow through on a complex, lively palate with lime, camomile, a touch of earth and spicy clove.  The palate is a little softer than the ’15, but very persistent with a long, slow burn finish.  Very good. £11.95 at Tanners (who also stock the lovely Semillon 2009 for the same price) and £12.99 (or £11.50/bottle if you buy a case of 12) at The Wine Company, Colchester. 13%

Another exotic, expressive example, this time with anise, lychee and ginger notes to its juicy, succulent palate. The finish has a distinct quinine G&T mineral/citrus resonance.  Where’s my sushi?  13%  £11.80 at Slurp, £11.99 at Fraziers, £12.49 at House of Townend. 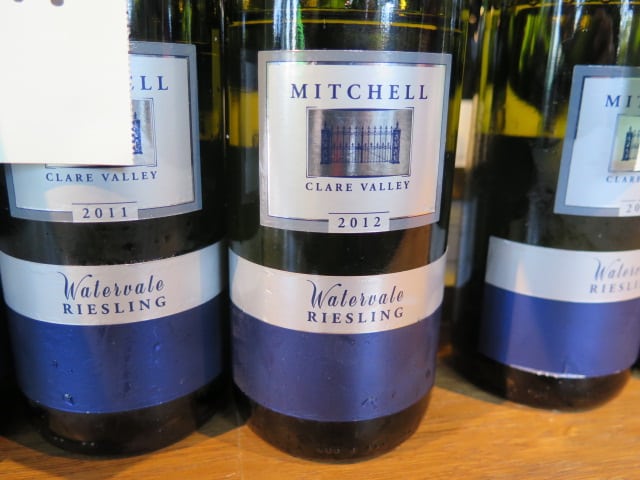 Another favourite and another conundrum.  While the 2015 was tightly coiled yet relatively broad-shouldered, the 2012 is very closed yet very complex.  It tantalises your palate with flick of the wrist kaleidoscopic flashes of aromas and flavours – camomile, aniseed, ginger, lemon thyme, lychee, hops and minerals.  Being very well structured, there’s plenty of time to reveal more.  Really distinctive, really good.  13%

A difficult year and this lacks a bit of conviction.  Rain may not have stopped play but it seems to have affected it.  This wine lacks a bit of concentration and doesn’t have the pristine core of fruit of the others. It’s showing tertiary honeyed notes, the camomile is quite pronounced and there’s a touch of earthiness on the palate.  13%

Another tightly coiled Riesling with breadth á la 2015. Sorry for the confusing notes.  Let me try and explain this tangy tongue twister.  Slippery lip-smacking lemony fruit – flesh and salty skin – are the nip and tuck pull.  While chiselled and chalky minerals are the push, giving this wine a sense of dimension.  Really mineral with lots of mouthfeel.  Very good.  13%

Quite tight and mineral with a real twist of lime and lemon – seems to wear its fruit more overtly than later vintages. With good depth and length going through, this is a powerful Riesling with firm, steely grapefruit to the finish.  Very good. 13% 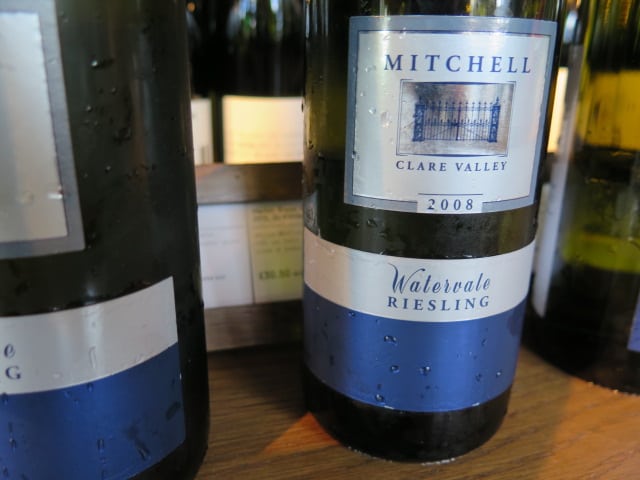 The double whammy drought/frost low yielding year.  This is a relatively broad style, with a sweet, exotic tangerine/pink grapefruit accent to its citrus fruit.   The alcohol pokes through, giving some warmth to the finish.  Not a keeper.  Drink up.  13.5%

Although this also weighs in at 13.5%, the 2006 is a world apart from the 2007.  Though it is showing some tertiary waxiness of texture and sweetness – lemon and lime shred – it retains energy and line.  Really classic expression, with a pronounced undertow of quinine minerality to the persistent finish.  Lovely.  13.5%

Very much in the style of the 2006 but seems a touch more lifted and cooler of delivery.  Very expressive nose and palate with lemon and lime shred, spicy citrus pith, minerals and a grapefruity, mineral acid undertow.  A hint of nuttiness to the finish gives its age away.  Very good. 13% 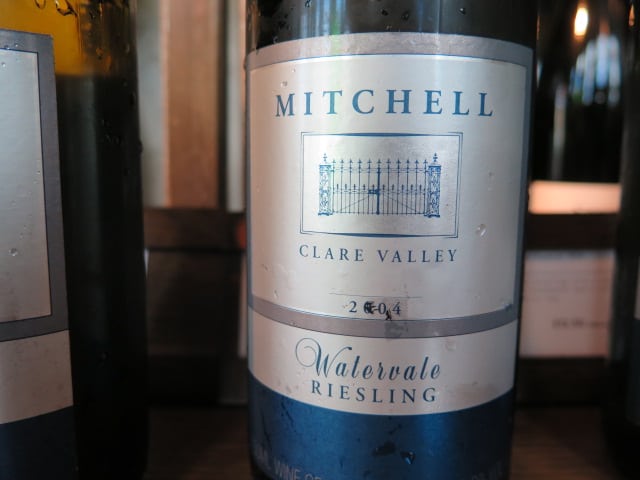 This is a Clare Riesling vintage which I liked very much when I was down under for a Riesling focused trip in 2008.  I can still see why.  This is a beautifully structured Riesling, still firm, with lime, musky florals, talc/chalk and quinine minerality.  In other words, it’s got Watervale stamped through it like Brighton through a stick of rock!  Terrific focus and length. 12%

A relatively broad, developed wine – worlds apart from the 2004 and 2002 either side.  It has a slightly distracting peppermint note to the nose and a broad, waxy palate with oilskin undertones to its grapefruit. 13% 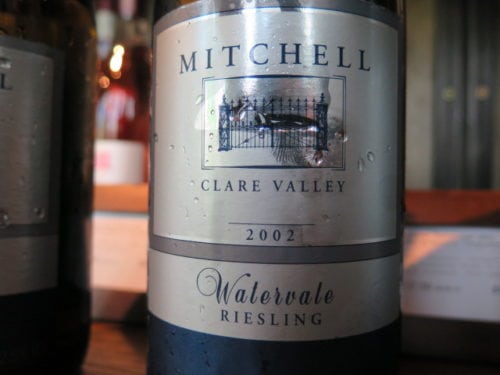 This was the first vintage with real influence from wild ferment.  Andrew Mitchell told me it was “very controversial at the time. Huon Hooke picked it as his wine of the year but others criticised it for its ‘funkyness,’ which was considered totally out of order in riesling as ‘faulty,’ but paradoxically applauded in chardonnays as ‘complexity.’ ”  Although subsequent vintages feature wild yeast influence (and from 2010, wines are totally wild yeast fermented) , Mitchell backed off it a little and relied on more influence from neutral, cultured yeasts. Pale with green glints and a green herbal edge to its lifted florals/bath salts nose and palate.  It retains lip-smacking juicy tartness to its concentrated lime cordial and shred fruit.  The finish is really pithy, with a rub of texture and spice – a touch of waxiness too –   which in no way detracts from its line or length.  Very good.  Though looking back, as I write up this tasting, I wonder if that tartness on entry suggests it is just beyond its peak….  At any rate, it seemed much more vital than the 2001 and 2003. 13.5%

This wine’s deeper yellow hue prompted me to enquire if this wine was bottled under cork.  In fact it was the first vintage to be bottled under screwcap.  Similarly, the palate is more developed than the others, with tufa (a raw porcini note), a hint of paraffin wax and richer orange peel, lime shred and honey.  There’s a touch of warmth coming through on the finish but this wine is still holding its shape and fruit very well. 13%