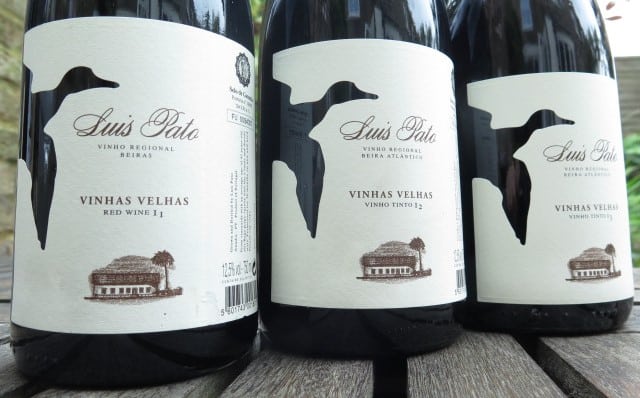 Luis Pato boasts a dynamic range of wine.  New in 2015 is Vinha Formal Cerceal, which I’ll write up in Part 2.  For now I want to focus on Pato’s great value Vinhas Velhas (old vines) label.  I reckon these medium-bodied, autumnal wines deserve their very own place in the spotlight.

Whilst Pato’s single vineyard reds tend to be very polished, Vinhas Velhas Red has an attractive rustic note which I like very much.  It’s relatively accessible for Baga yet, with the structure and complexity to age well, faithfully represents both region and variety.

The Baga vertical also reflects a climate which Alianca’s Director of Winemaking Francisco Antunes captured memorably.  He described Bairrada as “one of the most difficult places in Portugal to produce wines, particularly reds and particularly if you are depending on third cycle [late ripening] varieties Baga, Cabernet Sauvignon and Touriga Nacional.”

You can see the impact of September rains on the lighter 2013 and the concentration of a widely acclaimed vintage in 2011.  The elegant 2012 sits between the two and, right now, is my favourite. 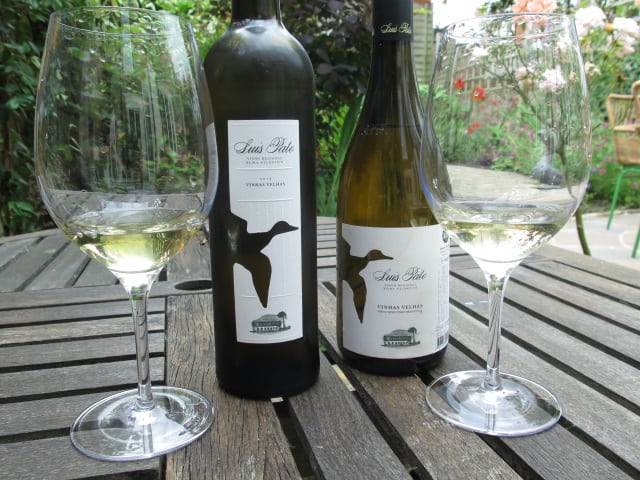 My 2015 and 2014 samples came in different bottles with different closures.  This one,  in a Burgundy bottle under cork.  It is a different blend too – the 2015 with Bical from chalky clay soil as well as Cercial and Sercialinho from sandy soils, which perhaps explains why this wine saw a few months in aged chesnut casks (Bical has more body). On first impression the 2015 seemed the less concentrated of the two even though 2015 was the better year.  It’s a little blustery on day one with leesy, bready, dregs of a beer bottle aromatics and flavours on the palate which did not endear me to it!  It starts to hit its stride on day two.  The leesy notes lend a more attractive cheesiness to nose and palate and the fruit – concentrated golden delicious, steely grapefruit and aromatic crunched passionfruit seeds – leads the way.   With a firm acid backbone and slightly bitter malic cut of green apple peel, it’s tight and long.  I would stash this away for at least a couple of years to allow its flavours to really mesh.  12.5% £14.99 at Corks Out

No Bical in this unoaked blend of Cercial from chalky clay soil and Sercialinho from sandy soil.  Sealed under screwcap it’s fresh as a daisy with a well focused, very vibrant nose and palate of steely grapefruit, firm pear/quince, fleshier, juicier golden delicious and leesy undertones.  On day two it has a nice touch of nougat/incipient honey.  With nice backbone, flesh and focus it’s drinking well now.  If you like premium Macon, check this out. 13% £13.50 at Bottle Apostle, £14 at Highbury Vintners.

Vinhas Velhas means old vines and Baga is sourced from vines averaging 45 years old.  The 2013 spent 18 months in new and used French oak casks.  Reflecting the (wet) vintage, the 2013 is easily the palest of the three reds.  Which allows for a certain translucency of Baga/Bairrada terroir.  A delicately smoky nose and palate (a dead give away of Baga on chalky clay soil) has great Pinosity to its just ripe, round but dry red cherry and raspberry fruit. Floral notes emerge as it opens up, adding to the Burgundian analogy.  But the textural rub of iron filing tannins and emphatic smokiness to the finish remind you that this is Baga.  As does the mineral-sluiced, persistent finish.  Lovely for shorter term drinking.  12.5%

Burgundy in hue but deeper with more opacity to the core than the 2013.  And, correspondingly, a tighter more concentrated nose and palate with more evident fruit (and oak) sweetness on nose and attack – delicious red cherry, lively pomegranate, fleshier, salty plum going through.  There’s an attractive, pithy, suede-like textural rub (suede-like aromatics too) to the tannins which I often find with Pinot Noir (the suede texture/aromatics).  With a long wisp of smoke/puff of iodine powder to the finish, it’s got Baga stamped all over it.  Good staying power too judging by its performance on days two and three, which reveal violets, peonies, juicy blackberry and a touch of bitter chocolate/cherry truffle (this wine spent 24 months in new and used French oak casks). Baga’s persistent, mineral-sluiced acidity punches past the fruit, making for a long, dry (flavour, not tannin) finish.  An elegant Baga which is drinking well now and has great mid-term (maybe beyond) prospects.

Good opacity heralds this concentrated vintage, as does a spicier, darker nose with more evident oak (this vintage was aged for 30 months in new and used French oak casks).  In the mouth there is markedly more sucrosity to the tannins and fruit, which gives a silkiness to its perfumed blue(berry), black and red fruits, here the cherries macerated.  Sweet dried spices and an incipient membrillo mellow sweetness subtly come through on the finish.  Baga’s wispy smokiness and a pronounced gravelly minerality to the back palate deftly balance the impression of sweetness. Plenty to get your chops into now and, looking ahead, I expect this vintage to offer lots of drinking pleasure well into the mid-term and beyond. 12.5%   A great buy at £20 at Highbury Vintners, £22.99 at Corks Out