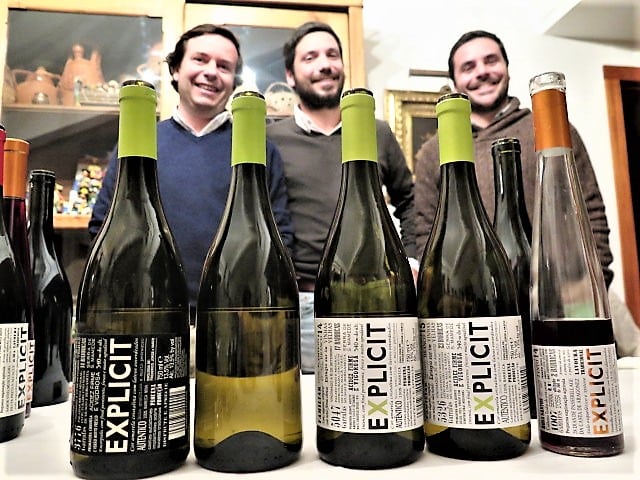 To be labelled Portalegre DOC, wines must be vinified in Portalegre as well as made from local fruit.  It’s a bone of contention for Susana Esteban, who is increasingly looking to the Alentejo sub-region for her fruit (my report on a visit to her Portalegre vineyards to follow).  The Rosa Santos brothers have found a clever work around for Explicit White, which is made from 100% Portalegre fruit.  The label instead broadcasts the wine’s cooler climate credentials by referencing the Serra São Mamede and its elevation.

I caught up with the trio of winemaking brothers at their parents’ vineyard in Estremoz, in the foothills of the Serra d’Ossa.  It is south of Portalegre, but still in the Alto Alentejo, with unusually high, steep, schist-strewn slopes at 352m.  Jorge Santos Rosas explains that they looked north, to Portalagre, for Explicit White because “it was an opportunity to make a different white from Alentejo, just like our reds are different.” 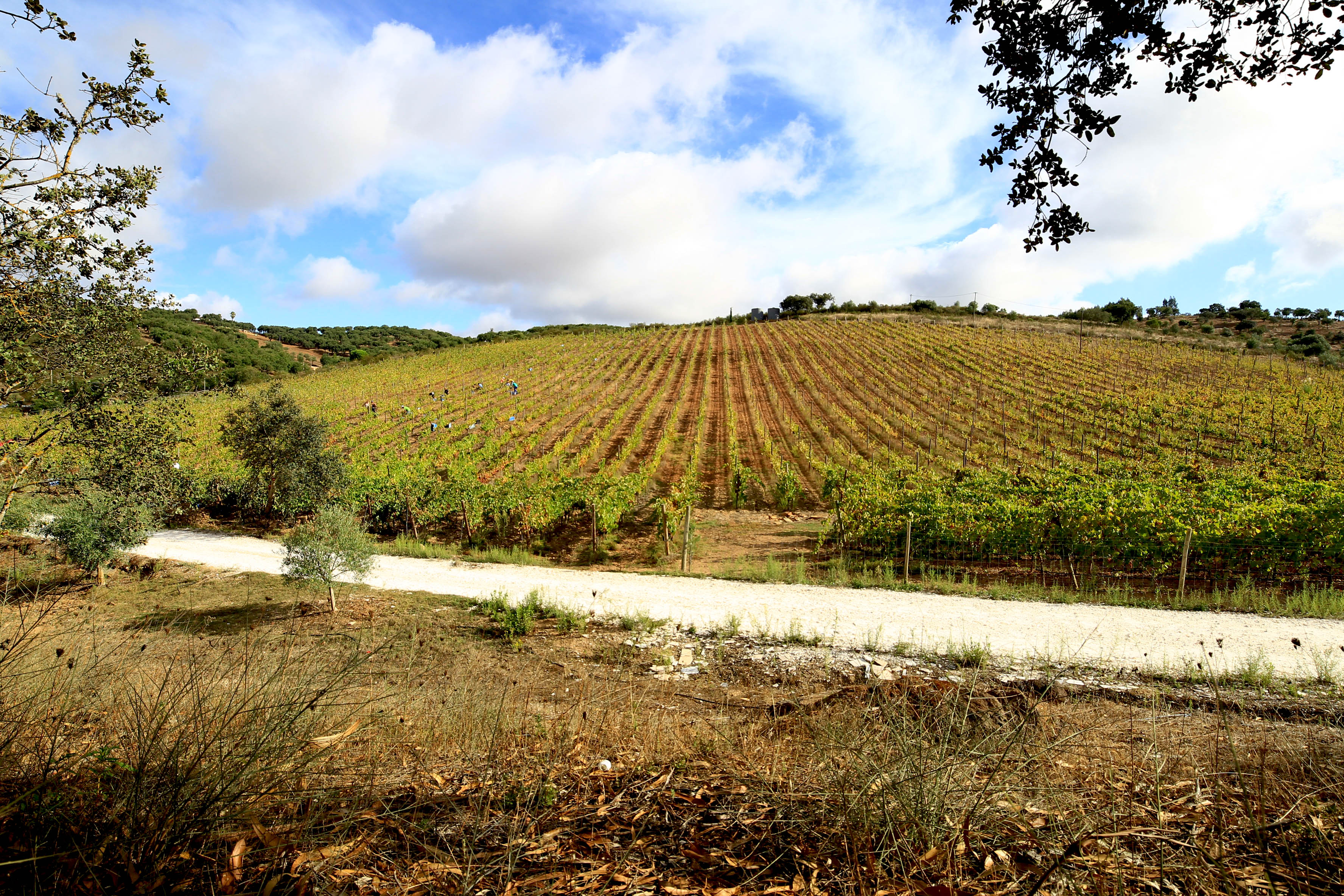 “We knew about the quality and the difference,” says Frederico because, prior to taking on Explicit full time in 2015, he worked at Terras Alters and [Fronteira], who bought grapes from Portalegre. He thinks it’s a pity bigger companies “have used very good fruit to enhance the quality of their wines, but are missing the terroir,” because “they are blending away potential of region”  Proud of their work communicating about the sub-region through tastings and social media, Jorge believes consumers can see the added value from Portalegre.

Blended away or not, Vasco confirms that there is “a big buzz” about Portalegre.  He points out that the Co-operative has been bought out, Altas Quintas has sold its vineyards (but is maintaining the brand) and Esporão are buying land in the sub-region.  Jorge even claims “the strongest DOC today [in Alentejo] is Portalegre – the recognition and value of white wine from Portalegre is bigger than a red from Borba or Antão Vaz from Vidigueira.”

Success brings its own problems.  The brothers are not the only ones to mention that it has become trickier to source grapes because the big players are “kidnapping our suppliers.”  While it was “easy” to source grapes in 2011/2012, since 2014, their strategy has been to buy more and more grapes from former Co-operative grower/members with small vineyards.

It’s time-consuming – less efficient – so why do it? Jorge points out that, since the Co-operative ceased trading, its grower/members have lost the special dispensation they enjoyed to sell grapes without the requisite paperwork for their vineyards. Apparently the Alentejo CVR are going to make good this legal limbo but, in the meantime, it is off-putting for the the corporate raiders.

Below you’ll find my notes on a vertical tasting of Explicit’s white wines and the latest releases of their reds.  The first wine was made in 2008 (2814 bottles of the red) and sold in 2011. Although production remains small, today the family produce over 50,000 bottles. Growth has been organic, says Jorge “we didn’t go to the bank or third parties,” with the aim of “slow, steady, solid growth, with ambition but with our feet on the ground.”  Implicit (the entry level brand) is “the tool for growing;” the family have just submitted a project to grow another 1.8ha to Syrah, maybe Aragones (again planting the Tinta Fino clone) under the Europe-wide Vitis funding programme. 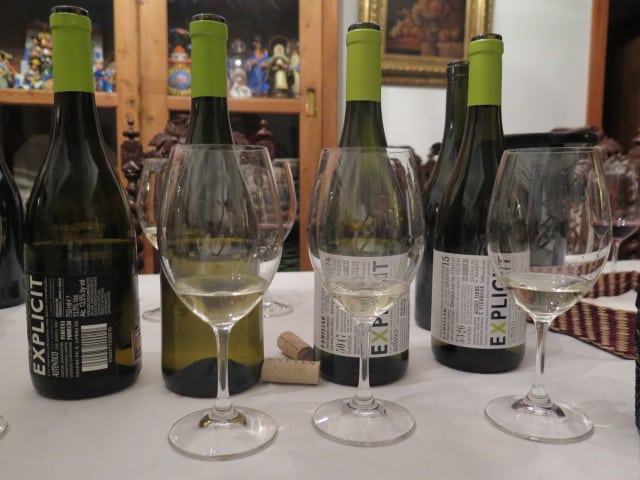 Explicit White starts fermenting in tank (inoculated yeasts, no temperature control) and completes the process in old barrels.  It spends several months on lees, with a bit of batonnage.   A funky nose leads onto a limpid, gently round but mineral, fresh palate with riffs of white pepper, fresh ginger and green tea. Nicely unpushy, mineral wine with texture.  Very much the style.   The 2015 was sourced from Porta da Espada (at 614m) and two small vineyards, one from Salão Frio (at 662m) and the other near Quinta da Benfica (at 620m). 13%  5326 bottles

A touch of mountain pond to the nose, yet the lightly lemony, very mineral (think quinine – G & T!) palate has a sorbet-like clarity at its core, with a constellation of sweeter nutty/leesy hints and ginger, spice and minerals/salt surrounding it.  Like the 2015, it’s gently round and limpid, which gives it mouthfeel and a take-your-time-relax quality.     This vintage was made with grapes from Porto da Espada (at 614m) and 3 vineyards in Salão Frio (at 662m).   13% 5047 bottles

With its tinge of gold, this vintage looks older than its years in comparison with the other markedly paler wines.  Perhaps because, in this year, the barrels were new (it was the first release).  Again, spicy, gingery and mineral-sluiced going through, with tinned peach, nice balance (especially going back with time in glass), when its fresh acidity is still pushing out – extending – the finish. This bottle feels like it has more to give.  I say this bottle, because another I drank over a dinner during Simplesmente Vinho was not as fresh. 13.5% 3776 bottles 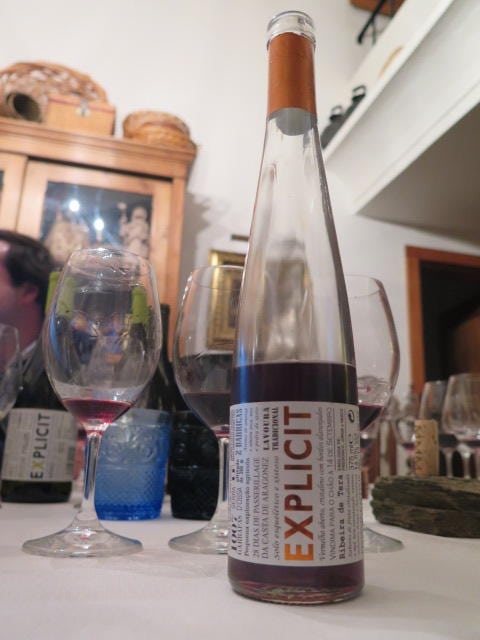 A muscular blend of Syrah, Alicante Bouschet and Aragones from the family’s vineyard, which faces the Ribeira de Tera valley at 352 metres above sea level.  It was aged for 12 months in used French oak barrels + 12 months in new oak French barrels (Seguin-Moreau and François Freres). It is dark, spicy and mineral with liquorice, dust (schist) and a ferrous tang of blood to its ripe blackberry fruit.  Though full-bodied, you feel the skeleton – firm fresh acidity and an abundance of spicy, chalky tannins – beneath.   It is both more refined yet apiece with previous vintages I’ve tasted (reported here).  Puts me in mind of premium Southern French reds from the Languedoc or Roussillon. 15% 16,317 bottles

This tête de cuvee – best grapes, best fermentations – sees 24 months in all new French oak barriques.  It is the inkiest hue.  Opaque.  Almost squid ink, such is its impenetrability.  Though this is a take-no-prisoners kind of wine, the site is still clearly articulated.  On the one hand you have lavish, concentrated, sweet blackberry and crème de mur with some alcohol warmth.  On the other, there is a freshness, which stems from this wine’s/site’s acidity and cool, mineral tannins.  It’s “the point of honour,” says Jorge where the new flagship is “an overwhelming style from Alentejo.” A style which, although he observes, “people are running away from it,” the brothers are embracing, “because we really believe this is our Alentejo – this is our dryness, a vineyard with no water and a very hot year, so as high a maturation as you probably could get.”  In bottle for over a year, it is due to be released around now. This wine would appeal to lovers of full-on Californian Zinfandels that I recall from my Oddbin’s days.  It most definitely requires a slab of protein to accompany it.  16.5% 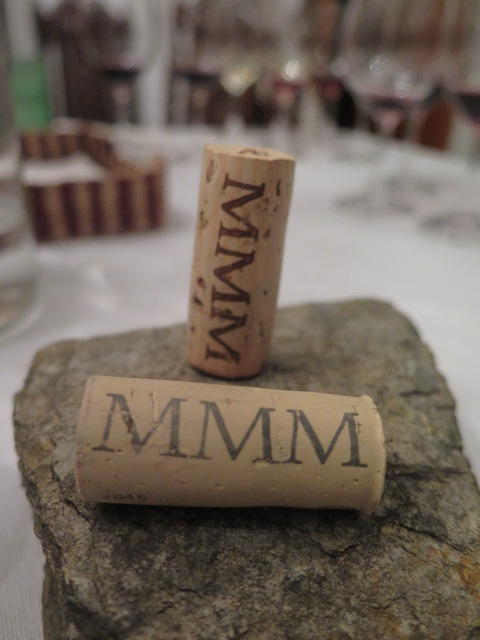 Made from 100% Aragones, harvested late and then dried on rocks in the vineyard for 2-3 weeks for extra complexity.  It took four hours to (whole bunch) press the grapes (basket press).  The resulting elixir was fermented and aged in two one-year-old barriques for a year.  This late harvest Aragones shows a little membrillo/honey on the nose, with a medicinal/spicy liquorice hint.  Notes which follow through together with sweet plum jam and buttery, lightly caramelised plums.  It has impressive persistence/freshness; a touch of volatile acidity lends pace.  I’m told it has a little over 100g/l of residual sugar. Toothsome but balanced, it’s very moreish.  14.5% 887 bottles