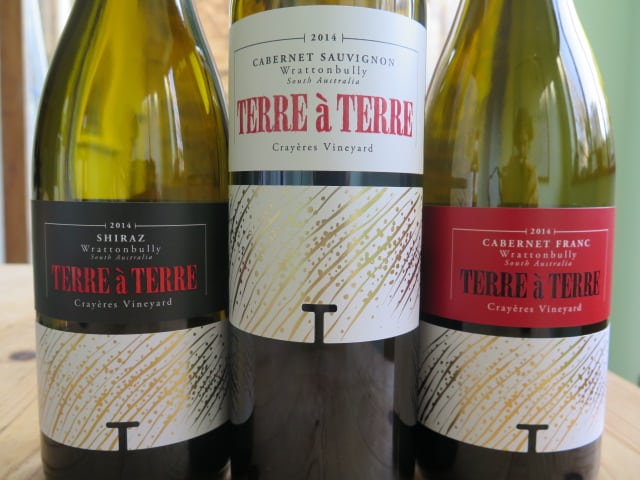 I visited with Bizot in 2013 and was impressed by Terre à Terre’s Sauvignon Blanc and Cabernet Sauvignon.  So it was good to catch up with the latest releases of these cuvees and taste a bunch of new wines. 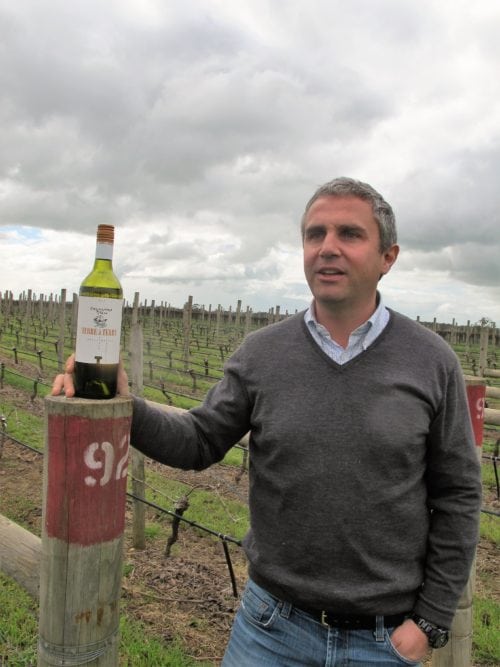 They very much affirmed the philosophy with its emphasis on restraint and elegance so as better to showcase terroir.  Sometimes, I felt the wines were a little too restrained, but no doubt that is also a question of vine age.  Certainly, the multiple releases showed a bit more palate weight and personality.  That said, I very much liked the first release Shiraz.

Below you’ll find my notes, preceded with a bit of background information furnished by the producer.  I’m looking forward to returning to the region in October to judge at the Limestone Coast Show. 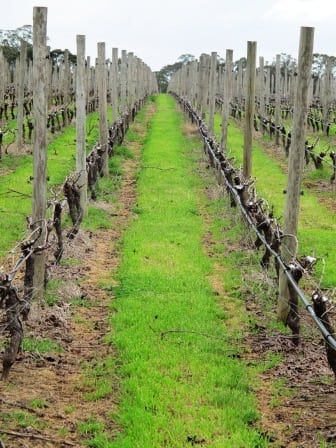 Named after the chalk cellars that are found throughout Bizot’s region of birth, Champagne, France. Similar natural structures are found underneath this very special vineyard, and they are now the subject of a research project led by a team from the University of Adelaide as they are full of undisturbed ancient fossilised remains.

The Crayères vineyard is located next to Tapanappa’s Whalebone Vineyard, at the top of a north-south limestone ridge in Wrattonbully. The Terra Rossa top-soil is characteristic of the area.

The red grape varieties were planted on rootstocks in 2008 using cuttings from the neighbouring Whalebone Vineyard and French clones at a relatively high density for the area (4,444 vines per hectare, similar to the density of vineyards in Saint Emilion). The fruiting wire is only 50cm above ground – low.

The fruit, all hand-picked, is transported back to the Tiers winery in the Piccadilly Valley (Adelaide Hills).

The 2015 vintage was rather early for our Sauvignon Blanc vines. Budburst finished late September 2014, and flowering was in full bloom by mid November.

The 2014 growing season was very challenging to start with cool and humid weather around flowering and severe heatwaves in January and early February; however, the growing season finished with very mild and warm conditions, with on average 6 weeks between véraison and harvest for all varieties.

The Heat Degree Days summation (calculated as the sum of the monthly daily mean minus 10°C for the months of October to April included) was estimated at 1,414 degree days, which is lower than the average for Saint-Emilion (1,530 degree days).

One striking feature of the 2014 vintage was a very good and uniform set in all varieties, leading to a very harmonious and slow ripening at the end of the season. As a result, the fruit had great colour and amazing tannins and flavours. 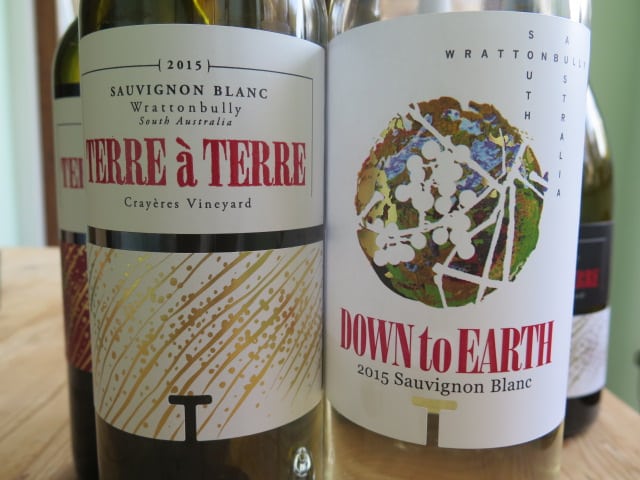 This is the fourth release of this cuvee from a parcel of the vineyard planted in 2004 where the Terra Rossa is covered with a shallow layer of eolian sands, “making it highly suited for Sauvignon Blanc.”  This is an unusual Sauvignon, perhaps because of the close spacing (4,444 vines per hectare), perhaps because it features a new clone from the Cher region in France, planted in 2013.  Anyway, it doesn’t taste like other Australian Sauvignons I have tasted. It shows nectarine with a touch of skin tartness, sweeter passionfruit notes and dried herbs.  A leesy, sweet cookie dough character perhaps references the oak (now I’m writing this I notice that the technical fiche makes reference to residual sugar)?  Lacks a bit of drive and focus for me, but perhaps that’s where the next cuvée (or the residual sugar) comes in? The wine comprises a  blend of 72% earlier harvested fruit (19th February), which was fermented at low temperatures and aged on lees for 5 months, with 3 lees pump overs. The balance, harvested on 24th February was whole bunch pressed and fermented in a new 3,000l oak foudre and a two-year old 2,000l oak foudre. The alcoholic fermentation in foudres was very slow (4 months) leading to very unique flavour profile and some residual sugar (low though, at 1.7g/l).  UK RRP £18.95 at Vagabond. 13.5%

This was the very first wine produced – in 2008 and, from the outset was fermented and aged in wood.  This wine in old barriques and 600l demi-muids (2 new). It was then racked off the gross lees back into the same oak, and aged in barrel for 6 to 9 months; no malolactic fermentation.  Terre a Terre Sauvignon (harvested 18th February) has a tighter nose, with a lick of vanilla bean, blackcurrant bud, lime/lime oil, steely grapefruit and curry powder (a quality I find in Loire Sauvignon from very flinty soils) on the attack.  As it opens up, it shifts gear from citrus to orchard fruits with crisp apple and bright pear, all the while supported by a ripe but insistent backbone of acidity.  On day two, the blackcurrant bud, grapefruit and a touch of oak spice dance over the palate.  Like the Cabernet Sauvignon, it has a super, very persistent raft of mineral-sluiced acidity which seemingly filters the fruit on a long finish, leaving you with a delicious chalky, pebbly acidity.  1,300 cases of 6. Lovely – I think much the better buy at UK RRP £22.95 at Vagabond 13.9% 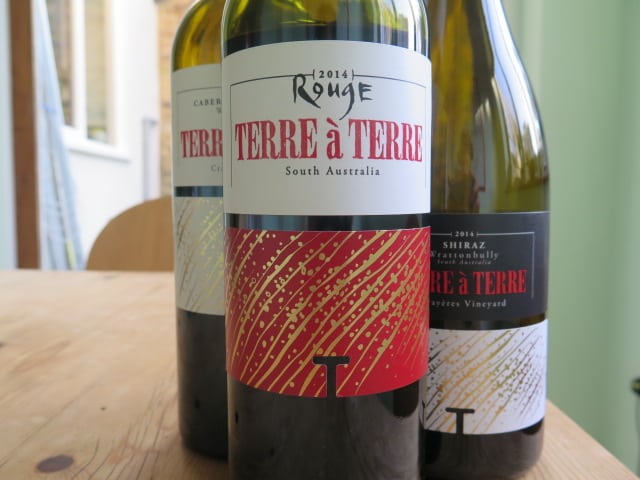 Though labelled South Australia, this blend of 60% Cabernet Franc, 28% Shiraz and 12% Cabernet Sauvignon (the first release) is actually a single vineyard wine from the Crayères vineyard, Wrattonbully. Sweet but elegant with juicy red and blackberry and cherry fruit to nose and palate and floral notes of dried roses.  On day two, it reveals a little more personality, with hints of bay leaf and tobacco.  Medium-bodied, with fresh but integrated acidity and smooth tannins, it is a svelte, very drinkable red. A sophisticated entry level ‘red’.  The Shiraz and Cabernet Sauvignon were aged for around 18 months in seasoned French oak barriques, the Cabernet Franc in a new 4,300l French oak foudre and bottled without filtration.  750 cases.  14.5% RRP £18.95 Vagabond

Wafts of dried roses and tobacco on the nose, with soft plum and raspberry fruit and a hint of chocolate.  Medium-bodied with fine, silky tannins.  On day 2 it shows a hint of bell pepper. Very well mannered if a little wandering on the finish.  I’d like to have seen a bit more structure and character, but this is the first vintage.  After 24 days fermentation and maceration, the must was pressed off skins and racked to 225L French oak barriques (30% new oak) where it aged for 18 months. After a very light egg fining in barrels, the wine was bottled without filtration. 240 cases. RRP £24.95 Vagabond 14.5% 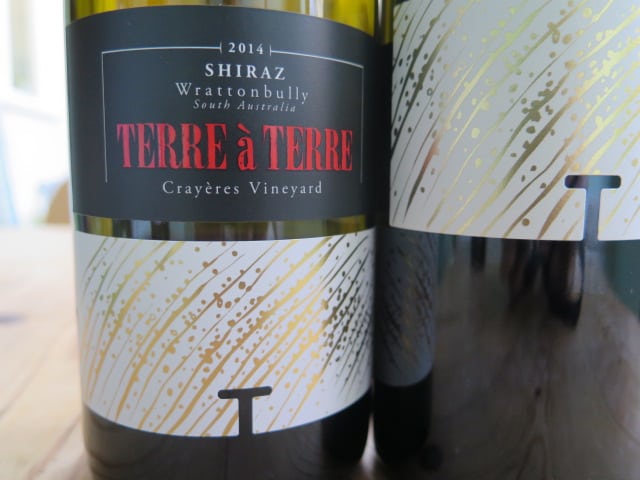 A deeper hue, more purple than red.  All the cool climate Shiraz signifiers to nose and palate, with meaty, peppery notes and just a hint of violets.  In Terre a Terre style, the tannins are very refined, with an attractive chalky texture.  A touch of coffee rock/mocachino oak lends a touch of sweetness going through, but it treads delicately.  On day 2, the pepper seems spicier and there’s a touch of liquorice too.  Nicely done. On account of the tannins it is svlete, yet without the weight that usually comes with that.  Distinctive.  Very good.  A lovely debut. After 24 days fermentation and maceration, the must was pressed off skins and racked to 225l French oak barriques (70% new oak barriques from Vallaurine in Côtes du Rhône and 30% old barriques) where it aged for 12 months. The wine was then racked to a 5-year-old, 4,000L foudre (French oak) and aged for a final 6 months. After a very light egg fining in foudre, the wine was racked once more and 9% of 2014 Reserve Cabernet Sauvignon was added to the final blend before bottling without filtration. 500 cases.  RRP £27.95 at Vagabond 14.5% 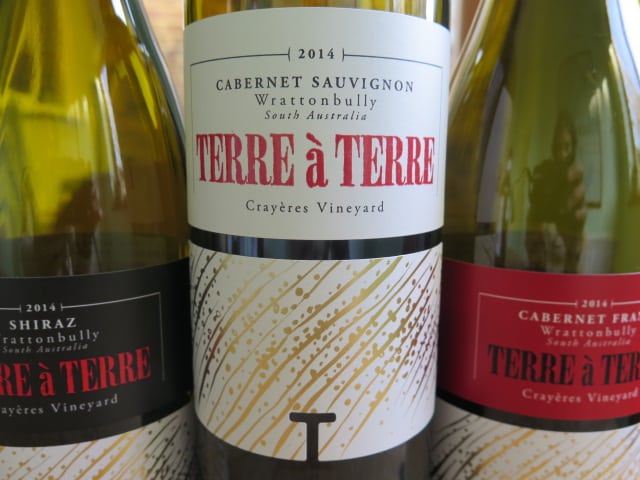 This is the fifth release of Cabernet Sauvignon from the Crayères vineyard.  Interesting because, while staying true to the medium-bodied, elegant style, it has that bit more structure, volume and personality (though the vines were planted at the same time – 2008 – similarly on rootstocks using cuttings from the neighbouring Whalebone Vineyard and French clones).  The Cabernet Sauvignon has a tight blackcurrant/ blackcurrant gum nose and palate, with lifted blueberry, juicy plum, a hint of cool, menthol lift and very subtle black olive, dried herb and dusty earth notes.  The tannins are fine grained but firmish, lending focus and a gentle touch of grip to the finish.  An undertow of chalky mineral-sluiced acidity shoots out beyond the fruit as if to reinforce this wine’s terroir and cool climate credentials.  The oak is polished and very well-integrated oak. A classy, terroir-inflected medium-bodied Cabernet. After 21 days fermentation and maceration, the must was pressed off skins and racked to a 1-year-old 4,000l foudre (French oak) where it aged for 12 months. The wine was then racked to another 1-year-old, 4,000L foudre (French oak) and aged for a final 6 months. After a very light egg fining in foudre, the wine was racked once more and 5% of Cabernet Franc was added to the blend before bottling without filtration. 450 cases.  14.5% RRP £26.95 at Vagabond 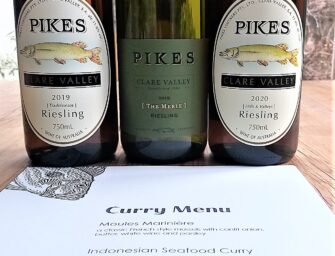