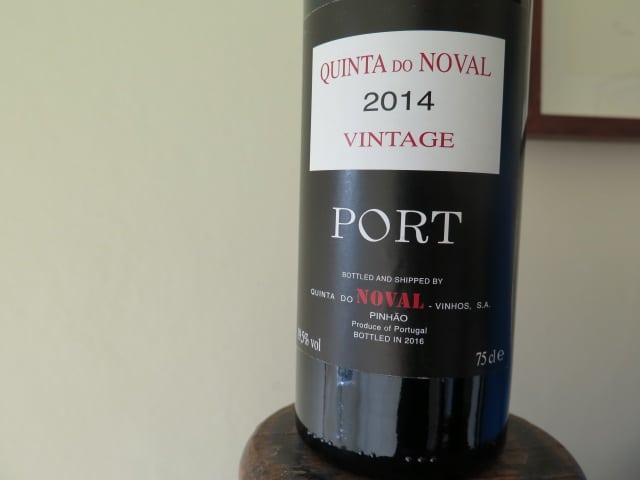 “[W]e continue to follow our slightly eccentric path at Noval,”  says Quinta do Noval’s MD Christian Seely.   Not just with the declaration of a Vintage Port in 2014, which experienced rainfall over vintage.  The declaration of four vintages in a row (2011, 2012, 2013, now 2014) well and truly up-ends the three years in ten rule of thumb.  And then there’s the release of Noval’s iconic Nacional from a tiny old un-grafted plot 15 years after the vintage!

In the press releases accompanying the releases, Seely explained the rationale behind the 2014 as follows:

“The fundamental principle for us is that if we have a wine that we believe is of the quality and personality required to be bottled as a Quinta do Noval Vintage, then we should bottle it and declare it, whether or not we declared a Vintage the year before, and even if the quantity of wine involved is very small.”

And here’s the back story for the Nacional 2001’s delayed release:

“Although we declared Quinta do Noval Nacional 2001 officially in 2003, we did not release the wine for sale at the time. Nacional is always a powerful concentrated wine, but in its youth the 2001 was extremely backward and quite closed up, dense and very tannic. Since we had just declared and released the 2000 Nacional, we decided to lay down the 250 cases of Nacional 2001 that were produced and keep them back for release at a later date.”

The vintage: The heavy rainfall that we had in 2013/2014, well distributed throughout the year, reasonable temperatures in winter and a fresh month of August, enabled the vines to maintain a healthy appearance, with lots of leaves throughout the cycle, which protected the grapes from the peaks of heat during the summer, safeguarding the health of the bunches. At the end of August, the harvest was looking wonderful, with beautiful healthy grapes and an excellent sugar and acidity balance, ideal for making great Port.

The winemaking: Grapes are trodden by foot to obtain the must, then during fermentation macerate to obtain the best possible extraction in the lagares, the traditional stone vats from the Quinta. The Port was matured for 18 months in old wooden casks in the air-conditioned cellars of the Quinta, at the demarcated region of the Douro Valley before bottling. Alcohol: 19,5%vol Residual Sugar: 101 g/dm3

My tasting note: A blend of Touriga Nacional, Touriga Franca, Tinto Cão, Tinta Francisca, Sousão.  It’s a little spirity on the nose right now, but has very attractive hints of orange blossom and crystallised ginger.  Its vivid hue is matched by an equally vivid attack of fresh, bright red and black berry and cherry fruit.  A mineral undertow accentuates the elegance.  The tannins are fine, very powdery – incipient velvet – but for now, mouth-coating, which makes for a surprisingly brooding, cocoa powder-lifted finish to this slyphlike wine.  Love the intensity of perfume and freshness to the finish. It showed very consistently over three days.  Just 1,000 cases of twelve bottles produced.  19.5%  The UK RRP is approximately £60 a bottle. 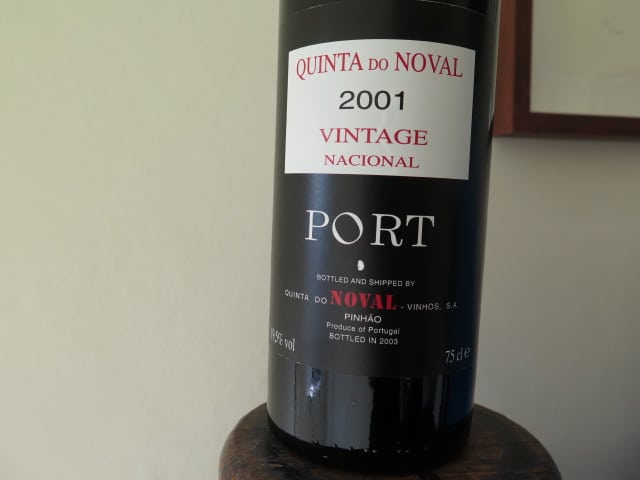 The vintage: The first half of the viticultural year started with 5 months of heavy rains that presented certain challenges in the vineyard but had the positive effect of building up water reserves in the soil. Bud burst took place earlier than usual in March due to mild winter temperatures. A cool spring brought flowering in May as usual in good conditions. A heat wave in June reduced the crop but the rest of the summer was pleasant and favorable to maturation and grapes reached high levels of ripeness. Harvest at Quinta do Noval started on the 21st September with ideal weather conditions, sunny days and cool nights. 2001 was a very generous productive year with very good quality, showing wines with intense colour, wonderful bouquet and great structure.

The winemaking: The grapes were put in a small traditional lagar of the Quinta and the treading was performed by a group of 6 men for 3 hours. Fermentation occurred with temperature control at 25º/28ºC. The Port was matured for 20 months in old wooden barrels in the air-conditioned cellars of the Quinta, at the demarcated region of the Douro Valley before bottling. Alcohol: 19,3%vol Residual Sugar: 76,8 g/dm3

My tasting note: I like this vintage very much for Douro wines.  I think of it as a well-structured yet very expressive year, with a wildness about it – lashings of spice, esteva and smoke.  So it is with this vintage of Nacional.  It’s holding its colour – deep crimson – superbly.  Very evenly, with little trace of ageing at the rim.  Resinous esteva, spice, smoke and a smirk of perfumed fruits of the forest with inky blackcurrant make for a wild, very characterful nose – the Douro on steroids!  It really draws you in.  Nacional 2001 is spicier still on the palate, with liquorice, clove and pepper – pepper shading into pepper-mint – hot yet cool, with esteva resin and smoke to its tightly clasped black currant fruit.  Sinewy, savoury tannins – a touch velcro on the finish – add to the perception of dryness (this Vintage Port has relatively low residual sugar). With fresh acidity, Nacional exudes a punchy energy.  With tightly coiled fruit and great architecture to its tight, mineral finish I couldn’t agree more with Seely’s analysis “thrilling to drink now, but with huge potential to develop by ageing in bottle in years to come.”  This is a dauntingly youthful Nacional. 250 cases produced.  19.5%  UK RRP is approximately £600 a bottle.