Nostalgia – The Fladgate Partnership’s Adrian Bridge and David Guimaraens at an ‘old school’ London launch of 2017 Vintage Ports, in September 2019

In my 9th post reviewing 2018 Vintage Port releases, I take a look at The Fladgate Partnership trio.  Unusually, they comprise one classic blend – the third consecutive release of Taylor’s Vintage Port and two of the best examples I can recall tasting of  Croft’s Quinta da Roeda Single Quinta Vintage Port 2018 and Fonseca Guimaraens Vintage Port 2018 (a ‘second’ Vintage Port from Fonseca’s three quintas, made in a more approachable style).   As for the current 2020 harvest, with “particularly violent” repeated scorching, ‘currant’ springs to mind – see the detailed report below.

Commenting on the unusual decision to declare a single classic Vintage Port, Taylor’s managing director, Adrian Bridge said, “This is a year in which overall conditions were excellent but exceptional in the Douro Superior. As Taylor’s is the only one of our companies with extensive land holdings in this part of the Douro, it has been able to make a Classic. All our properties are always farmed so that every grape has the potential of being made into Vintage Port.”

Head winemaker, David Guimaraens, added: “The Douro Superior enjoyed the combination of abundant ground water and hot summer weather which often produces great Vintage Port. It has given us the excellent phenolic maturity typical of a hot ripening season but the fine multi-layered fruit, fresh acidity we normally see in cooler years.”

Adrian resumed, “Although a Classic declaration normally only happens about three times a decade, the exceptional run of years has meant that Taylor’s is able to make a third in a row. This is very unusual but our principle is that we only declare a Classic Vintage when the quality is there and this is dictated by the year, not by any other consideration. Indeed, in view of the economic situation in which we find ourselves, we will bottle in July as usual but will not offer the wines until early 2021”.

The Fladgate Partnership’s Ports are imported into the UK by Mentzendorff who have indicated that, since the 2018s will be released to the market in 2021, no RRPs are available just yet.  The Ports were sampled from half bottles.

Commenting generally on the year, David Guimaraens noted, “The 2018 harvest has produced outstanding Vintage Ports, although the year was not without its challenges. These included the severe hailstorm which devastated many Pinhão Valley vineyards on 28th May including those of Taylor’s Quinta do Junco.”

He added, “It is important to note that the 2018 wines have the highest colour intensity of recent vintages, always a sign of good extraction and longevity.”

As for 2020, The Fladgate Partnership report (attached) indicates that, although rainfall was reasonable, topping up soil reserves, yields have been low owing to low bud fertility and “particularly violent” repeated scorching (Tinto Cão is singled out as faring well, however); mildew was an issue too.  The harvest was early owing to both low yields and hot weather in the last week of August and into early September, which resulted in “a race to bring the grapes into the wineries. It is almost as all the vineyards of the region have ripened at the same time.”  You can read the full report here:  THE FLADGATE PARTNERSHIP REPORT – CLIMATE OF THE 2020 – Douro Valley 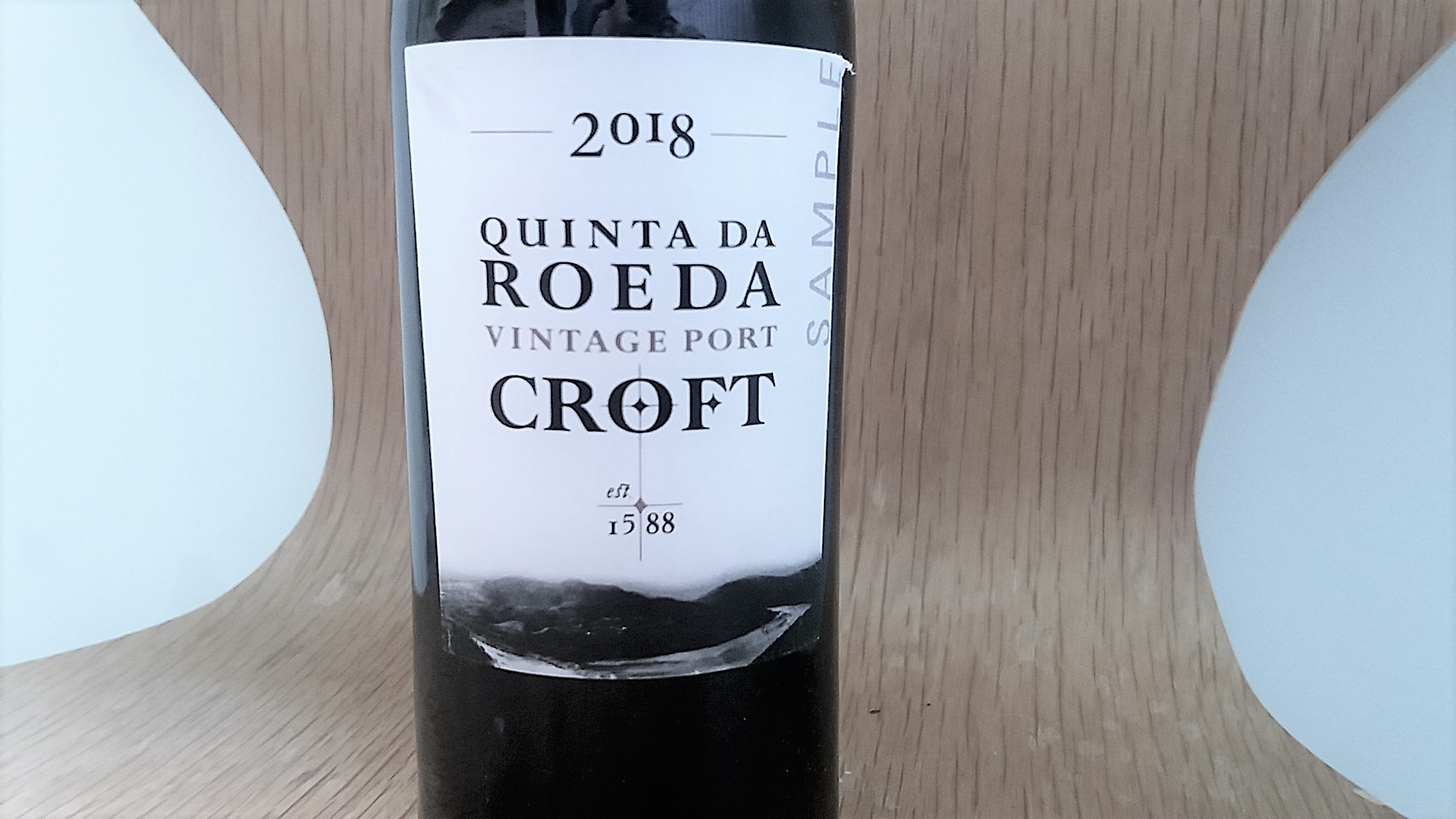 The weather pattern in 2018 was somewhat erratic and sometimes challenging but in the end the conditions required to make excellent Vintage Port all fell into place.  The year started extremely dry, as there had been very little rain the previous year, and in January about two thirds of Portugal’s land area was suffering from drought.  The stress on the vines from the arid conditions was relieved in March by heavy rainfall.   The weather station at Croft’s Quinta da Roêda recorded 223 mm of precipitation during the month. This replenished the ground water reserves depleted the previous year and this ground moisture was to prove decisive during the ripening season.  The weather remained cold and wet until the end of June and the vineyard cycle was about three weeks behind the previous year’s calendar.

A dry and relatively mild July was followed by a baking hot month of August, temperatures well above 40°C being recorded early in the month in the eastern districts of the Douro Valley.  The intense heat allowed the cycle to accelerate.  The abundant reserves of water in the ground, built up in the spring, meant that the grapes matured evenly and gradually in spite of the hot conditions.  Picking at Quinta da Roêda began on 17th September, in hot, dry weather.  Yields were low but the wines were recorded as have excellent colour intensity, very good acid balance and elegance and freshness of fruit.

Deep purple, exceptionally, beguilingly, aromatic – so pretty and perfumed – with bergamot and orange blossom lift to its intense berry fruits.  I thought initially black (berry and cherry), but opening up, the emphasis is on velvety red fruits, especially raspberry, deliciously inter-twined with lively dried sage, pine needle, esteva, sandalwood, liquorice and black pepper top notes. Milk and bitter chocolate nuances bring richness.  The prominent yet fine fretwork of tannins put me in mind of whole bunch wines –  animated, spicy  and (ripe/dried) herbaceous, with light grip.  On day four, it was still singing, with zesty bergamot and orange blossom, a lush core of raspberry and chocolate, the tannins and acidity persistent.  Just lovely and very accessible.  2,000 cases. The character of the 2018 wines was influenced by an unusual and occasionally challenging viticultural year. This followed a very hot and dry 2017 and, by mid-January, 56% of Portugal, in particular the northeast, had been declared to be in severe drought. Fortunately, March was very wet and the heavy rainfall, totalling 223 mm at Pinhão, built up the reserves of ground water which would prove vital during the ripening season. Until the end of June, the weather remained cold and wet, causing mildew in some vineyards, and hailstorms on 28th May caused extensive damage to some properties in the Pinhão area.

The vineyard cycle was about three weeks behind that of the previous year, with véraison only occurring in late July. The weather in July was dry and relatively mild but August saw the arrival of intensely hot weather with temperatures well over 40°C being recorded in the Douro Superior area in the first days of August. The heat allowed the cycle to catch up and, although the hot weather continued, the large amount of moisture in the soil resulted in an even and balanced ripening of the grapes.

Harvesting began at Fonseca’s Quinta do Panascal in the Távora Valley and on its Pinhão Valley properties, Cruzeiro and Santo António, in the week of 22nd September and was carried out in hot, dry conditions. The young wines were very deeply coloured and stood out for their fresh fruit character and excellent acidity.

A focused nose, initially quite restrained/inward-looking, compared to the Croft. Similarly, the attack.  Plentiful and fine, the tannins cradle the fruit and, rising in a spicy, tensile, graphite arc, cloak the finish.  The dark, brooding core of blackberry, with hints of blackcurrant/blackcurrant bud fruit, powerfully intense, with terrific  juicy persistence.  Notes of esteva, liquorice and bitter chocolate bring nuance. Unleashed on day two, the dynamic tannins  – fine but firm, very tensile – cut a swathe through the wine, making for a mouth-coating, long, impressive finish with lashings of liquorice.  Concentrated, powerful, an excellent vintage for this second Vintage Port – very Fonseca in its bold fruit, structure and complexity.  4,700 cases The 2018 vineyard cycle was unusual and had a marked effect on the character of the wine. The previous year had been very dry and hot and by 15th January nearly two thirds of the country was suffering from drought, the Douro Valley being one of the worst affected areas. Luckily, heavy rainfall in March avoided damage to the vines and replenished ground water reserves. The growing season from March until the end of June was relatively cold and wet, bringing mildew in some areas. Devastating hailstorms on 28th May caused extensive damage to vineyards in the Pinhão area, including Taylor’s Quinta do Junco.

The development of the vines was about three weeks behind that of 2017, flowering occurring in late May and véraison in the last week of July.  Dry, warm conditions prevailed throughout July followed by a wave of very intense heat in August. On 3rd August, the weather station at Taylor’s Quinta de Vargellas recorded a temperature of just over 44°C. The extreme heat allowed the vines to make up some lost time and the abundant groundwater accumulated earlier in the year meant that, in spite of the hot conditions, ripening of the crop was gradual and balanced.

Picking at Quinta de Vargellas began on 17th September in hot, dry weather which continued for the duration of the harvest.  Yields were very low and winemakers’ notes report that the new wines displayed elegance, freshness of fruit, good acidity and intense colour.

A deep, inky hue, the nose exceptionally tight  – its smells of tannin and minerals.  Adopt the brace position, I thought, prior to partaking.  Sure enough, a touch velcro, the tannins are palapable.  But they are not aggressive.  Rather, tightly wound, like the blackcurrant, making for a rather inscrutable palate, the spirit savoury, a little proud on the attack and into the mid-palate.  It comes together going through.  Sluicing, fresh acidity teases out notes of crushed stones, spearmint and sage.  The fruit sweetness brings a sweet overlay to the finish, balancing the mouth-coating cocoa dust tannins.  With time in glass, violet top notes emerge.  On day two, the acidity seemingly buoys the fruit, the tannins, the guiding backbone.  Great intensity, juice and flow within the tannin structure to the polished blackcurrant, with its minerals, floral and herbaceous notes.  Bridge describes the acidity as ‘wiry,’ which captures it well.  The tannins clasp the wine on the finish, making for a classic Taylor’s dryness, austerity.  A keeper.  7,800 cases