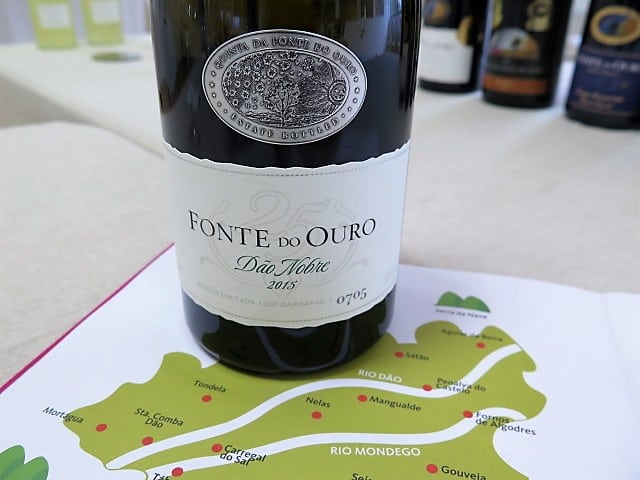 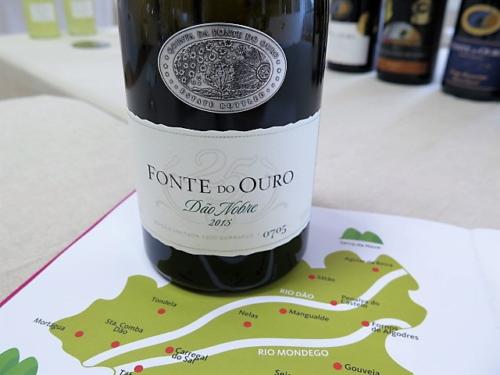 Last month, I discovered that the Dão’s certification tasting panel is super tough.  Nobre (noble) status – the highest accolade which can be given on certification – has only been awarded twice in 20 years!  No wonder I’d not heard of it before.  That and the fact that this distinction was first awarded in 2016.  For such a quality-focused region, this stunned, next rendered me speechless, when I learned that the threshold for Nobre status is (only) more than 90 points.

I tasted both Nobre wines during last month’s visit to the Dão.  Without a hair out of place – uncommon polish – these wines showcase exemplary winemaking.  Qualities which Boas Quintas and Global Wines reliably offer, from their flagship Nobre limited edition wines to entry-level.  In this post I take a look at Boas Quintas’ tip top Nobre white wine together with my pick of their extensive portfolio.  Next week I write up Global Wines’ Nobre red and highlights from their range. 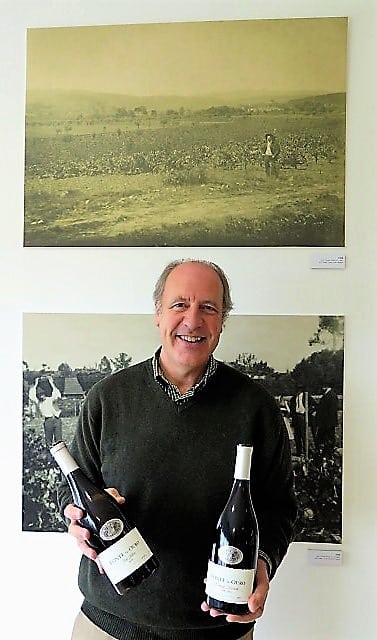 First a bit of background.  Nuno Cancela de Abreu’s great grandfather, João Tavares Festas, made wine in the Dão but the softly spoken founder of Boas Quintas is the only one of eleven siblings in his family to maintain the tradition.  Having studied wine in Lisbon, he completed a Masters in Viticulture and Oenology in Montpellier, France.  His academic bent then took him to the Douro where, between 1981 to 1987, he led pioneering research at ADVID, working closely with João Nicoalu de Almeida at Quinta de Ervamoira (the home of Ramos Pinto’s Duas Quinta label).  Unsurprisingly, given the strength of his white wines in particular (including the Nobre), Cancela de Abreu followed his time in the Douro with a stint at leading Bucelas winery, Quinta da Romeira (Bucelas DOC is exclusively for white wines made from at least 75% Arinto).

Whilst at Romeira, he received an award in the National Competition for Young Portuguese Farmers, enabling him to re-establish winemaking roots in the Dão.  In 1991, he established Boas Quintas, planting the first of two vineyards and renovating a small winery in the old family house in Mortágua in 1991.

The original Boas Quintas vineyard in the westernmost Besteiros sub-region is located at 140m on clay and limestone.  Though relatively low for the Dão, a big dam nearby influences the climate, resulting in more humidity, even in summer when, says the winemaker, morning fogs are common. It lends a little more acidity and freshness to the wines, he adds.

The other vineyard is in Nelas, in the Terras de Senhorim sub-region just to the east of Besteiros, where the soil is sandier/granitic.  Qualities which, he observes, enhance minerality and freshness.  Still, the climate here  is a little warmer with less humidity, so it is generally better for reds.

Cancela de Abreu’s whites are Encruzado-based since, even in hot weather, this leading local grape always maintains good acidity and retains great minerality.  Observing that “the acidity is always perfect, with a pH of 3.2 or 3.1,” he told me that he has never corrected acidity in the Dão, even in the reds.  Describing Dão wines as having “balanced acidity and alcohol,”  he attributes this to the mountainous, inland region’s pronounced diurnal where, “even in the [very hot, drought-stricken] summer of 2017, the diurnal temperature variation was some 22 degrees, producing sugar by day and retaining acidity by night.”

Boas Quintas wines are imported into the UK by Oakley Wine Agencies.

This entry level white – a 60/40 blend of Encruzado and Arinto – is sourced from both quintas.  According to Cancela de Abreu, he has the only Arinto vines in the region. Influenced by his time in Bucelas, Lisboa and the similar (clay/limestone) soil profile at the original Dão vineyard, he planted the grape 10 years ago.   The aim is to marry Arinto’s citric fruit/backbone with the Encruzado’s more voluminous white fruit profile.  It works well, making for a juicy, fruity, very clean, persistent white.  The emphatic fruit (citrus and white peach) balances the freshness well, offering a friendly introduction to the Dão. 13%

Unoaked, this Encruzado shows clean, fresh but creamy (something of a Cancela de Abreu hallmark), fleshy white fruit with a touch of citrus and the resin/pine needle which is a tell tale trait of this grape.  Nice balance which, for the winemaker, defines Encruzado, which he descries as “not exuberant, but elegant.” Well made simple but true example of Encruzado. 13%

This Encruzado comes from 25/26 year old vines on granitic, loamy soils at 280m (Nelas). Moving up a tier, it underwent pre-fermentative skin contact (a traditional practice in Portugal); after pressing, it spent four months ageing on lees in new oak barriques with twice weekly batonnage.  Like Chardonnay, Encruzado is very malleable, so it responds well to less-ageing, batonnage and oak.  With its smoky oak, savoury sour dough and bacon fat nuances, this more voluminous, complex wine would appeal to Chardonnay lovers, though I’d be inclined to give it a little more bottle age to allow the smoky oak to integrate a little and the fruit to come up.  Ideally, Cancela de Abreu told me, he would prefer to sell it with two years’ bottle age.  With good underlying acidity, it has all the makings of a nice white for mid-term ageing. 13.5% 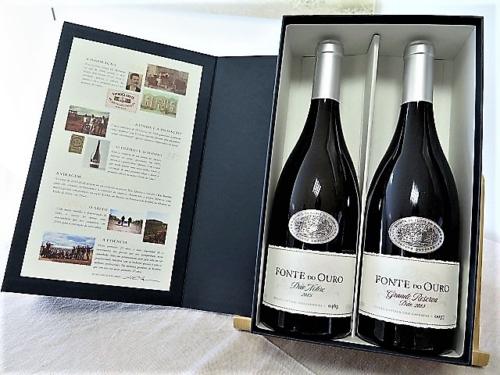 Thus far, this is the only Dão white to achieve Nobre status.  The limited edition 1,200 bottle cuvée was made to celebrate 25 years of Boas Quintas.  Pleased though he rightly is about the recognition, Cancela de Abreu believes the tasting panel are too strict.  I must say there are more than a few Dão whites which I would award (and, for Decanter, have awarded) more than 90 points and I consider myself (and have been told!) I am a tough scorer!!  In fact, given that this website focuses on highlights from my tastings and tours, you can expect by far the majority of  wines to be of 90 point plus status from my perspective.   The fruit is sourced from granitic, loamy soils.  Aged on the lees for 6 months in 100% new French oak with batonnage, Nobre is a blend of 95% Encruzado with splashes of Arinto (2%) and Cerceal (3%) “for salt and pepper.”  Smoky oak with engaging lime oil/zest complements Nobre’s minerality.  With lovely intensity, impetus and mouthfeel to its creamy, silky white fruit, this lingers long in the mouth, the finish crystalline, very pure. Power and grace, a delicacy even, with an accessibility which distinguishes the Boas Quintas brand. There will be no Nobre in 2016, but Cancela de Abreu is excited about the potential of 2017 (which he rates over 2015); barrel samples of 2017 Encruzado showed power and intensity.  13.5%

A Touriga Nacional-led (50%) blend with Tinta Roriz, Alfrocheiro and Jaen, sourced from granitic soils.  It has a touch of reduction on the nose but the Alfrocheiro comes through loud and clear showing juicy red, black-pepper-laced strawberries with Touriga’s perfumed white flowers and red and black fruits. Smoky plum from the Tinta Roriz.  It has a quality which I often find (and can only recall finding) in the Dão – a touch of earthiness with day old hearth (ash) notes. A classic hint of green too, though the tannins are ripe but present.  Cancela de Abreu observes that, since the seeds didn’t ripen well and were still green, he sieved them out during remontage (pump over) on the first day.  Following a long fermentation with gentle extraction, after the malo-lactic fermentation, 50% of this wine aged for 9 months in French Allier oak barriques.  Nice complexity and varietal/regional expression.  13%

This older Reserva 2005 showcased the age-worthiness of this wine.  Still fruity and supple – rich and smooth, a little jammy even, with balancing smoky, savoury rusticity.

Unlike the Douro which experienced intermittent rain during September, the Dão remained dry and it was a very good year.  This deeply coloured, full-bodied Touriga Nacional is very well made, if a little commercial (I prefer a more elegant expression.)  But there is no denying its upfront appeal – Cancela de Abreu likes very ripe tannins, so the fruit (sourced from granitic soils) was picked at the riper end of the spectrum, plus 20% of the juice is drained off for a (saignee) rose and it was aged for 12 months in 100% new French oak, ratcheting up the sweetness.  Ticking the Touriga boxes it has bergamot with supple, concentrated red and black fruits and smooth, chocolatey tannins.  13.5%

This older vintage from the ‘big in everything’ 2011 vintage is rich and ripe with lashings of bergamot, plum and blackberry, the oak, quite chocolatey and mouth-coating.  Tertiary characteristics are developing and the finish has a pronounced spicy, menthol character.  A bit of a beast!

This Grand Reserva – a blend of Touriga Nacional, Tinta Roriz, Jaen from granitic soils – is the pigeon pair of the Nobre white 2015.  It was released to celebrate Boas Quintas’ 25th anniversary and attained 87 points versus the white’s 93 points from the Dão CVR tasting panel.  It’s a lovely wine, capturing the elegance, lift and layer which I like to see in the Dão.  Fine, striated tannins and fresh acidity tease out the bright, lingering red and black currant and berry fruit, together with floral, pine needle and smoky nuances.  Lovely perfume and delicacy in the mouth.  Really accessible already and very delicious, it showcases this difficult, fresh year well.  After a three day cold soak, the de-stemmed grapes were fermented with a long and gentle maceration with delestage (rack and returns). The wine underwent malo-lactic fermentation in new French Allier oak barriques, where it aged for 18 months. 13%