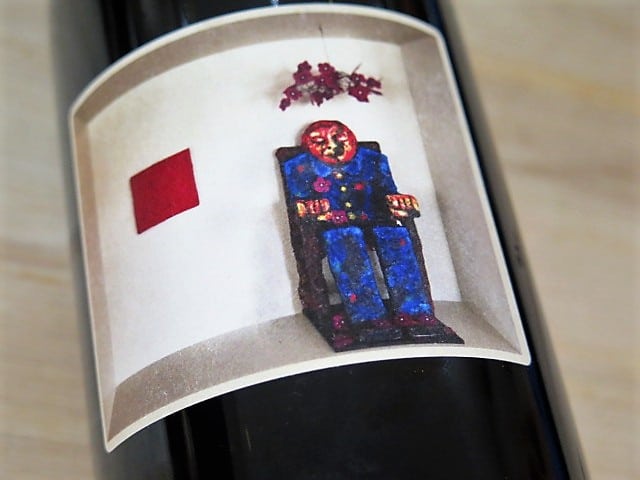 Great wine is art, craft and, oh yes, graft.  All words which well describe Garry Crittenden’s contribution to the genre.  So Big Chair is a fitting name for the “hush hush” small batch (550 bottle) Pinot Noir which this small, wiry winemaker packed me off with after my visit to Crittenden Estate last month.  David Hockney produced a work of that name – art, displaying craft.  A place to rest weary bones after heavy graft (though, as Big Chair Pinot Noir’s label suggests, Crittenden is a doer, a restless spirit).  And Hockney sprang to mind again when Crittenden sent me the accompanying video for today’s launch of Big Chair. As he puts it, “it’s not so much a video as a video look-alike made by stringing ‘bursts’ of fast shutter action stills.”  A little bit like Hockney’s polaroid collages. 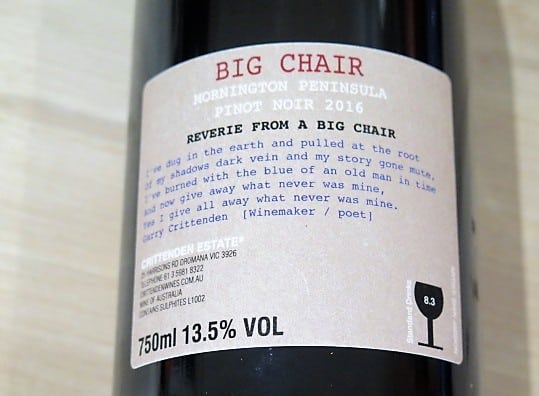 “Burned with the blue” – Garry Crittenden the poet

The pair certainly share a serious work ethic and creative energy.  As Walter Speller wrote in this detailed article on Jancis Robinson’s website, Crittenden was the instigator of a groundbreaking book called ‘Italian Winegrape Varieties in Australia,’ which challenged the French varietal status quo down under.  Together with his son Rollo, Crittenden made Iberian varieties the next port of call, including Albarino/Alvarinho.  Or so everyone thought.  It turned out to be Savagnin, but that story ended well. Rollo’s Jura-style Sous Voile example – Crittenden Estate 2013 Cri de Coeur Savagnin – won the trophies for Best French Varietal and Best White Wine of Show at The Australian Alternative Variety Wine Show 2017; check out next Friday’s post for my report about the making of this genius, delicious wine.  Like father, like son.  And Garry continues to pull rabbits out of hats, such as the 2004 Melon [de Bourgogne], pictured.  Very good it was too.  Youthfully fresh with the peachy fruit good Muscadet picks up with bottle age; even a saline note. 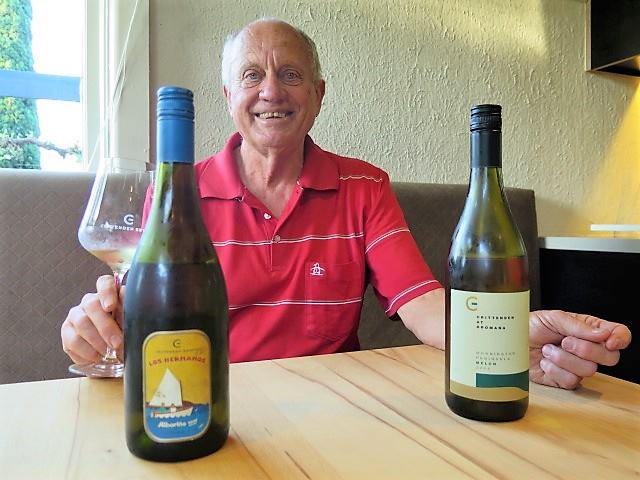 Doubtless, Brisbane-born Crittenden’s love of pushing the boundaries of propagation stems from his first career as a horticulturist.  Self-made, his Mornington Peninsula nursery did well, enabling him to make the leap into wine and buy land in Dromana in 1981.  When he planted Crittenden Estate’s first vineyard in 1982, he promptly doubled Mornington Peninsula’s land under vine. 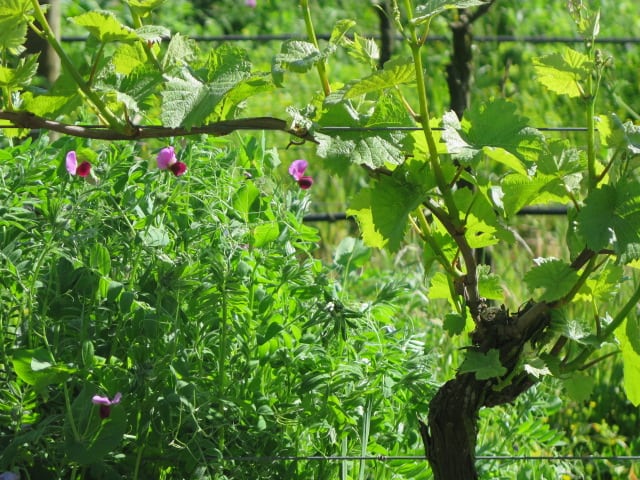 By the time he made this 2012 video (below), which celebrates his Melbourne Food & Wine Festival ‘Wine Legend’ award, Crittenden said “I began to acknowledge that I’m not immortal and will eventually relinquish control of the family company.”  Having handed over the winemaking and marketing reins to Rollo and his daughter Zoe (pictured right below with Garry’s wife, fellow powerhouse, Margaret), handover of the business is on his mind.  However, he told me, Big Chair reflects a longing “for a hands on role with my antiquated small batch ideas.”  From 2016, about two tonnes of Estate Pinot fruit each vintage will be ring-fenced for Garry to “make the wine my way and without intervention.”  Check out the video look-alike here and you’ll see what he means – this naturally fermented Pinot Noir was personally foot-stomped in 500kg bins and basket pressed….as artisanal as it comes!

The fruit for this first 2016 release comes from what Crittenden himself describes as “the mediocre D2V5 clone located just behind the winery building” (in 2017 he has used MV6 and, he says, hopefully the Pommard clone in 2018).  Described as sometimes herbal and thin (it can over crop), the winemaker told me “we have discovered over the years that D2V5 will impart subtle aromatics but otherwise can lack grunt.”   At Crittenden Estate the 25 year old vines are pruned to a single cane guyot system and, says Crittenden “crop at a tad over 2 tonnes per acre or 35hl/hectare.” With 70% (well lignified) whole bunch (and a year in older French oak barrels), it makes for a pale but jewel-bright ruby/garnet wine of contrapuntal firmness and delicacy, with subtle chinato and orange peel notes to its al dente red cherry and raspberry fruit, a lick of saline too. I liked it very much.  Lovely freshness and detail, the tannins ever so gently punctuating, but never drying.  Commas not full stops.  Made to a style which Crittenden is confident will cellar well for up to 20 years he reported, “I opened a 1988 Pinot I made using the same parameters recently and it stunned the audience, who had no idea of its provenance or age (they all thought it was younger and French….]”  With its emphatic freshness and definition, Big Chair 2016 certainly wears its alcohol (13.5% abv) effortlessly. 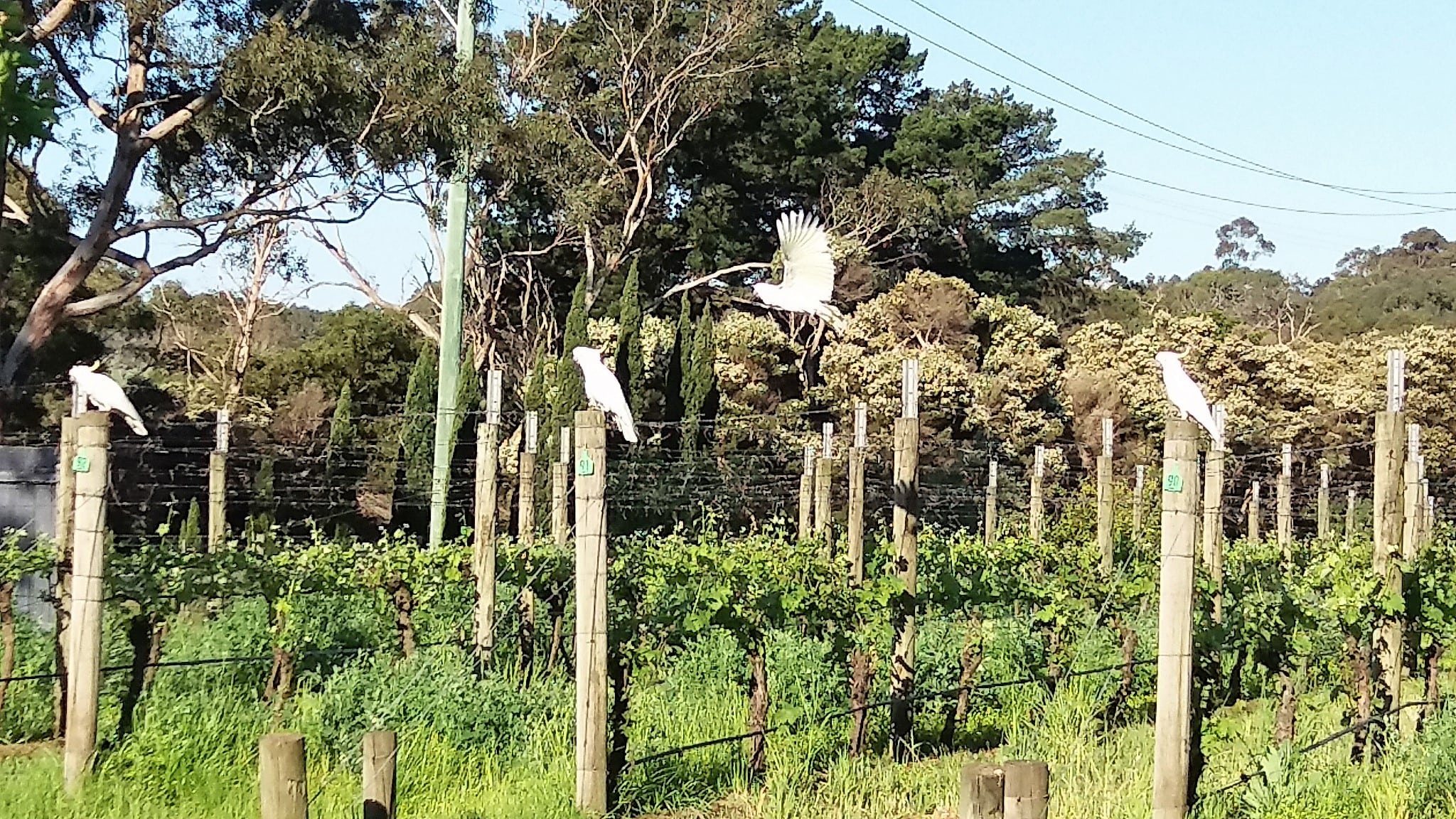 For Crittenden, Big Chair represents “a small slice of my history and my heritage” and, after I tasted it, I asked him about the Nebbiolo-like chinato, contrapuntal and orange peel characters I found in this wine, his love for which shines through in the 2012 video (he describes Nebbiolo as “the greatest grape.”)  On orange peel notes, he told me “we regularly see them from this vineyard, could be a terroir character?”  As for the contrapuntal, Crittenden’s answer was revealing.  He said, “what fascinates me about Nebbiolo is the paradox it presents in winemaking: poor colour and colour intensity with overt tannins provide a conundrum; how to deal with two conflicting and inimical characteristics. It requires more intellectual input than any other red I’ve dealt with.  That’s why I like it so much.”

Garry Crittenden Big Chair Pinot Noir 2016 underwent 70% whole bunch fermentation in a 500kg picking crate with a de-stemmed whole berry portion on top.  There was no S02 at this stage, so this was just to form a protective layer together with a plastic shroud to seal the “cap” from air.  Following an 8 day cold soak in a cool-room without intervention at 10 degrees, the wine was foot stomped at 0.9 Be and (naturally) fermented for 5 days (peaking at 29 degrees), followed by an 8 day post-ferment maceration prior to being basket pressed.  It was then aged for 12 months in 2 older French barriques.

Priced at around $50, Garry Crittenden Big Chair 2016 yielded roughly 550 bottles and, says Crittenden, “will have very limited distribution to friends and long-time supporters.” It would seem he has a fair few. Just this week, Crittenden received the Mornington Peninsula Regional Tourism Legend Award.  Twice a legend in your own lifetime (and counting!)  Not bad going for the Brisbane lad made good.