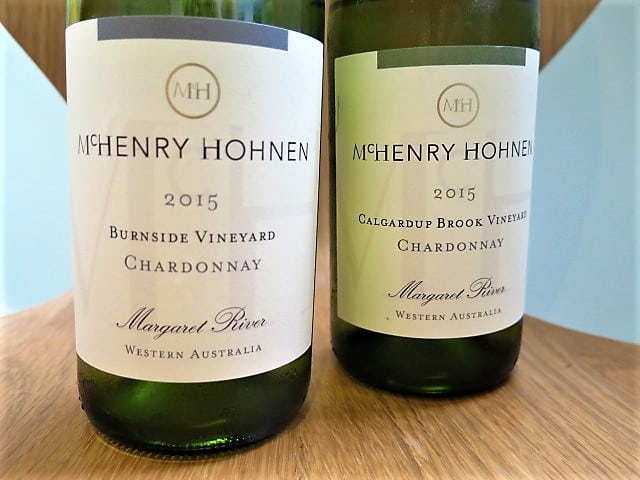 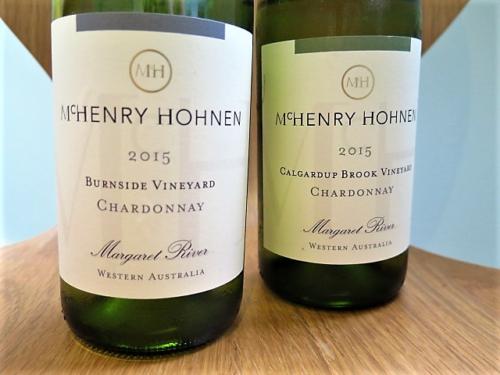 The festive period is a little more focused around drinking than tasting, but why not push the boat out and do both?  This 2015 single vineyard Margaret River Chardonnay double act from McHenry Hohnen makes terrific drinking now, offering lovely complexity and length for the price point, whilst putting your taste buds to the test.  Can you pick out the cooler site?

Doubtless though he didn’t make them, McHenry Hohnen’s new Chief Winemaker can.  In common with Bellwether’s Sue Bell (coincidentally the subject of last Friday’s post), Julian Grounds was awarded the highly prestigious Dux of the Len Evans Tutorial.  Doing the exact opposite of his last boss, Giant Step’s Phil Sexton, Grounds left the Yarra Valley to make wine in Margaret River this vintage.  Giant Steps are all about single vineyard wines, so the local lad has seized the opportunity to put Western Australian terroir under the microscope while, he told me, co-founding winemaker David Hohnen “is stepping back to concentrate on a few of his other ventures (his farming and butchery among those).”

Incidentally, Hohnen features in four evocative “50 Years in the Making” videos celebrating Margaret River’s 50th anniversary of modern viticulture and winemaking.  Here is a link to the first; the other three follow directly after the first.  For members of the trade, I’ll be lifting “50 Years in the Making” off the page in three Margaret River masterclasses at the London, Edinburgh and Dublin Australia Day Tastings in January.  My whip-smart line up includes Vasse Felix’s new flagship Tom Cullity, already onto its second 2014 release – time waits for no-one!   You can find registration details here.

My notes on the wines follow below, first a word from McHenry Hohnen on vintage and winemaking: “Our 2015 harvest broke records on various fronts. A mild winter resulted in early bud-break, exposing sensitive young shoots to wild early spring conditions resulting in a significant reduction in yields across all varieties.  A warm and dry summer set us on the path to two distinct harvest periods for white and red varieties; we experienced our earliest Chardonnay harvest to date with all three vineyards picked and fermenting two days earlier.  A significant rain event mid-February delayed ripening of reds, however, due to low yields the rewards were full tannin ripeness and flavoursome wines. It was a challenging season that saw bushfire smoke, masses of hungry birds and significant rain events make for an edge of your seat ride that has produced stunning wines across all varieties – albeit on a much reduced volume!”

As for winemaking, both wines were made from Margaret River’s signature Chardonnay clone – Gin Gin.  Hand harvested grapes were whole bunch pressed direct to barrel (20% new, all french oak) and naturally fermented with no additions (of acid, yeast nutrients etc).  The wines, which did not undergo malolactic fermentation, were aged on the lees in barrel with batonnage. They were bottled following the addition of sulphur and a light bentonite fining. 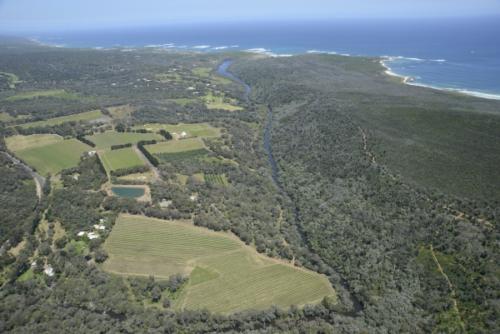 The Burnside Vineyard is located a short distance from the Indian Ocean, on the sharpest bend of the Margaret River (pictured foreground).  The land was purchased in 1976 and, subsequently planted to 11 hectares of vines; it is home to McHenry Hohnen’s oldest Chardonnay vines.  A complex nose and palate reveals flinty, slightly bruised golden delicious apple and very silky, pure white peach with a touch of rock melon as it opens up (very Gin Gin).  Elegant, well-integrated acidity makes for a seamless, almost creamy, glide of fruit with vanillin and savoury toasted spices, cashew and sour dough notes going through.  Persistent, very well balanced.  Very good.  13.5% RRP £21.99 BI Wines & Spirits, Just in Cases, Oz Wines, Wine Direct. 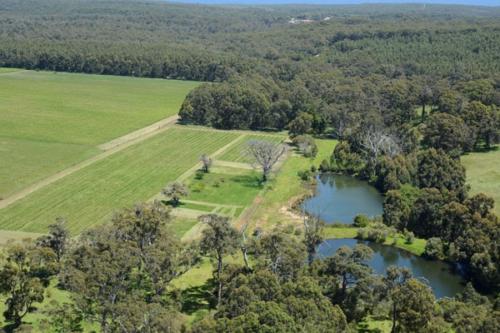 I tasted an impressive vertical of Calgardup Brook Chardonnay when I visited McHenry Hohnen in 2009.  Hohnen attributes this wine’s tauter style to the vineyard’s location down by a brook.  Planted in 1995/96, the site is shaded from the last hour or so of afternoon sunshine. Made in the same way, Burnside and Calgardup both show restrained, flinty nuances, savoury sour dough, silky lees work  and toasted spices.  However, while the Burnside vineyard puts the emphasis on stone fruit, the cooler Calgardup Brook vineyard produces a firmer, more citrus-driven Chardonnay with grapefruit and lemon as well as pear fruit, snappier, mouth-watering acidity and a subtle green (lemon verbena?) and saline, mineral edge.   Long and lively.  Very good.  13.5% RRP £21.99 BI Wines & Spirits, Oz Wines, Wine Direct.