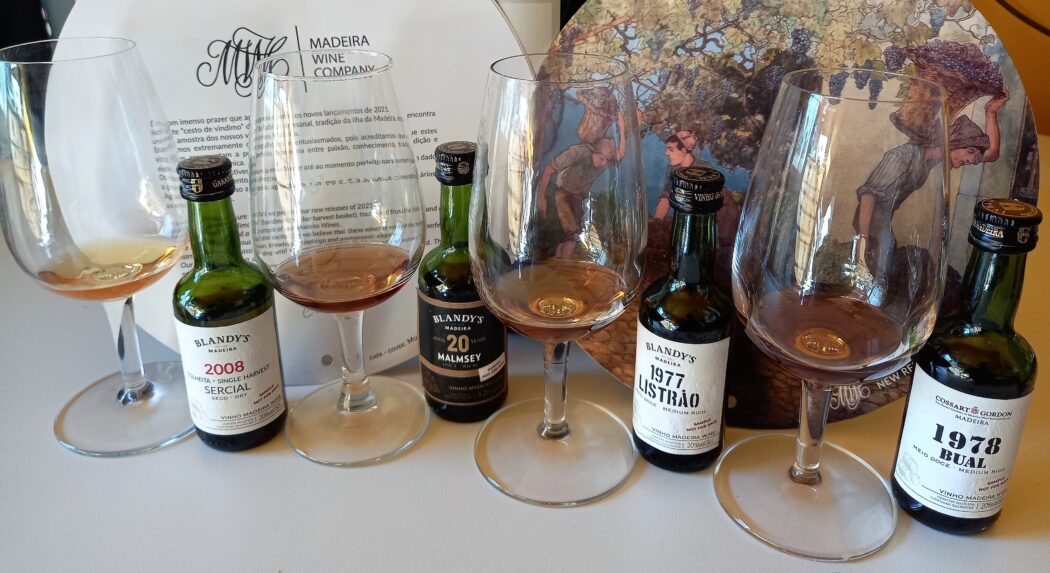 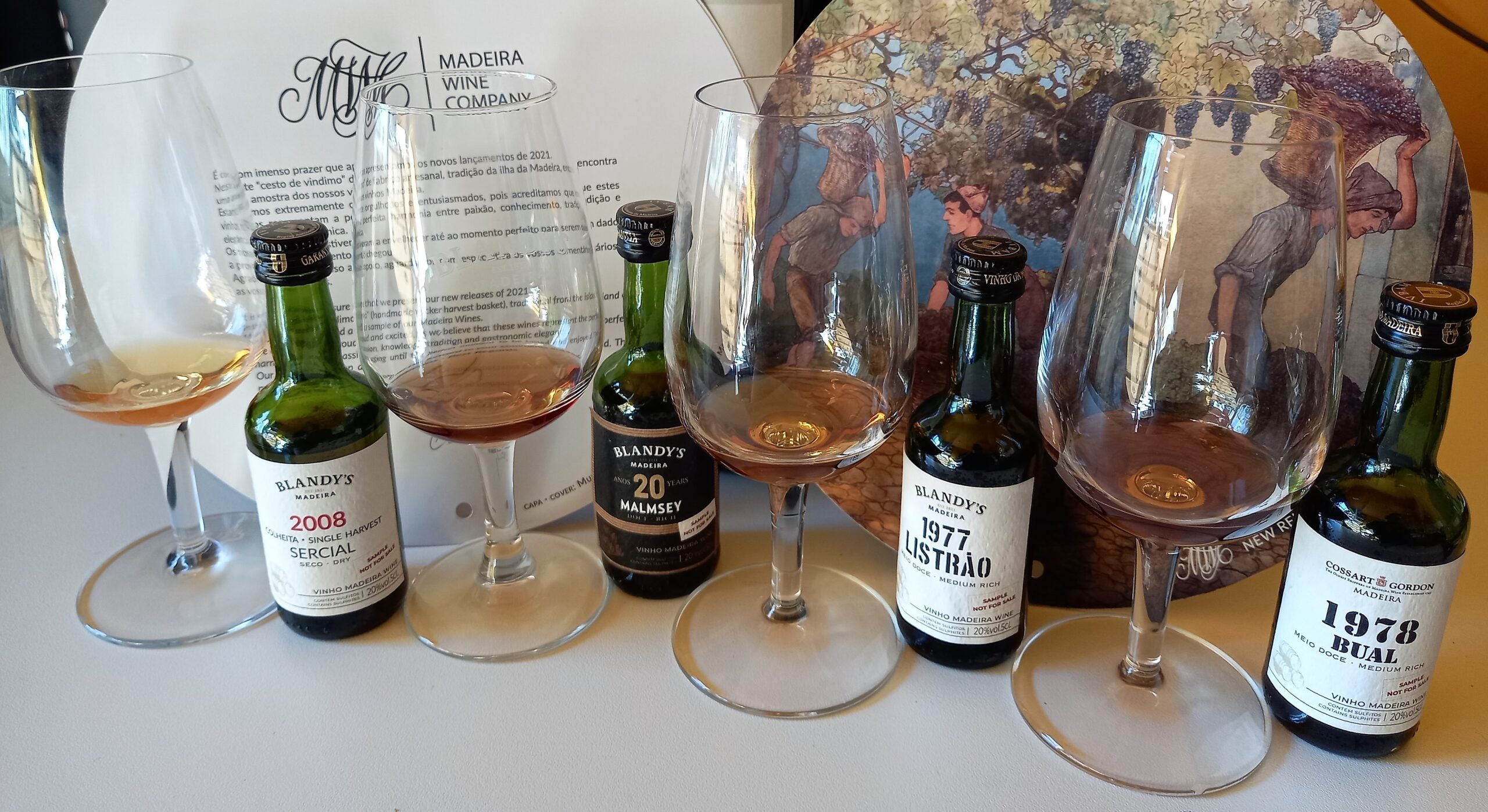 As usual, Madeira Wine Company’s 2021 releases are exemplary.  Departing from the norm, this year’s four Madeira releases include a rare as hen’s teeth ‘out of the box’ Listrão from the island of Porto Santo.  And a Madeira whose provenance even foxed the insiders.

You will find my reviews of these Madeira wines below.  My tasting notes are preceded by notes about each Madeiras’ sourcing – the terroir.  They are based on the technical information provided and a Zoom discussion hosted by CEO Chris Blandy and Francisco Albuquerque, Chief Winemaker.

As reported in my post about the 2020 releases, Blandy’s current plans include introducing single vineyard/single estate Madeiras, principally sourced from the family’s own properties.  So it interesting to see that increased focus on terroir coming through louder in the information provided (and see the map below – a screenshot from this informative page of Madeira Wine Company’s website). 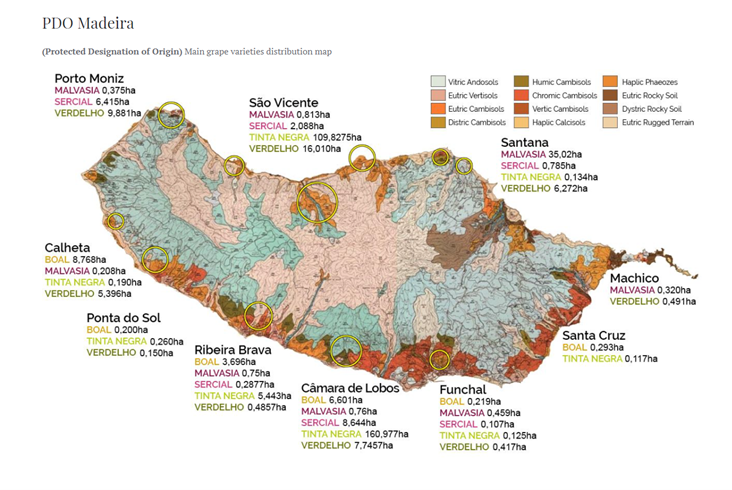 Picking up on that last post, Blandy gave an update on the 2020 harvest which, he remarked, “was probably the largest harvest in the last 10 to 15 years.”  A challenge, it being 2020.

He described conditions in the north of the island as “more complicated” – Malmsey and Tinta Negra yields were hit by rot in São Jorge just before harvest, “so very careful picking” was the order of the day.  Whilst challenging, the outcome was very good.

Blandy is also very happy with the quality of Blandy’s light white wine, made under the Atlantis label (from Verdelho).  Two cuvees are now made.  Albeit from a small base, light (Madeirense DOC) wines are on the up in Madeira.

In other news, Blandy mentioned that the company is gunning for sustainability certification.  Watch this space, he said.

Madeira Wine Company’s portfolio is imported by into the UK by Fells.

Terroir: sourced from Pomar Novo, in Jardim da Serra above Camara de Lobos, in the south of Madeira.  On average, temperatures were lower and the harvest was small in 2008.  Blandy remarked on the relatively low residual sugar for Blandy’s (which is renowned for “explosive” higher sugar and higher acid wines, he said).   Looking at Blandy’s website, I note that previous vintages of the Single Harvest Sercial have had around 55g/l  residual sugar versus 40g/l in 2008.

My tasting note: Bright saffron gold with iodine pungency to the nose and palate and light leafy tobacco, sencha and hops notes.  Gentle (sucking) barley sugar sweetness too, especially on the nose.  In the mouth, it is firm and dry, incisive – well-focused – seemingly gathering speed on day two, when it exhibits rapier-like steely grapefruit and a salt and iodine smacked finish.  Chilled, I can imagine it pairing really well with gravadlax.  40g/l residual sugar; 2,000 bottles are being released this year.  Blandy noted that there is lots still in barrel, where it will age for 20 years plus for release as a vintage wine.   20% vol, 8.7g/l TA, 0.60g/l VA, 40g/l Residual sugar. RRP £50/50cl

Grape & terroir: Tiger’s Eye in hue – golden brown (texture like sun?)  Known as Malvasia-Rei on mainland Portugal or Palomino-Fino in Spain, Listrão is exclusively sourced from the rather warmer terroir of Porto Santo island.  With its sandy beaches to the south, Porto Santo island is a top August holiday destination for Madeirans, said Blandy.  Sand and clay soils with aluminium silicates produce a unique terroir, he added.  Vines are planted close to the ground and surrounded by ‘crochet’ walls, to protect them from the wind and sea breeze.  In consequence, he said “wines are sweeter and have less acidity.”  Blandy’s 1977 Listrão is the only example of the variety in the company’s considerable back catalogue and, said Blandy, this special release celebrates the 210th anniversary of the family marque.  The grapes come from one of the last vintages, if not the last harvest from William Leacock’s estate, Quinta do Ribeiro Salgado.  According to Albuquerque, today only 3ha of Listrão remain on Porto Santo; they are divvied up between 38 growers.

My tasting note:  I found this wine thoroughly intriguing.  Mostly on account of its mouth-filling but surprisingly delicate qualities.  Perhaps the relatively low acidity and sweetness (although this Listrão is vinified medium dry) contribute to that more mouthcoating quality.  Fanning outwards, it forms the shape of a smile in the mouth versus Madeira’s linear rapier charge to the back palate.  As for its insinuating aromatic and flavour profile, lifted jasmine and tobacco notes and the merest hint of buttermint mingle with green tomato, white sultana, yellow plum, sweet mirin, warming sake and a lick of salt and smokier iodine to the lingering finish.  A gentle rub of tannin and harmonious acidity buoy the flavours along.  Saying he has never seen anything like it, Albuquerque explained it is very, very delicate at the same time as exuberant because of the warm volatile note and salinity on tongue.  The saline note is, he said, typical of Porto Santo, “because there is always influence of winds.”  The winemaker also remarked on the relatively elevated acidity – “high for Listrão.”   Just 751 bottles were produced.  20% vol, 8.75g/l TA, 0.90g/l VA, 90g/l Residual sugar.  RRP c. £250/75cl

Terroir: Malmsey thrives in Cambisol soils, which are thick, with a fine texture and medium organic matter.  Characteristic of the south of the island, they are also found in São Jorge, Santana, on the north coast, where plantings have expanded because temperatures are lower, being influenced by the mountains and strong maritime winds.

Terroir: The grapes come from the area of Calheta, the warmest and sunniest area on Madeira island.  The influence from the sun, sea breeze and wind is strong, resulting in highly balanced acidity and sweetness.  The vines – planted in the trellis and espaliers system – grow between 100 and 300m altitude.  The soils are deep clay, with a medium content of organic matter.  They are low in phosphorous, with a medium high level of potassium and very rich in calcium and magnesium.

My tasting note: Marked volatility (which corresponds with the analysis); piercing passionfruit notes parry with singed tarte tatin and molasses notes.  Shifting into savoury mode, with dried honey the sheathing segue, coffee, spice and rich, woody notes explode on the palate.  And, like an explosion, reverberate spicily, with plenty of woody, nutty walnut timbre/beeswax polish and cigar.  Tasted blind, Blandy confessed he though this Bual from Cossart Gordon came from the Blandy’s stable.  Nay.  For Albuquerque, it is complex and concentrated for a wine from 1978.  On a blind tasting, he would have placed it in previous decade.  Both felt it tasted drier – perhaps 75g/l residual sugar.  The winemaker concluded, “it is one of the great Buals bottled in the last years,  so I am very happy with this wine.” 1,294 bottles released.  20% vol, 8.51g/l TA, 1.11g/l VA, 105g/l Residual sugar.  RRP c. £255/75cl