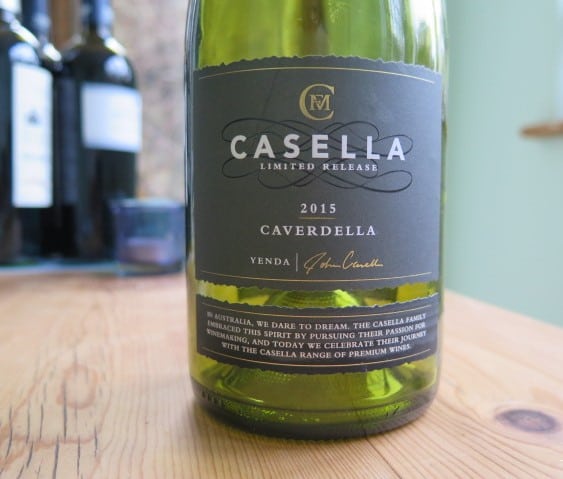 Australian alternative varieties – new to me Caverdella, from Casella 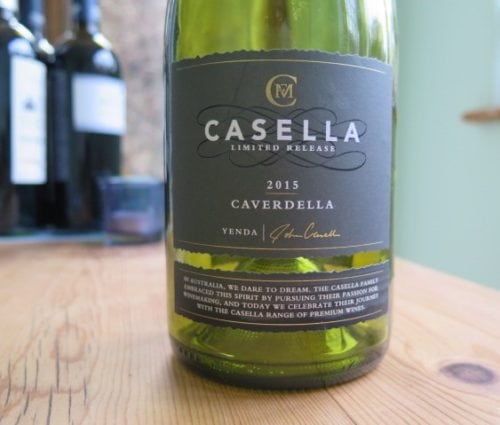 Two surprises for me, maybe for you too?  I produced this rabbit from the hat which was the sponsor’s goody bag at The Australian Alternative Variety Show.  Surprise one – a wine made from Caverdella – never heard of it.  Surprise two – that this esoteric grape/wine came from the producer who created the über-populist brand, Yellow Tail.

In and amongst judging and travels, I didn’t manage to taste it until I got home.  Apart from the back label, I’ve failed to discover much about it.  Only a reference in a 2012 edition of Grapegrower & Winemaker to Caverdella first making its debut in The 2012 Australian & New Zealand Wine Industry Directory alongside the likes of Brachetto and Gruner Veltliner, among others.

But unlike Brachetto and Gruner Veltliner, Caverdella appears to have been a completely new discovery for the genetic testers.  Here’s the low down from Casella’s back label:

Doradillo grapes are ordinarily harvested last, at the end of April.  Filippo Casella noticed that some vines not only looked different but were also less mature than the Doradillo.  His hunch was confirmed when the grapes could not be identified; with many decades of grapes being genetically tested, the result was “no known match.”  This new and original variety was named Caverdella – Ca from Casella, Verdella from the very green hue of the grapes.

Here is my note on the wine:

The back label draws an analogy with Semillon on account of this pale straw wine’s ability to age gracefully, with its “crisp acid balanced by distinct honey, lemon and buttery characteristics.”  With green glints, crisp acid and an inflection of lemons and herbs (here dried) – a certain neutrality at this early stage of its life – I can understand the Semillon reference.  A touch of potato peelings puts me more specifically in the Madeira clone family of Semillon camp, while tertiary textural and flavour nuances – an incipient nuttiness –  reminded me of some of the Semillons I tasted in South Burnett, Queensland, where the growing cycle is swift. So this wine was something of a journey in a glass!  I’m not convinced it has mainstream appeal, but I suspect that’s not the point of this wine.  11.5%

It’s always good to see the envelope pushing and reinvention down under.  Vis a vis Casella, I might add, that journey has involved adding venerable brands Peter Lehmann, now Morris of Rutherglen fame to their bow, the latter much to fellow judge and fortified nut Simon Killeen’s delight.  Good to hear.  I’m a big fan of Morris Wines’ fortified Muscats and Muscadelles.

No doubt there will be more surprises in store at next week’s Australia Day Tasting for the trade in London.  With 1000+ wines, 220 wineries and 80 exhibitors, I’m told it’s the biggest yet.  Sticking with the reinvention theme, I’ll be presenting a McLaren Vale Grenache Masterclass showing off new wave examples which, last week, prompted Max Allen to take flight (stir a fight even) in his first wine column for Australia’s Financial Review.  The wine writer – always an astute commentator on industry trends – suggested that, since Grenache “captures the unique combination of country, climate and culture in a glass,” it might be a better option than Shiraz in Australia’s warm climate regions.  Let’s see what my audience think.