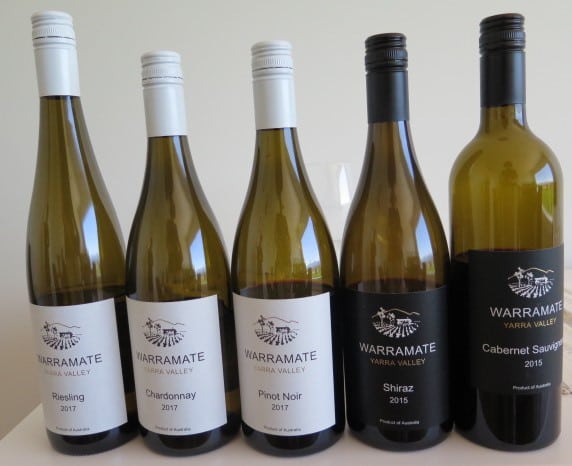 My February visit with Yarra Valley Wine Women provided an opportunity for an extensive tasting with Sarah Crowe at Yarra Yering in Gruyere, the Yarra Valley.  Yarra Yering’s tasting room (and winery) also play host to sister-label Warramate, whose wines  are more forward in style.  So that’s where I’ll start; my report on the Yarra Yering wines follows in next Friday’s post.

Located next door to Yarra Yering at 160-180m on silty clay loam over yellow clay, Warramate is named after the range of hills which rise above the vineyard.  Dry grown, it was established by Jack and June Church in 1970 – a year after Dr Bailey Carrodus first planted Yarra Yering – which makes it home to among the region’s oldest vines.

Warramate was acquired by the partnership which owns Yarra Yering in 2011.  I must say, at €28-30/bottle in Australia, the range punches above its weight, especially the reds and especially the Cabernet.  The wines are imported into the UK by Vindependents, which is owned by and represents leading independent retailers, so check out their website for likely stockists.

Riesling is a minor player in the Yarra Valley but, Crowe told me, the Churches planted 1.2 acres of it in 1970 because they were unable to secure Chardonnay cuttings. It is made in the classic, dry, protective style, albeit whole bunch pressed (since 2016 in a bag press).  It is a ‘softer’ expression than your typical Clare Valley or Eden Valley – think Pfalz versus Nahe – with a talcy, slightly soapy, lemon citrus-driven palate and a touch of phenolic green mango to the finish.  13%

The fruit for this wine is actually sourced from a multi-clonal selection of Chardonnay (95, 76, 124, 548) planted in 2012 on an old Yarra Yering Cabernet block.  It shows light nougat and oatmeal inflections to its creamy white peach fruit.  A pithy lemony note adds tension and interest.  This medium length, easy-going Chardonnay was whole bunch pressed and barrel-fermented on light solids; some clones were aged in stainless steel while others spent nine months in oak, 20% new.  Very pleasing.  13%

This Pinot comes from a multi-clonal 5 acre plot planted in 2000 (55% MV6, 18% 114, 18% 115 & 9% G5V15). Being situated at the most westerly position on the estate protects the vines from over-exposure to hot northerly winds & late-afternoon sun.  Location and process – an element of whole berry and bunch – make for a bouncy, immensely likeable Pinot Noir.  Crowe told me she can’t make enough of it.  Lovely wild flowers and red fruits – raspberries and strawberries – to nose and palate, with a hint of Cinzano and raspberry seed bite (some blend components saw 100% whole bunch).  Aged for 10 months in lightly worn 100% French Oak (20% new).  Smiley and delicious.  13.5% £21.95 at Noel Young Wines

Made from a blend of 1970 “old vine” (clone unknown) plantings and the 2000 “young vine” plantings (clones BVRC12, SA1127, 1654, ESA3021). It’s very much in the classic Yarra mold – medium-bodied, with juicy blackberry and fleshier plum which, together with fine tannins, make for nice fluidity – an evenness going through.   Light mocha, star anise and liquorice complex the finish.  A harmonious wine.  The fruit was de-stemmed and aged for 15 months in large format French oak – 300-litre hogsheads (10% new) & 500-litre aged puncheons.  13%  £24.99 at Hennings

Goodness.  If the Pinot Noir and Shiraz strike me as great value, with its detail and energy, the Cabernet knocks it out the park!  Fruit was sourced predominantly from a 2.3 acre plot planted in 2000 exclusively to the SA125 clone. The balance comprised Cabernet Sauvignon and a small amount of Cabernet Franc produced from the original Warramate 1970 plantings. A dusty, gravelly nose – a touch leafy (in a good way) going back – signposts a characterful, layered palate with fine, mouthcoating tannins.  Perfumed blueberry and more energetic, crunchy redcurrant lend impetus, teasing out pencil shavings/cedar and dried herb nuances.  A savoury piquancy puts me in mind of rare roast beef and horseradish.  Delivering much pleasure now and into the mid-term.  13%  £21.95 at Noel Young Wines