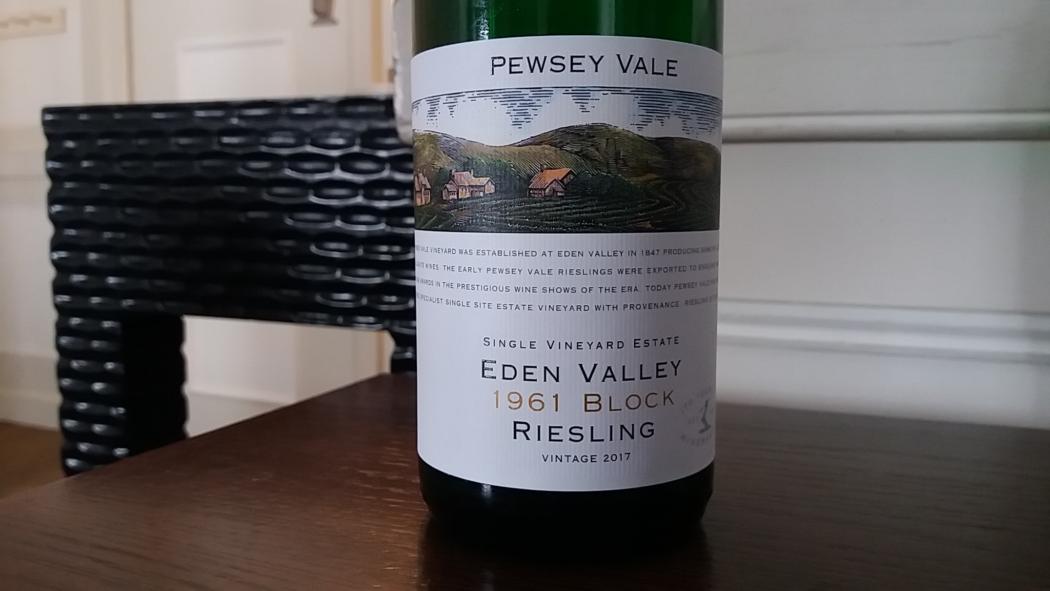 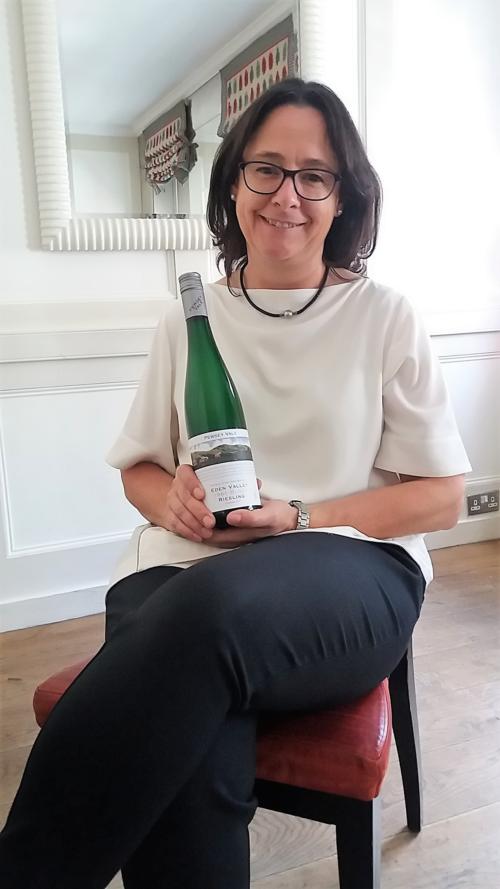 Eight years ago, I enjoyed my first taste of Pewsey Vale Riesling 1982.  A marvel, which had been sealed under screwcap with a cork liner.  The liner knew its place.  Last week, Chief Winemaker Louisa Rose was in town to showcase Pewsey Vale 1961 Block Riesling 2017, a new release to mark the 170th anniversary of this iconic Eden valley vineyard.

Shown in a celebratory vertical, I had my second bite at the cherry with the 1982 (this one all screwcap, no cork) and marvelled again – it’s still gliding seamlessly along!   As Rose put it, under screwcap, these wines develop classic tertiary notes of lime marmalade, toast and honey, then plateau.

My tasting notes on last week’s tasting, including the Pewsey Vale 1961 Block Riesling 2017 and second-time-around 1982 Pewsey Riesling will be published online at Decanter Premium shortly [UPDATE: since published here], so I’m keeping my powder dry here.  But I would encourage you to seek out Pewsey Vale 1961 Block Riesling 2017.  Its very specific (hot spot) terroir, old vines (Pewsey’s oldest) wild ferment and lees-ageing distinguish it from the rest of the range, playing into this vineyard’s softer (for Australian dry Riesling) acid profile.  And, like Australian Riesling in general, bang for buck is right up there.  I’m told it will retail for around £20. 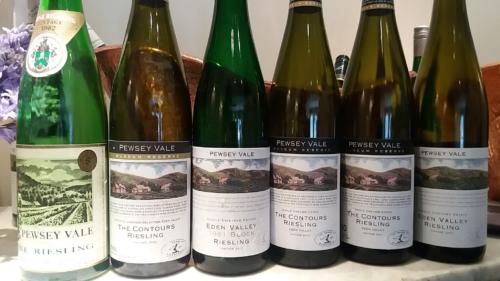 In today’s retro-post, you can read about my first taste of the 1982, which features tasting notes on Pewsey Vale and Jim Barry Rieslings from the 1960s, 70s, 80s, 90s and noughties.  Originally published on 25 May 2010, it reports on an Eden Valley -v- Clare Valley Riesling tasting hosted by Robert Hill-Smith and Peter Barry.  Expect those wines from the noughties – all sealed under screwcap – to be seamlessly gliding along right now!

And for more Aussie Riesling, click here for over 50 personal recommendations from February’s Riesling Riot in Melbourne.  An event which suggested the so-called “Savalanche” has abated somewhat since 2010.

Joking he wasn’t sure there’d be a waiting list to taste old Australian Riesling back home given the so-called “Savalanche” (NZ Sauvignon Blanc has taken Australia by storm), Hill Smith prompted Barry to quip “you could plant other [fashionable] varieties, but then you’d have to drink them…” I couldn’t agree more – Pinot Grigio and Sauvignon Blanc just don’t cut the mustard compared with Riesling or Semillon for that matter. Bone dry as Peter Barry’s wit, mouthwatering young Aussie Riesling will bring a smile to your lips in this hot spell we’re enjoying right now.  Give it some bottle age and it really pays dividends, as you’ll see from my tasting notes below. Pewsey Vale, Eden Valley’s first vineyard, was planted in 1847 by Englishman Joseph Gilbert on the crown and highest slopes of Residence Hill, open to all aspects.  An elevation of 450-500 metres and gully breezes account for a long ripening period which extends well into autumn. Very shallow poor topsoils over shale, granite and semi-volcanic rock limit vigour.  Climate and soil combine to  allow the grapes steadily to accumulate flavour while retaining high natural acidity, resulting in wines of great intensity and balance.  Ebenezer Ward’s 1861 tome “The Vineyards and Orchards of South Australia” documents how Pewsey Vale’s Riesling swiftly made its mark:

“We may mention that a short time since a number of gentlemen – all experienced wine connoisseurs – met together in Adelaide, for the purpose of testing the relative merits of this same Riesling (of the vintage of 1854 we think) and some choice Hock, considered to be the best wine of its class ever imported to this colony.  The decision was in favour of the colonial product.”

The Great Depression of the 1920s ended Pewsey Vale’s first era of greatness.  The second began in 1961 when Geoffrey Angas Parsons persuaded Robert Hill Smith’s father Wyndham (of Yalumba fame) to take restore the vineyard. Hill-Smith replanted 25 hectares of Riesling of the orginal Pewsey Vale clone in contoured rows between 1961-65.  Today, these vines have been augmented by another 25 hectares of Riesling, planted between 1986-89 and 2000-2002 (mostly propagated from cuttings from the 1960’s plantings).

Since 1995, the South facing, cooler Contours block comprising the oldest vines has been vinified as a single parcel.  Early bottled in the year of vintage, it’s released as a five year old wine under the label “Pewsey Vale The Contours Riesling”.  For Hill Smith, it makes absolute sense to make a single vineyard, indeed single parcel, wine “because Riesling is the most pure expression of terroir today – we’re letting nature run its course with wild ferments – certainly, we control temperature, but there’s no other manipulation.  The only variation is vintage variation.” In fact the other variation much talked about during the session was the closure – cork or screwcap, a debate that I’ve touched on at the close of this piece.

Pewsey Vale The Contours Vineyard Riesling 2004 (screwcap) – pale, with green glints and a bath salts nose – quite floral with a lime/lemon undertow.  In the mouth, despite its relatively broad mouthfeel, it’s youthful, almost to the point of being sullen, especially in comparison with the 99.  I expect this is a sleeper  – promising.  Total Acid 7.7 g/l, Alc/Vol 13%, pH 3.04.

The vintage – after an unexpectedly cool January, a heat spike in February induced the flavour ripening phase, which was then exceptionally slow as a result of a relatively mild late February, March and April.  According to Hill Smith “acid refused to drop,” so the Riesling was picked later than usual on 6th April.

Pewsey Vale The Contours Vineyard Riesling 1999 (screwcap) – still youthful pallour with green glints, but way more expressive than the 2004 and showing some development with lemon butter as well as tighter/fresher pithy grapefruit on the nose.  The palate has a delicious, mouthwatering steely grapefruit core with a sweet lime cordial edge.  Lovely, long, persistent and fine.  Excellent –  my favourite wine of the tasting. ABV 12.5%, Total Acid 6.8 g/l, pH 3, Residual Sugar 2.8 g/L

The vintage – warm and dry; fruit was harvested on 25 March.

Pewsey Vale Vineyard Riesling 1982 (screwcap with a cork lining!?!!?) – a very deep gold, initially with a moldy orange note, though it opens up to show lemon butter and, in the mouth, seamlessly combines the lemon butter with a lively thread of acidity.   Long with developed floral notes (pot pourri) on the finish.  Good.

Pewsey Vale Vineyard Riesling 1971 (cork) – deep gold with a much quieter, dull nose, this has a pronounced oxidative note so, although it retains classic citrus and lemon butter characterstics, it lacks depth and finishes angular, even a tad bitter (as in why didn’t you screwcap me?!?!?).  Anyway, (this particular bottle?) out of condition/past it.

Pewsey Vale Vineyard Riesling 1967 (cork) – Hill Smith made no great claims for these older wines which did not benefit from modern protective winemaking methods. Rather, this wine would have been handpicked during the day (as opposed to in the cool of night/early morning) and vinified in open fermenters, which explains the phenolic/vegetal character.  Nonetheless, it retains admirable freshness, so a testament to the ageing capacity of Eden Valley Riesling.  For Hill Smith those later vintages, which have the advantage of being picked cooler, made protectively and bottled under screwcap, will age better and achieve his idyll for Riesling – “length of flavour without tending to broadness or coarseness.” Lodge Hill (purchased in 1977) – situated on the eastern ranges of the township of Clare at 480m, it’s one of Clare Valley’s highest vineyards.  The Riesling is planted on shallow brown loam over a layer of clay and 900 million year old slate bedrock (apparently great not just for Riesling but also pool tables!)

The Florita (purchased in 1986) – located on Watervale’s famous (younger) limestone soils, this is one of Clare Valley’s oldest Riesling vineyards.  It was the source of Leo Buring’s iconic 1960s and 70s Rieslings, made by John Vickery.  (The Florita brand came into being in 2004 when Barry acquired the trademark; it comprises the vineyard’s best parcels from individual rows where the terra rossa and loam barely cover the deep limestone).

The harvest: nearly 4 inches of rain 12-14 December 2008 produced healthy canopies which proved handy over a dry summer with a two week heat wave in January-February.  Temperatures then returned to their previous lower than average pattern and this cool, elevated site was harvested in April. (For more on this challenging but ultimately rewarding vintage, see Tyson Stelzer’s piece for Decanter here).

Jim Barry The Florita Riesling 2004 (screwcap) – a powerful nose with pink grapefruit sorbet and, with 5 more years under its belt, an impression of greater “sweetness” on nose and palate.  Still, it’s very fine in the mouth, the pink grapefruit accompanied by lime, (spicy) kaffir lime, the finish, subtle pithy, textured and long.  For Barry, who notes the Riesling had 10% more natural acid in 2004 than 2009, it has a talc spectrum from the limestone. Very good/excellent.  Alc Vol: 13.0%, Total Acid: 7.4, pH: 2.99, Residual Sugar: 0.7 g/l

Jim Barry The Lodge Hill Riesling 1999 (screwcap) – much more evolved in hue (golden) and on the palate which is significantly broader than the Pewsey Contours 99, showing lemon butter, though still very limey underneath.  Its minerality is quite different from the 2004 Lodge Hill – more pebbly/stony than slatey.  Medium finish.  Good.

PB: Acid is the backbone of Riesling  – it’s very important to retain freshness so Riesling needs cold.  Clare and Eden Valley’s common factor is elevation, which results in cold nights.  As soon as the sun goes down there’s no cloud cover, so the day’s heat is not trapped (unlike in a maritime climate).  In Clare Valley (60 km from the sea), westerly and southerly breezes are cooling too.

How can you tell Clare and Eden Valley apart?

RHS: “Eden Valley wines are slightly lower in total acid [than Clare Valley] but have very high natural acidity and a low, low pH. They have a talc character with strong citrus fruit – in warmer years at the tropical end, in cooler years, tighter grapefruit, lemon and lime.

PB: Clare Valley wines have a lower pH and acids and tend to be more open earlier, but you have to take account of sub-regional variations – this is a generalisation.

A bit of contradiction there.  This is what Louisa Rose, Pewsey’s winemaker said when I visited her during a two week Riesling focused trip in 2008 (see my report here):Clare Valley’s total acidity is higher but the pH is not as low as Eden Valley.  This tends to mean that Clare Valley wines have punchier acidity and Eden Valley wines have a finer spine of minerally acidity.

How does Riesling age?

RHS: Five years on, they develop into fuller bodied expressions, with buttered toast and marmalade, even under screwcap.  With older wines bottled under cork, there are issues about freshness.

PB: They develop more texture.  When young, the focus is on minerality and fruit.”

Do wines evolve differently under screwcap?

PB: Oxygen doesn’t improve Riesling; corked wines tend to be duller and Riesling is really affected. The wonderful thing about screwcaps is that the wines look really good all the way through their life cycle, whereas under cork, at 3-4 years old, wines used to go into a trough.