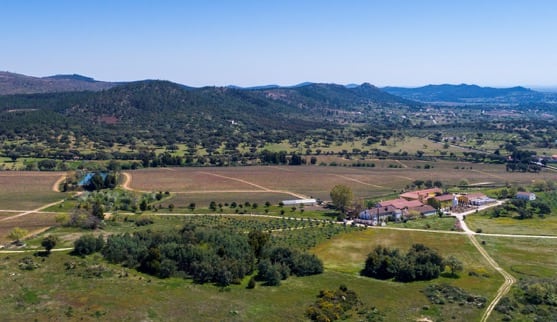 The Symingtons go to Portalegre; and some Port news

It’s that time of year when you might expect press releases about Vintage Port declarations to hit the inbox.  The Symingtons have duly obliged, declaring Cockburn’s Vintage Port 2015 and, this week, announcing a second release of Graham’s Stone Terraces 2015 Vintage Port (the first was the excellent 2011, reviewed here).  Rather more surprising was a press release about the Symington’s acquisition of a sizable 207-hectare estate – Altas Quintas – in Portalegre, Alentejo.

Not because I don’t rate the sub-region.  Quite the contrary.  For some years I’ve been raving about its potential given its excellent (and unusual for Alentejo) combination of a cooler, wetter climate, granitic soils and old field blend vineyards.  A potential which, since my first visit in 2009, is being realised to impressive effect by talented boutique and artisanal producers like Rui Reguinga (Terrenus and Sonho Lusitano), João Afonso ( Cabeças do Reguengo), Vitor Claro (Dominó), Susana Esteban (whose Sidecar label has seen exciting collaborations with Dirk Niepoort and Filipa Pato & William Wouters) and Jorge Rosa Santos & Filhos (Explicit).

On my recent visit this January, it was exciting also to taste older wines from Tapada do Chaves (the 1977 red was awesome) and Adega Portalegre.

The Symingtons are not the only big player to eye up Portalegre.  Take Esporão, who have been active there for some time now (and own vineyards there).  Fruit which is providing a desirable freshness to Alentejo blends and which also produced their lovely Talha red from 100% Portalegre fruit.  According to the press release “the Symington family have been searching for a fine vineyard in the Alentejo, and were increasingly drawn to this area by the soils [schist and granite], the areas temperate climate and the rapidly increasing quality of the wines being made here.”

I’ll be following up on this story but, as I recall from my 2009 visit, Altas Quintas had no old field blend vineyards (one of my magic ingredients), though the vines are mature.  Doubtless the Symingtons will bring their vast experience of mountain viticulture to their new 43 hectare vineyard.  It is located at 490 to 550m, roughly halfway up the Serra São Mamede.  According to the press release, the family have not bought any existing stock.  Preferring to start from scratch, Rupert Symington said the plan is to “make some exciting and interesting wines here.’ Watch this space!  And on those 2015 Vintage Ports.