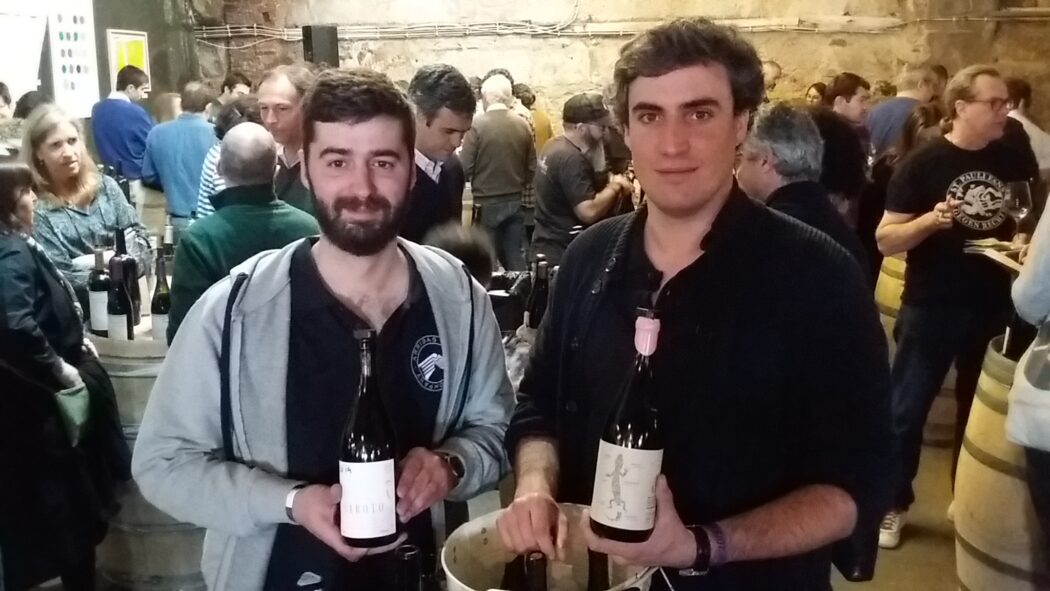 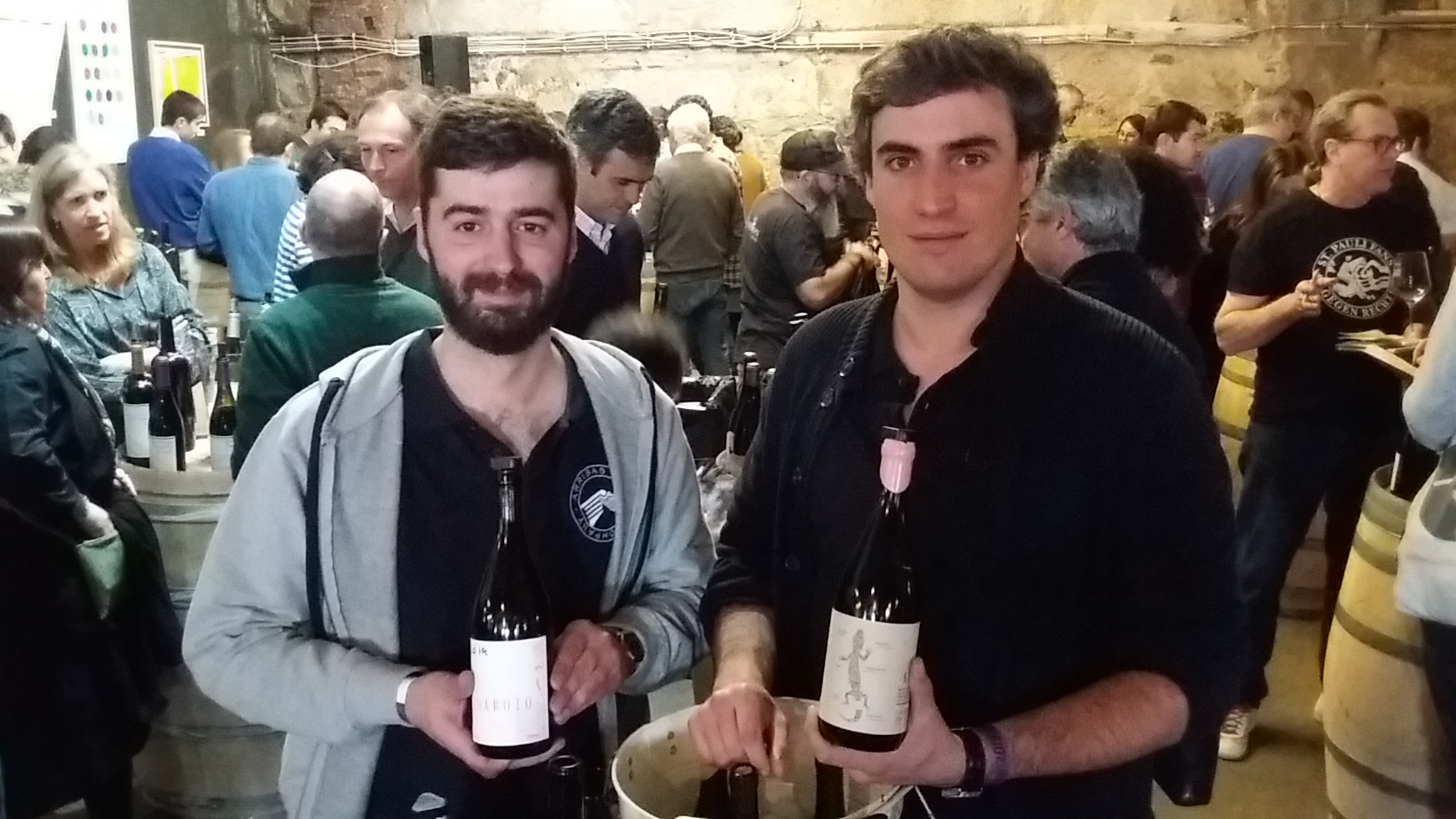 As readers know, Simplesmente Vinho is a project dear to my heart.  It is a very special wine fair, founded by winemakers for winemakers, with the aim of showcasing Portugal’s vibrant artisanal and boutique scene.  The concentration of micro-negociants, vignerons and natural/low intervention winemakers makes for a dynamic, super-interesting tasting, where I always make exciting new discoveries.  Another great strength of Simplesmente Vinho is that wines are generally shown by their makers.

In this post, I focus on my pick of this year’s new-to-me producers, all of whom showed great skill and dedication to their craft.  They are also part of a growing movement in Portugal which, breaking new (old) ground, specifically terroir, is introducing even greater singularity to this country’s much (and rightfully) touted ‘World of Difference.

Pedro Marques of Vale da Capucha opened a bottle of Arribas Wine Company Saroto Red 2017 – the debut vintage – over dinner, when I visited him following last year’s Simplesmente Vinho.  It was the first Trás-os-montes red wine I’ve tasted that had an old vine character, delivered with freshness and great drinkability, so the producer was top of my list of pipas to visit this year.  I was not disappointed.

Frederico Machado and Ricardo Alves are the young guns behind Arribas Wine Company which, reading between the lines, is so-called because they feel a greater connection to the Spanish DOC of Arribes than Trás-os-montes, which allows producers to vinify non-local and international grapes.  Rather, they are intensely passionate about the old field blend vineyards, planted to native grapes which they discovered in 2017, in the village of Bemposta.  Machado’s grandparents are from the village but, ironically, the potential of Bemposta’s old vineyards failed to register with the globe-trotter until he stumbled across them following a party in the village.

Teaming up with Alves, the pair – micro-negociants, who buy grapes – have swiftly extended operations beyond Bemposta, which has no white wine vineyards.  I sensed a keenness, hunger even, to explore the different soils, altitudes, aspects and grapes and, with different (minimal intervention) techniques, seek to showcase the vineyards round and about Bemposta.  And keep doing better by doing (they made 9 wines in 2019).  Tellingly, it wasn’t long before Alves and Machado hooked up with ever astute talent spotter, Dirk Niepoort.  In addition to making a wine under Niepoort’s Nat Cool label, they have collaborated on a cuvee with a caricature of the curly-haired one in his signature khaki gilet.

Arribas Wine Company Saroto White 2018, the maiden white wine, was sourced from 60 year old vineyards.  It is a field blend featuring Malvasia Fina, Codega, Bastardo Branco and Rabigato among other varieties.  The grapes were foot trodden in lagar and the juice macerated on skins for 2 days, before pressing and transferring it directly to used French oak barrels to ferment naturally (alcoholic and malolactic fermentation), without temperature control. The wine spent 7 months in barrel on lees for 7 months.  It is a sapid wine, very fresh, with an attractive green edge, sappy acidity and nice minerality.  With just 10.5%, it is light-bodied, but no less intense for that.  It doesn’t taste mean.  Very good.  In 2019, vintage issues led to a change of grape source.

Arribas Wine Company Saroto White 2019 comes from 50 year old field blend vines, with a different varietal emphasis.  This much I can tell from my scrawl (I was running out of notebook), but I can’t be sure of the varieties, so I’d rather not get into particulars! This vintage was foot-trodden and pressed after 4 days skin contact; it was aged in French oak barrqiues, with 30% new oak.  In a more stable vintage, this is a more powerful white, with pronounced, stony minerality and an attractive bitter (quinine) edge.  Very good.

Arribas Wine Company Palhete 2019 – a 50:50 red:white blend pressed direct to barrel, is a pale blush pink and, similarly, has striking minerality; it lacked a bit of animation on this tasting, but being so young, it is one to review.

Whilst 2017 was a very early, hot, dry year, in 2018, Alves told me the Saroto red was picked a little later, with more phenolic ripeness.  The grapes for Arribas Wine Company Saroto Red 2018 come from a 2ha old field blend vineyard in Bemposta with 70:30 red:white grapes, including Tinta Gorda, Tinta Serrana, Rufete, Alvarelhão, Bastardo, Malvasia, Verdelho, Verdelho Vermelho, Bastardo Branco, Formosa and Posto Branco. Foot trodden for five days in lagar, it was fermented at a colder temperature/more slowly than the 2017, then aged for 8 months in neutral French oak.  Striking florality, with rose petals to nose and petals, deep-seated blackcurranty fruit, vibrant, fresh acidity and a pick of tannin.  It has a raw, very hands off appeal, letting the fruit, tannin and acid do the talking.  Arribas Wine Company Saroto Red 2019 is from steep, south-facing vineyards in Almança at 700m with quartz.  I really enjoyed its energy.  Lively, intense and persistent, with crunchy red and black fruits, hints of earth and a rub of spicy fruit tannins.  The best of the 3 vintages, I reckon.

Arribas Wine Company Nat Cool Saroto Red 2018 was, “by accident,” said Alves, a single vineyard wine.  Just 500 (1 litre) bottles were made.  Although it is a little jammy, the jamminess is off-set by mineral-sluiced acidity, grainy tannins and a savoury lick of balsamic/dried herbs.  12%  Arribas Wine Company Nat Cool Saroto Red 2019, a blend of different vineyards, incorporates 10-15% of white grapes, was foot trodden for 2-3 days and more of the wine was aged in tank.  I could have sworn there was an element of carbonic maceration, but apparently not.  It nails the Nat Cool brief more firmly, being more lifted, lighter, fresher (no jamminess), with juicy bright, well-defined berry fruit and floral notes.

Arribas Wine Company Quilometro 2019 is a field blend from two old vineyards located very close to a bend in the Douro river – a warmer location.  Harvested at 12% potential alcohol, the grapes were foot trodden and spent 4-5 days in lagar.  This wine comprises just the free run, which was aged in old barrels.  It is delicate, very pretty, as one might expect from a free run red, but with nice intensity, juicy persistence and a minerality.

Arribas Wine Company Manicomio 2019 is, like Susana Esteban’s Sidecar label, a collaborative effort – this, the first vintage made with Dirk Niepoort.  With Burgundy’s Philippe Pacalet in mind, Alves and Machado planned how to make it, said Alves, with carbonic maceration and a month of infusion on skins (not working the grapes). Niepoort tasted the 50:50 red:white wine in tank and I can see why this aromatic, pretty wine appealed.  It has delicate talcy, musky, floral and spice lift with a super subtle pick of striated tannins, making for a gentle interplay of tannin, juice and fresh from tip to animated toe.  The fruit, fresh but soft and creamy – with a pureed character and lavender and mineral notes.  Lovely.

Last(!), Arribas Wine Company Raiola 2019, named after a board game, is from red grapes from the same source as Nat Cool, but picked later (at 12.5-13% potential alcohol).  It was foot-stomped in 10 barrels, 1 new and blended with the press wine from Quilometro.  Correspondingly, it’s a deep hue, with grippier tannins and markedly blacker fruit.  Good to see the different approaches.  A project and a region with huge potential.   Great work!  Leading Portuguese specialist Raymond Reynolds will be importing them. 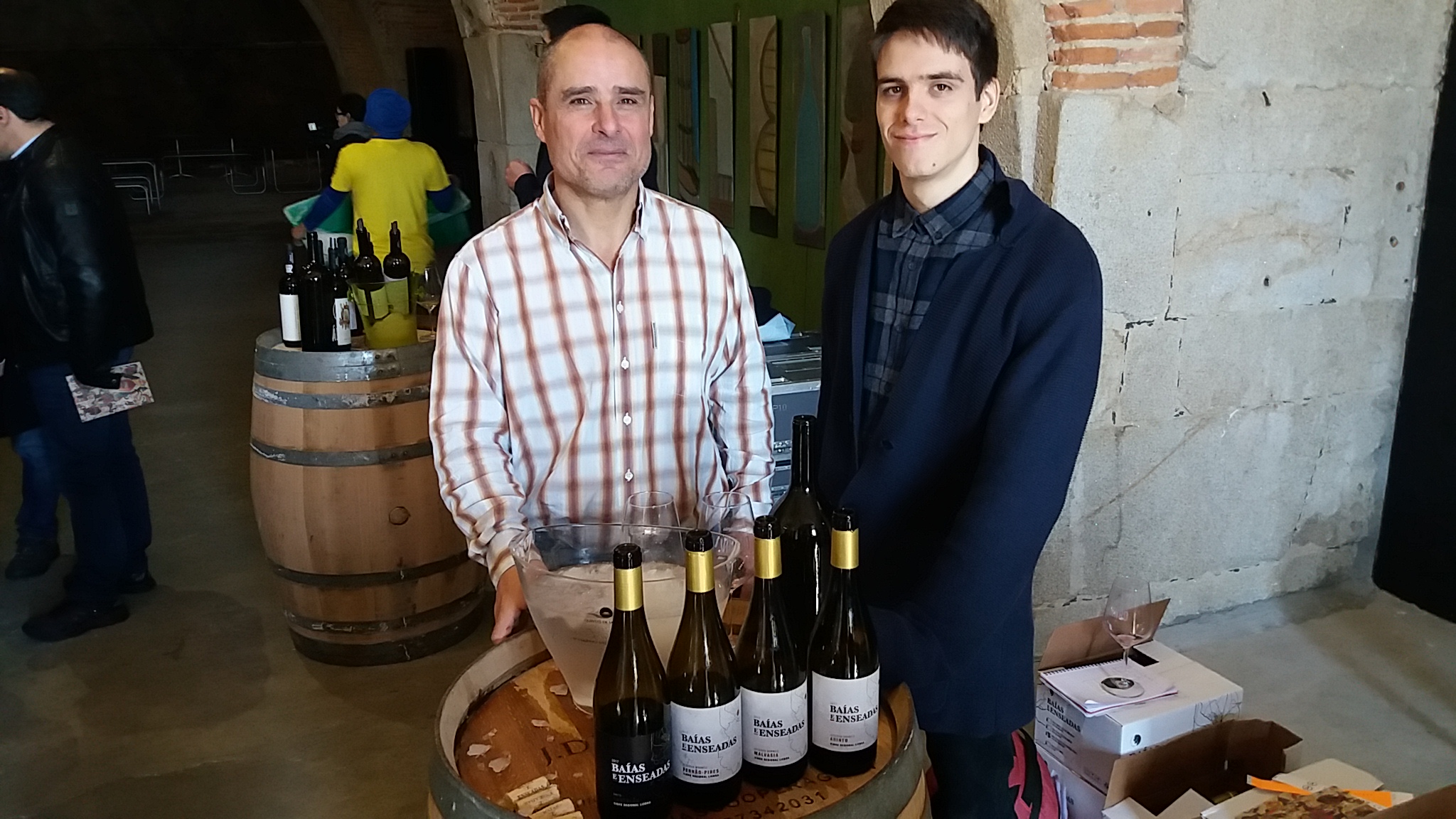 Daniel Afonso of Baías e Enseadas told me that he didn’t like wine at all 20 years ago.  But once bitten by the wine bug it would appear he was unstoppable.  He co-founded a wine bar in Lisbon – Wine bar do Castelo, which his partner now runs, since Afonso is now besotted with the vineyards he planted in 2013 and 2014.

Located in the Colares area, in Sintra, being on clay-limestone soils, not sand over clay, means his wines are classified VR Lisboa, not DOC Colares.  But I think the close proximity to the ocean (3-5km) and his passion and knowledge about wine shine in his sophisticated white wines in particular.  In fact, I discovered that they have already been snapped up by Raeburn Fine Wine in the UK.

Baías e Enseadas Malvasia de Colares 2017 is really salty and bosky/briney, with vegetal nuances, hints of iodine and, I guess, thanks to the clay and nifty use of lees and batonnage, rounder than a classic Colares DOC example.  Really characterful and nuanced, with lovely texture.  in whites and Castelão in reds, in order to preserve the region’s identity; 13%.

Baías e Enseadas Castelão 2017 is pale, bright ruby in hue and was picked in mid-October at just 12% abv.  It is relatively simple compared with the whites, but none the less enjoyable, with strawberry fruit, nice freshness and signature salinity.  Perhaps highlighting trends, Afonso told me that the red is sold out, but the whites have still to sell.  Jump on them folks! 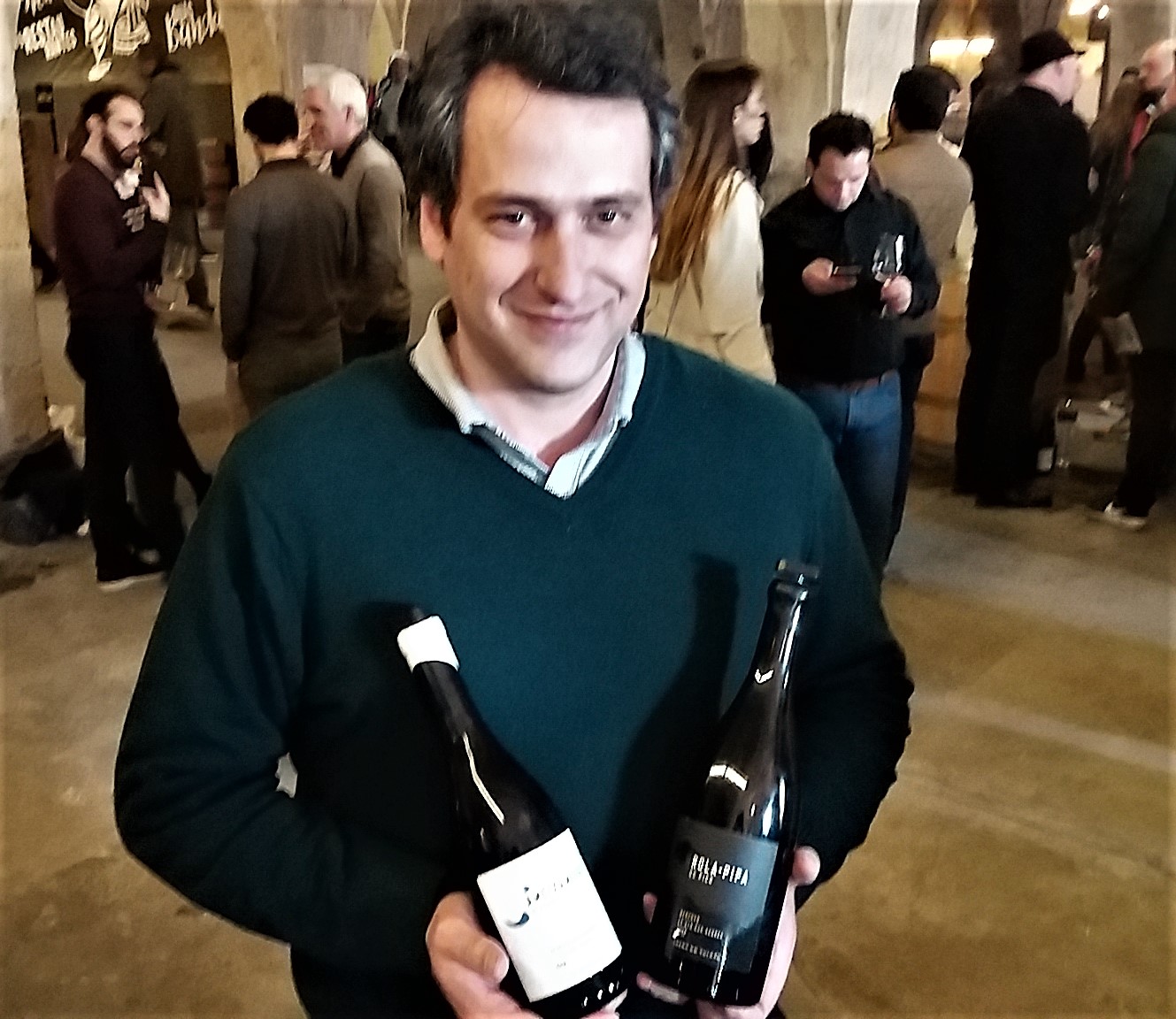 Well, well.  Readers know how very excited I am by developments in the Azores, and here’s another one (one of two at Simplesmente Vinho this year).Adega do Vulcão was founded in 2015 by Rodolfo Silva. It took me by surprise, because Silva is making a cuvee from Faial which, located across a narrow strait from Pico island, was historically home to the owners of Pico’s vineyards.  They commercialised Pico’s wines, shipping them across the Atlantic, since Faial boasted the best harbour in the Azores.  I didn’t know Faial itself produced any wine of note.

But it makes sense that it can now, almost a century after oidium and phylloxera killed said trans-atlantic trade.  Why?  Because the eruption of Vulcão dos Capelinhos in the 1950s created a lava field, hence the poor basalt ‘soils’ in which Pico’s and Terceira’s Biscoitos vines thrive.

Silva, who is from a technical engineering background, planted the 7ha vineyard in Faial five years ago. Being virgin land, there are no currais, so the vineyard is grassed and surrounded by trees to mitigate erosion.  Stitched together from parcels which previously belonged to 62 different owners provides an indication of Silva’s doggedness.

The engineer turned vigneron conducted soil studies with the help of the University of Azores and believes Faial could have a spectacular future for wine. Renowned Italian winemaker Alberto Antonini (a friend), shares Silva’s optimism about Adega do Vulcão and the engineer turned vigneron has heavily invested in making a go of the project, additionally working with 3 hectares on Pico.  He is keen to buy old vineyards there.

The wines are very different from those made by the Azores Wine Company.  More shapely/textural, less racy – ‘slow wines,’ if you like, that take their time, but leave a lasting impression.   Adega do Vulcão Ameixâmbar Arinto dos Açores 2018 (Faial) is bone dry, but quite fat in the mouth, with great texture and a lingering, shimmering, salty minerality. It was my pick of the two.  From, observed Silva, a less good year, Adega do Vulcão Rola Pipa do Pico 2017 from Pico is similarly textural, long and shapely in the mouth, with a markedly savoury, darker ‘basalt’/whetstone (not crystalline) minerality and a nutty edge.