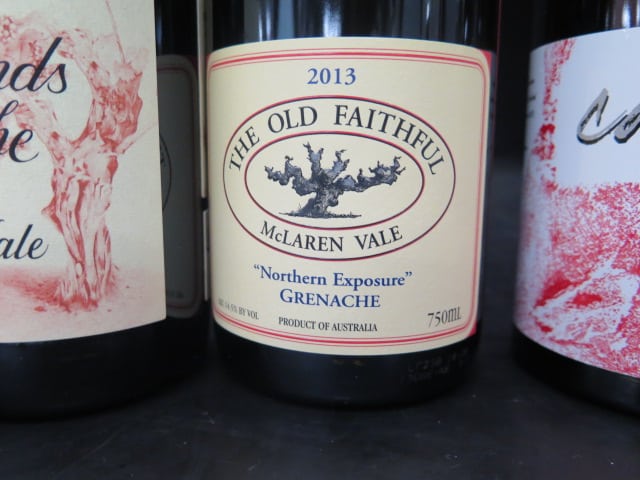 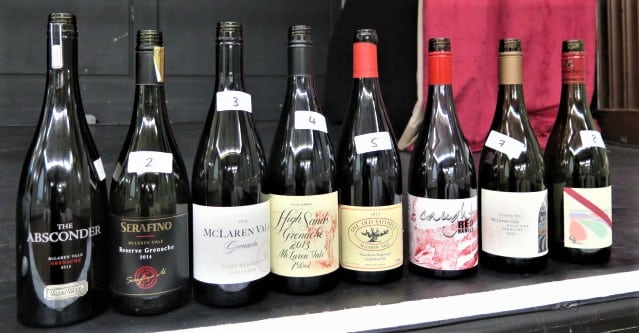 It was good to see that the McLaren Vale Grenaches I presented at last month’s Australia Day Tasting generated plenty of discussion about this grape.  Dropping me a line afterwards, Wine Australia’s Emma Symington MW pondered “will 2017 be the year of Grenache!?”  The drinkability of new wave (less extracted, less oaky) examples certainly makes it a flavour du jour.

Wines I’d showed at a previous tasting at London Wine Fair last year impressed once again – Bekkers Grenache 2013 (a weighty but refined Grenache), Wirra Wirra’s finely honed, crunchy The Absconder (this time the 2015) and Chapel Hill Grenache (this time the older, more savoury 2010, which was in great form).

Of the newbies (to me) in the line up, I’ve written up a fine pair of single vineyard Grenaches which reflect the diversity of styles which McLaren Vale produces –  a point which my audience remarked upon.  There’s a nice quote on this topic in this post I wrote for Wine Australia’s blog, together with a couple of observations from the audience about changing perceptions of McLaren Vale Grenache. 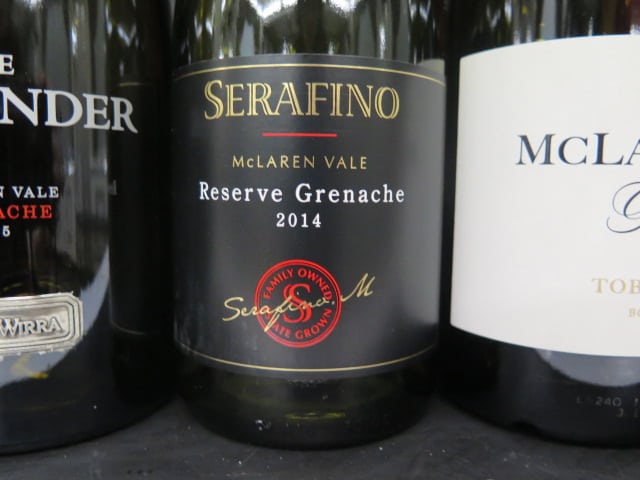 I’d tasted a Serafino Grenache when I spent a few days in McLaren Vale focusing on the variety in 2015, but not this release. Grenache is thriving once again in this South Australian region thanks to a combination of great terroir, old bush vines and a new found passion for the grape.  This is a really good example of perfumed, fresh Blewitt Springs Grenache.  It hails from 1930s’ bush vines planted at 168m on this sub-region’s deep sand soils with ironstone and clay layers.  The sand translates into the (old) spice and floral (violet) aromatics which adorn this sappy, fresh Grenache’s vibrant red and black cherry and raspberry fruit. Fresh acidity and sandpaper fine but tactile tannins keep its sweeter hints of turkish delight and strawberry cream soda firmly in check, making for a fresh, winsome Grenache with lovely immediacy to its fruit.  The alcohol is worn lightly.  Serafino Reserve Grenache 2014 was de-stemmed but not crushed (whole berry), so there was a touch of carbonic maceration.  It was aged in seasoned French oak 300l barrels.  A thoroughly modern Grenache.  14.5%

Nick Haselgrove juggles a number of brands, indeed two single vineyard Grenaches under the The Old Faithful label (when vintage permits).  The Old Faithful wines are small production “exceptional wines from older, exceptional single vineyards.” No idle boast because this Grenache bagged the McLaren Vale Winemakers Wine Show Grenache Trophy for the best two year and older Grenache.  It comes from another relatively elevated, cooler, northerly sub-region of McLaren Vale – Onkaparinga Gorge (sister wine Sandhill Grenache is from Blewitt Springs, which Haselgrove values for its a more aromatic expression).  Northern Exposure is planted at 200m to 80 year old bush vines on sandy soil over siltstone (Saddleworth Formation).  It spent considerably longer in barrel than any of the other wines – 40 months.  But in common with the rest of the line up, all the oak was used.   The nose is more considered than the Serafino – darker and deeper.  It draws you in to a plush palate, with fleshy plum, blackberry, raspberry and woody imperial leather sandalwood and star anise spices. Sinewy tannins and juicy acidity extend, frame and balance this wine well.  As it opened up over the couple of days I tasted it at home, it revealed more delicate violets, pithier grapefruit and crunchy cranberry notes.  A complex Grenache whose pulsing acidity lends animation and definition to its flavoursome, textural layers.  14.5%

You can read reports on the tasting here: